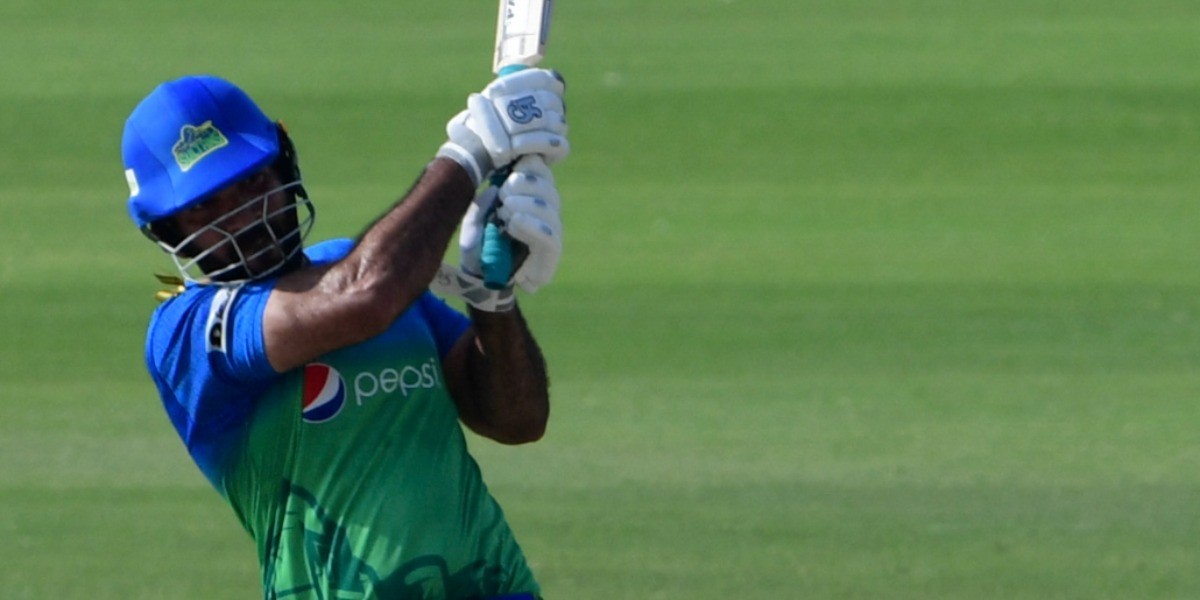 In a recent press conference, Pakistan head coach Misbah ul Haq had spoken about his new headaches with the squad selection for the upcoming limited-overs tour of England. Pakistan’s selectors finalised the squad on June 4, five days before the Pakistan Super League’s second leg had begun in Abu Dhabi. While admitting that he was tempted by the form of some players who will not travelling to the UK, he thought they had enough chances to prove themselves on the international stage.

“A few of the players' form is tempting and it appears like we are missing out but the major concern is their international performances. They all have had their chances and were picked up last year for their domestic performances but unfortunately, they couldn't translate it to the top level,” he said.

For Misbah, who won the T20 World Cup title in 2009, there are problems within the squad that need to be addressed when they play the world No.1 T20I side in preparation for the T20 World Cup later this year. Despite the emergence of players such as Babar Azam and Mohammad Rizwan, and the seemingly everlasting consistency of Mohammad Hafeez, Pakistan have had middling returns as a batting unit. Since the last World Cup in 2016, Pakistan’s run rate of 8.1 is amongst the lowest among the top 10 teams. 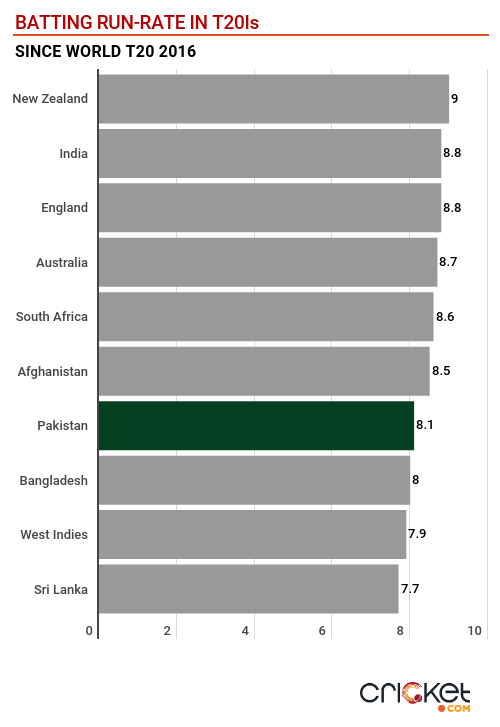 While some PSL top performers might be feeling hard done by the selection, here are some of the options that have much to prove before the T20 World Cup:

1 - Sohaib Maqsood had been left on the wayside by the Pakistan selection committee since 2016, but he has been presented with a new chance, hours before the PSL final after Haider Ali was dropped from the squad for breaching the bio-bubble. After suffering a glut of injuries, including a career-threatening wrist injury in 2015, Maqsood has definitely found his groove in the last two years. Since 2020, Maqsood has batted at a strike rate of 159.7 which is the highest among those Pakistan batsmen who have scored a minimum of 200 runs since 2020. He finished third highest run-scorer in Pakistan’s National T20 Cup 2020-21 with 393 runs from 12 innings and was ever consistent for PSL champion Multan Sultans with 428 runs from 12 matches, the third-highest in the sixth edition. 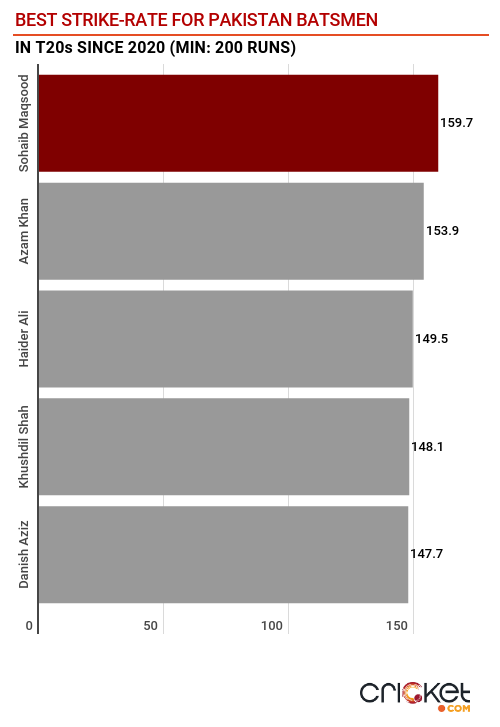 Maqsood had been vocal about his disinterest towards fitness in the earlier parts of his career but has clearly worked hard as he seems quicker between the wickets and can clear the boundary with ease. However, there is a catch to all of this. Maqsood is extremely effective only when he bats in the top-four. In the two innings when he batted at No. 5 for Multan, the 34-year old scored just four runs while he piled on 293 runs in seven matches at an average of 48.83 while batting No. 3. He had also opened once for Southern Punjab this season where he scored a fluent 81. With plenty of competition for the No. 3 slot, it will be interesting to see if Pakistan will play Maqsood in his preferred position.

2 - Faheem Ashraf has been a regular in Pakistan’s limited-overs set-up over the past three years, having played 15 T20s since 2020, but has rarely proven himself as a good performer with the bat. Despite featuring in the middle and lower middle-order Ashraf has had an opportunity to bat in 11 innings but only managed to reach double digits only thrice. He has also featured in five matches for Central Punjab in Pakistan’s National T20 Cup and managed to rake up 106 runs, including two fifties, at a fantastic strike rate of 207.8. However, his batting has dipped considerably in the recently-concluded PSL 2021 where he had the opportunity to bat in six off the eight matches he played for Islamabad United scoring just 77 runs at a strike rate of 120. Ashraf is also susceptible to swing as he had been dismissed six times to a moving ball which is a big issue in English conditions where the ball moves quite a bit.

3 - While there is no denying that Azam Khan has worked on his fitness over the last year or so, his performances with the bat have not been particularly encouraging. He is yet to score a fifty in T20s this year, but what has been impressive, is the rate at which he churns out his runs. Misbah hinted that Azam is one of the names Pakistan could try at five or six.

"I think it is that one slot we are trying to fill, at No. 5 and No. 6, that we've had issues with. We have Azam Khan now and Sohaib Maqsood with us to see if they can, and what combination we can make with them,” the Pakistan coach said.

While Azam might be a good fit at No 5 or six, he has been the most effective at No. 4, where he has scored 288 runs at 26.18 to go with a whopping strike rate of 181.1 since 2020. However, his numbers drop down significantly when he bats lower than that. But given that Mohammad Rizwan, Sharjeel Khan, Babar Azam and Mohammad Hafeez are preferred in the top four it could be difficult for someone like Azam to get a place there and will have to make do lower down the order when the opportunity arises. However, in the long run, he could be looked in as a potential top-four batsman. 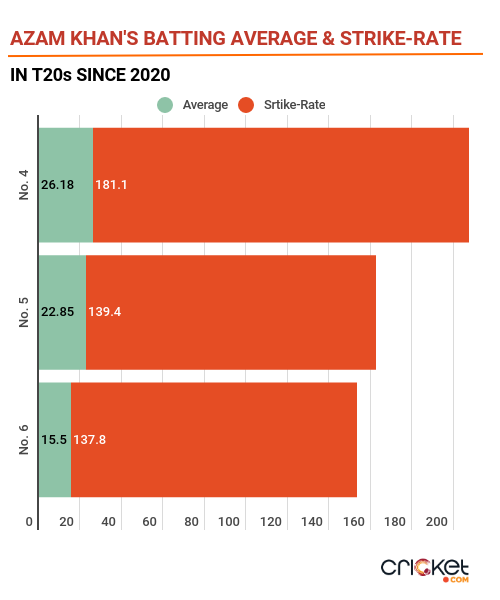 4 - While Shadab Khan has proved his prowess with the bat in the domestic T20 leagues, at the international level, he has not justified his talent. Shadab has batted just thrice at five, twice at six and five times at seven in T20Is for Pakistan, scoring a combined 107 runs from 94 deliveries.

While he had a torrid time in this edition of the PSL, scoring just 94 runs at a strike rate of 104.4 in nine innings, he could be a perfect addition for Pakistan for their No. 5 slot, given that he has scored 233 runs at 33.29 and a strike-rate of 144.7 in T20s since 2020. If Pakistan want consistency from Shadab, they need to play him at five. Playing him down the order may not see the all-rounder reach his full potential with the bat and be resigned to some ‘flash in the pan’ sort of knocks.

5 - Haider Ali has been earmarked as one for the future and at the age of just 20, he has already played 27 international matches for Pakistan but has not been able to pin down his place in the team. The tour of England would have been an ideal chance for him to prove himself. He scored a fifty on T20I debut at Old Trafford last year and in fact had two fifties from his first three innings.

Since then, things have gone downhill for him. In the most recent tours of South Africa and Zimbabwe, he was also given a chance at No. 5 and 6 after poor performances at No. 3, but he returned with scores of 14, 12, 3 and 5.

Haider will be the last resort to be tried at No. 5 and 6, given that he has not played many knocks in that position at the domestic circuit. Since 2020, he has played four innings in those positions and scored at a strike rate of over 178. However, Haider is someone who likes to take some time initially before he goes berserk. Hence, an opportunity in the top four would be ideal for him.