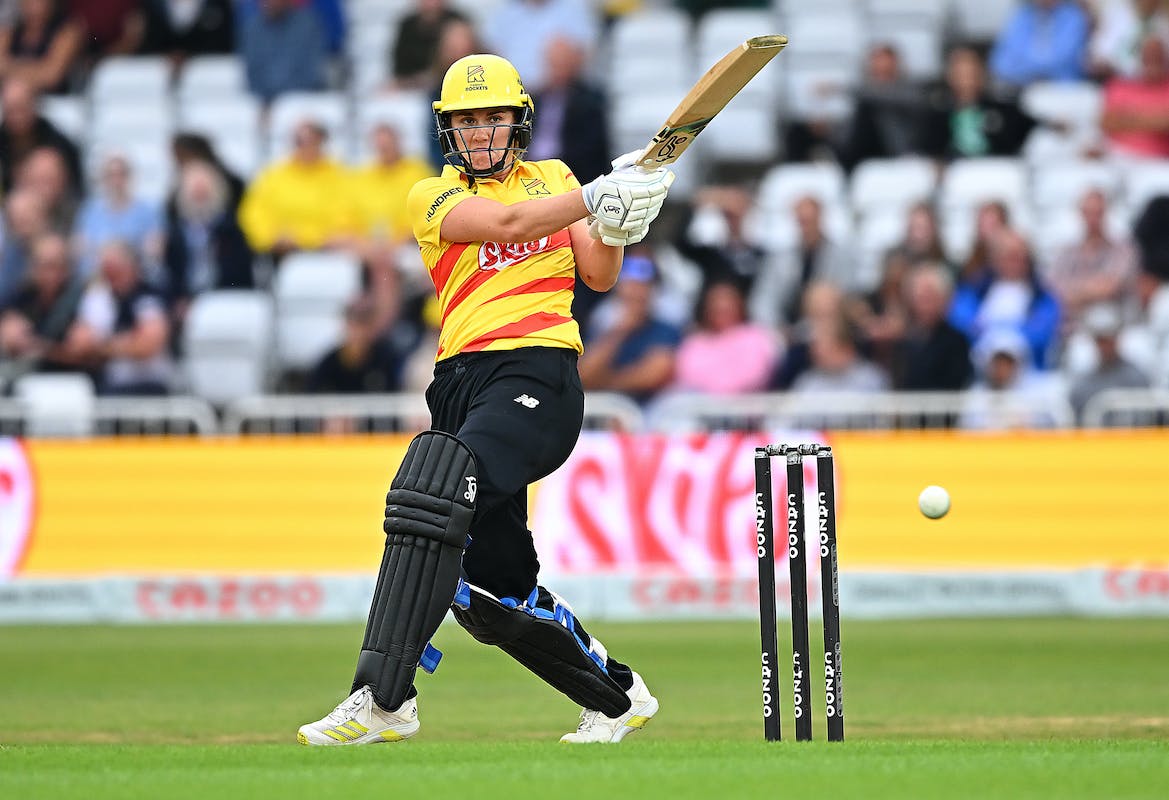 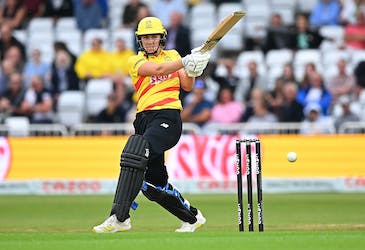 "The women's tournament was exceptional, and it goes from strength to strength."

In conversation with Sky Sports, Nasser Hussain was apt in his observation about the impact of the Hundred on the growing fanfare of women's sport.

While the tournament was truncated due to the inaugural edition of the Commonwealth Games, the 24 league matches and the two knockout games enthralled the fans to become one of the most talked about and watched tournaments in recent time.

With the extravaganza living up to all the hype and expectations of the fans, it provided plenty of jaw-dropping moments that will be etched in the memory of every cricket fan.

In the rematch of the summit clash of the inaugural season, Southern Brave and Oval Inviciblies locked horns at the Home of Cricket in front of a record crowd for a women's game in the United Kingdom.

And in a low-scoring thriller, Marizzane Kapp's all-around performance helped the Invincibles successfully defend their title and prove why they are head and shoulder above all the seven teams vying for the coveted trophy. 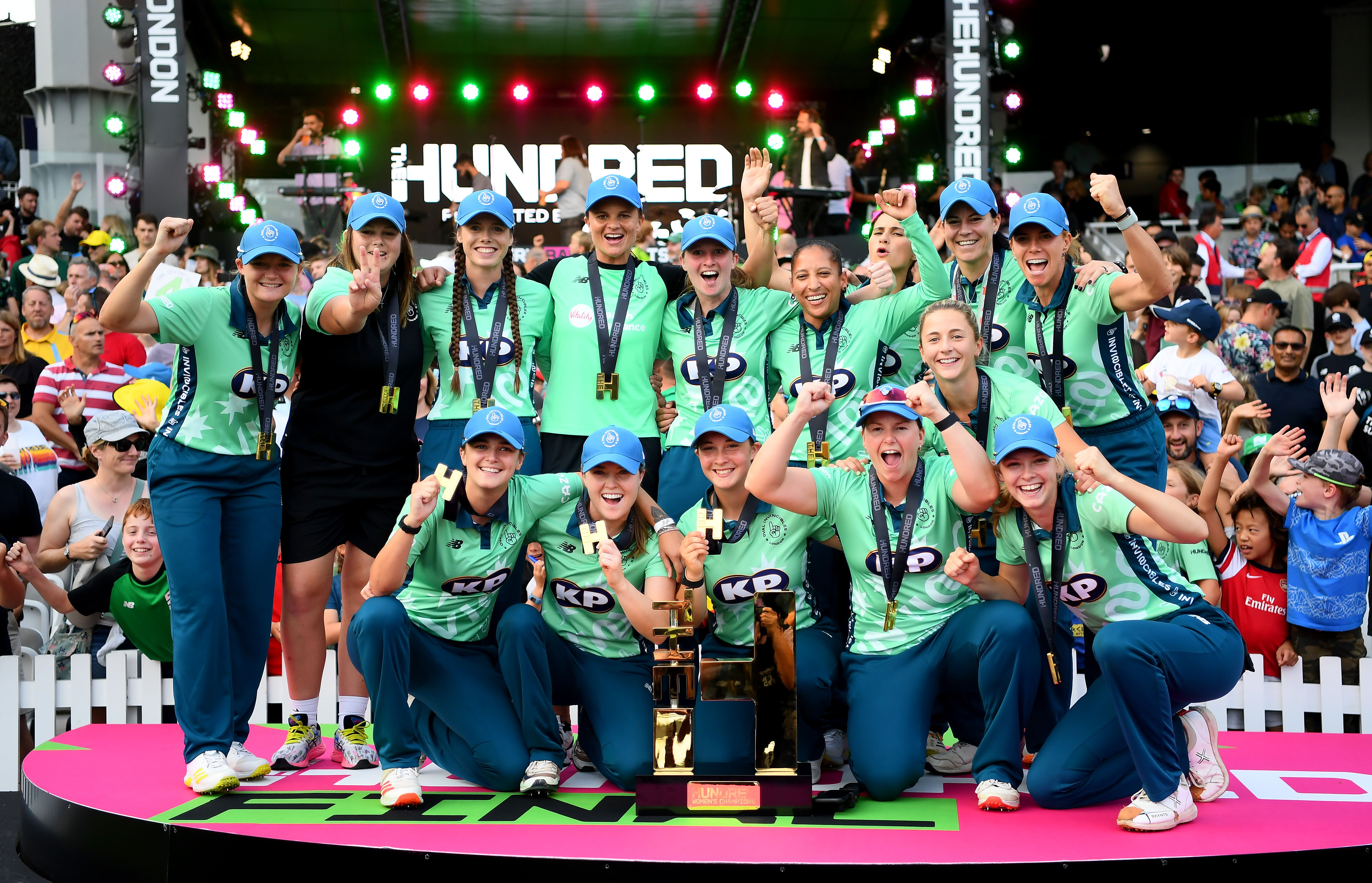 While the first half of the competition was about the Aussie dominance, with Ellyse Perry and Alana King lighting up the Hundred, the second phase was all about the individual brilliance of the international stars that sent social media into a frenzy.

We take a look at some of the top moments and the talking points from the second phase of the competition.

The Ageas Bowl in Southampton was set for a classic showdown between the Trent Rockets and Southern Brave for a place in the final. While the two sides have been consistent all through the competition, it was the battle of nerves between Australia's premier all-rounder and England's vice-captain that decided the fate of the clash.

After being asked to bat first, Brave scored 134 for 6 in their allotted quota of 100 balls, with Tahlia McGrath and Georgia Adams scoring 31 and 38, respectively.

While the total seemed to be achievable on a wicket conducive to batting, Rockets endured a middle-order collapse and were tottering at 88 for 6, with none of the batters from number four reaching double figures. 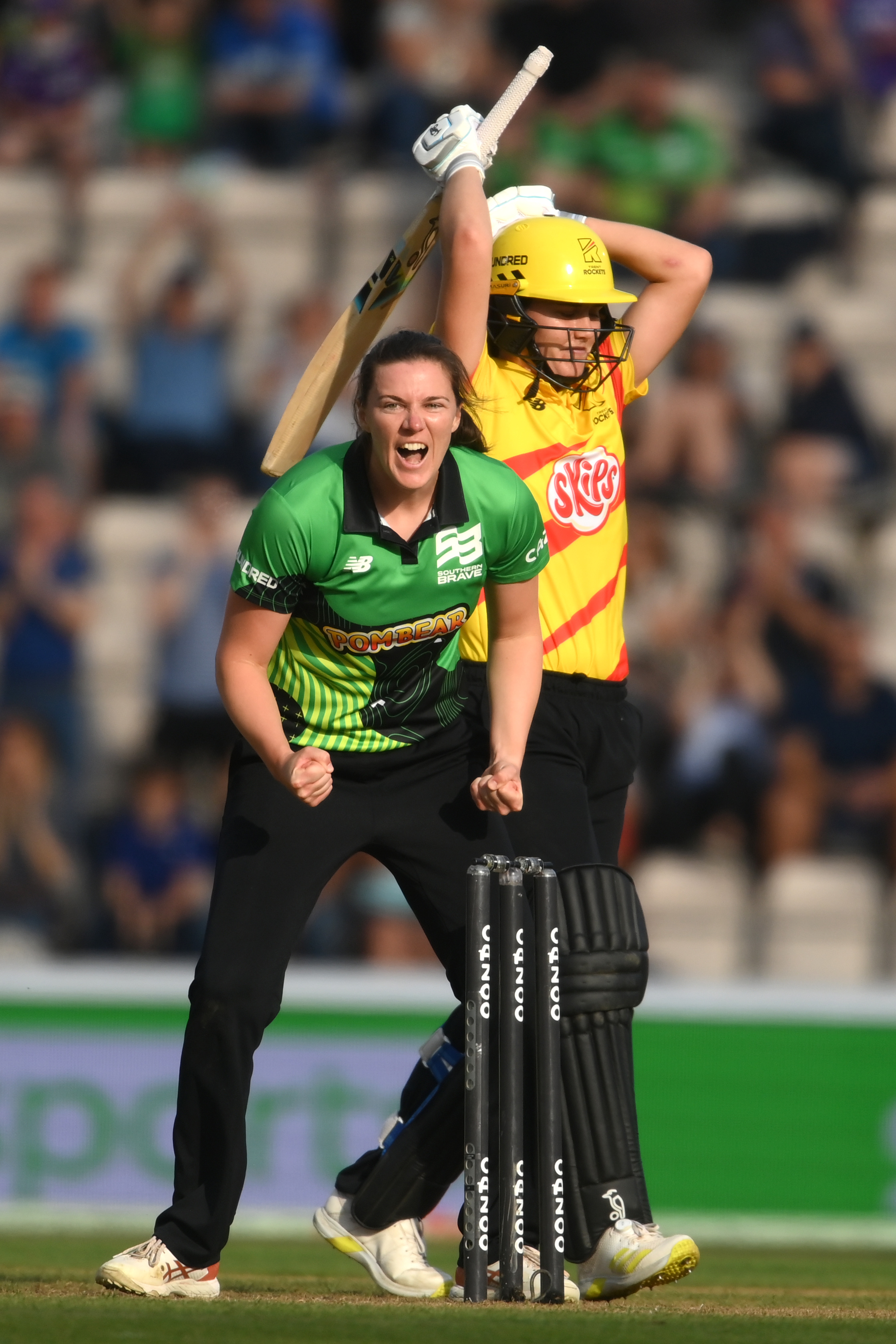 With their skipper Natalie Sciver holding fort at one end with a half-century, Rockets needed 28 off 10 deliveries with McGrath assigned the role of bowling the penultimate sets of five.

The right-arm pacer conceded only four of the first set and rightly stayed on for the final set, with Sciver needing 24 runs to power the Rockets over the line.

With a couple of the first delivery, Sciver smashed three consecutive sixes over the deep mid-wicket region to get the equation down to four off the final delivery.

If anybody could take the Rockets home after a dismal batting performance, it was Sciver, and she was standing between the Brave and the final.

However, after a long meeting between McGrath and Anya Shrubsole that felt like an eternity, the Aussie all-rounder held her nerve and delivered a perfect delivery under the bat that yielded only a solitary run.

It was agony for the Rockets and ecstasy for the Brave as they progressed through to the final with a win by two runs in a nail-biting thriller. Such was the impact of the Sciver onslaught that Kapp shared on her social media she would be happy to swap places for the England all-rounder in the summit clash.

With Jemimah Rodrigues out of the competition with a wrist injury and Deepti Sharma unable to break into the playing XI of Birmingham Pheonix, Smriti Mandhana was the only Indian player plying her trade in the Hundred.

There is something about left-handed batters in full flow, and on Match 17 against Trent Rockets, Ageas Bowl was in for a special treat as Mandhana made light work of an 89-run target set by the Rockets.

Opening the batting along with Danni Wyatt, the southpaw displayed an array of strokes all around the ground to smash an unbeaten 57 off 31 deliveries with nine boundaries and two massive hits over the fence.

The 26-year-old sealed the game with a six and powered Brave to an emphatic six-wicket win.

How did Devine pull that one off?

In a low-scoring thriller featuring the London Spirit and Birmingham Phoenix, Spirit held their nerve and recorded a four-wicket win to knock Phoenix out of the league in a do-or-die clash.

While the fans were dampened by lackluster batting from both sides, the fielding standard set by the two sides showcased the talent in women's sport and the direction the game is heading.

In the first innings, Alice Monaghan and Naomi Dattani teamed up at long-on to take a relay catch and dismiss Emily Arlott for seven runs and give the Spirits their eighth wicket of the innings.

A short of length delivery from Danielle Gibson and Arlott tried to clear the boundary ropes and gather some quick runs. While she got the elevation, she failed to get the distance and Dattani, running to her left, juggled with the ball before lobbing it to Monaghan.

This wasn't all, as Pheonix skipper too pulled off a blinder in the second innings as she dismissed Gibson for a duck on the last ball of the first set of five in the run chase.

Flighted delivery from Sophie Molineux and the right-handed batter tries to clear long-on but fails to get any timing onto the ball, with Devine running to her right pulls out a stunner over her head to dent the Spirits early in pursuit of 83 runs.

In the 13th match of the league phase, Manchester Originals were propelled to 160 for 3 courtesy of a blistering knock from Deandra Dottin.

The right-handed batter, who recently announced her shock retriment from international cricket, smashed an unbeaten 68 off 30 deliveries studded with five boundaries and six massive hits over the fence to showcase her talent and class in the league.

However, her exploit with the bat was overshadowed by remarkable innings from Laura Wolvaardt in the run chase. The youngster has been one of the mainstays for the Northern Superchargers and opened the batting along with Alyssa Healy. 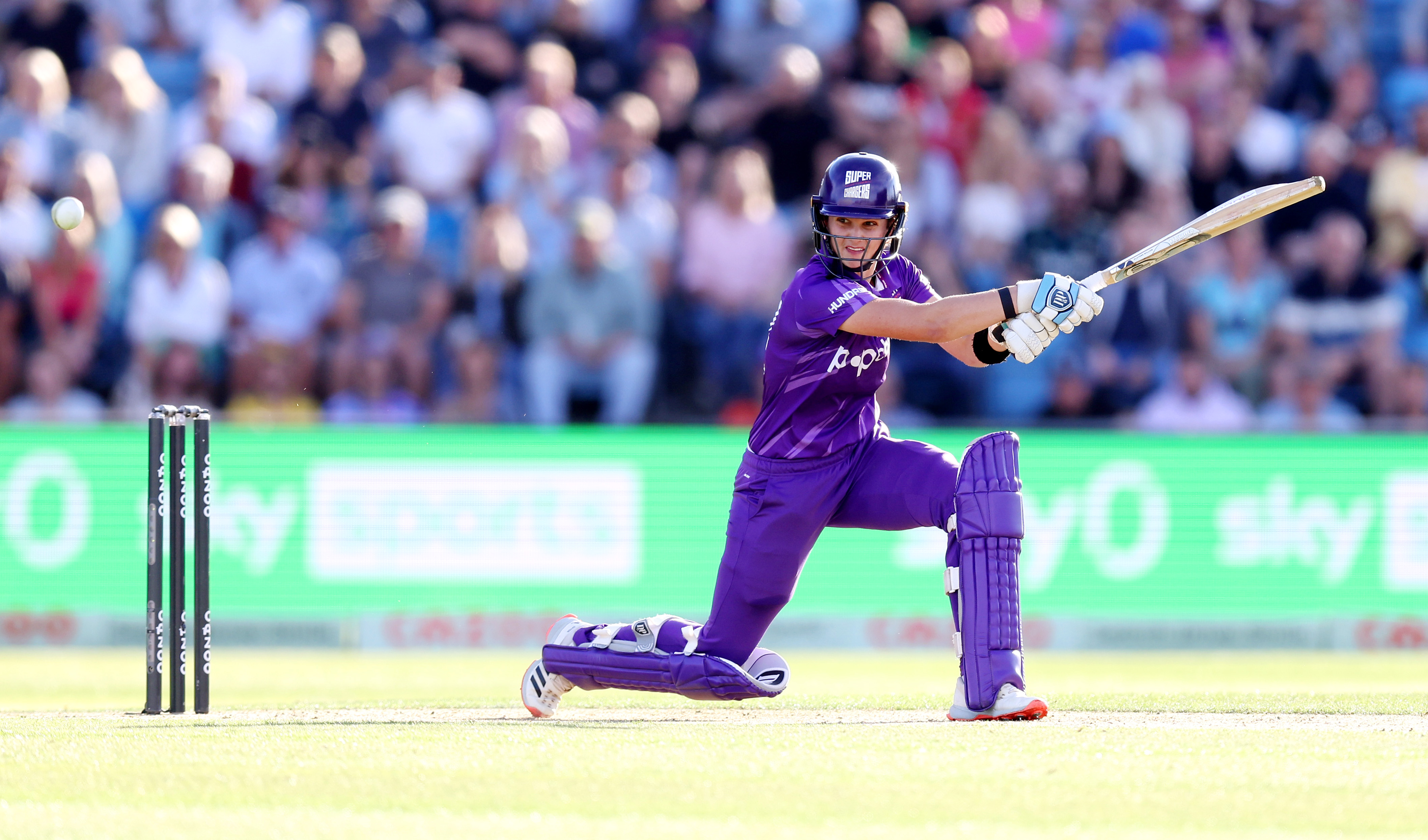 While Healy was dismissed for a quickfire 25 off 18, Wolvaardt was strong at the other end as she smashed an unbeaten 90 off 49 deliveries to guide the Superchargers over the line by seven wickets with a ball to spare.

On a night when Dottin's brutal power was at the forefront, it was a young 23-year-old who displayed a masterclass that left the cricketing pundits awestruck.

"A special innings in any format. A phenomenal innings."

"There was elegance, brutality, skill and nerve in that innings to see Superchargers over the line," said BBC commentator Kevin Howells and Lauren Winfield-Hill, and they weren't wrong as she single-handedly guided her side over the line in a high-scoring game.