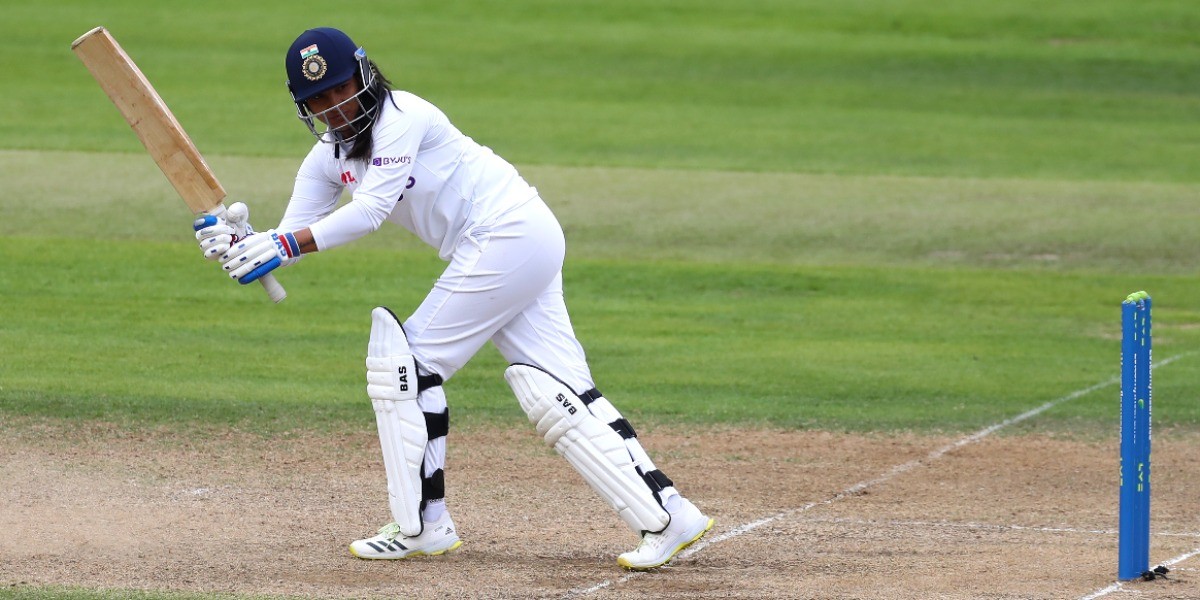 Earlier, India lost opener Shafali (63) Verma early when she was caught by Katherine Brunt off Ecclestone in the 30th over

Indian women suffered yet another batting collapse before their lower-order lifted them to 243 for 8 at tea as the one-off Test against England headed for a tense finish here on Saturday. India lost four quick wickets for 28 runs after lunch but debutant Sneh Rana (27 not out) and veteran Shikha Pandey (18) kept the visitors afloat with a crucial 41-run partnership for the eighth wicket. The duo battled for almost 17 overs before Pandey was caught behind off N Sciver's bowling in the 91st over.

At the tea break, Taniya Bhatia (3 not out) and Rana were at the crease with India leading by 78 runs with two wickets in hand. A minimum of 40 overs still remain in the match. Resuming the second innings at 83 for one, India were 171 for three at lunch with Deepti Sharma producing a resolute 54. Sharma shared 72 runs with Punam Raut (39 off 83 balls) but was dismissed at the stroke of lunch.

After the break, England dealt two quick blows, dismissing skipper Mithali Raj (4) and Raut cheaply to leave India at 175 for five. While Raj completely misread an Ecclestone delivery only to see it clip the bails off, Raut, who was looking good till then, ended up giving a straight catch at square leg.

Pooja Vastrakar (12) then smashed three boundaries off Ecclestone in the 68th over before being cleaned up by Heather Knight in the 71st over. Vice-captain Harmanpreet Kaur, who had scored just 4 in the first innings, too couldn't last long in the middle as she got out playing a slog sweep to become the fourth victim of Ecclestone. Pandey and Rana then stemmed the rot as the duo hit eight boundaries between them.

Earlier, India lost opener Shafali (63) Verma early when she was caught by Katherine Brunt off Ecclestone in the 30th over.

The India prodigy could add just eight more runs, which included a six off Ecclestone, to her overnight score of 55 as India slipped to 99 for 2. Smacked for a straight six in the first ball of the over, Ecclestone came back to dismiss Verma in the last delivery with Brunt taking a spectacular catch at long-on.

Sharma then produced a dogged half-century to keep alive India's hopes of forcing a draw. Joining hands after losing Verma, Sharma and Raut showed great resilience as India took a lead of six runs with seven wickets in hand at lunch. However, a sudden lapse of concentration saw Sharma go for a reckless slog off Sophie Ecclestone in the 58th over only to drag the ball onto her leg-stump in what was the last ball before lunch.

Sharma played some good-looking shots, which included a drive off Anya Shrubsole and a sweep shot. Raut too had a few hits to the fence -- one-off Ecclestone across the cover region and the other being a back-foot punch through covers. Raut also survived two LBW appeals with DRS coming to her rescue on both occasions.

Sharma reached her fifty, taking a single off Natalie Sciver behind square in the 55th over. India were 83 for 1 in their second innings after the final session was washed out on Friday.