Opportunity for RCB, RR to build on promising start 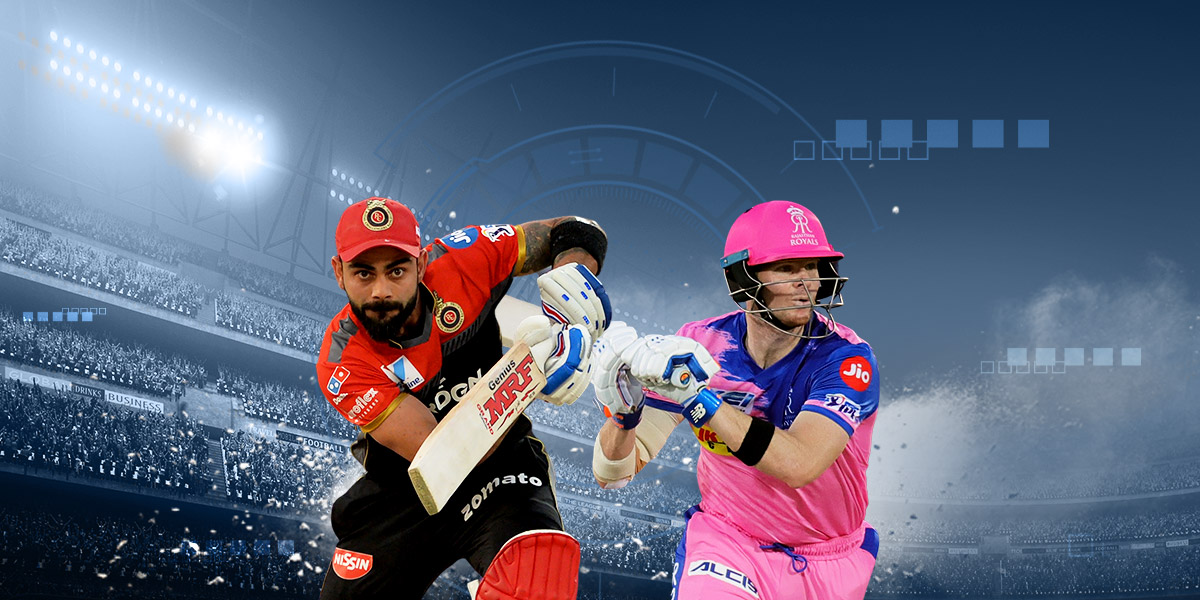 Opportunity for RCB, RR to build on promising start

The two teams go into this match with four points from three matches each, a pleasant change for both considering their disastrous starts last season

Two wins from three matches – it’s fair to say that this is not the Royal Challengers Bangalore (RCB) we're accustomed to seeing at the start of an Indian Premier League (IPL) season. It is, in fact, the first time since 2014 that they’ve managed to have more wins than losses in their first three matches of a season. Last year, they had lost their first six! A welcome change for Virat Kohli and co. indeed.

On the other hand, Rajasthan Royals (RR) have an identical record to that of RCB this season. While generally they’ve been better off the mark than the Bengaluru-based franchise, they had begun the 2019 IPL with three losses. So, despite their defeat to Kolkata Knight Riders (KKR) on Wednesday, they should be pretty pleased with proceedings thus far.

RR AND ADAPTING TO CONDITIONS

This will be the first game of the season for either team at the Sheikh Zayed Stadium in Abu Dhabi. Till date, during IPL 2020, the run-rate here (8.1) is the lowest among the three stadiums. Hence, both sides will need to adapt a little.

The Royals, especially, will need to change their approach. After the defeat against KKR in Dubai, RR captain Steven Smith said: “Few of us still thought we were playing in Sharjah.” While chasing a target of 175, which was neither tiny nor colossal, their game plan was staggeringly aggressive. It was rather well typified by Smith, himself, playing shot-a-ball against international team-mate Pat Cummins early in the innings before losing his wicket.

In fact, so far in IPL 2020, two of the three innings that have seen the highest false shot percentage have come from Rajasthan – 33.3% against Kings XI Punjab (KXIP) in a miraculous victory and 31.6% against KKR in a 27-run defeat. This indicates that they probably need to be more controlled with their aggression while batting, especially when playing outside Sharjah. 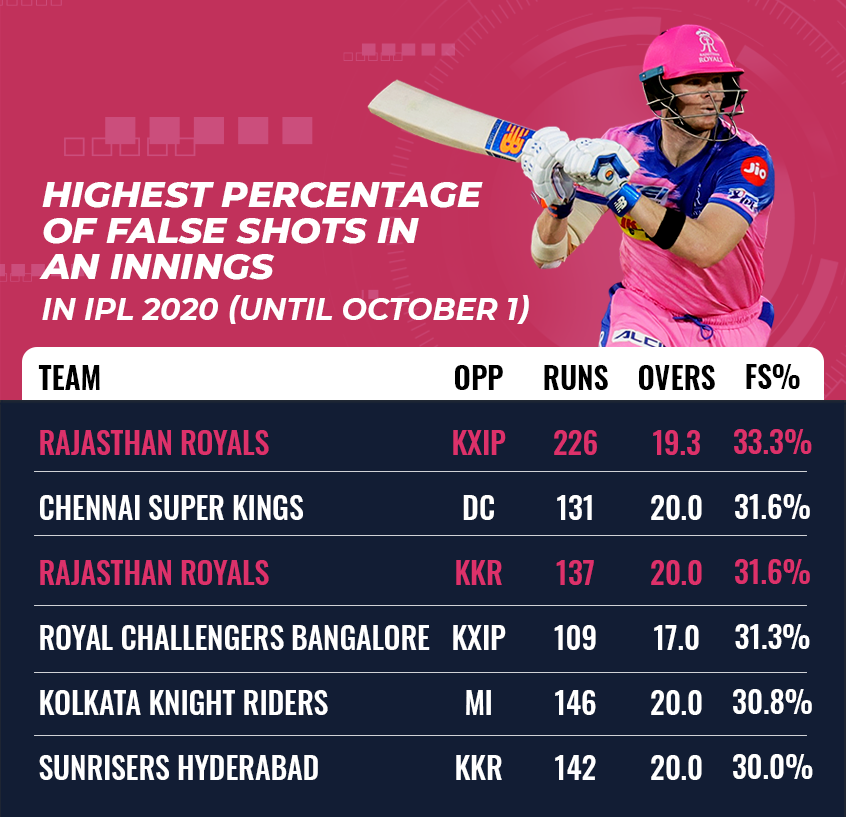 They might need to add more muscle to their batting too. While a top three of Smith, Jos Buttler and Sanju Samson is awe-inspiring, their middle-order perhaps needs some tweaking. Robin Uthappa has been disappointing so far this season. Also, since 2018, he averages just 23.2 and has a strike rate of 122.5, with just two fifties from 30 IPL innings. And it must be remembered that most of Uthappa’s peak performances in the IPL have come while batting in the top three.

While there is depth in RR’s batting, as shown by Jofra Archer and Tom Curran thus far, they need to possibly add one more batsman in the middle-order to give the team more balance.

The Royal Challengers, meanwhile, come into this game after having played three matches in Dubai. While they don’t have to change their approach drastically when it comes to their batting, their bowling continues to be a perennial worry. Despite having only played in Dubai, where the average run-rate this season has been 8.3, they have conceded 200+ totals twice already.

Since 2018, RCB have an economy rate of 11.8 between overs 16-20 – from a bowling perspective, it’s the worst in the IPL. Even considering that they played their home matches at a batting-friendly M. Chinnaswamy Stadium in Bengaluru, it’s still a ridiculously high number. This season, with the IPL being held in the United Arab Emirates, RCB have an economy rate of 13.7 in the last five overs of an innings. This shows that there’s more to their death-overs woes than their home ground back in India. 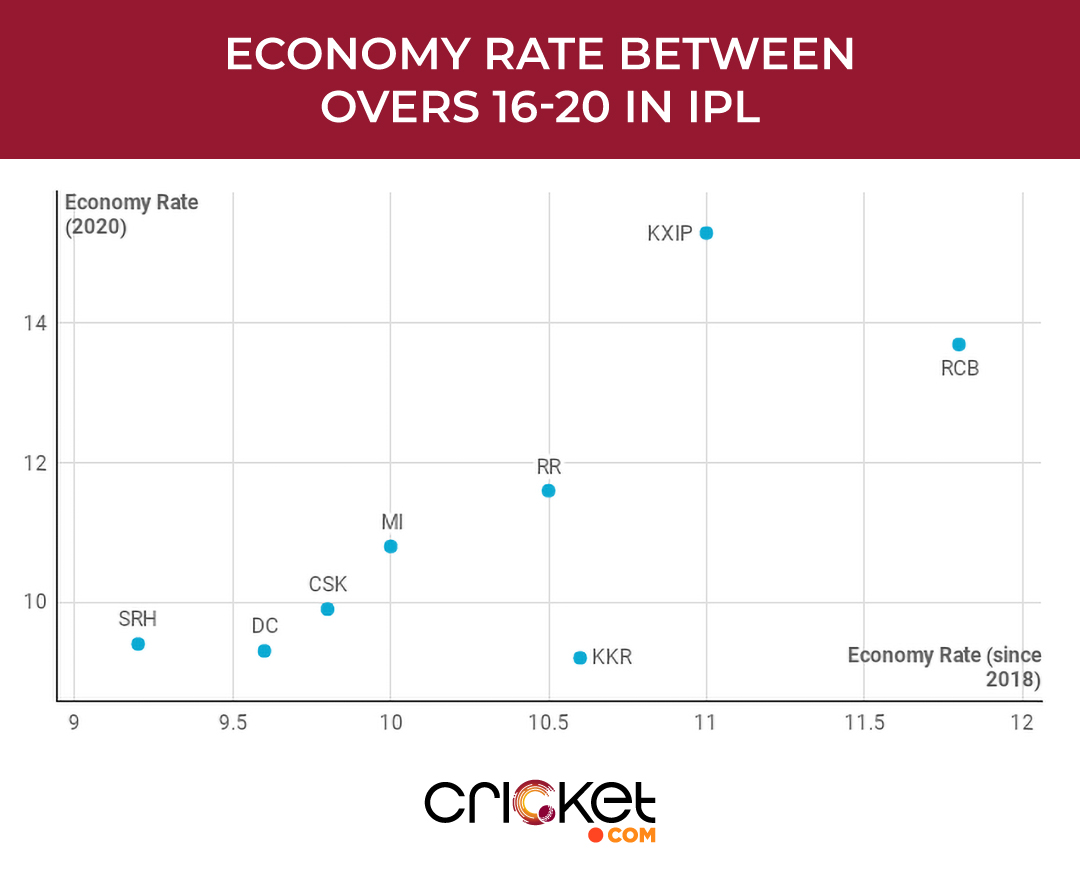 An injury has seen Chris Morris miss the first couple of weeks of IPL 2020. When fit, can he be the solution to RCB’s death-overs problem? He has an economy rate of 9.1 between overs 16-20 in the IPL since 2018 which is better than the league average, so when he returns, there might be some respite.

Navdeep Saini impressed in the win against MI, especially in the Super Over, conceding just seven runs against batsmen of the calibre of Kieron Pollard and Hardik Pandya. If Saini can be consistent, it will be a huge boost for RCB who have often struggled to field dependable Indian pacers in the past few seasons.

Yuzvendra Chahal and Washington Sundar have been formidable in the spin department, so there are encouraging signs for RCB too. A couple of shortcomings remain though and how the team management tackle those issues will have a huge say on the Royal Challengers’ playoff chances this season.

KOHLI, DE VILLIERS UP AGAINST GOPAL

A nice subplot in this game will be the battle between Kohli and AB de Villiers against Shreyas Gopal if it does take place. Every time Gopal has bowled to either of the modern-day greats in the IPL, he has dismissed them. Gopal has bowled 28 deliveries against de Villiers, dismissing him four times and he has got the better of Kohli thrice in 12 balls in the 20-over format. 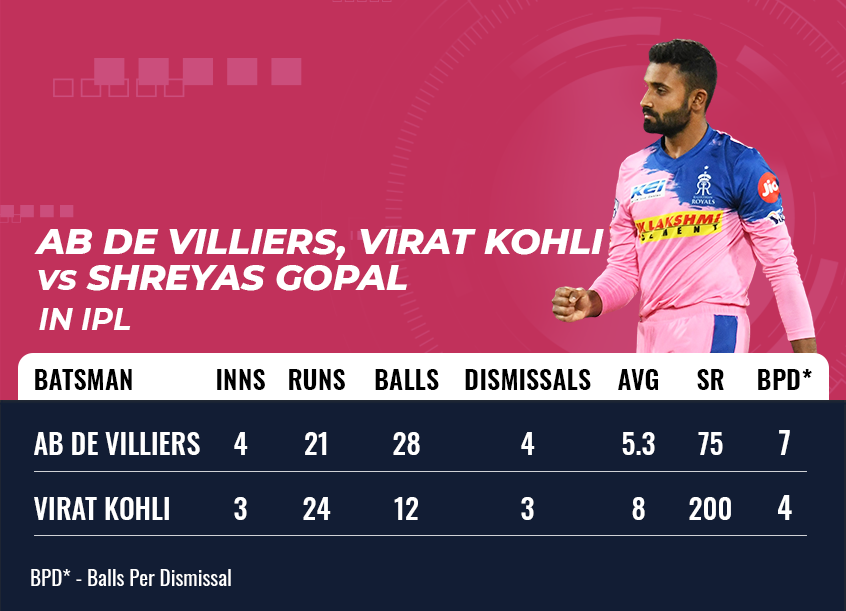 The Bengaluru-born legspinner, who took a hat-trick against RCB last season, has been in poor form though at the start of this tournament which will be a worry for RR. After ending the previous edition as the team’s highest wicket-taker, he has just one scalp to his name from three matches so far this season.

Kohli, too, has been struggling – having scored just 18 runs in three innings in IPL 2020. Could a contest between the RCB captain and the RR spinner possibly help get either back into form? Only time can tell, but it should be an interesting battle nevertheless.

Samson recently spoke about how a conversation with Kohli changed his perspective and dedication towards cricket. The results were there to be seen during his exceptional knocks against CSK and KXIP as he won two Player of the Match awards to start the tournament. The Royals batsman will know though that it is consistency that has been his drawback in recent years and the only way he can begin mending that is with a huge run-tally this season.

After a below-par performance against the Knight Riders, Samson will be keen to prove that he can perform across conditions and that his showings in Sharjah had much more to it than the track and the small boundaries. And who better to do it against than the team that is captained by the man who gave him some possibly career-changing advice earlier this year!