Pakistan need to circumvent the Protea hurdle to stay alive 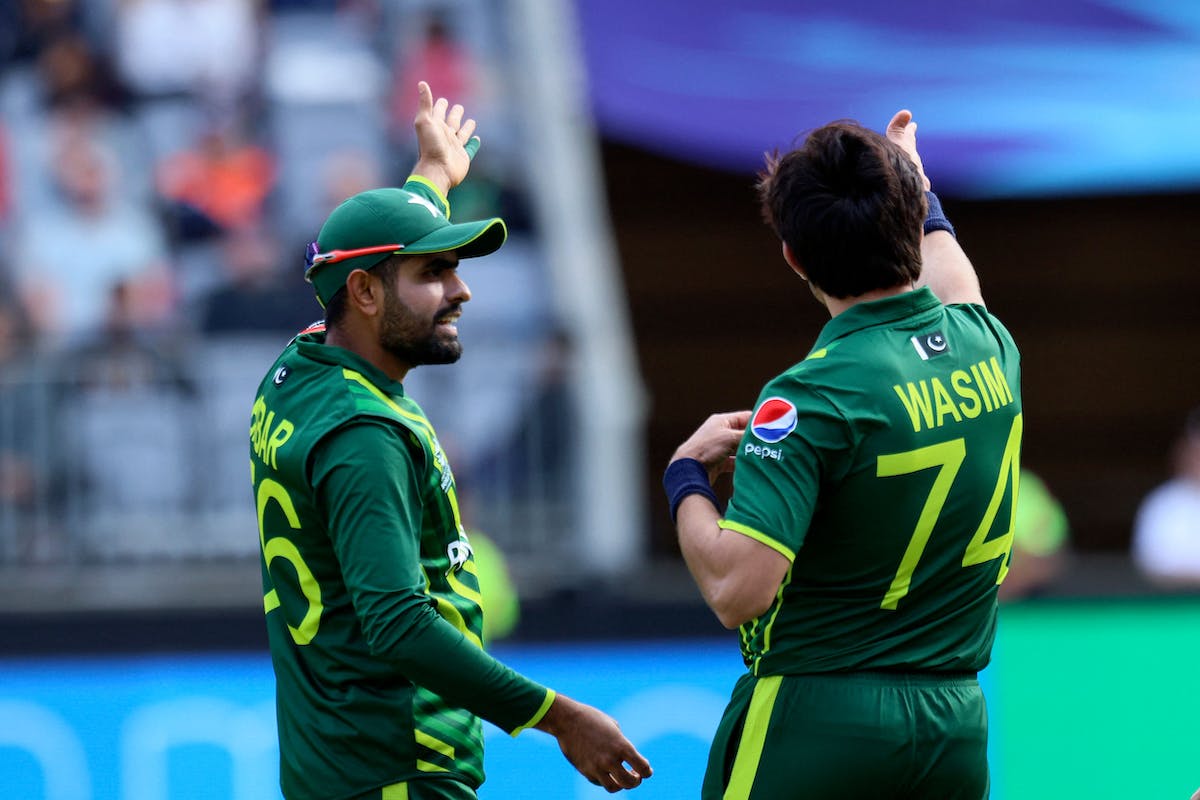 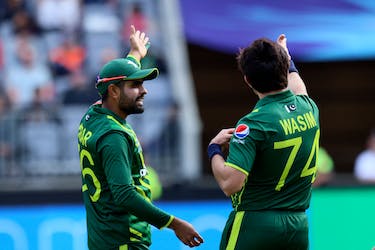 Pakistan need to circumvent the Protea hurdle to stay alive

The equation for Pakistan is as simple as it is complicated. The easy part first, they need to win both their remaining Super 12 matches which makes their clash with South Africa on Thursday (November 3) a must win game. They will need to win Bangladesh as well. While that puts their fortunes in their own hands, they will also require either India and South Africa to lose their last Super 12 match - against Zimbabwe and Netherlands respectively.

Farfetched events aside, facing South Africa, an unbeaten side in the tournament as yet, is the first task in hand. They will derive confidence from their strong record against the Proteas in the World Cup fixtures. It is 100% in the 21st century. Yes, be it the ODI World Cup or the T20 edition, Pakistan have never lost to South Africa in a World Cup in the ongoing century. Many times being the underdog side as is the case in this tournament. 2019, 2015, 2012, 2010, 2009 and so on. Pakistan enjoy facing South Africa when the stakes are high.

Sydney, the venue for this contest, poses a unique situation. It is a spin-friendly venue. At 42.6%, the spinners have picked the highest proportion of wickets among all World Cup venues. But it is a contest between two of the best pace-bowling attacks in the tournament. The Protea pacers have struck at 11.8 runs per wicket in the tournament, the best among all sides. On the other hand, Pakistan pacers have the best economy in the World Cup - only 5.9 runs per over, followed by South Africa’s 6.2. This adds a new layer to what is expected to be a close battle on Thursday.

A challenge for the Pakistan batters already

It is no surprise that Pakistan have struggled to cope with the pace and bounce in Australia. Their batting average of 18.1 against pace is only better than that of Afghanistan and Netherlands among the Super 12 sides. Talk about strike-rate, they dwindle on that aspect too. 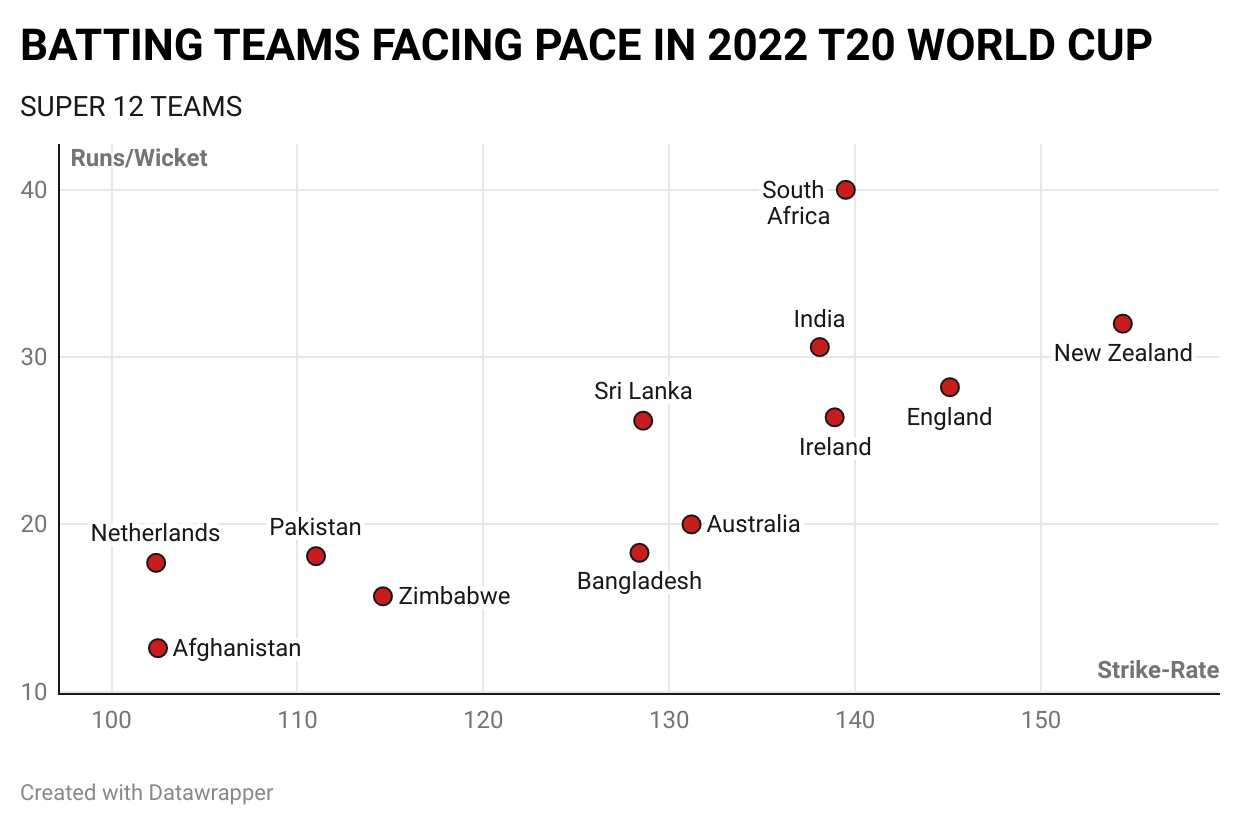 Hence, negotiating the South Africa pacers, who are breathing fire in this tournament, comes as the first big challenge for Pakistan batters. Interestingly, both Babar Azam and Mohammad Rizwan have played 10 T20Is each against Pakistan. Yet, none of them have faced any of the four frontline Protea pacers - Kagiso Rabada, Anrich Nortje, Wayne Parnell and Lungi Ngidi, or Marco Jansen, the fifth pacer who has been sitting on the bench.

Therefore, the venue SCG provides a silver lining to the Pakistan top-order. It has shown the least amount of swing while batting first. Openers in the first innings at SCG average 37.6, the second highest among all venues thus far. However, the same number in the second innings reduces to a mere 7.9. All four games at the SCG so far have been day-night games. The hint of swing in the second innings - under lights - has proven fatal for the side batting side. It has eventually resulted in a 100% win record for the side batting first. Hence, batting first becomes critical for Pakistan given the dynamics of this contest.

South Africa have three left-handers in their top five who are going to play a big part in this game. Their presence itself neutralizes Mohammad Nawaz - a match-up clearly in South Africa’s favor. Nawaz has an economy of 8.7 versus left-handers this year in T20Is, in comparison to 7.4 against right-handers.

The more prominent match-up lies against Pakistan’s attacking leg-spinner - Shadab Khan. In T20Is in 2022, Shadab has clearly struggled bowling to the left-handers. 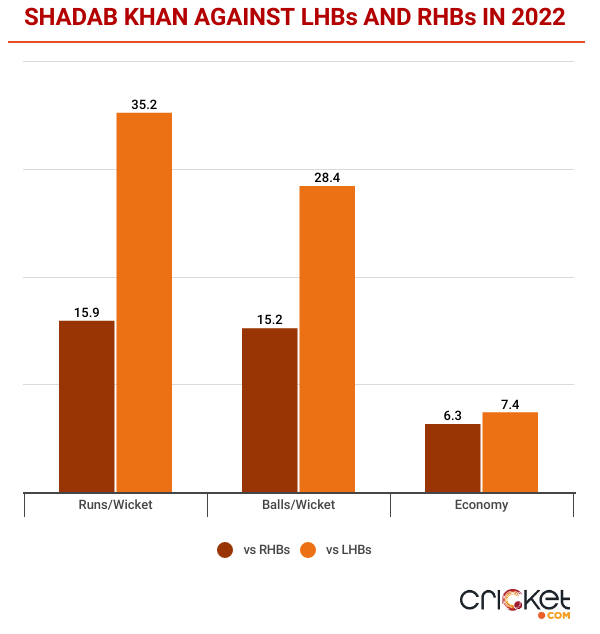 In T20s this year, Rossouw has a strike-rate of 210 versus leg-spinners while the same number for de Kock is 175. Miller has the lowest number in this regard - 134 while averaging 20.5. Therefore, three left-handers up South Africa’s sleeves neutralize Pakistan’s advantage with spin.

This is where Iftikhar Ahmed’s part-time spin can come in handy for Pakistan. He averages 75 against left-handers this year but has an economy of only 6.

Unless South Africa have decided to finally make the call of dropping their skipper Temba Bavuma for a more in-form batter in Reeza Hendricks, no changes are expected in their side. There might be a case for Tabrais Shamsi making his way back in the XI. Shamsi picked 3/20 against Bangladesh at the same venue but Pakistan are much better side in facing spin. Also, Shamsi played that game replacing Lungi Ngidi who took four wickets in the match against India and is the highest wicket-taker for South Africa this year.

Fakhar Zaman is unavailable for this game. Pakistan can bring in either Haider Ali or Asif Ali To replace him.