Jofra Archer received his England Test cap but was still to make his debut as rain saw the first day of Wednesday’s second Ashes match against Australia abandoned without a ball bowled at a soaking wet Lord’s.

Chris Jordan, a Sussex team-mate, presented Archer with the cap in England’s pre-match huddle ahead of a revised toss at 3:00pm local time (1400 GMT) -- only for further rain to delay the start once again.

Jordan may only have made eight Test appearances but he has been something of a ‘cricket brother’ for fellow Barbados-born county colleague Archer.

When the match should have been getting underway at 11:00 am (1000 GMT), the square and pitch remained fully covered.

Further rain then meant hopes of any play before lunch soon disappeared as well.

Now officials will hope the weather relents sufficiently for the match to begin at the scheduled 1000 GMT start of Thursday’s second day.

Ashes-holders Australia lead the five-match series 1-0 after their 251-run win in the first Test at Edgbaston last week.

It is 18 years since Australia last won an Ashes series in England.

The exceptions were in 1997 when Australia lost at Edgbaston, but won the six-match series 3-2 and 2005 when England lost at Lord’s but won the five-Test series 2-1.

World Cup-winner Archer is set to play after James Anderson, England’s all-time leading wicket-taker, was ruled out with a calf injury that meant he bowled just four overs at Edgbaston.

Neither England nor Australia have yet named their teams. They are not required to do so until the toss takes place. 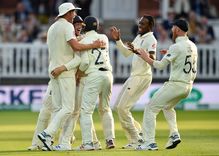