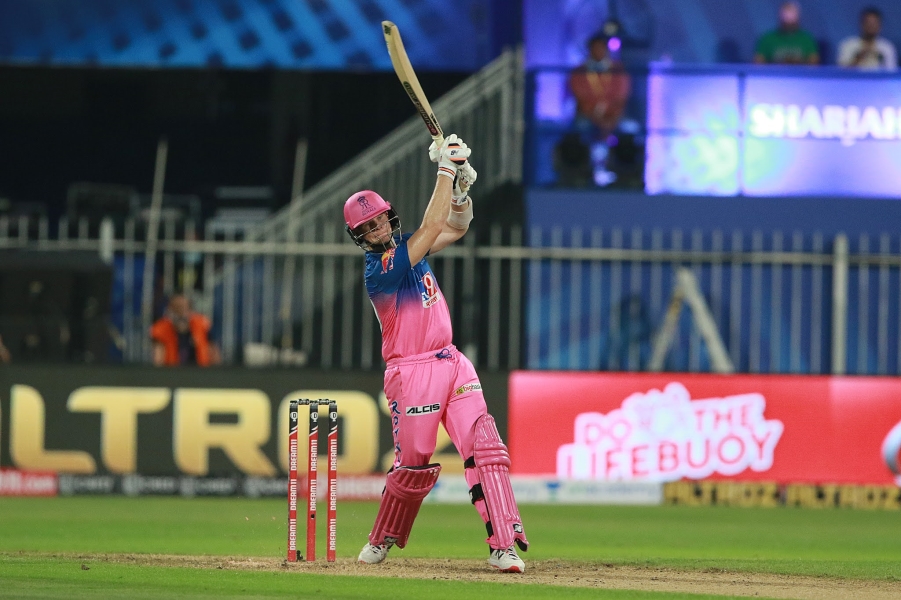 Rajasthan Royals (RR) have made an excellent start to the 2020 edition of the Indian Premier League (IPL), winning both their matches so far. They were involved in two high-scoring matches and came out on top against Chennai Super Kings (CSK) and Kings XI Punjab (KXIP), the latter was especially memorable as they completed the highest successful run-chase in IPL history.

On the other hand, after their campaign began with a loss against Mumbai Indians (MI), Kolkata Knight Riders (KKR) produced a dominant display against Sunrisers Hyderabad (SRH) to get their points tally up and running for the season.

There is absolutely nothing to separate the Royals and the Knight Riders when it comes to their head-to-head record – in 20 matches, each team have been victorious 10 times. KKR, though, have been the better side when they have faced each other recently, with Dinesh Karthik’s side winning four out of the last five encounters against RR. 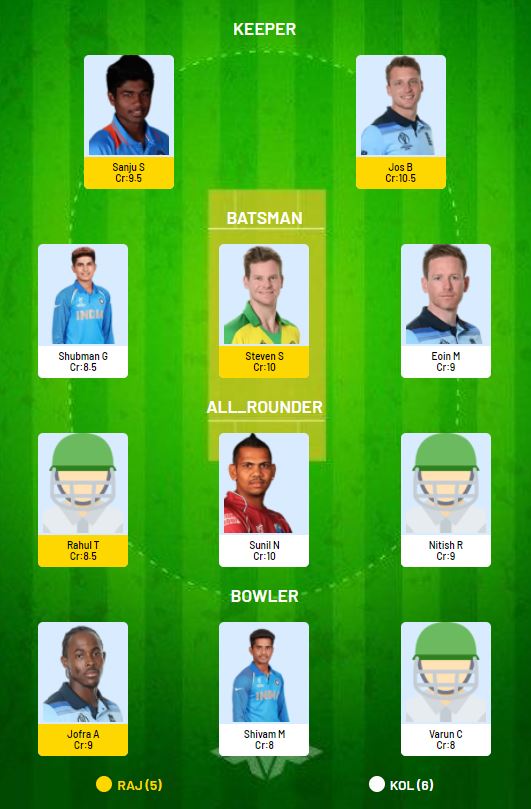 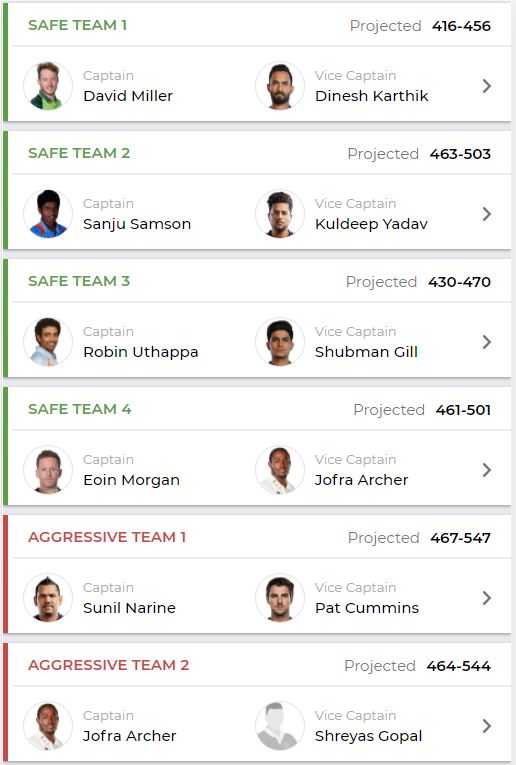 This will be the sixth match of the season at the Dubai International Cricket Stadium.

After two matches in Sharjah where every innings so far has seen a 200+ total, RR will now travel to Dubai where conditions weren’t as friendly for batting until Monday’s match between Royal Challengers Bangalore (RCB) and Mumbai Indians (MI). For KKR, this will be their first game in Dubai as well after playing their opening couple of matches in Abu Dhabi.

In the five matches held at this ground so far this season, there have been 1653 runs scored at a run-rate of 8.4, with a wicket falling every 26.7 runs and 19 deliveries. The highest and lowest team totals in Dubai this season thus far came in the same match – with KXIP posting 206/3, following which RCB were bowled out for 109.

When we consider T20 stats in Dubai since 2018, a wicket has fallen every 17.5 deliveries – among the three stadiums that are hosting matches this season, this is the best from a bowling viewpoint. An average of 22 is also among the lowest when compared to Sharjah and Abu Dhabi during the aforementioned period.

While teams have elected to bowl first after winning the toss in 37 out of 56 T20 matches held in Dubai since 2018, teams batting first have won 53.6% of the games.

In IPL 2020, in Dubai, every team winning the toss has opted to bowl first so far and they have lost each time (twice via a Super Over). 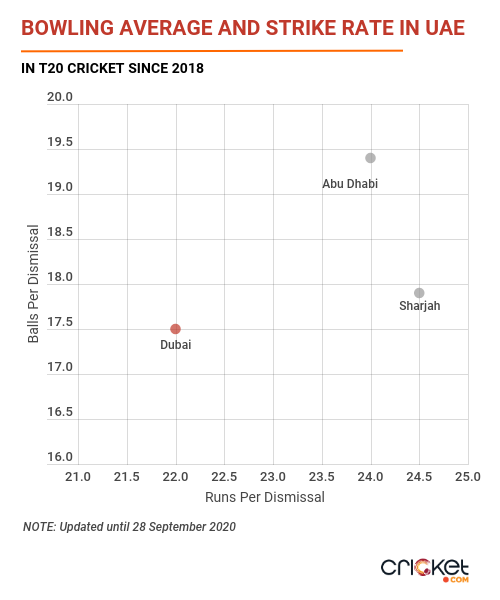 In five matches this season in Dubai, pacers have taken 32 wickets while spinners have picked up 23. Something you might find interesting is that spinners have bowled 37.7% of the deliveries here in Dubai in IPL 2020 but have taken 41.8% of the wickets.

The slower bowlers (19.3) have had a better bowling strike rate this season as well when compared to pacers (23) at this venue.

In T20 cricket since 2018, though, pacers have taken wickets more frequently – they have a strike rate of 18.4, compared to 20.6 for the spinners. Batsmen have found it tougher to score quickly against spin at this ground, be it during IPL 2020 or in T20 matches since 2018.

Picking a fantasy team is far from easy for this match. On FanFight, the credits of five players who you’d usually consider as must-haves – Sanju Samson, Jos Buttler, Steve Smith, Sunil Narine and Andre Russell – are 9.5 and upwards. It’s not possible to have a balanced team if you pick all five and we decided to leave out Russell because he bats down the order and has bowled only four overs in two matches so far – this is a risky move, nevertheless. 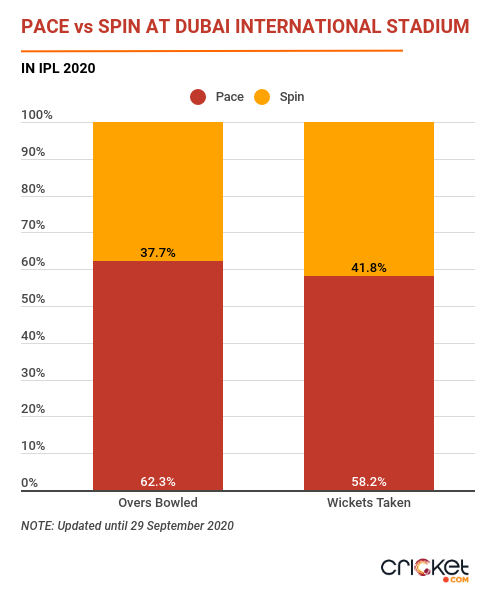 After a below-par opening game with the ball, Pat Cummins came back strongly against SRH on Saturday. It was interesting to see that Karthik decided to give three overs to Cummins in the Powerplay. If that tactic is followed in this game as well, then get ready for a fascinating battle between two world-class cricketers in Cummins and Jos Buttler. 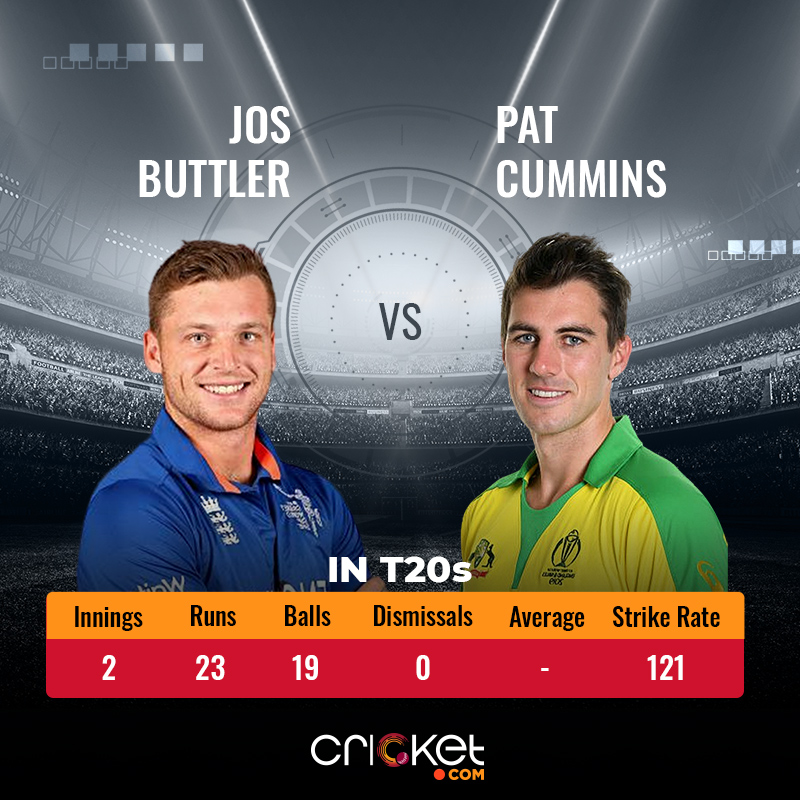 Sanju Samson has been sensational in IPL 2020 so far, playing a huge role in both of RR’s victories. How KKR counter Samson could have a huge say on the result of this match. One way could be using Sunil Narine who has an outstanding record against Samson in T20 cricket. Narine has dismissed the Royals batsman thrice in 45 balls and has conceded less than a run-a-ball. 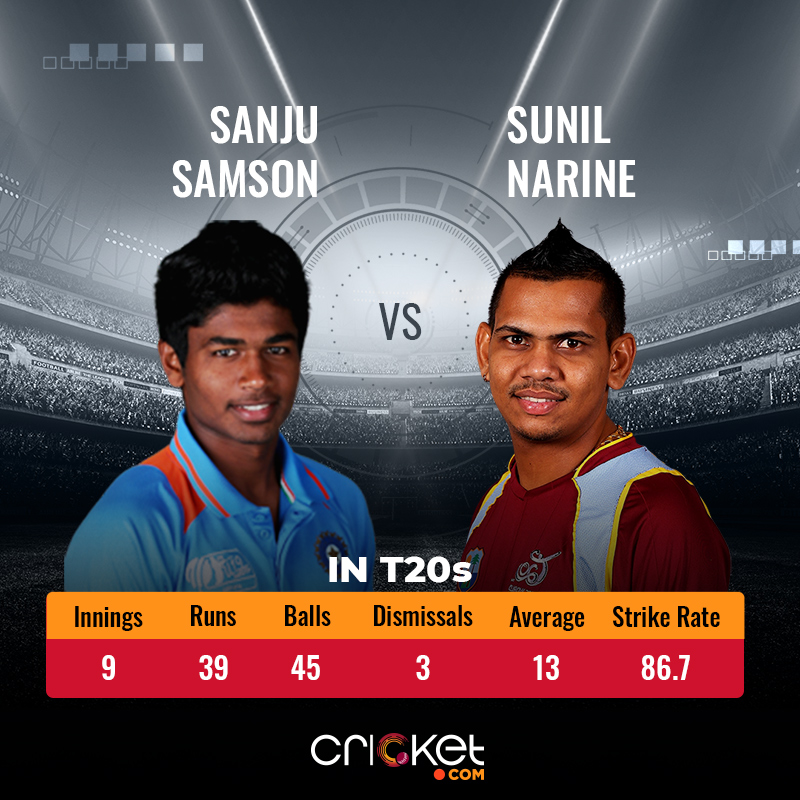 Spinners have done well in Dubai so far this season. After two matches in difficult conditions for bowlers, Shreyas Gopal is likely to be more effective for the Royals here. He could come up against KKR captain Dinesh Karthik, a batsman against whom he doesn’t have a great record in T20 cricket. Karthik has a batting strike rate of 157.1 against Gopal from 35 deliveries. 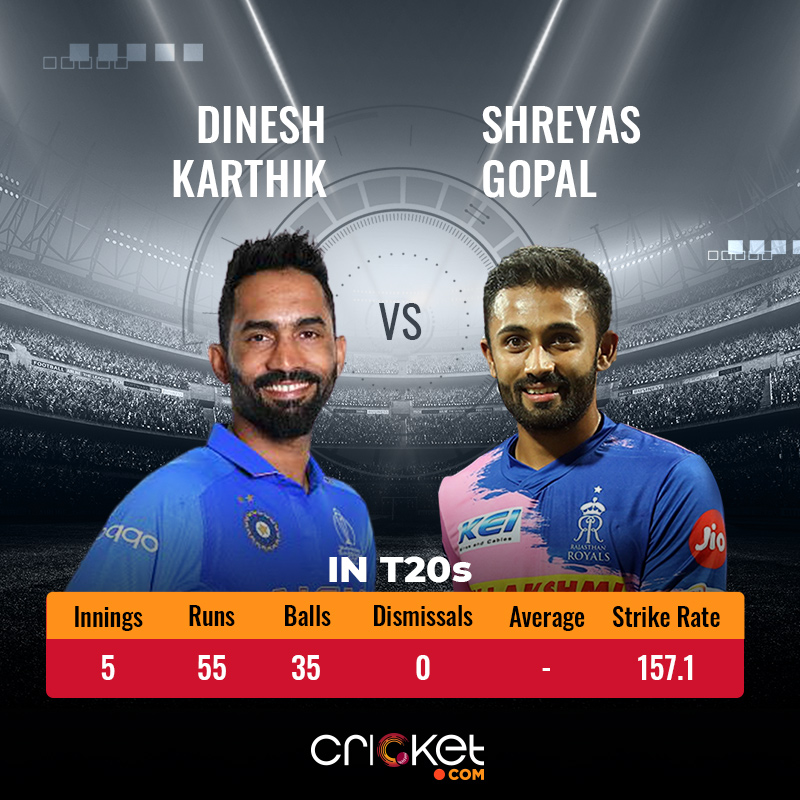 This could be one of the most riveting contests in the IPL if it does take place. Jofra Archer is expected to bowl at the end of the innings for RR and could be up against Andre Russell. With Archer, you have one of the best fast bowlers in the world and, with Russell, one of the best T20 batsmen in the world – what more could you ask for? 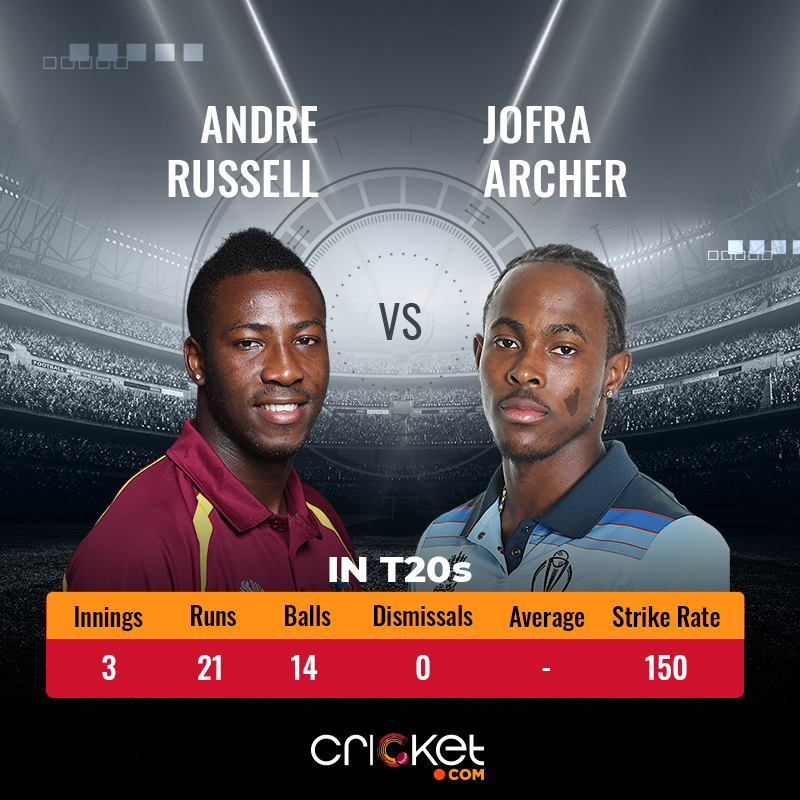 There are some spectacular players who will be part of this match and, as a result, there are multiple options when it comes to captaincy. We have gone with Steve Smith, mainly because of his consistency. He has scored two fifties from as many innings so far this season. In the IPL since 2016, among batsmen who have batted in 20+ innings, only five have a higher batting average than Smith (42.1).

Our Criclytics player projector predicts Smith could score 15-38 runs in this match.

Shubman Gill played a flawless knock to guide Kolkata to victory in their match against Hyderabad. He showed exactly why he has been tipped for greatness since the 2018 U-19 World Cup. As an opener in the IPL, Gill has scored 313 runs in eight innings at an average of 52.2, notching up fifties in half of those knocks. He currently has the least false shot percentage (8.2) in IPL 2020.

Sanju Samson has been the Player of the Match in both of Rajasthan’s matches so far and has been instrumental to their perfect start this season. Since 2019, Samson has an average of 41.8 and a strike rate of 164.8 in the IPL which is very impressive. In fact, among batsmen who have faced at least 100 deliveries in the IPL during that period, only four have a better strike rate.

Our Criclytics player projector predicts Samson could score 15-38 runs in this match.

IPL-winning captain Gautam Gambhir has selected Samson as his captain for this match.

Sunil Narine has had a poor start to this season. The two-time IPL Most Valuable Player has scored only nine runs and picked up one wicket from two matches so far. There is a feeling around that opponents have figured out his shortcomings when it comes to his batting during the Powerplay. Yet, considering he opens the batting and bowls four overs every match, he still seems like a good option to consider in fantasy cricket.

Our Criclytics player projector predicts Narine could score 9-32 runs and could take 1-2 wickets in this match.