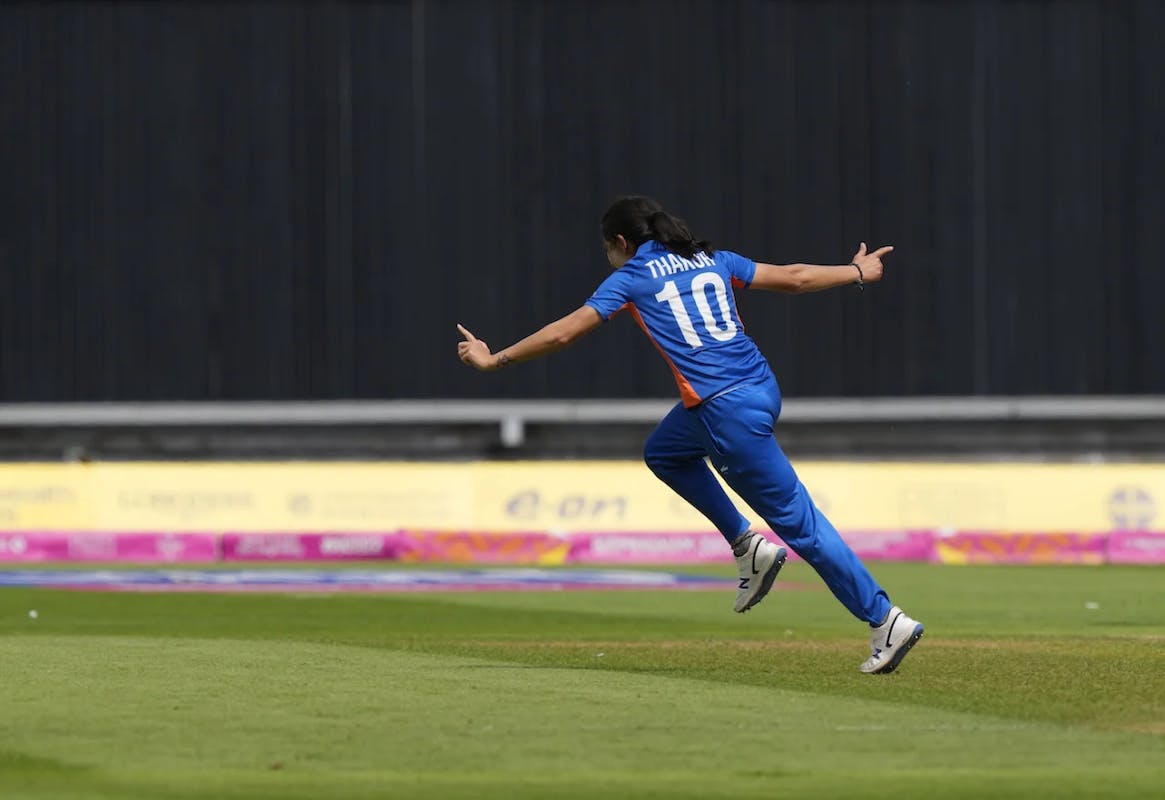 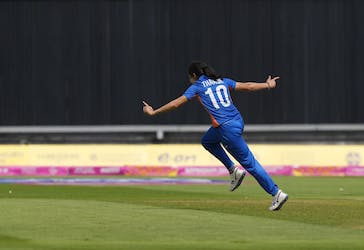 Right-arm seamer Renuka Singh dismantled Barbados' top order with a four-wicket haul as India demolished Hayley Matthews and Co. by 100 runs to qualify for the semifinals of the women's T20 cricket at the Commonwealth Games in Birmingham on Wednesday (August 3).

Asked to bat, India posted a solid total of 162 for 4 on the back of a fine unbeaten half-century from Jemimah Rodrigues (56* off 46 balls) and a 26-ball 43 from dashing opener Shafali Verma.

The Women in Blue then restricted Barbados to 62 for 8 in 20 overs with Renuka bamboozling the Barbados batters with an impressive spell. Captain Harmanpreet Kaur, Sneh Rana, Meghna Singh and Radha Yadav chipped in with a wicket apiece. Not a single Indian bowler had an economy of above 4.

Kyshona Knight was the top-scorer for Barbados with 16 while Shakera Selman made 12. Seven of their batters failed to reach double-digit figures. Barbados were dismissed for 64 in their nine-wicket defeat against Australia in their earlier match.

With the win, India finished second behind Australia (6 points from 3 matches) in Group A with four points from two wins. They had beaten Pakistan and lost to Australia in their earlier matches.

Renuka struck in the third ball of the Barbados innings, removing dangerous opener Deandra Dottin for a duck. She then dismissed captain Hayley Matthews (9), Kycia Knight (3) and Aaliyah Alleyne (0) in quick succession to reduce Barbados to 19 for 4 in nine overs.

During the Indian innings, opener Smriti Mandhana (5), who hit a half-century in India's win over arch-rivals Pakistan, fell cheaply but Verma and Rodrigues stitched a 71-run stand for the second wicket to prop up the innings.

India were, however, in a spot of bother as captain Harmanpreet (0) departed just three balls after Verma's dismissal. But a 70-run partnership between Rodrigues and Deepti Sharma (34 not out) for the unbroken fifth wicket took India to a good total.

The semifinals will be played on Saturday, with India set to take on the loser of the final league-stage game between England and New Zealand.