RCB need a gun all-rounder, among other things 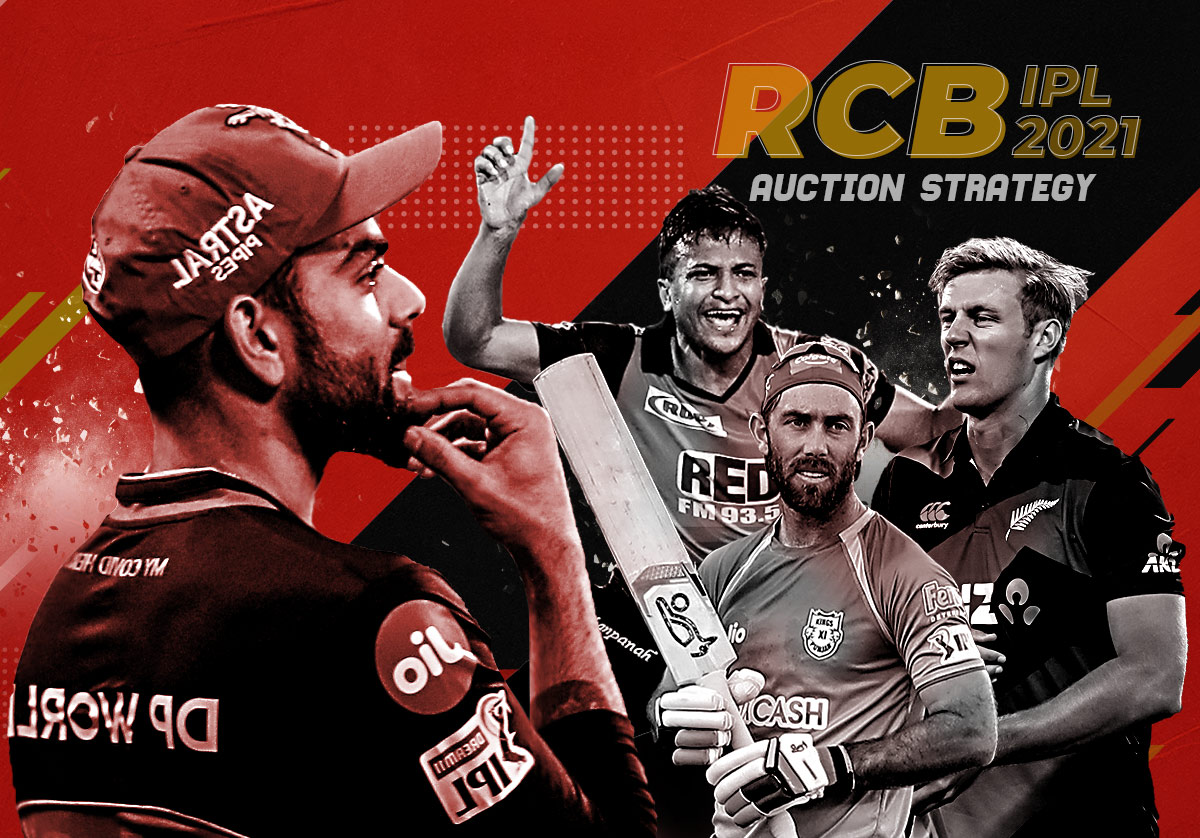 RCB need a gun all-rounder, among other things

Going by the number of releases, Royal Challengers Bangalore must have had a terrible season in 2020. But they did not. Sailing smooth throughout the tournament, a late hiccup resulted in a fourth spot finish for the Bangalore franchise. This might be a decent result for most teams but for a side with two best batsmen since the turn of the decade and no IPL trophy yet, anything less than the title seems like a failed campaign.

With as many as 10 players released ahead of the auction, RCB have the smallest contingent among all teams as of now. Even with two additions in the side after trading Daniel Sams and Harshal Patel from the Delhi Capitals, RCB have a squad size of 14 players. Among these, there are only five players with a stable T20 reputation - Virat Kohli, AB de Villiers, Yuzvendra Chahal, Washington Sundar and Devdutt Padikkal. As things stand, RCB rely on the upcoming auction more than any other team. It is hard for them to put out a decent XI based on the current squad.

RCB best XI based on the current squad- 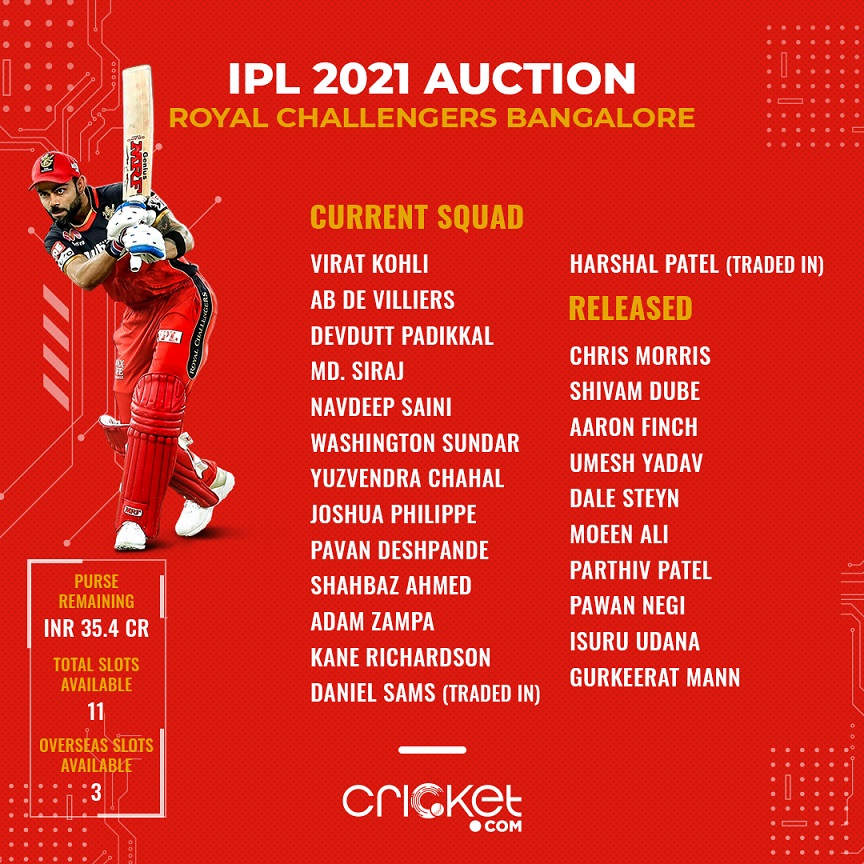 In a major rejig, RCB released 10 players due to various reasons. With a strike-rate of 111.2 in 12 innings at the top of the order, Aaron Finch failed to be the enforcer RCB wanted him to be. Judging by the current Big Bash League season, he seems to be going through a cursed time in T20 anyway.

Bought at a whopping 10 crores, Chris Morris let RCB down on fitness. He played only nine of the 15 matches, missing the crucial eliminator. Dale Steyn and Isuru Udana were last-minute picks in the auction for 2020. Both failed to create an impact. Umesh Yadav kept falling behind in the pecking order to Navdeep Saini and Mohammed Siraj. The emergence of Washington Sundar diminished the role of Moeen Ali. The Englishman played only three games. Parthiv Patel did not play a game in the last season and announced his retirement thereafter.

The only player whose release is tough to comprehend is Shivam Dube. While he is slightly overpriced – bought for INR 5 crores in 2019 – based on his performance, an Indian medium pace all-rounder is the rarest breed. With a plethora of releases, RCB could have saved themselves some headache by avoiding his release and persist with him for one more season before the mega auction in 2022.

Going into the auction, RCB can buy as many as 11 players, three of whom can be overseas. They have INR 35.4 crores in their purse to make the purchases.

Since there are multiple gaps to fill for RCB, they are set to be one of the busiest team at the auction this year. With not many gun players involved in the mini-auction, many teams are likely to go for a certain set of players even if they are moderately good. This is only going to complicate things further for RCB.

This can be a middle-order batsman to assist de Villiers if Kohli opens or a backup opener if he doesn’t.

Over the years, it was the bowlers who let RCB down. In a reversal of fortunes, their batsmen had the lowest run-rate of 7.87 among all sides in IPL 2020. This was largely due to an ultra-conservative run-rate of 6.93 in overs 7-15. Kohli himself batted at a shoddy strike-rate of 110.1. 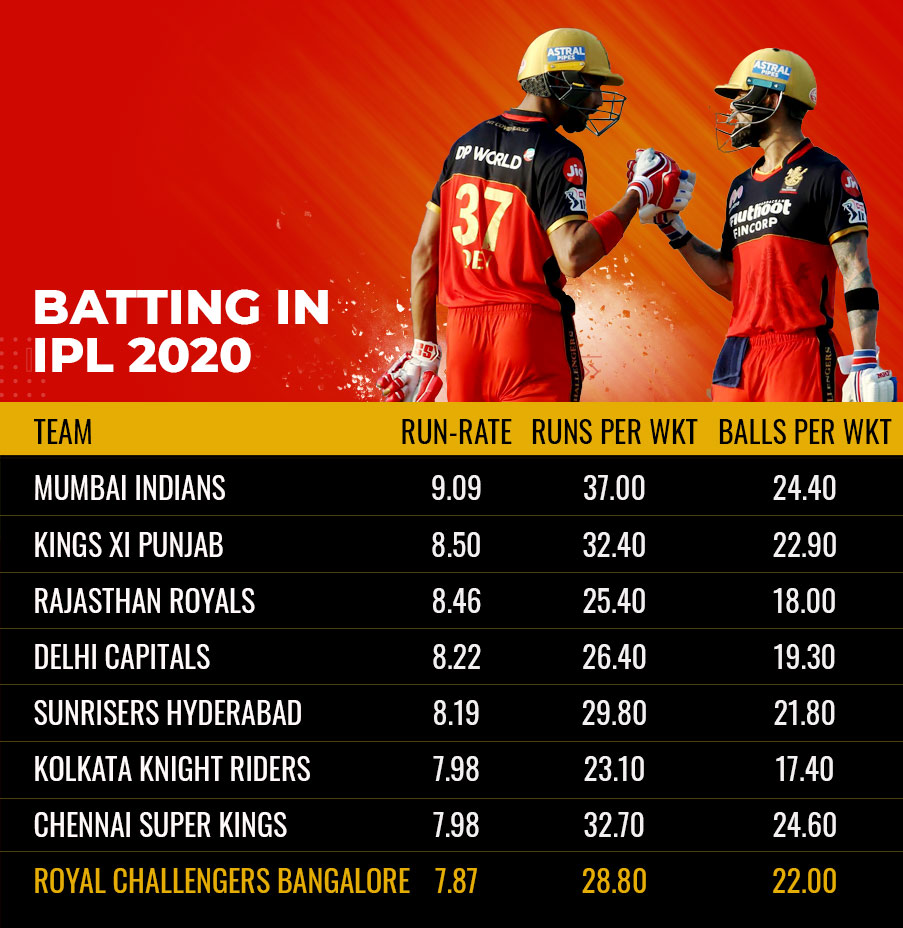 It is not like Kohli cannot bat quicker. But, owing to rather mediocre options apart from de Villiers in the middle-order, he has to limit his instincts and bat conservatively. His approach might not change even if he opens. As the best XI based on the current squad from above suggests, if there are no additions, RCB will have to bat Sundar at five. In Tests, he is more of a batsman who bowls but in T20s, it is reverse. Number five is too high for him.

Now, if Kohli opens – which he should - RCB will have to bat Philippe in the middle-order. This will be outside the role he has been more successful in. Hence, RCB will need one batsman as a backup. Preferably someone who can shoulder some of de Villiers’ responsibility of providing impetus to the innings. Keeping this in mind, RCB can target players like Glenn Maxwell and Sam Billings. Maxwell, in particular, will feel at home at the Chinnaswamy stadium. Based on their purse, it is highly likely that they can snap at least one of these two.

If Philippe opens and Kohli plays at three, RCB will need options for a backup opener. Since they have Padikkal and Kohli as conservative players in the top-order, they should target bashers like Matthew Wade, Rahmanullah Gurbaz, Jason Roy and Liam Livingstone.

Currently, RCB have three all-rounders in their squad – Sundar, Harshal Patel and Daniel Sams. Each of them is a bowler first. One of them is a foreign player. This is where it is tough to understand the release of Dube. He was equally decent (or equally mediocre) on both aspects.

Thus, RCB need a player who can bat at five or six and can even bowl a few overs. Why does he need to bowl? It is because there is no Indian player in the auction who is a proven match-winner in the middle-order. Hence, this will occupy a foreign spot. Since two of the top four spots are surely going to be foreign players, RCB cannot play two foreign bowlers. Hence, they must buy a gun foreign all-rounder.

The players that they can target include Kyle Jamieson and Moises Henriques if they are looking for a pace-bowling option. But, in a team that has Siraj, Saini and Harshal, this might be one-dimensional. A player who can really fit perfectly to fill the void for RCB is Shakib Al Hasan. A seasoned all-rounder, Shakib can shoulder Kohli’s responsibility of being the anchor as needed and is a guaranteed four-over bowler. He can even bat at three if RCB can snap Maxwell, who would prefer batting at five.

Death overs bowling has been RCB’s historic Achilles Heel. Both Daniels Sams and Kane Richardson did well, especially at the death, in BBL this season. However, they should be looking for injury covers for Siraj and Saini. Though there are not many options available, they will have to contend with what they could. These include the released players from other sides like Ankit Rajpoot or Varun Aaron.

If RCB are able to fill the voids stated above, their best XI would appear along the following lines-