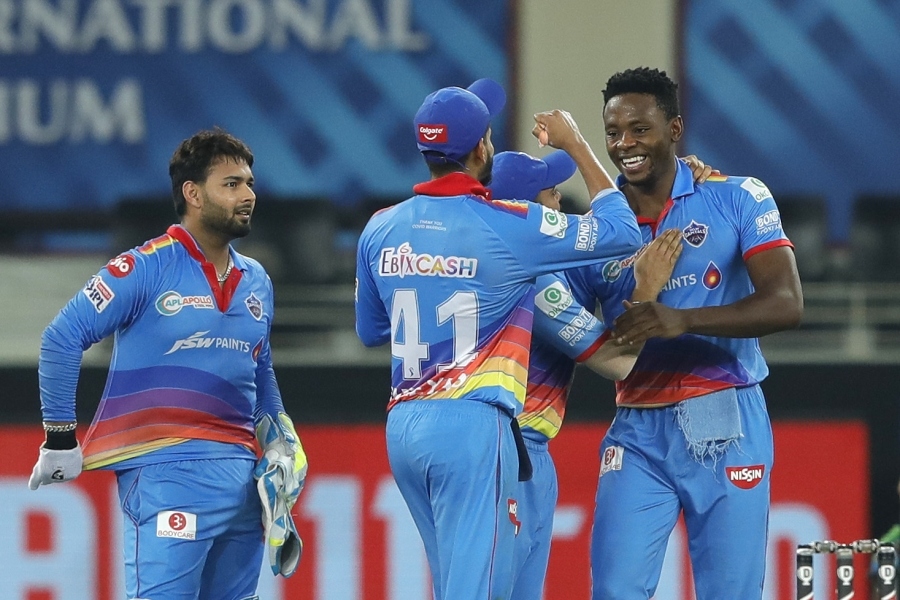 Concede runs in the death, be listless on the field, lose your top batsmen inside the first six overs of the chase. The Royal Challengers Bangalore template of yore was in full bloom tonight as they resigned to their worst-ever defeat to Delhi Capitals in the IPL going down by 59 runs.

When Match 19 of IPL 2020 started, it had all prospects of being a thrill-a-minute ride. The first half had many such moments, the second turned out to be a dampener. Delhi provided the fireworks as expected with Marcus Stoinis' half-century taking them to an above par 196/4. Bangalore then had no answers to the Delhi bowlers with Kagiso Rabada's 4/24 backed by Axar Patel and Anrich Nortje's two wickets each restricting them to 137/9.

Virat Kohli won the toss, possibly the only thing that he won today, and elected to field first. The move though backfired and how! Both the Delhi openers, Prithvi Shaw and Shikhar Dhawan started off on top gear scoring 63 runs in the Powerplay without losing a wicket. 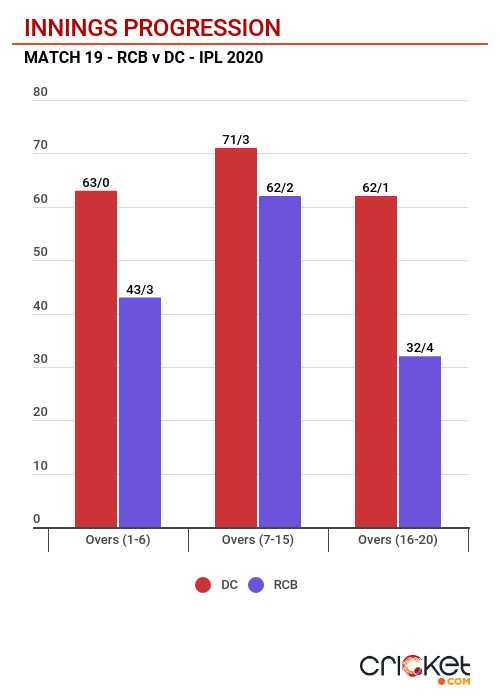 Shaw pressed his foot on the accelerator right from the first over, smashing Isuru Udana for three fours. Dhawan welcomed Navdeep Saini to the bowling crease with a cracking cover drive before Shaw opened Delhi's 6s counter with a thump over covers. Even Yuzvendra Chahal was not spared with Shaw smoking him for a four and six as the leg-spinner’s first over went for 18. Washington Sundar was the only silver lining in the Powerplay overs for Bangalore with the birthday boy conceding just 17 runs in 3 overs.

Bangalore needed some sort of inspiration to get back into the game and it came through an unlikely source. Mohammed Siraj, playing his first match of the season, bounced Shaw out with just his fourth ball with the opener only managing to glove one to AB de Villiers behind the stumps. Shaw though did his job scoring a quickfire 42 off 23 deliveries which included 5 fours and 2 sixes.

The wicket was all Bangalore needed with the bowlers putting on the brakes and not letting either of Shreyas Iyer or Dhawan settle. The frustration of not getting the boundaries got the better of Dhawan (32 off 28) who in a bid to pump Udana into the stands could only mistime the pacer to Moeen Ali at long-on. Things went from bad to worse for Delhi when the in-form Iyer too fell in Moeen’s first over. A well-flighted delivery outside off was heaved by the Delhi captain to deep midwicket, where Devdutt Padikkal brought out the juggling act to complete a fine catch. Between overs 7 to 12, Delhi only scored 31 runs and lost three wickets.

Stoinis brought some parity to proceedings as he smashed Moeen for a six and a four in the 14th over. He was not done though as he then tonked Saini for two fours and a six. With the momentum in Delhi's favour, Bangalore's Achilles heel, their death bowling once again came back to bite them.

An incident with Saini and Stoinis was switched on and how! Saini bowled a beamer to the batsman and did not apologize, something which Stoinis did not take kindly. He first whipped the bowler to the deep midwicket fence before Pant got into the act stroking Saini for a four and six. Pant did fall to Siraj for 37 but a lot of the damage was done by then. The duo added 89 runs off just 43 balls for the fourth wicket making sure Delhi reached a more than safe score.

Stoinis, with a whip in front of square, completed his second half-century of this season, reaching the landmark off 24 balls. He eventually finished on 53* off 26 balls, lacing his innings with six fours and two sixes. Delhi finished on a strong note with 196/4 on the board. For Bangalore, Siraj was their most successful bowler picking 2/34 off his four overs. But their biggest disappointment certainly was Saini who was taken for 48 runs off his 3 overs. 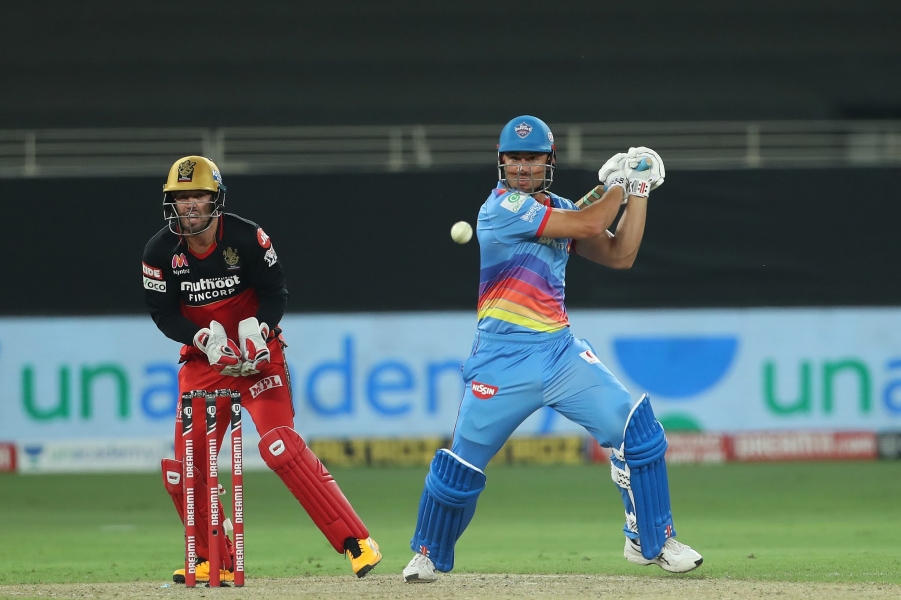 The chase for Bangalore was always going to be tough especially with the likes of Kagiso Rabada and Anrich Nortje in the Delhi ranks. And three wickets falling inside the first six overs did not make it any easy.

Rabada should have had Aaron Finch in his very first over but he spilled a relatively simple chance in his follow-through. The very next over, Finch edged a full-length Nortje delivery to Dhawan at first slip who too couldn’t hold on. Iyer rung in the changes and brought in R Ashwin into the attack and the move turned out to be a masterstroke. The off-spinner first warned Finch for backing up too far and then removed Devdutt Padikkal off the final ball of his first over for 4.

Axar Patel then sent back Finch in his first over caught behind for 13. AB de Villiers looked good during his short stay in the middle but a back of a length delivery from Nortje brought about his downfall. De Villiers couldn’t resist his attacking instincts and looking to clear the midwicket fence skied the bowler to Dhawan, who took a good catch running back. Bangalore could only manage 43/3 in the Powerplay.

With de Villiers gone and the required rate rising manifold, Kohli was Bangalore's only hope. But a combination of some intelligent bowling from Delhi coupled with a lack of intent from the batsmen in the middle overs meant Bangalore's chase went nowhere. Between overs 6 to 12, they scored only 32 runs and lost 1 wicket. During these six overs, they managed only one four. This is where Bangalore’s chase fizzled out.

Kohli did target Harshal Patel smashing him for a four and a six but Iyer brought back Rabada in the 16th over who immediately took out the Bangalore captain for 43. Bangalore's chase was as good as done with Kohli gone. Thereon, it was always going to be a case of how much would be Bangalore's margin of loss. Rabada added three more wickets to his tally to finish with excellent figures of 4/24 - the best so far this season. With that, he also became the rightful owner of the Purple Cap. Nortje castled Saini in the penultimate over before Harshal Patel completed the formalities.

With the win, Delhi moved to the top of the table with 8 points and inched ever so close to securing a playoff spot. Bangalore moved to third spot but with a run rate well in the negative, they will have to be careful.