RR, CSK and KXIP – Can they turn the table around? 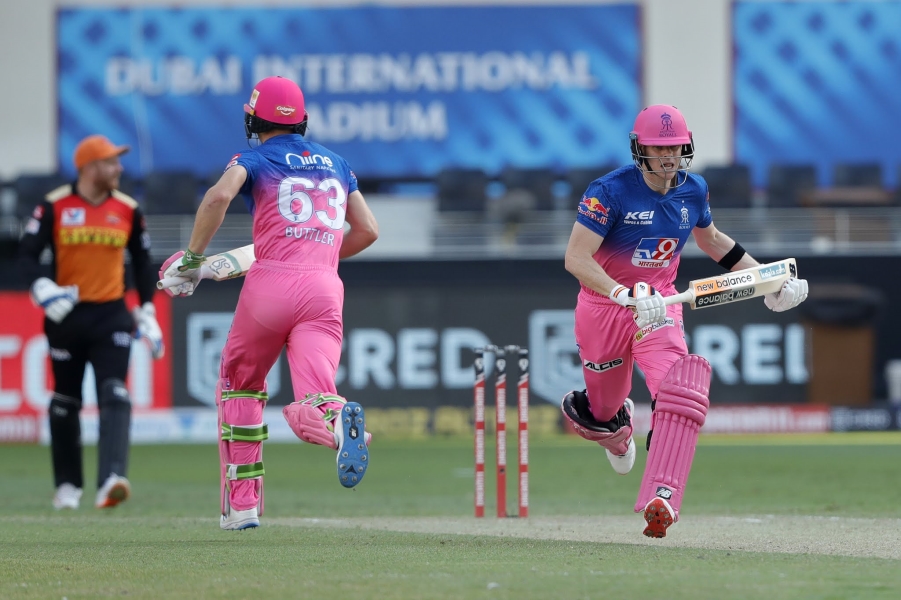 RR, CSK and KXIP – Can they turn the table around?

At the halfway mark of the league stage, MI, DC and RCB have flown ahead of the pack. The others are fighting for the last available spot. Let us look at a SWOT analysis of the main contenders. We have analyzed RR, CSK and KXIP here. For KKR and SRH refer to this article.

After starting on a high, RR have struggled to win outside Sharjah. While the youngsters have given them a lift, their overseas players have underperformed.

With the bat, RR have a high run-rate of 10.77 in the death overs in Dubai and Abu Dhabi. This is in line with the top-4 teams. Their balls-per-boundary rate of 4.5 in these two venues is also among the top-4. Tackling spin well, their run-rate of 7.69 against spin outside Sharjah is also the fourth-best.

When it comes to individual performances, two players have impressed the most. So far, Jofra Archer has been their best player. His economy rate of 5.9 outside Sharjah is the best among pacers this year. This IPL has been life-changing for Rahul Tewatia who has done well with the bat and ball irrespective of the venue.

RR have a lot more concerns than the two sides above them. They have the lowest run-rate (7.56), batting average (19.7) and balls per dismissal record (15.6) among all teams outside Sharjah. 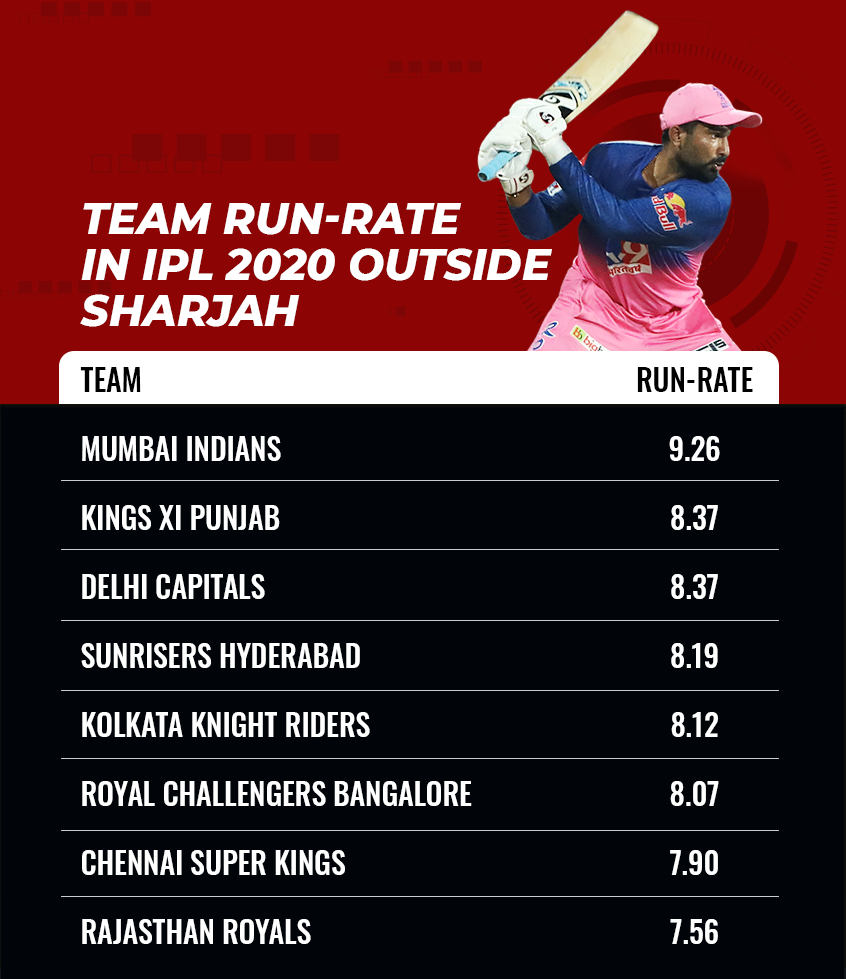 Despite having foreign firepower at the top, their run-rate of 6 in the Powerplay in Dubai and Abu Dhabi is the least. Moreover, their balls per dismissal of 18 in the first six overs across all venues is lower by at least seven balls in comparison to other teams.

Struggling against pace, they have the lowest balls per dismissal (13.8) and batting average (19.9) against pace irrespective of the venue.

With the ball, they have struggled the most to take wickets at the two venues. Their balls per wicket record of 29.7 outside Sharjah is the highest. The struggle is similar for both pacers and spinners.

Their biggest let down has been the performance of Shreyas Gopal so far. He has four wickets in seven games and an economy of above 8 even outside Sharjah.

With Ben Stokes back in the side, the balance of the team improves. Also, Riyan Parag hit form in their last game against SRH and can play a cameo now and then.

In terms of using the resources, Robin Uthappa averages 10.2 in the five innings so far batting in the unusual role of a middle-order batsman. That is a position wasted. Either he should open or can make way for a youngster.

RR need to win five out of the last seven. None of these matches are at Sharjah, their preferred venue. After a good first two matches, the form of Steven Smith and Sanju Samson has dipped after the games have moved out of Sharjah. They will need them to come good again.

After a disappointing start to the season, the win against SRH uplifted CSK. The performance was like CSK of old, fighting to score or save every run. To qualify from here on they need more of the same.

As a collective unit, CSK have been mediocre so far and do not stand out on any parameter. However, they do have some notable individual brilliance in their mix.

After eight games, Faf du Plessis is the third-highest run-getter in the tournament so far. He averages above 50 with a strike-rate above 145, both better than an average CSK batsman.

With the ball, the surprise for CSK has been the performance of Shardul Thakur. Flexible to bowl in any phase, he has taken a wicket every 13.5 balls and has an economy of 8.3 which is decent considering he bowls at the death as well.

The player of the tournament for CSK so far has been Sam Curran. Shining with bat and ball, he has a batting strike-rate of 190.4 and their leading wicket-taker so far.

As mentioned earlier, CSK have been mediocre as a team with bat and ball. Their run-rate of 8.22 and bowling economy of 8.61 is among the bottom four teams.

While their run-rate of 7.17 in the Powerplay is the lowest, their scoring-rate of 7.44 in the first 15 overs is better than only RCB (7.27). The old formula of taking it deep leaves too much for their batsmen to do at the death.

With the ball, CSK’s economy rate of 7.98 in overs 1-15 is better than only RR (8.42) and KXIP (8.01). The biggest disappointments with the ball this season have been Deepak Chahar and Ravindra Jadeja. Both are averaging 30 and 34.5 balls per wicket as of now. Jadeja’s economy of 8.7 is also well below CSK standards. 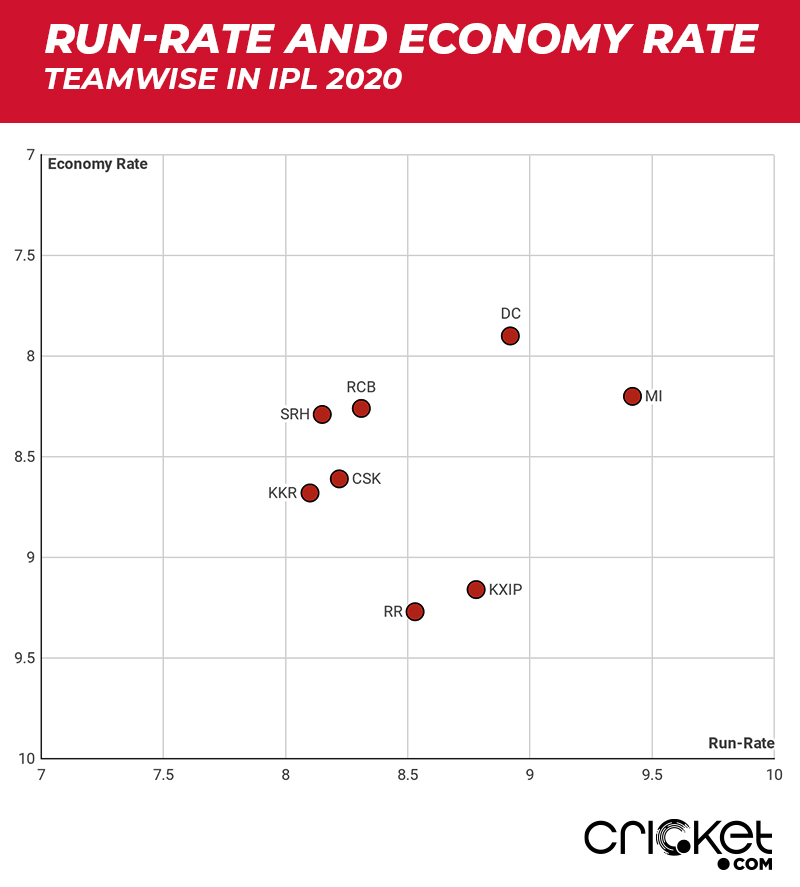 Before the inclusion of Karn Sharma in the XI, CSK spinners had the worst economy rate as a team. This was contrary to their dominance by spin all these years. However, Karn has done well so far taking four wickets in three games and bowling at a decent economy of 8 runs per over.

CSK’s decision to send Curran to open in the game against SRH proved to be fruitful. An attacking approach at the start infused them with momentum and helped every batsman to bat freely from then on.

History is on their side as three teams – MI in 2015, KKR in 2014 and CSK themselves in 2010 rose after being seventh at the halfway mark to not only qualify to the play-offs but also lift the trophy.

For an assured spot in the top four, CSK need to win five out of their remaining six games. Two of these matches are against DC and MI at Sharjah. As these two sides have better power hitters than CSK, these matches can prove to be tricky.

KXIP still have a mathematical chance of qualifying. But, for all practical purposes, they are out of contention unless a miracle.

As of now, KXIP will need to win all their remaining games to be safe. This is not impossible but looking at the options in their squad it seems unlikely.

KXIP have tried all their experiments barring Chris Gayle who will only distort their opening pair if he comes in. Moreover, to try to push for wins, their leadership group need to accept that in a game of scoring most runs in 120 balls, strike-rates are not overrated.

All numbers updated until Match 29th on 13th October.