Selection of spin pair, another headache that beckons India 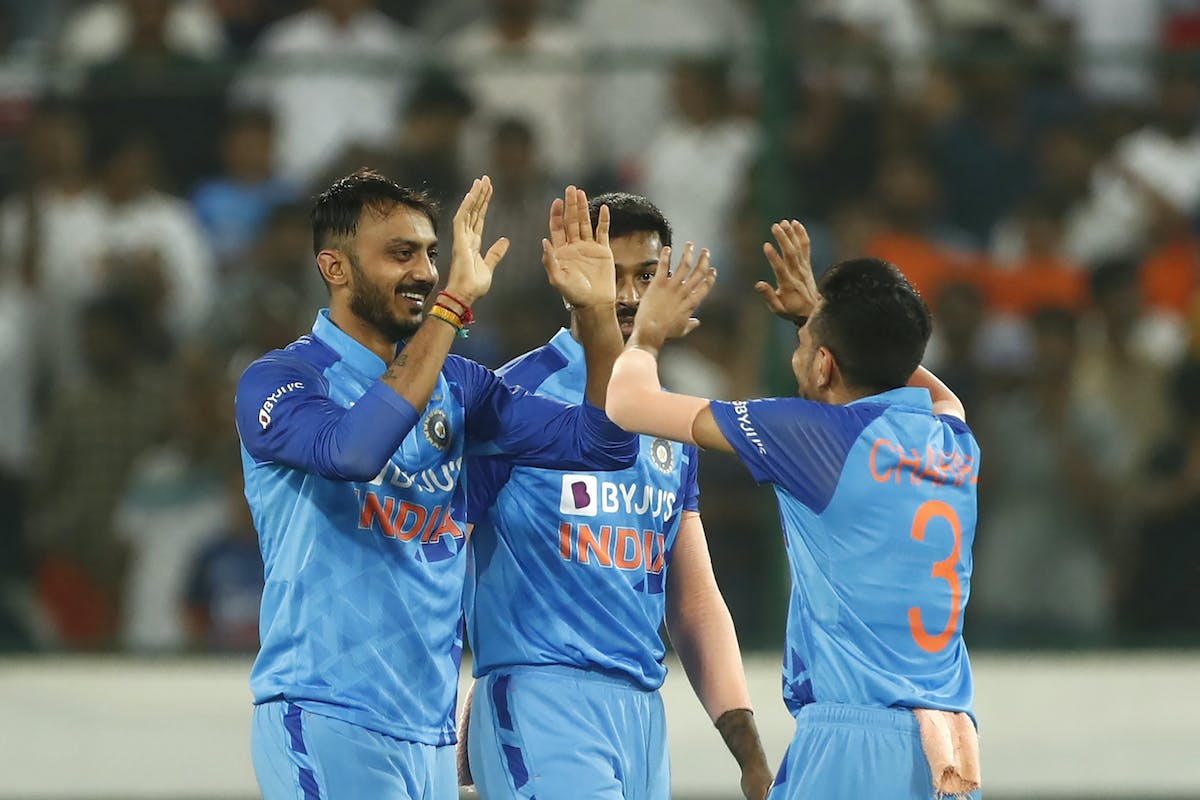 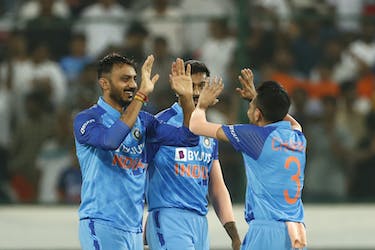 Selection of spin pair, another headache that beckons India

Well! The selection headache in the bowling department for India isn’t just in the pacer’s perspective. With Axar Patel a sure-shot starter in the playing XI, the one other spinner's spot is in jeopardy. Will India go with Yuzvendra Chahal, their attacking spinner, or Ravichandran Ashwin to bring in variety?

As a surprise, will they go with three spinners? Or ditch both Chahal and Ashwin and go for Deepak Hooda? With each spin combination, India has its own pros and cons:

In an ideal world, the combination of Axar and Chahal is tailor-made. Axar is more of a bowler who looks to contain runs, and if he manages to do that, batters are forced to go against Chahal. Even if Chahal goes for runs, there is a high chance of him picking up wickets. Not to forget, he has a natural advantage in the form of ground size. 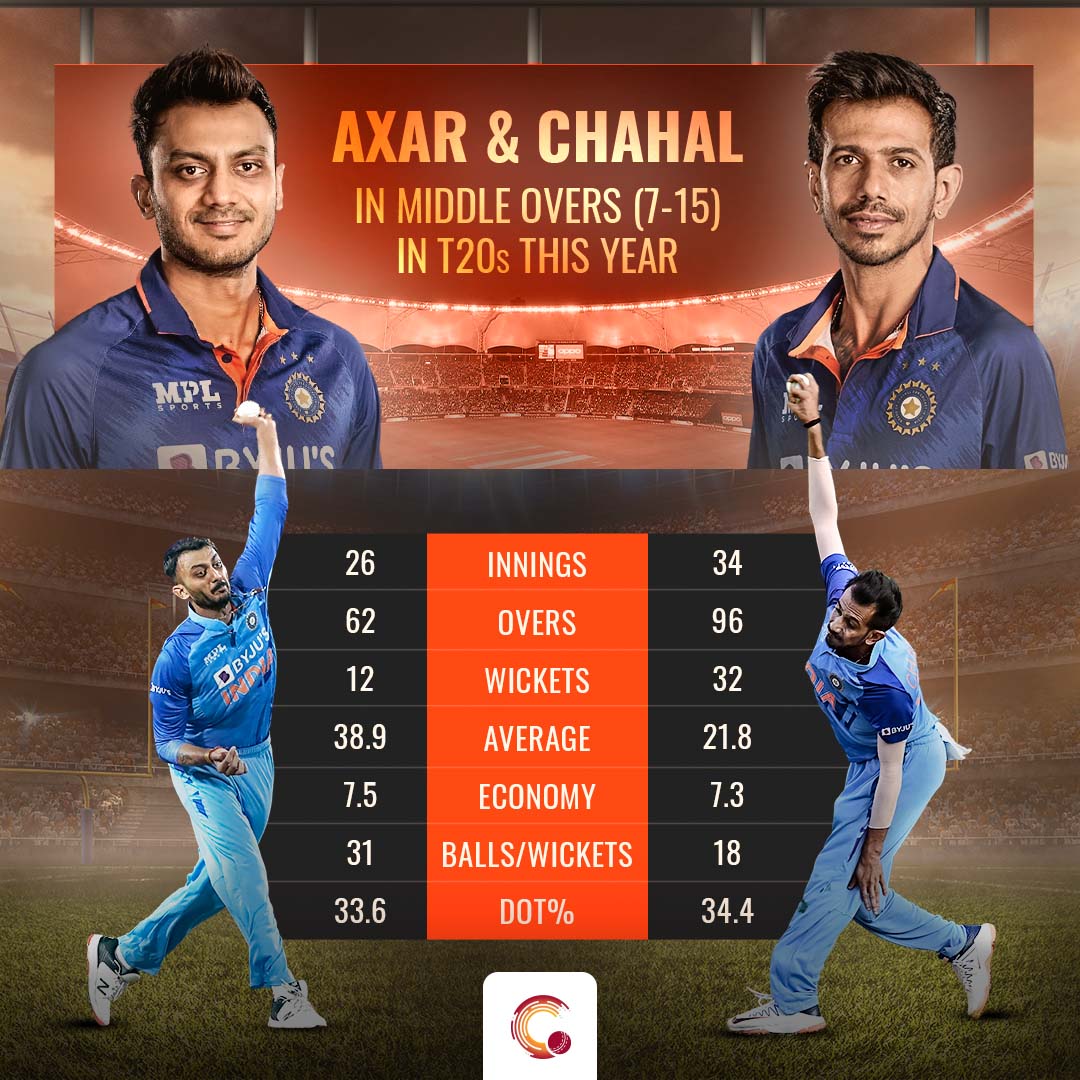 However, the only concern is both are similar type of bowlers. Against left-handers, both bring the ball in and take it away against the right-handers. The three confirmed teams in India’s group are Pakistan, South Africa and Bangladesh, they all have at least two left-handers in their middle order (3-6). If we remember the loss against Pakistan in the 2022 edition of the Asia Cup, something similar happened. Mohammad Nawaz was promoted ahead, as there were no Ashwin, and he took the game away from India.

With a left-arm spinner and an off-spinner, there will be variety, and both bowlers can be used in the powerplay. The other main aspect of this combination, irrespective of the batting composition, they will provide control in the middle overs.

In T20s this year, Ashwin has an economy of 6.8, and Axar concedes at 7.5 in overs 7-15. With Ashwin in the ranks, it adds more depth to the batting department. 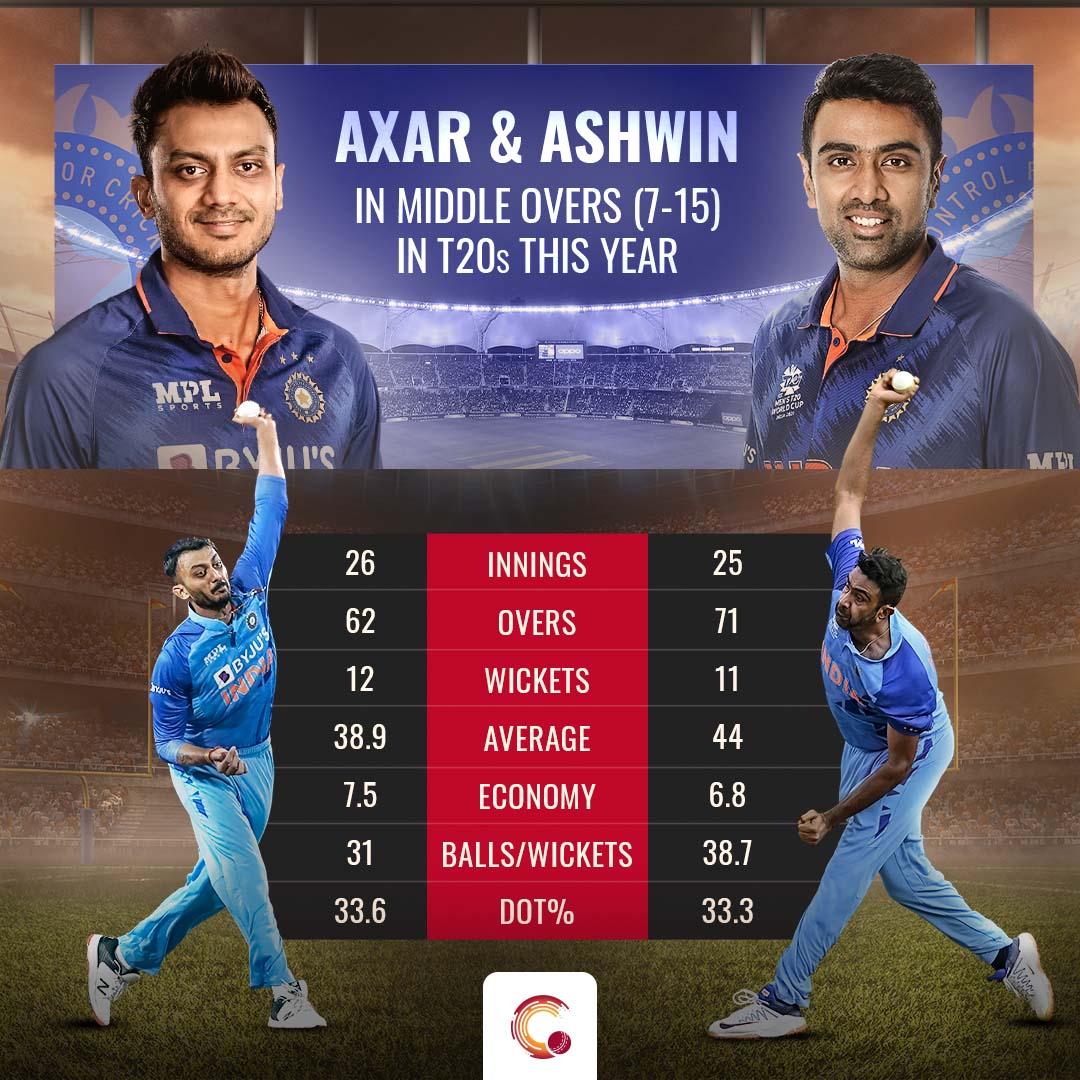 Apart from being a defensive pair, nothing goes right for India with the combination of Axar and Ashwin. Their economy in the middle overs is commendable. But both lack when it comes to picking up wickets in this phase.

Outside Asia, in the last five years, the only country in which India have gone with three spinners in a match has been West Indies. The last time they played with three spinners in Australia was in 2016. However, at that time, India had the luxury of batters who could bowl with Suresh Raina and Yuvraj Singh in the mix. From number four to number 11, apart from Dhoni, all had the capacity to roll their arms.

The other option is a bit wild, at least for India. Ditch both Ashwin and Chahal, and play Deepak Hooda as India’s sixth bowling option. With this, India can feature all their four fast bowlers and Hardik Pandya as the fifth. With an extra bounce in Australia, this combination can be more suitable than three spinners.

However, the biggest problem is that India have only four pacers in their whole squad. If they play all four of them, there is a risk of injury. In the history of T20Is, only once have India gone with five pacers (bowling 1+ over in an inning), and that came this year against West Indies in Kolkata.

Which type of spinners are better suited in Australia?

The value for leg spinners in Australia is off the roof. In each of the venues, they are the major contributors among the spinners. 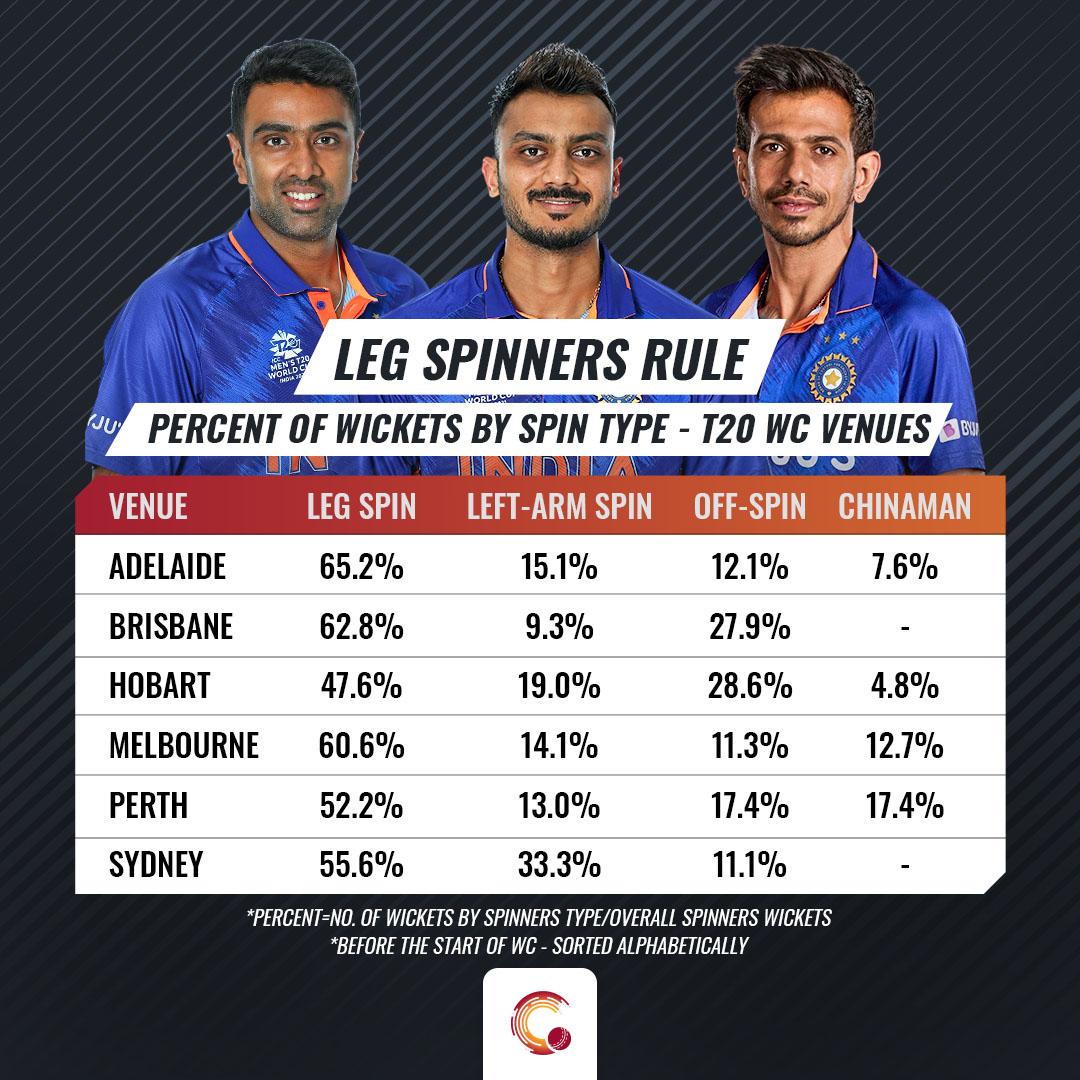 Overall in the venues allotted for the T20 WC, leg spinners have bagged 154 wickets at an average of 22.9 and balls/wicket ratio of 17.6 in the aforementioned time. Among all the bowling types, leg spinners' average of 22.9 is the best (before the start of WC). Economy-wise, left-arm orthodox have been the most successful one. In all aspects, off-spinners have struggled.

Just going by the numbers, can we confirm that Axar and Chahal are the right choices? Or does India have different theories? We’ll know on 23rd October.