Should India look beyond Kohli in T20Is? 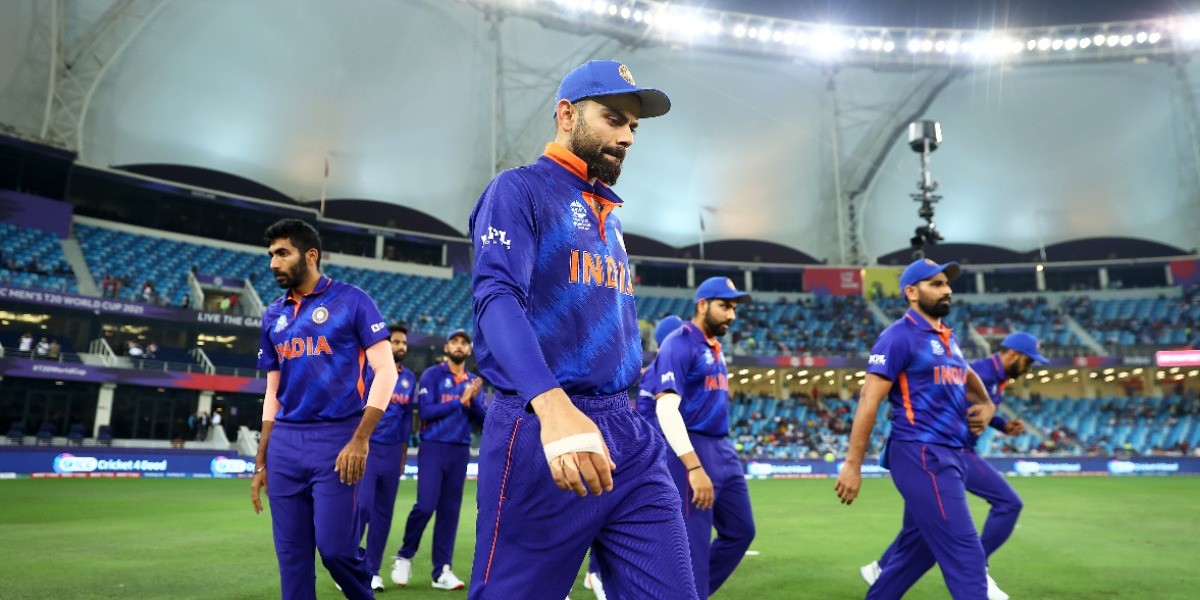 Should India look beyond Kohli in T20Is?

The thought of it is sure to raise eyebrows. But there are valid arguments on both sides.

There are two schools of T20 batting. One is to look at it as a condensed version of the 50-over game. Starting with caution, keeping wickets in hand and going gung-ho later. In this version, a batsman walking in at six for two goes for safety first and the side often ends up with a par score even on a good batting wicket. This is the school of thought that preaches limiting dot balls.

Then there is the school in which the batsman walking in gives zero f@#!& about the score. Here teams either fall way below the par score or are able to swim the early rough tide to sail above par. The West Indies were the early adopters of this all or nothing approach. England stole the idea from their playbook and made themselves the most threatening side in the world. In this method, dot balls are irrelevant as long as there are 25-30 boundaries in an innings.

Now, it does not really matter what approach you take if you are chasing. The target sort of lays down the approach for you. But, the reason why T20 cricket is moving in a predictable direction of chasing side winning more games is that the teams batting first often adopt the first approach. In the two semi-finals and the final, the score in the first innings after the first 10 overs was 67/2, 71/1 and 57/1. The chasing side won, but the side batting first lost the game in their first 10 overs.

It all comes down to the structure of the side. Whether there is a need for an anchor in T20s has been a perennial debate. And India, for all their strengths, have usually faced criticism for filling their sides with more than one. Like in the World Cup, they had both Rohit Sharma and Virat Kohli. In their game against Pakistan and New Zealand, India were 60/3 and 48/3 at the halfway stage, with Kohli at the crease on both occasions. A point from where even after keeping wickets in hand, getting to an above par score was nay impossible.

“Whatever he has been doing, his role will be the same. He is a very important player for the team. Based on the games we are playing, roles will keep changing. When he comes back, it will only strengthen us.” This is what Rohit said about Kohli before the start of the T20Is against New Zealand.

Looking up to the next World Cup, one of the biggest questions that India will need to address is whether to stick with Kohli and work with what he brings to the table. Or to move past him and infuse a fresh approach in the middle-order. Based on what Rohit said ahead of the series against New Zealand, Kohli is not going anywhere. But, his inclusion is debatable. And there are valid arguments on both sides.

Given we are raising a question that has lingered in the minds of many, let us first look at why have there been Kohli’s spot is under a scanner in the first place:

Con 1. A significant drop in numbers since 2020

From the year 2016 when he was at the peak of his powers till about 2019, Kohli was the undisputed best all-format batter. However, since the pandemic stricken-year 2020, Kohli’s strike rate has come down drastically.

The biggest contributor to this is his conservative approach against spin. In the year 2021, his strike rate against the tweakers is not even a run-a-ball at 91.4. 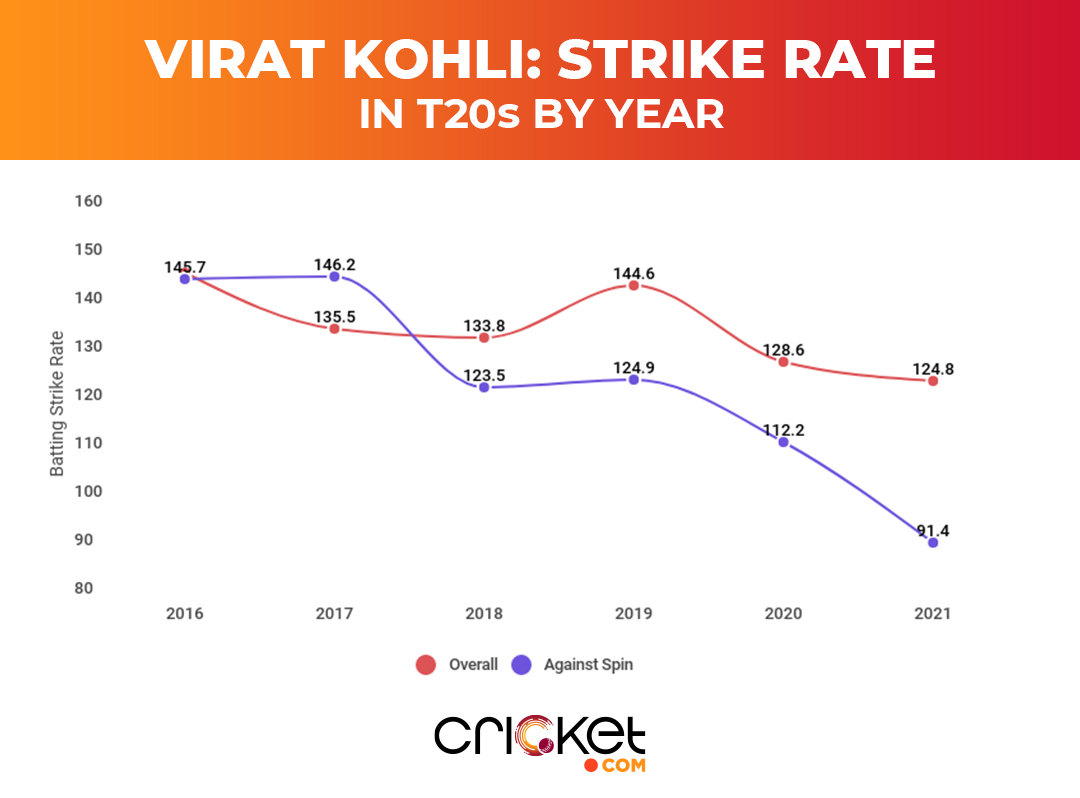 For teams, it has become easy to tame Kohli. Being a middle-order batter, it is paramount for him to be dominant against spin to ensure the team makes the most of the middle-overs. But, as things stand, he has been more of a liability. In numbers that might lead you to rub your eyes to believe if they are correct, his strike rate in overs 7-15 in the recent T20 World Cup was a mere 79.4.

And this is not the end of it. Kohli’s struggle against spin has been so tragic that among all the batters in the fray for the Indian side, Kohli has had the lowest strike rate against spin since 2020. 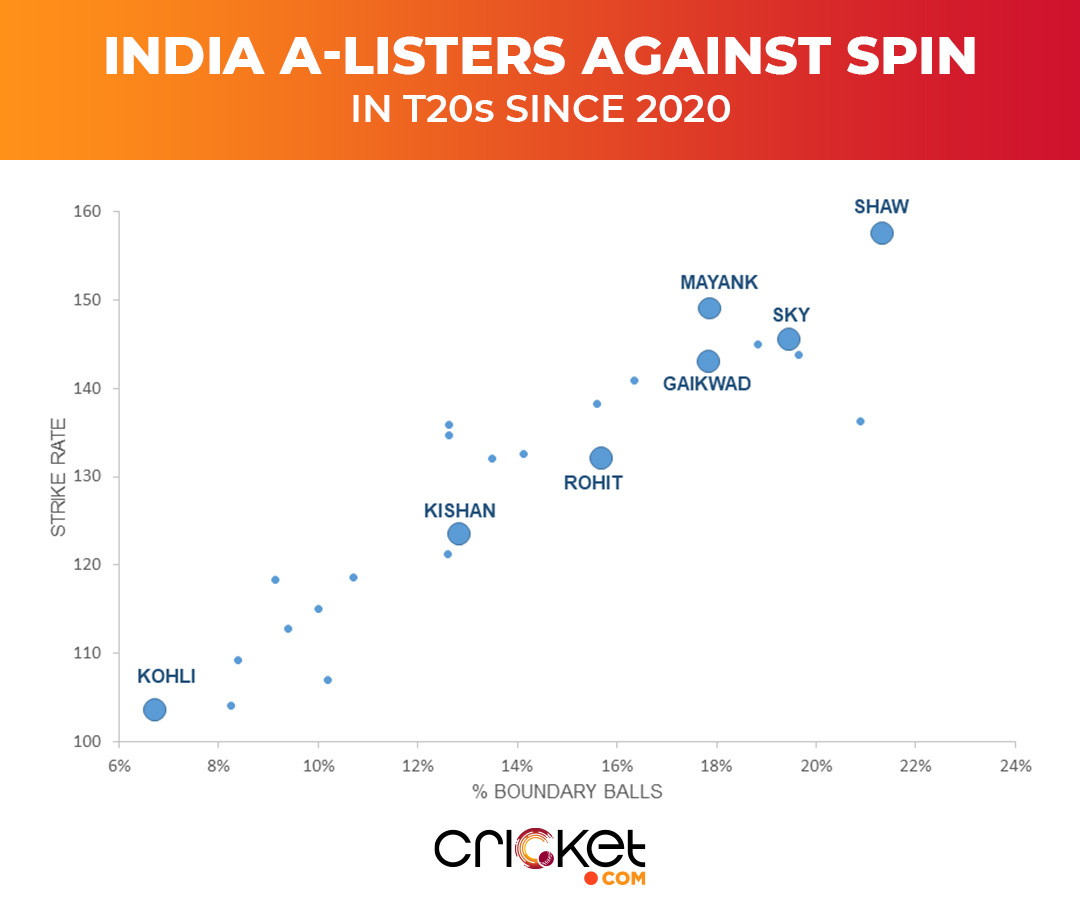 Hindering him is a low boundary% which as expected, is the lowest among all. He is the ambassador of the first school of T20 batting, consolidate first, limit dot balls and attack after safety beckons. There are players who have been spin bashers like SKY, Mayank and Gaikwad. Then there are those who have been above average like Rohit and Kishan. And then there is Kohli, who we are not used to seeing at the bottom of any batting index.

Now Kohli has the potential to turn his numbers around in the next 11 months. But then, he continues to be India’s most important batter in the other two formats. The reason for him to leave captaincy in T20Is and the IPL was to turn himself off from time to time.

Giving up T20Is altogether might allow him to shift his focus completely on the other two formats. And it will also help the side to have a decent amount of time to rebuild before the next big event, get a youngster in the middle-order with all bases covered to avoid last-minute knee-jerk reactions that have been an Indian characteristic in the last two white-ball ICC tournaments.

Now, on the other side of the debate are the reasons why Kohli should be there in the side when India travel Down under in 11 months’ time. And first of them is Australia being Kohli’s second home.

Whenever there have been doubts over Kohli’s abilities, Australia has always come to his rescue. Remember 2014, when a twin hundred in Adelaide put a rest to the nightmares of England six months before that? 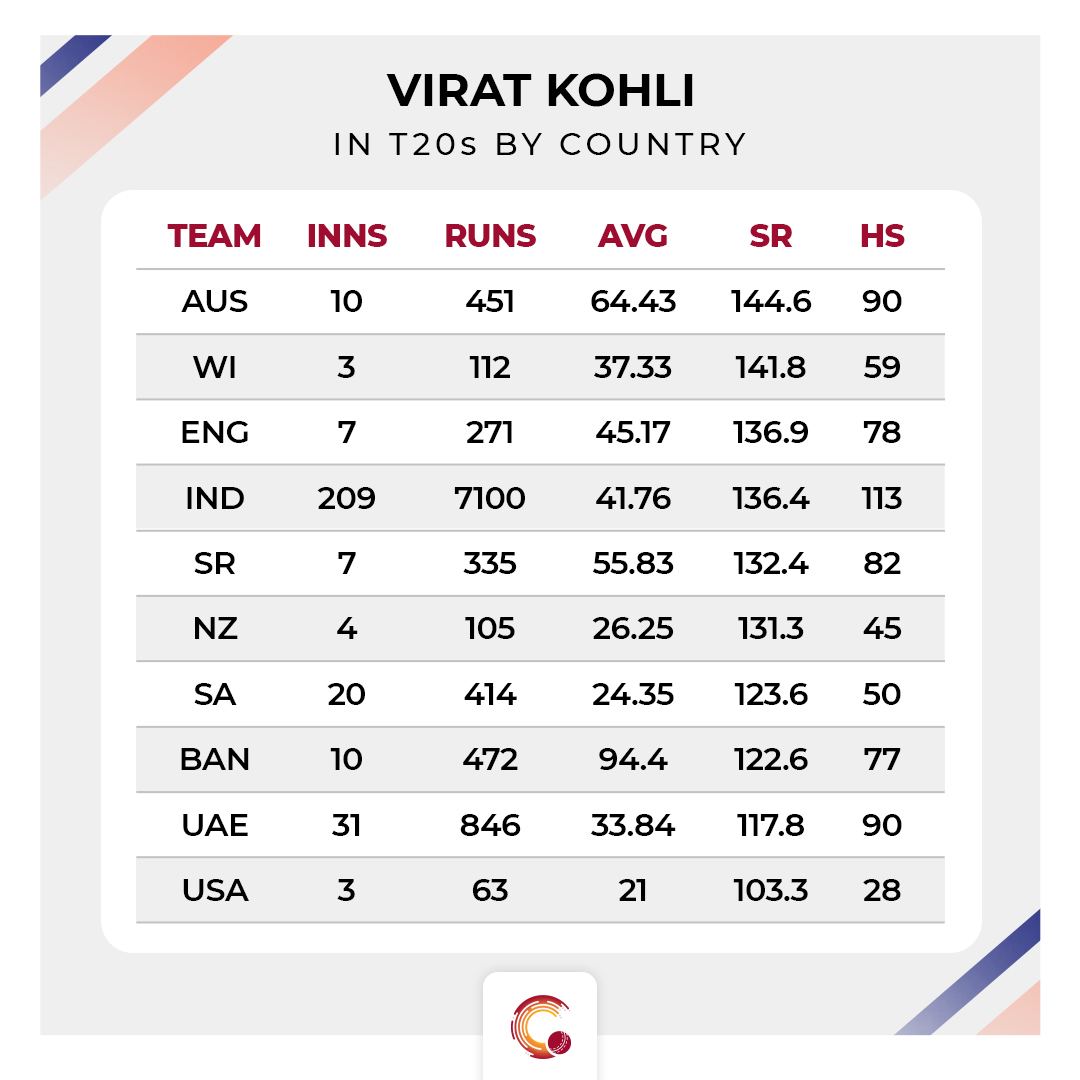 Kohli’s love affair with Australia has continued in T20s as well. Among all the venues he has played T20 in, he has had the best strike rate in Australia. And even the average has been the second-best after Bangladesh. Even in an otherwise tough year, Kohli had a strike rate of 142.6 across three T20Is in Australia in 2020.

For young players, Australia can be an intimidating place. That is when India can utilise Kohli’s experience of the country and also of batting in high-pressure games.

What makes Kohli thrive in Australia is his ability against pace. Even in the two sedate years since 2020, his strike rate against pace has been a good 143.7. 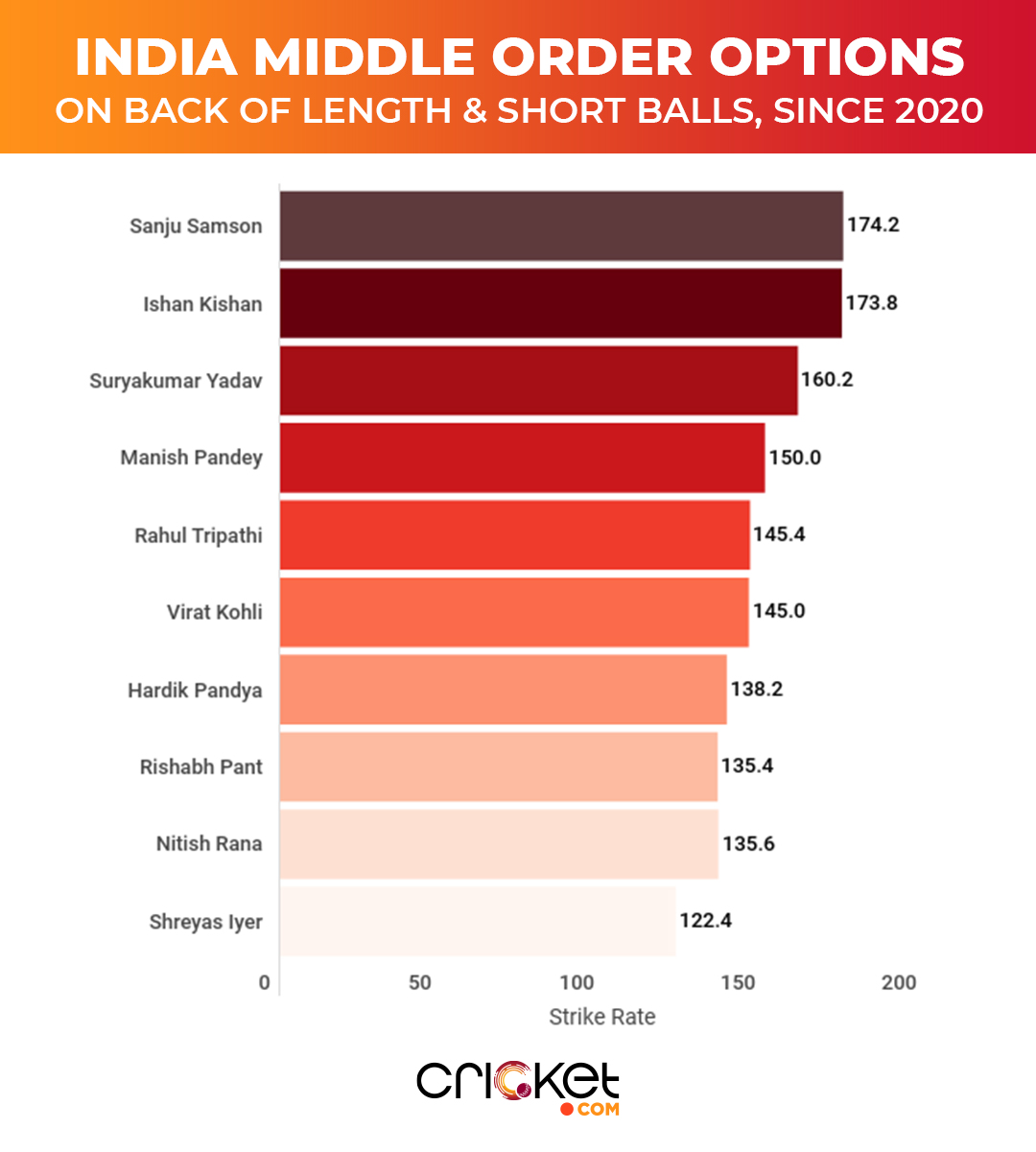 In Australia, the go-to length of the pacers will be back of a length or short. A length at which even in his duller years, Kohli has had better numbers than players who are a near certainty in the squad in Rishabh Pant, Hardik Pandya and Shreyas Iyer. And then there are youngsters like Sanju Samson and Ishan Kishan who have been even better than Kohli at it. But, will they be able to replace the proven brilliance of Kohli in one of the toughest places to travel, only time will tell.

For now, the new leadership has not given up on Kohli yet. Shedding the default approach of going for safety first will take some time to take effect. The next World Cup will be upon us in a blink of an eye. Perhaps, the only one for the new captain-coach combo.