In December 2017, Steve Smith scored his 23rd Test century and then said: “I don’t actually like watching cricket that much and would prefer to be out there batting and just getting the job done.”

And boy did he get the job done! Fighting back tears, Smith kissed the badge on his helmet as he reached his 24th century courtesy a flowing cover drive off Ben Stokes on Thursday.

It was a man exhibiting sheer relief and a massive surge of emotions considering the ordeal he faced in the aftermath of the Sandpaper gate.

Determination was his most valued asset throughout his innings as he mixed caution with aggression to score 144 and give Australia (284) a fighting chance in the first Ashes Test.

It is usually a case of the big stage getting to players, but day one was testimony to the fact that umpires feel the heat too, and going by what panned out, maybe they felt it more than the players themselves.

The World Cup was rife with scores of poor umpiring decisions and it was disheartening to see that The Ashes hasn’t been spared either.

But fortunately, Smith’s master class shifted the focus back to cricket as the Birmingham sun set gently.

The former Australian skipper took his side from 122/8 to – giving them a morale boosting edge going into day two.

If early hype surrounded the much-awaited return of the Australian tainted trio – Warner, Smith, and Cameron Bancroft – it was the below-par umpiring that fuelled the experts’ debates by the end of the day.

Opting to bat first under overcast conditions, Warner and Bancroft strode out in what must have been a welcome relief for them after months of not donning the Baggy Green.

Bancroft looked like he had taken a leaf out of Steve Smith’s book, shuffling towards his off stump, in an attempt to negate James Anderson’s swing. It was not most pleasing on the eyes but the right-hander survived.

Warner tried to flick Broad on the leg side and got a feather to Jonny Bairstow behind the stumps. Umpire Aleem Dar remained unmoved and the English decided against a review.

Still licking their wounds and ruing not taking the DRS, one over later they challenged the umpire after Warner was hit on the pads, but it looked high to the naked eye and Hawk-Eye confirmed.

Warner was facing a baptism by fire on his return and Broad ended his nightmarish ordeal four balls later. Another poor umpiring decision, this time not reviewed by Warner.

Such was his mindset that the former Australian vice-captain walked off without even consulting non-striker Bancroft. His exit left a sour taste in the mouth after a section of fans booed him off while holding aloft pieces of sand paper.

Bancroft and Khawaja left in quick succession leaving Australia in tatters at 35 for three.

There were always doubts about Australia’s middle and lower order, and in the post-lunch session, they rarely put up a fight barring Smith who was waging a lone battle.

That, though, didn’t deter the hosts as Australia went from 99 for three, to 122 for eight with Broad, Woakes, and Stokes all chipping in.

Great players always rise when the chips are down and Smith, undoubtedly one of the best of this generation, proved his weight in gold as he began stitching a partnership with Peter Siddle.

Siddle has been with Essex in the County Championship for the last two years and his invaluable experience of the conditions probably helped as Australia went into the tea break with 154 on the board.

A temporary rain interruption appeared to have taken the sting out of the English attack with the pitch surprisingly looking a lot more docile than it originally was.

The duo raised 88 runs thereby making it the highest ninth-wicket partnership for Australia in an Ashes series in England since 2001.

With Smith at the crease, Australia still weren’t done and surged to 284, Nathan Lyon contributing just 12 in 74-run stand.

Broad picked his 100th Ashes wicket and seventh five-wicket haul as he ended Smith’s marathon effort with a straight delivery that smashed into off stump.

England then survived a tricky two over spell under lights ending the day on 10 for no loss. Whatever be the result of the series from here on, it was a day that saw Smith firmly send a message to the cricketing world that he is back, with an undiminished hunger. 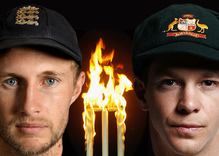