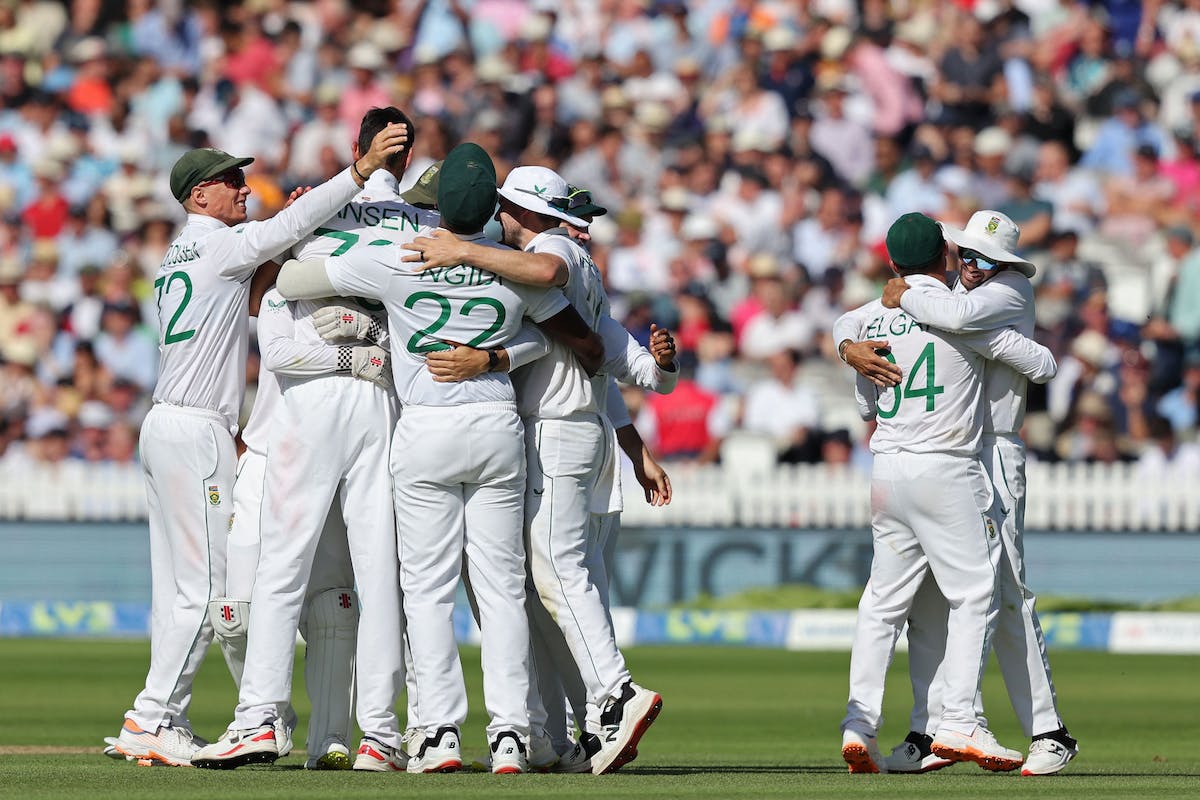 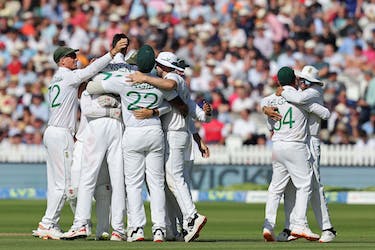 South Africa inflicted England's first defeat of the 'Bazball' era as they won the first Test by a crushing innings and 12 runs with more than two days to spare at Lord's on Friday (August 19).

England were dismissed for 149 in their second innings before tea on the third day, with the Proteas effectively winning the game in six sessions after most of Wednesday's first day was lost to rain.

Left-arm spinner Keshav Maharaj struck twice before fast bowler Anrich Nortje followed up with a superb spell of three wickets for no runs in 10 balls as the Proteas, leaders of the World Test Championship table, took a 1-0 lead in a three-match series.

England had won all four of their previous Tests under the new leadership of captain Ben Stokes and coach Brendon McCullum, after whom 'Bazball' is named.

Each of those wins, however, came after batting aggressively in the fourth innings, rather than having to set a total and before this match, South Africa captain Dean Elgar questioned whether a policy of all-out attack would work against his formidable bowling line-up.

"Anrich Nortje's spell just broke the back of the England innings," said Elgar at the presentation ceremony after the Proteas had skittled out the home side in under 37.4 overs

"He ran in with a lot of intent and anger It was great to watch from where I was standing, and I'm sure it wasn't nice to face."

South Africa now have a couple of extra days rest before the second Test at Old Trafford starts on Thursday, with opening batsman Elgar adding: "We'll enjoy tonight, I'm sure. It is Friday after all."

Stokes, who took over as skipper from Joe Root with England having won just one of their 17 previous Tests, said it would be "silly" for him to be anything other than disappointed.

But the all-rounder added: "We know, when we perform to our capabilities, we can put in some incredible performances, like everyone's been able to see in the four games before this one.

"This isn't a wake-up call or anything like that, just unfortunately we weren't able to execute in the way we wanted to play this week and South Africa were better than us. "

Maharaj, who didn't bowl at all in England's meagre first innings 165, sparked Saturday's slump by removing Zak Crawley and Ollie Pope during a remarkable pre-lunch spell of 2-6 in three overs.

Maharaj was brought on as early as the seventh over in a tactical coup by Elgar, struck with just his third ball when he had Crawley lbw for 13 after the struggling opener missed a sweep.

Pope, whose 73 was the lone fifty of England's first innings, was then lbw to Maharaj off the last ball of the session as he looked to work the ball legside. England, 38 for 2 at lunch, were 57 for 3 soon afterwards when paceman Lungi Ngidi had star batsman Joe Root caught in the slips by Aiden Markram for six.

Jonny Bairstow came into this match having scored four hundreds in as many Tests only to be caught behind for 18 off express quick Nortje on Friday. Left-handed opener Alex Lees, dropped on four, had ground out an unconvincing 35 when he too edged Nortje to wicketkeeper Kyle Verreynne.

Two balls later, England's 86-5 became 86-6 when Ben Foakes fell for a duck, a careless waft outside off stump presenting opposing gloveman Verreynne with another simple chance.

Broad, with little to lose, hooked Nortje for six in sunny conditions ideal for batting despite taking his eyes off the ball. But fast bowler Kagiso Rabada, who took an excellent 5-52 in the first innings, got Broad with a clever slower ball the tailender chipped to Elgar at mid-off to end an entertaining 35 -- the joint top score of the innings.

England then lost two wickets in two balls, Matthew Potts bowled by Marco Jansen before Stokes (20) was brilliantly caught in the deep by Maharaj off player of the match Rabada.

Player of the match: Kagiso Rabada