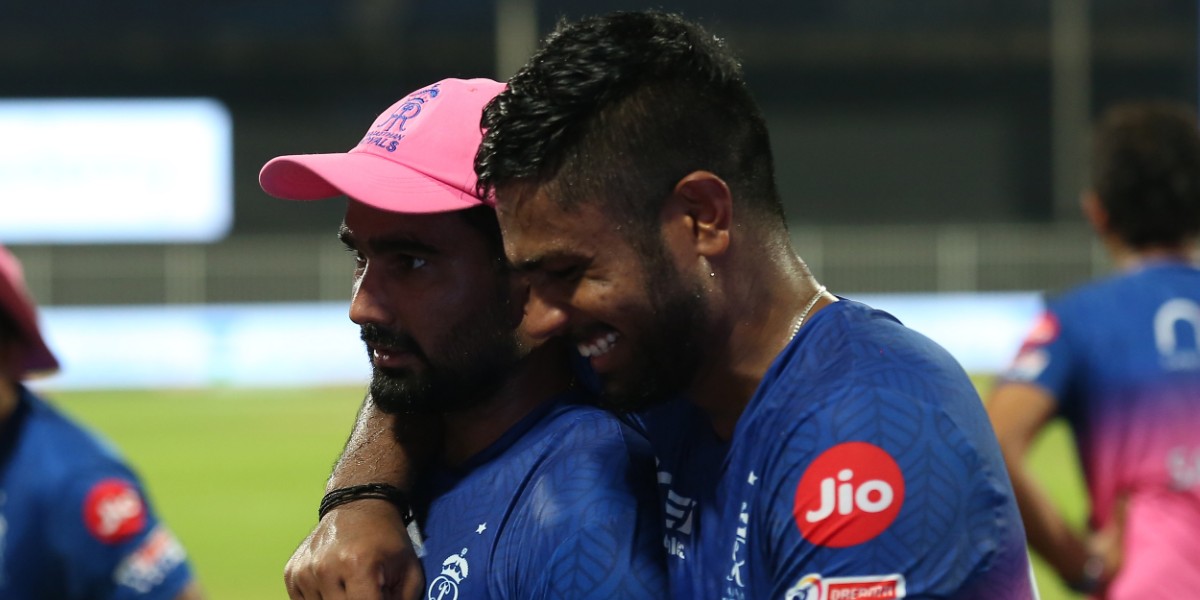 Match 1: No Ben Stokes! No Jos Buttler! Rajasthan Royals, who don't have a single Indian 'superstar' in their squad, were without two of their best players against Chennai Super Kings in their season opener, and what do they do? They completely outclass the three-time champions in a high-scoring affair.

Match 2: Buttler comes back but gets out for just 4 in a 224-run chase, and what do Rajasthan do? They refuse to throw in the towel and keep fighting, eventually smoking 86 runs in 4.3 overs to pull off the highest successful run chase in the league’s history.

Enough about the team, let's talk about the individuals, the real 'superstars' who played massive roles in these two victories. Skipper Steve Smith has led from the front, while Sanju Samson was Player of the Match in both these games. Jofra Archer has chipped in with two ferocious cameos, but it's Rahul Tewatia who has become the talk of the town after his emotion-filled exploits against Punjab on Sunday.

Rajasthan are riding high on confidence but they won't have it easy against Kolkata Knight Riders on Wednesday (September 30) in Match No. 12 of the Indian Premier League 2020. The Rajasthan batsmen had a gala time in Sharjah but that might not be the case in Dubai because of the size of boundaries. On top of that, they will be up against Dinesh Karthik and Co. who schooled Sunrisers Hyderabad in their last encounter.

The Dubai International Cricket Stadium has so far hosted five games this season and amongst three venues, it has the lowest batting average. The boundaries are much bigger and Rajasthan might find it difficult to adjust considering they have played both their games in Sharjah. However, make no mistake, there have been three 200-plus scores registered at this venue this edition, with two of those coming in the last encounter played between Royal Challengers Bangalore and Mumbai Indians on Monday.

Both Rajasthan and Kolkata however have some big hitters but they will have to be slightly more cautious. The RCB-MI game also displayed why it's so important to have a left-right batting combination, as it will allow one of them to target the shorter boundary.

Sanju Samson and Shubman Gill haven't yet cemented their place in the national set-up but the two are unarguably the best Indian batsmen in their respective franchises. Both of them bat up the order and have already made match-winning contributions.

Let's talk about Samson first. The right-hander from Kerala is still only 25 but he has been around for quite some time now. Every IPL season, or even in the domestic tournaments, Samson comes up with a couple of unbelievable innings but the wicketkeeper-batsman always fails to maintain that consistency. This is Samson's eighth IPL season but not once he has managed more than three 50-plus scores in one edition. The Kerala batsman has started the IPL 2020 with a bang, smashing scores of 74 and 85 against Chennai and Punjab respectively. Samson however will have to keep scoring runs and have that "huge prolific season" if he wants to graduate to the next level.

Meanwhile, Gill has completely transformed himself ever since he was promoted to open the innings. The stylish right-hander from Punjab averages over 52 in the eight innings he has played as an opener. The 21-year-old is much more consistent than Samson and could very well own this season. After failing to score big in Kolkata's first game of the tournament, Gill crafted a steady 70* against Hyderabad and helped his team chase down 144 after being reduced to 53 for 3. Gill would now look to keep his form going and would be eager to prove himself against Archer and Co.

THE EXTRAVAGANZA OF OVERSEAS STARS

Both Kolkata and Rajasthan have foreign players who are outright match-winners. They haven't yet taken centerstage but both sides will need them to fire as the tournament progresses. Smith has been superb for Rajasthan up the order, having smashed consecutive fifties at a strike rate of over 160. Meanwhile, Archer hasn't contributed with the ball in hand but the dasher has made up for it with a couple of match-winning cameos. Rajasthan are surely missing the services of Stokes as David Miller and Tom Curran haven't yet lived up to the expectations.

For Kolkata, Andre Russell is yet to fire but the likes of Eoin Morgan, Pat Cummins and Sunil Narine have contributed in their own way. Morgan, along with Gill, guided Kolkata to victory against the SRH, while Cummins (v SRH) and Narine (v MI) had decent outings too. It won't be a bad idea to bat Russell slightly up the order against Rajasthan and give him some batting time before the competition intensifies. 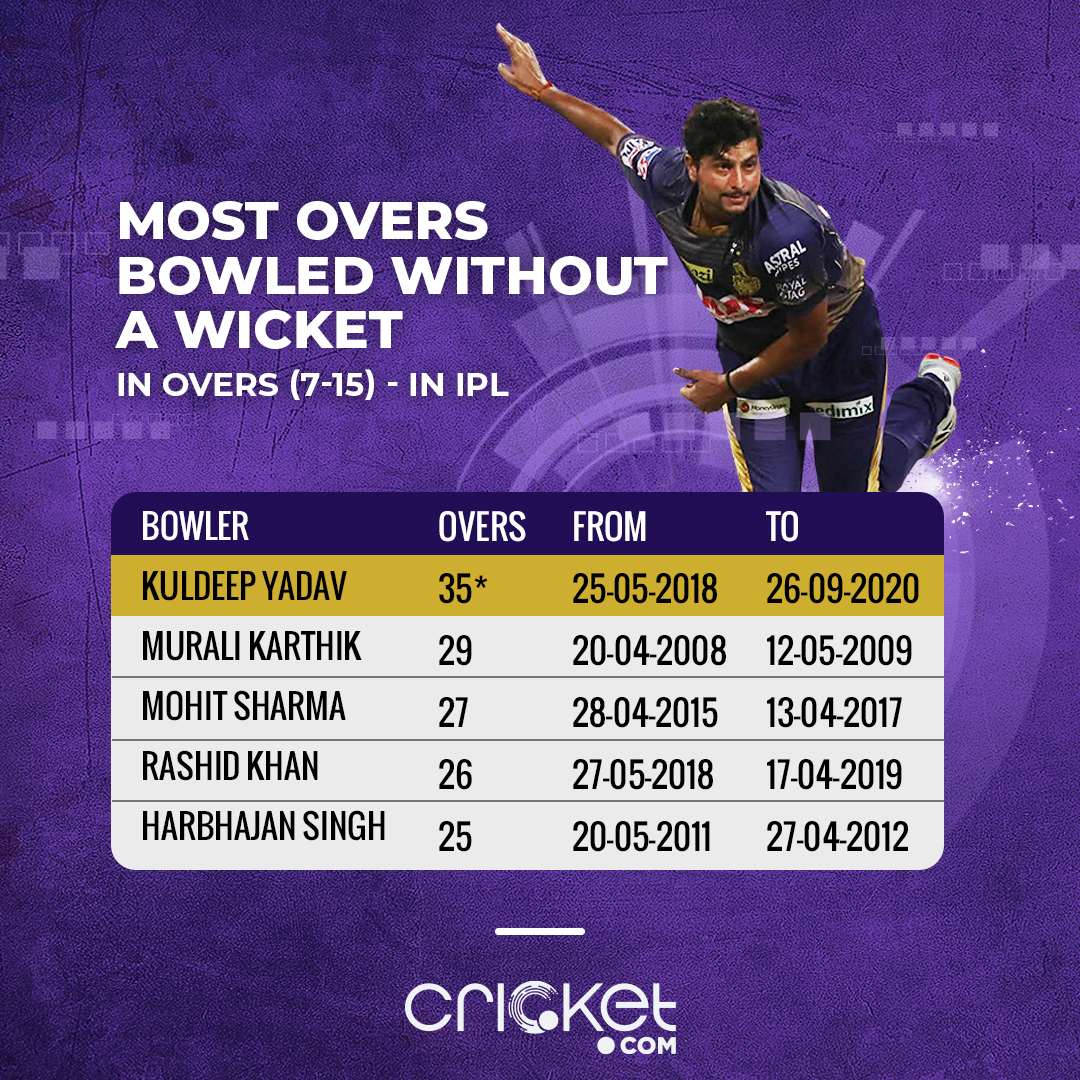 Kuldeep is currently one of the best spinners in white-ball cricket but the left-arm spinner has been in horrendous form in the IPL since the last edition. The 25-year-old has only picked up four wickets in the 11 IPL games he has played since the start of the 2019 edition. Kuldeep hasn't had a great start to this season either as he conceded 39 runs in four overs against Mumbai Indians and then bowled only two overs against Hyderabad, in which he gave away 15 runs.

Kuldeep generally operates in the middle overs (7-15) but the wristspinner hasn't picked a single wicket in this phase since the start of the 2019 season. Meanwhile, Varun Chakravarthy had a pretty good game against the SRH where Karthik used seven bowlers, and if the team management decides to add some depth in the batting line-up in the future, Kuldeep could lose his spot if he doesn't get his act together in the coming games.

Rahul Tewatia: "Tewatia morphed into MSD!", "Rahul Tewatia, you’ve shown all of us that miracles do happen.", "Never write off anyone.", "The greatest TROLL innings in the history... We could keep going!

Against Punjab, the 27-year-old all-rounder from Haryana played one of the most 'roller-coaster' knocks in the history of cricket. Chasing 224, the left-hander was promoted to No. 4 to play the role of a pinch-hitter but could only manage 17 in his first 23 deliveries. Tewatia received a lot of criticism from almost everyone and at one stage, his batting partner Samson even turned down a single to keep himself on strike. Tewatia looked down and out, but then came the miraculous turnaround. The 27-year-old clobbered 36 runs in his next eight balls, including five sixes in Sheldon Cottrell's over, and became an overnight sensation in the space of few deliveries.

The legspinner even had a good outing against Chennai in the first game, where he took 3/37. In the absence of Stokes, he is Rajasthan's premier all-rounder and if he could keep performing like this, Tewatia could prove to be RR's biggest game-changer.

Dinesh Karthik: The KKR skipper is yet to fire this season but it could all turn around against Rajasthan, against whom he averages 37. The wicketkeeper-batsman has scored 518 runs in 19 innings at an average of 37, his best against any IPL opponent (minimum two games). Karthik has batted above Morgan and Russell this season and has a point to prove.