SRH win for the first time while chasing this season 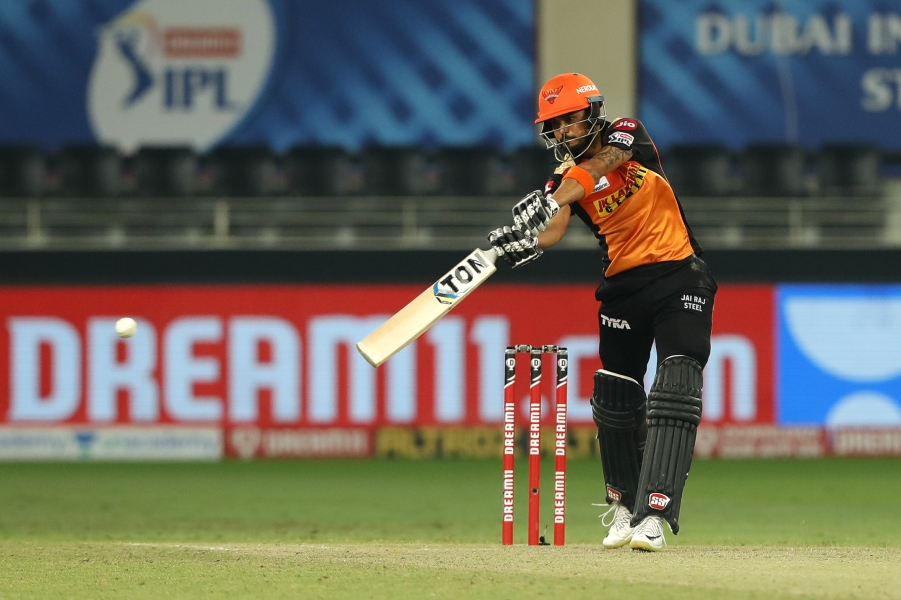 SRH win for the first time while chasing this season

Manish Pandey and Vijay Shankar put their hands up when SRH needed it most to guide their side to an easy win in match 40 of IPL 2020. Here are the significant statistical milestones from the game.

Sunrisers Hyderabad skipper, David Warner opted to field, even though they didn’t have a win while chasing in IPL 2020. However, the SRH bowlers responded well, backing the decision of their skipper. After a brisk start from Robin Uthappa, Jason Holder ended his innings via a run-out. From there on, Sanju Samson and Ben Stokes put on a 49-ball 56 run partnership. Yet again, it was Holder who provided the breakthrough when he dismissed Samson in the 12th over. In the next over, Rashid Khan removed Stokes. Later on, none of the Rajasthan Royals batsmen got going and they ended up at a score of 154/6, which is the lowest first innings score at Dubai International Cricket Stadium this season.

Most sixes in an innings for Manish Pandey

It is certainly a rarity that Manish Pandey has more sixes than fours in an innings. Today was one of those rare days. In his match-winning innings of an unbeaten 83 off 47 balls, there were eight sixes and four boundaries. In his whole IPL career, only thrice has he hit more than five sixes in an innings. One in the final of 2014, when he clubbed half a dozen of sixes against Kings XI Punjab and the other instance was against Mumbai Indians in 2017. Today’s eight sixes are the most Manish has hit in an innings in IPL.

SRH's first win in a chase this season

Prior to the match against RR, SRH had three wins to their name and all those three had come while batting first. Though their strength this season is to defend a total, Warner had different plans at the toss. He opted to chase the target. Chasing the lowest first innings total in Dubai this season, they had an early scare. Warner and Jonny Bairstow were dismissed within the first three overs, thanks to a feisty spell by Jofra Archer. However, Manish and Vijay Shankar stood their ground to fetch SRH their first win while chasing this season.

In a grave situation, against a bowler who had steamed past their teams’ best batsmen, Manish and Shankar had their task cut out. As it was a moderate total, both batsmen had time to settle in. Though SRH had lost Warner and Bairstow at the start, they managed to post 58 runs at the end of the Powerplay without losing wickets further.  Even after the Powerplay, Manish was the aggressor and Shankar the perfect anchor. In the end, Manish and Shankar posted an unbeaten 140-run stand for the third wicket to guide SRH to a victory. Their 140-run stand is the highest third wicket partnership in a chase in IPL for any team. There were few other noteworthy records set by the pair: 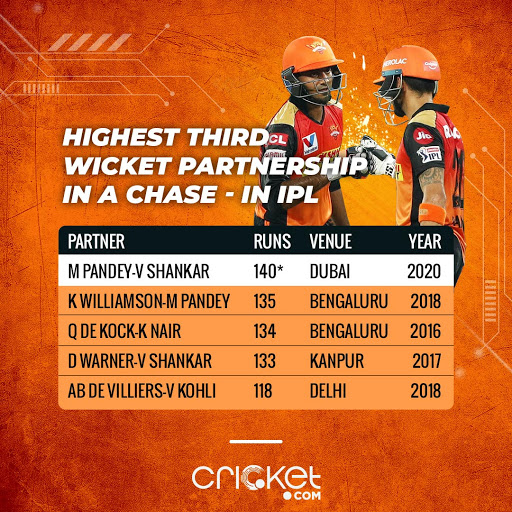