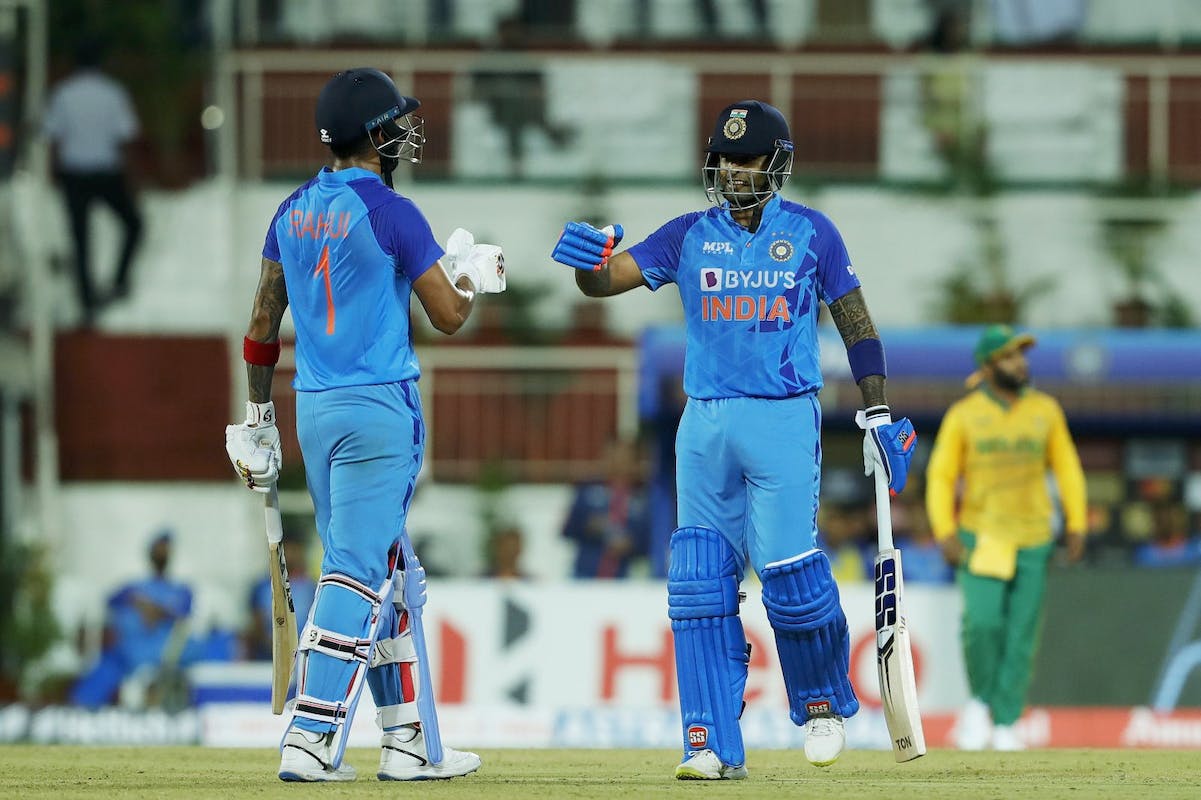 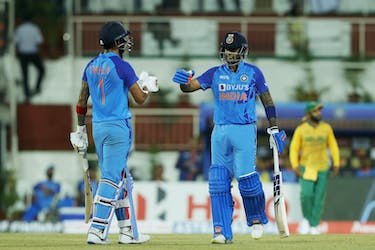 After three years, a T20I game was played at the Greenfield International Stadium. It was a low-scoring encounter, but a fascinating one. Both team batters had to strive for their runs. In the end, India were the better team as they won the first match with eight wickets in hand and 20 balls to spare:

In the first three overs of South Africa’s innings, the game was almost done. With assistance off the pitch, Indian pacers ripped through South Africa’s top-order. 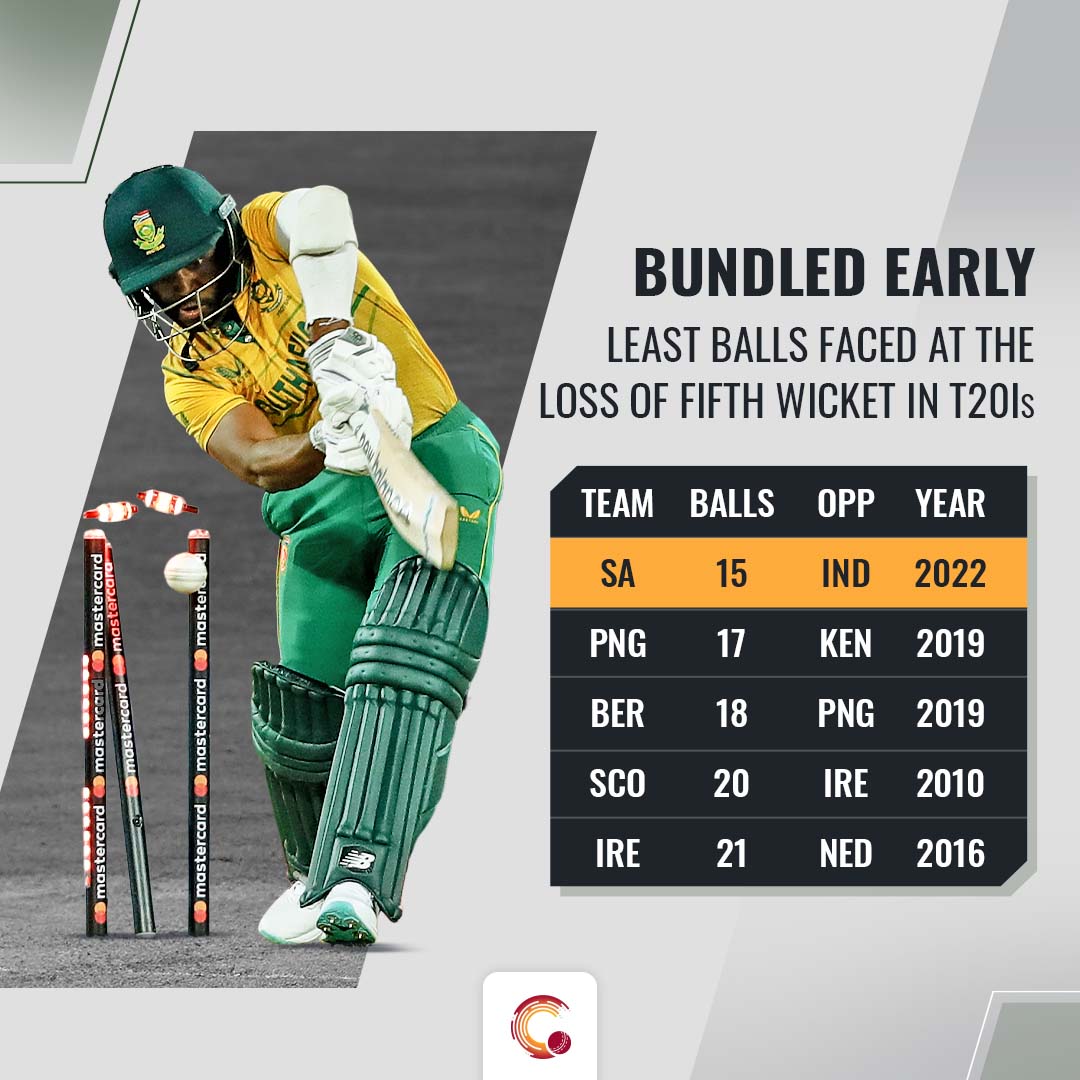 To add more, when South Africa lost their fifth wicket, they had only nine runs on the board. Among Test playing nations, this is the lowest score at the loss of the fifth wicket. Previously, South Africa themselves were five down for 10 runs against West Indies in 2007, the lowest then.

They managed to score 30 runs in the first six overs after losing five wickets. In a complete T20 match, this is their worst powerplay total. Prior to this, against the same opposition in 2007, they had scored 31 runs, losing five wickets, their lowest then.

Including the Proteas skipper Temba Bavuma, three other batters got out for ducks. Interestingly, out of those four ducks, three were golden ducks. In a T20I innings, this is only the second time that South Africa had four ducks. The other instance came in 2018 against Sri Lanka in Colombo (RPS).

Adding further, all the four ducks were between the top six batters. Among full-member nations, this is only the third time that four of the top six batters were out without opening their account. Zimbabwe against West Indies, and New Zealand against Pakistan in 2010, were the other two teams to suffer this fate. Also, this is the second innings in which South Africa had three golden ducks. The first one came against Pakistan in 2013.

At the time of the spinner’s introduction, South Africa were in deep waters. With some help for the spinners as well, Indian spinners went on to pile more pressure by bowling dots over dots. In this innings, both spinners combined, conceding at an economy of 3. In a T20I innings in which, Indian spinners bowled six-plus overs, this has been the most economical innings.

Ravichandran Ashwin, who was preferred ahead of Yuzvendra Chahal, was the main man behind the spinners' economical display. Though he didn’t pick up a wicket, Ashwin conceded only eight runs in his four-over spell.

Among full-member nations bowlers, his economy of 2.0 is the joint-second best for a bowler in a wicket-less four-over spell. Overall, among Indians, this is once again the joint second-best economical spell.

David Miller was also one among the three batsmen to suffer a golden duck. For the first time in his 91 innings T20I career, Miller registered a duck. Prior to this innings, among batters who had batted 40+ innings, Miller was the only batsman without a duck to his name. 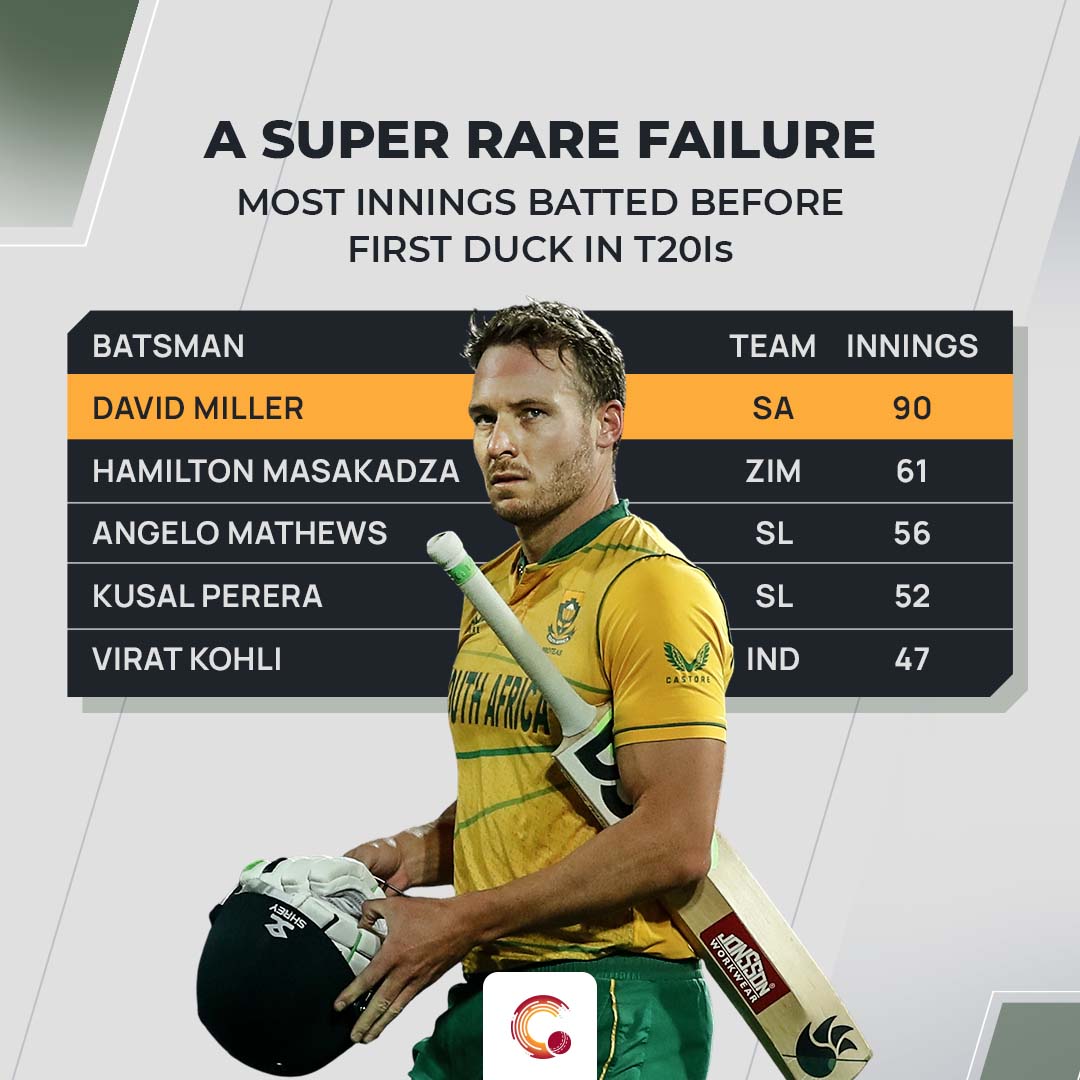 The 90 innings he played before registering his first duck, is the most for a batsman in T20Is. To add more, his 90 innings is also the most consecutive innings a batter has batted without a duck. After suffering a duck in his first T20I innings, MS Dhoni batted 84 innings till his retirement and didn’t have a single duck.

Unlike South Africa, India didn’t lose too many wickets in the powerplay. However, the Protean pacers were too hot to handle. Hence, India could score only 17 runs despite losing only one wicket. In T20Is, this is the lowest first six overs total for India. Against Pakistan in 2016, they had scored 21 runs and lost three wickets, their lowest then. 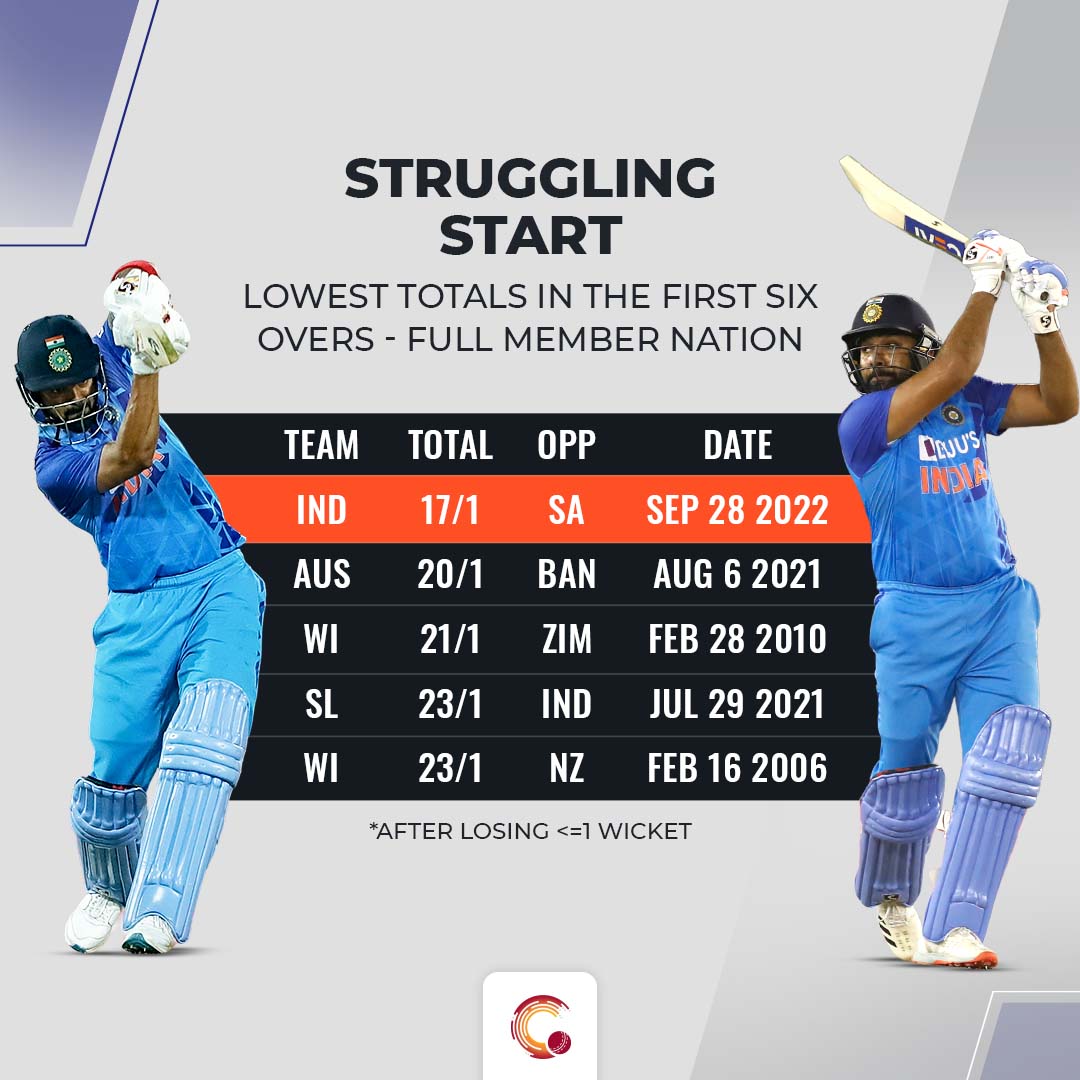 Among full-member nations, India’s total of 17/1 in the first six, is the lowest after losing one or fewer wickets. Australia in 2021 against Bangladesh, had scored 20, the lowest then. 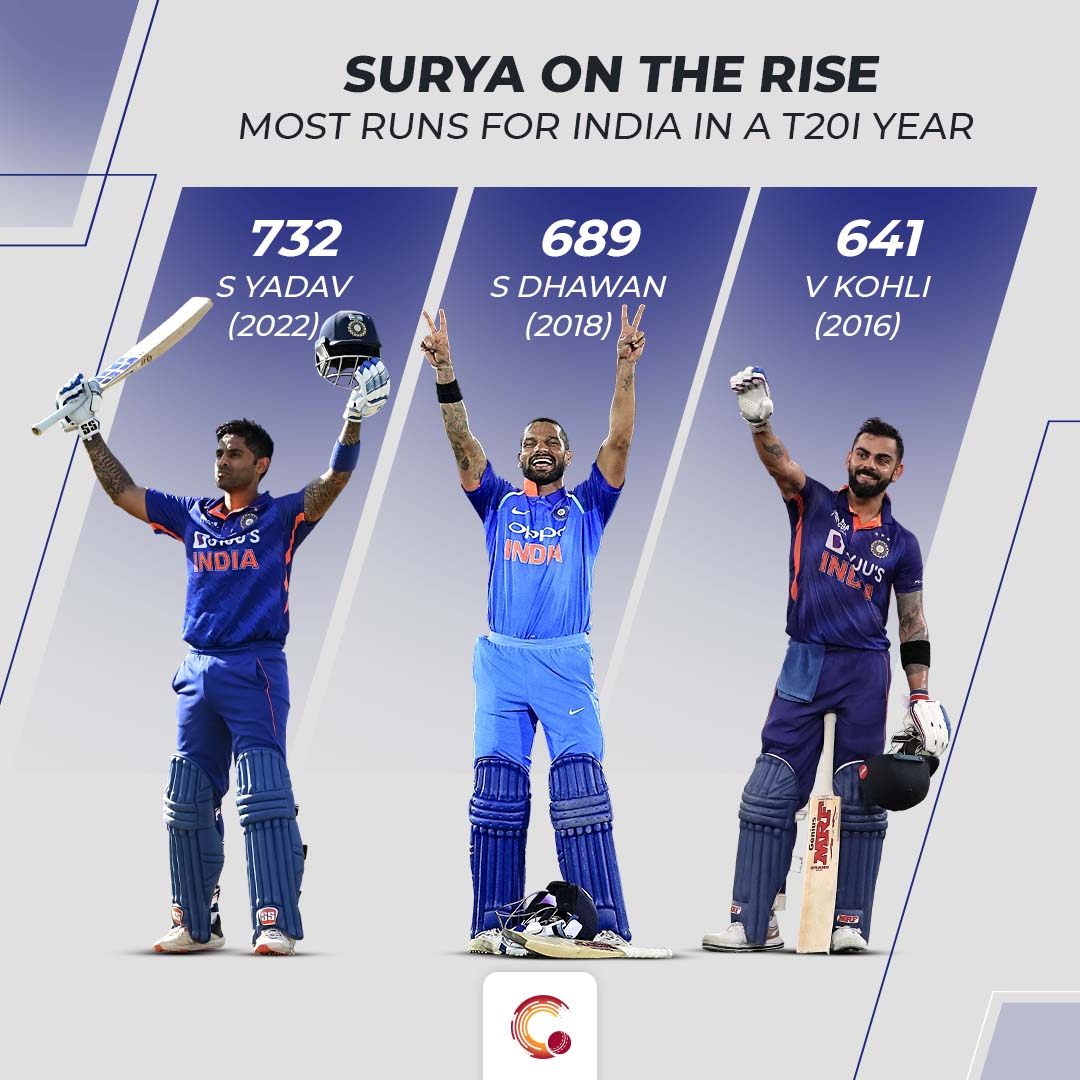 A slow knock by KL Rahul

It was difficult conditions to bat in and which is why openers had to be a bit cautious at the start. But, KL Rahul was a bit over cautious. In his first 30 balls, Rahul scored only 13 runs at a strike rate of 43.3, the lowest first 30-ball strike rate for an Indian in T20Is. 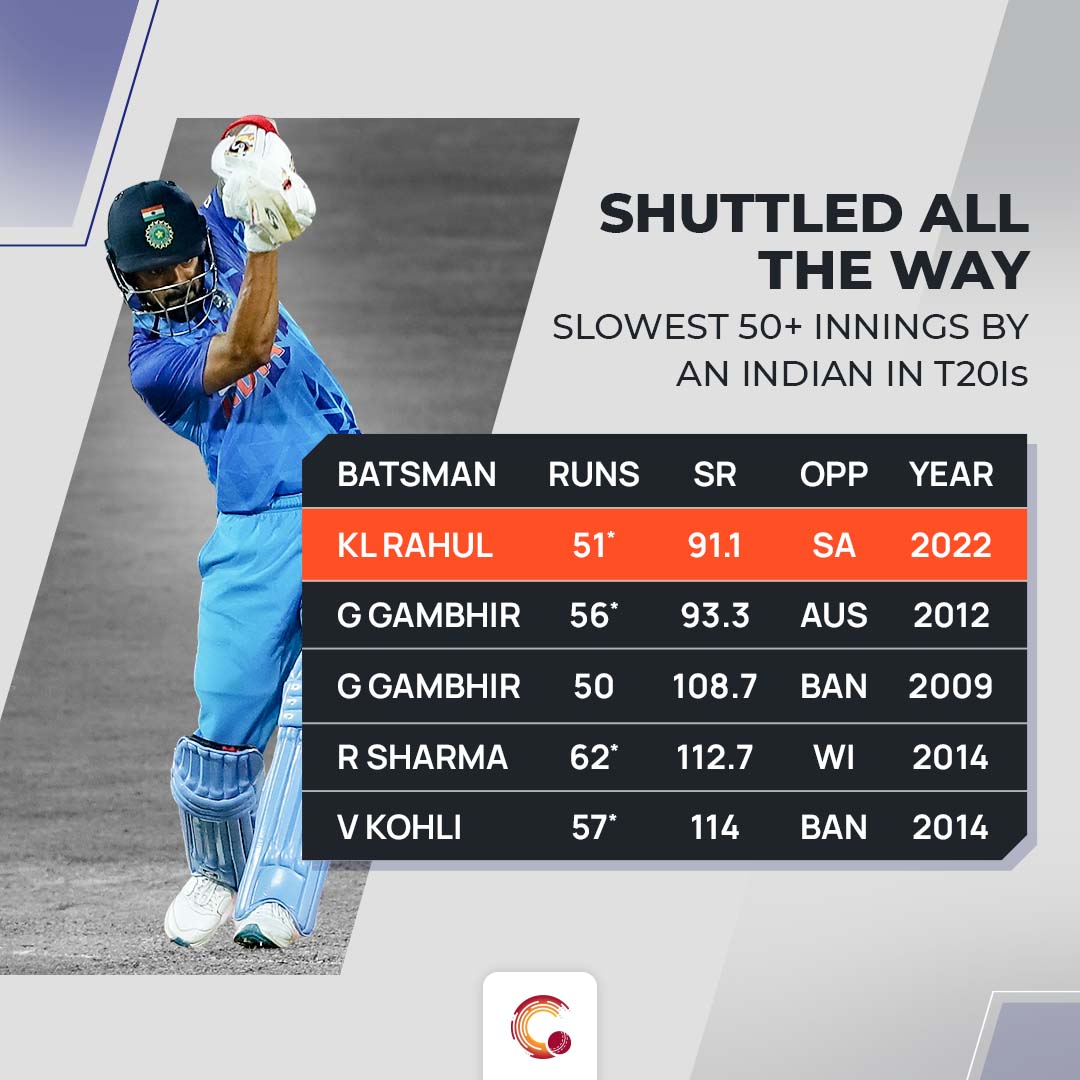 He reached his half-century in 56 balls, which is the slowest for an Indian. Gautam Gambhir in 2012 against Australia, had reached the landmark in 54 balls, the slowest then. These are the only two Indian batters to have reached their half-centuries after facing 50+ balls.