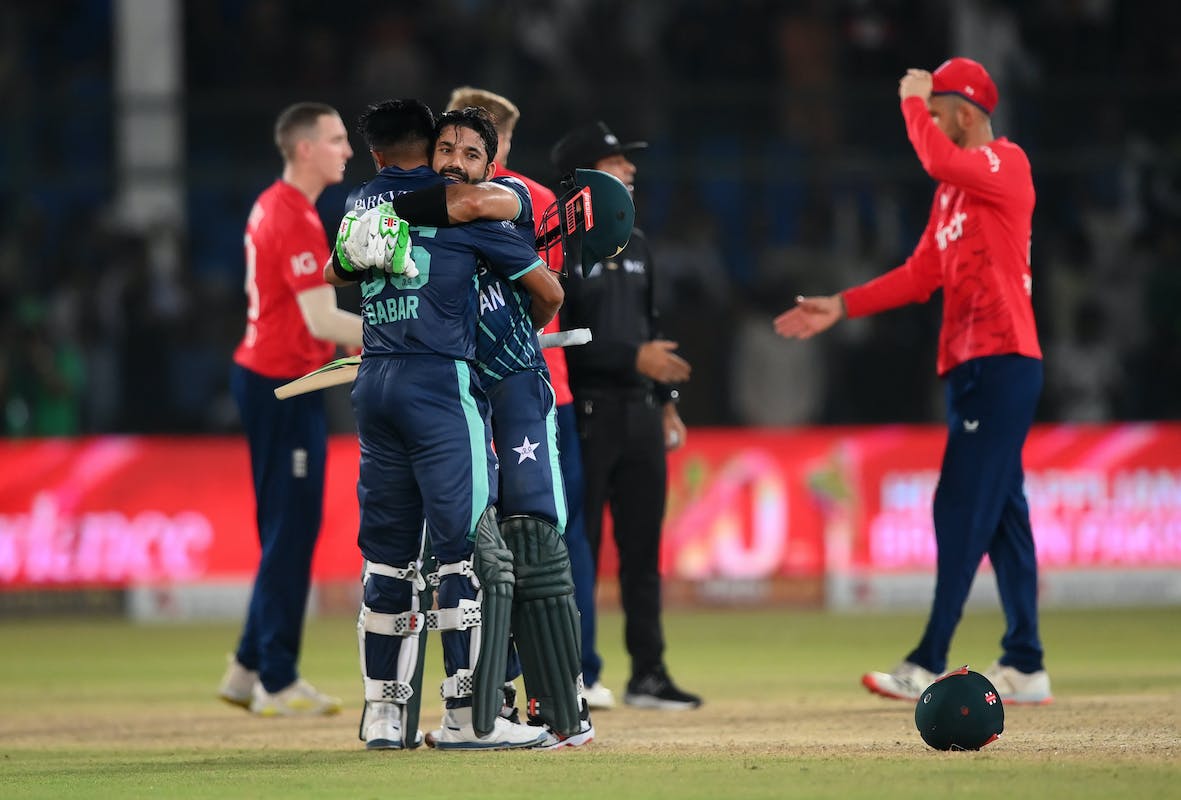 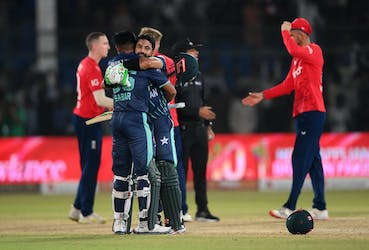 After an average batting effort by Pakistan in the first T20I, they bounced back strongly to level the series thanks to their openers Mohammad Rizwan and Babar Azam, who chased a massive total of 200 without being separated.

The pair registered plenty of records and here is a list of few:

Highest chase with 10 wickets in hand

Before this match, a lot of criticism was registered about Babar and Rizwan’s approach to T20 batting. Though they had been the most consistent opening pair, their strike rates sparked a debate. However, everything was silenced with this win. 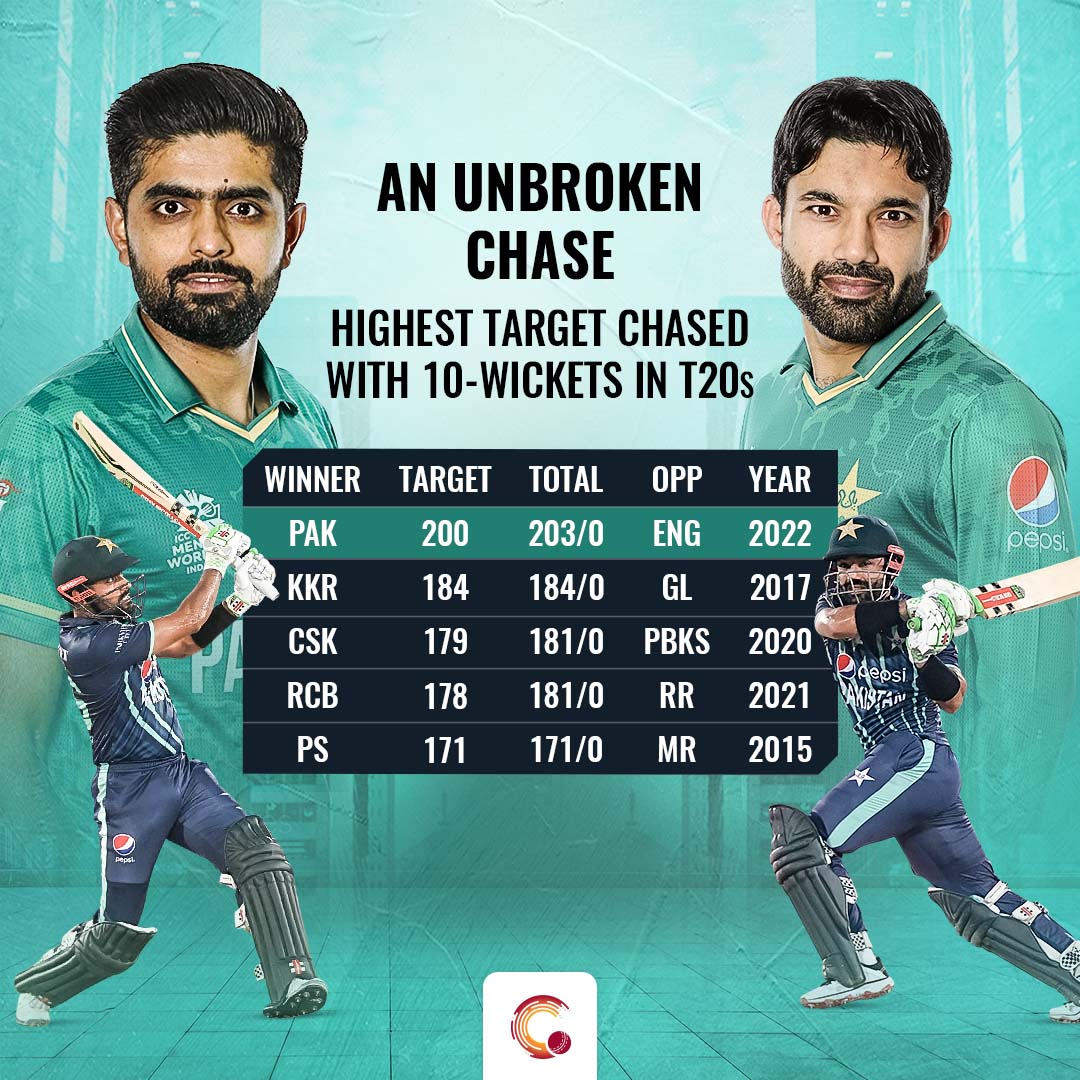 Chasing a mammoth total of 200, Babar and Rizwan took the attack to the bowlers from the word go. Hence, the pair were able to achieve the target of 200 with ease. In all T20s, the target of 200 is the highest target achieved with 10-wickets in hand. Previously, Kolkata Knight Riders in 2017, against the now-defunct Gujarat Lions, chased 184 with all their 10 wickets in hand.

With this win, Pakistan became the first team in T20s to achieve a target of 150+ with 10 wickets twice. Their first one came against India in the 2021 World Cup, when they chased 152.

The soul brothers of Pakistan

Since the time Babar and Rizwan started to open the innings together, they have been immaculate. Providing excellent starts to their team has been the hallmark of it. By virtue of a massive partnership, the two registered plenty of records:

- When they registered 18 runs, the duo became the most successful pair in T20Is. They went past Shikhar Dhawan and Rohit Sharma’s tally of 1743 runs. Babar and Rizwan now have 1929 runs together. 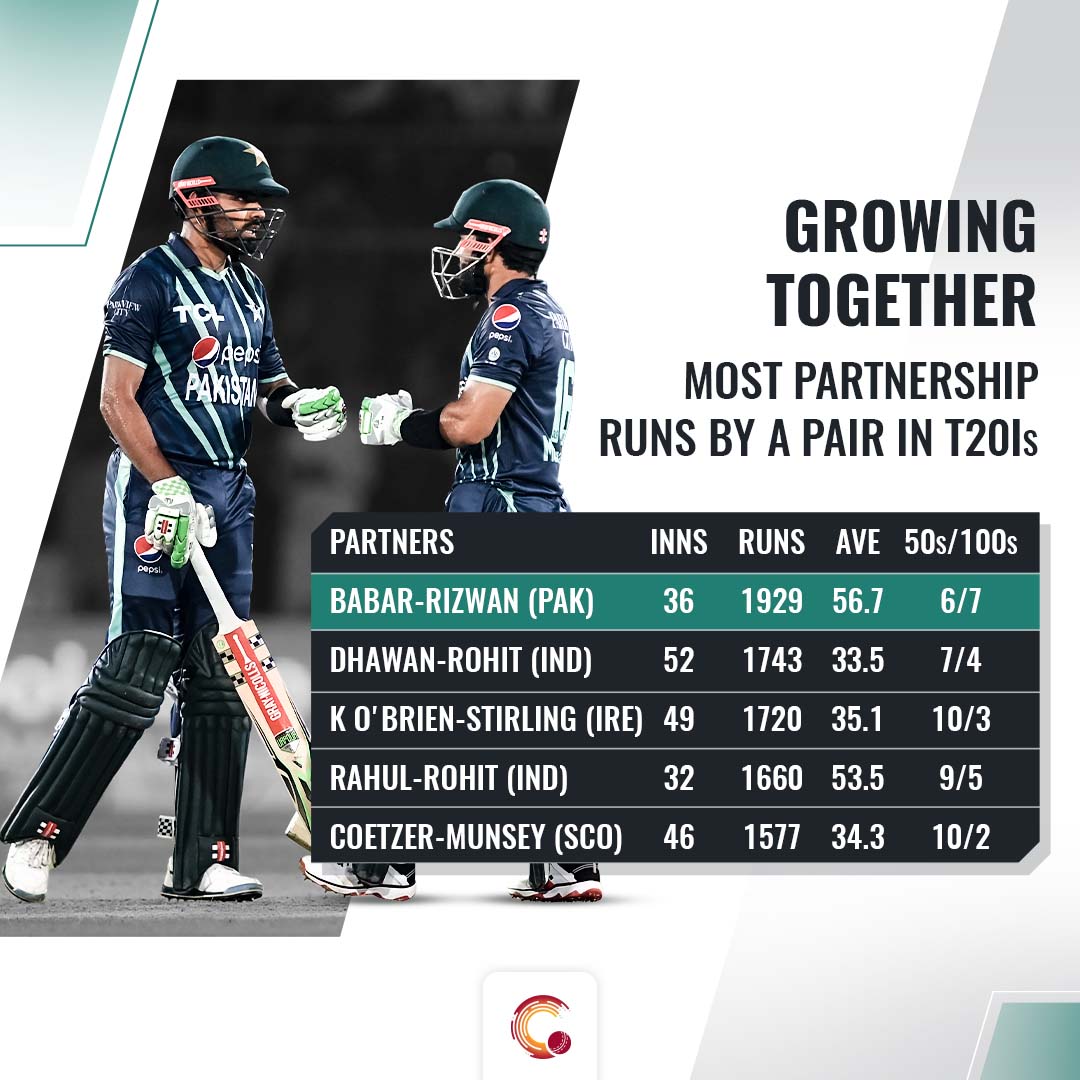 - After registering their 13th partnership of over 50 runs, the duo of Babar and Rizwan are one behind KL Rahul and Rohit Sharma in terms of most 50+ partnerships (14) in T20Is.

-In T20Is, their 100-run partnership was the seventh, which is also the most. The closest to them is again the pair of Rahul and Rohit (5).

-In all T20s, Babar and Rizwan with five, went past AB de Villiers and Virat Kohli’s tally of four 150+ partnerships. 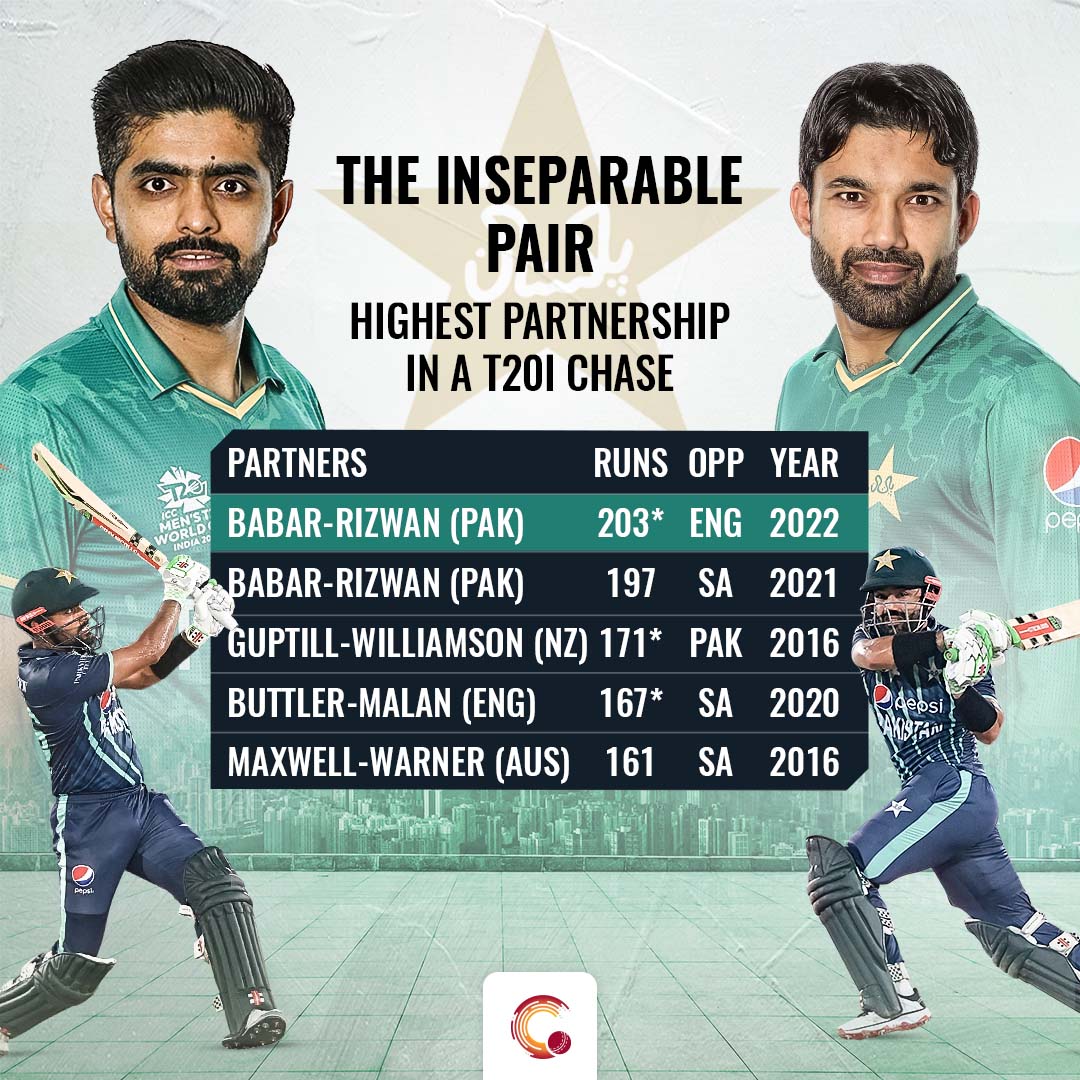 The Karachi King is back

The year 2022 hasn’t been great for the Pakistan skipper Babar. A poor series against Bangladesh, an average one against West Indies and another poor outing in Asia Cup. But, this match saw the Babar we all know.

In his first 30 balls, Babar was struggling for timing. Not after once he had set his eyes in. In his knock of an unbeaten 110, Babar registered few records:

-After registering his second T20I century, he became the first Pakistan batter to achieve this feat.

-Both his hundreds have come as the captain of Pakistan. In T20Is, Rohit and Faheem Nazir of Switzerland are the other two captains to have two centuries. 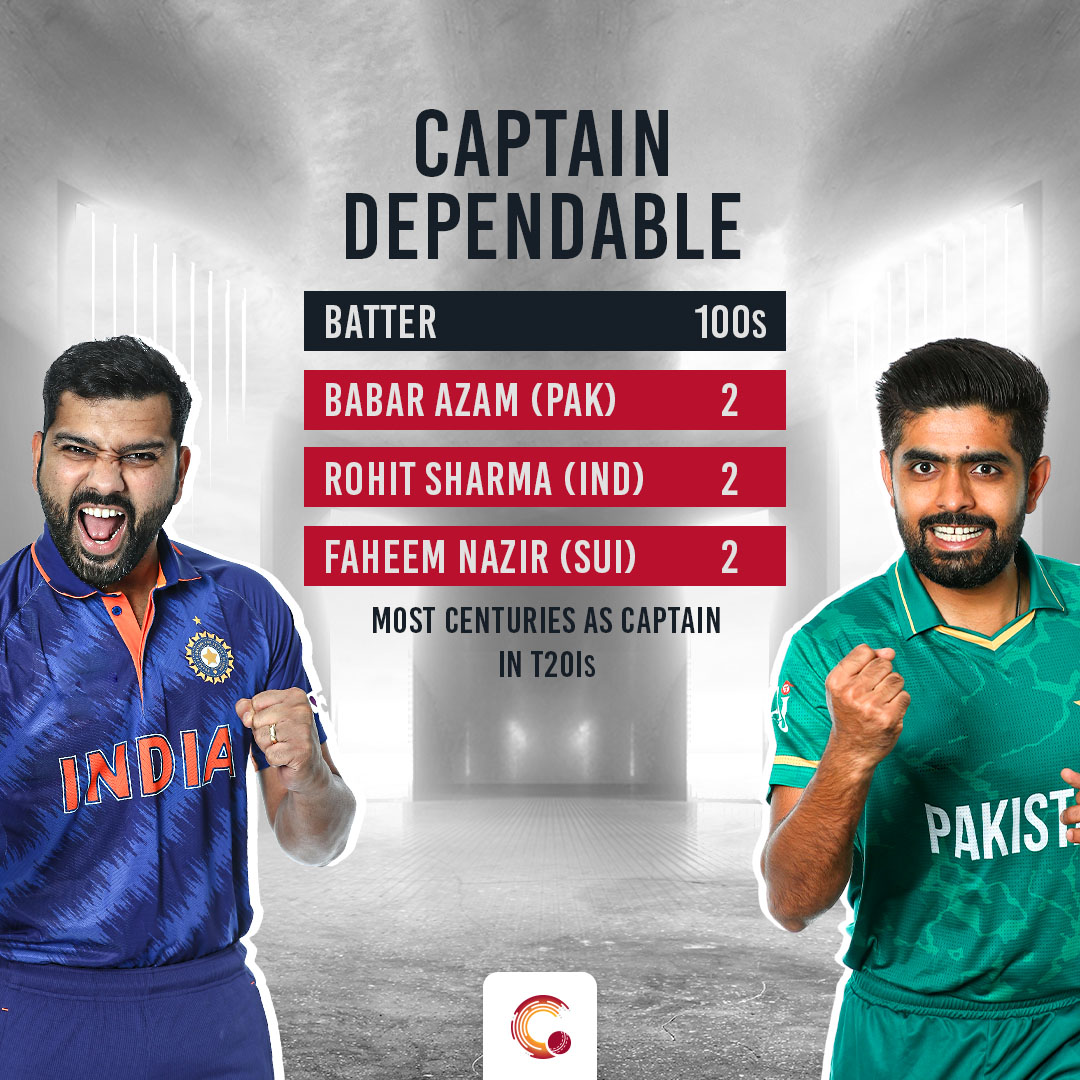 -Both his centuries have come when Pakistan were chasing 200+ targets. In both the matches, he had a partnership of 190+ with Rizwan. Also, he is the only batsman to have two centuries in a successful 200+ chase.

-Babar joins an elite list of players to hit two centuries in a chase. Glenn Maxwell (AUS), Rahul (IND) & Muhammad Waseem (UAE) are the other three to achieve this feat.

All the five wickets that fell in the first innings, were through bowled. In the history of T20Is, this was the first instance of all the top five batters dismissed via ‘bowled’. 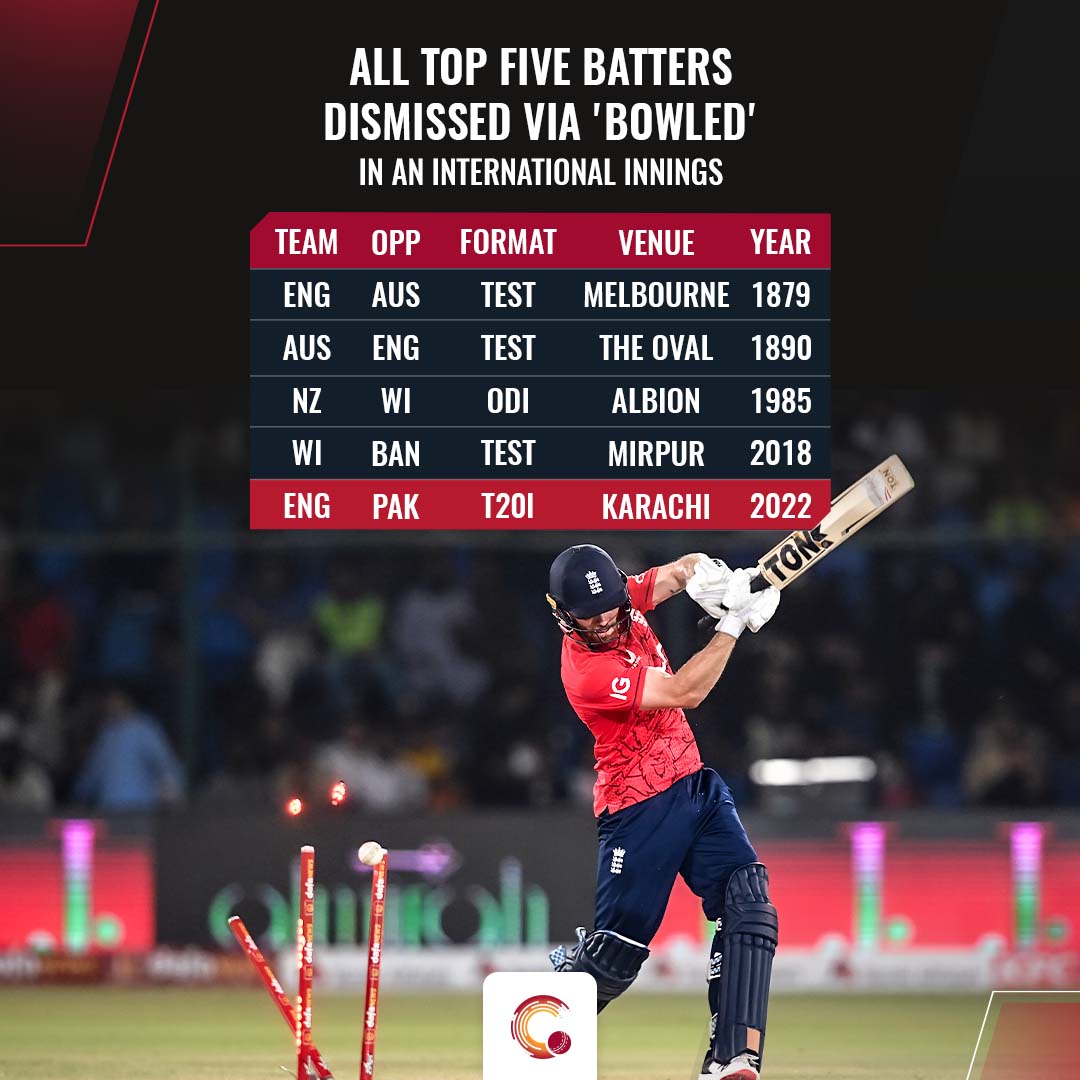 Overall in international cricket, this was only the fifth instance. Three times in Tests, once in ODIs and once in T20Is. The first to witness this feat was in a Test between Australia and England in Melbourne in 1879. In the first innings of the Test match, England’s top seven batters were all dismissed through ‘bowled’. Prior to this match, the most recent one was in a match between Bangladesh and West Indies in 2018 in Mirpur. West Indies’ top five batters suffered this fate.

-Dawid Malan registered a first ball duck batting at number three. The last time an England number three suffered this fate was Moeen Ali in 2014 against Sri Lanka, eight years ago. While batting first, it dates back to 2007, when Luke Wright was dismissed for a golden duck against Zimbabwe.

-Moeen Ali in this match registered a 23-ball half-century, which is the fastest by an England batter in Asian conditions. Previously, Sam Billings against the same opponent in 2015, had reached the landmark in 24 balls in Dubai.

-Rizwan reached his half-century in 30 balls. Only once has he reached the landmark in lesser balls. Against West Indies in Karachi in 2021, he hit a 26-ball half-century.

-This was England’s first ever 10-wicket loss in T20Is.