Stats: ENG enter the finals with a 10-wicket win and break the Adelaide Jinx 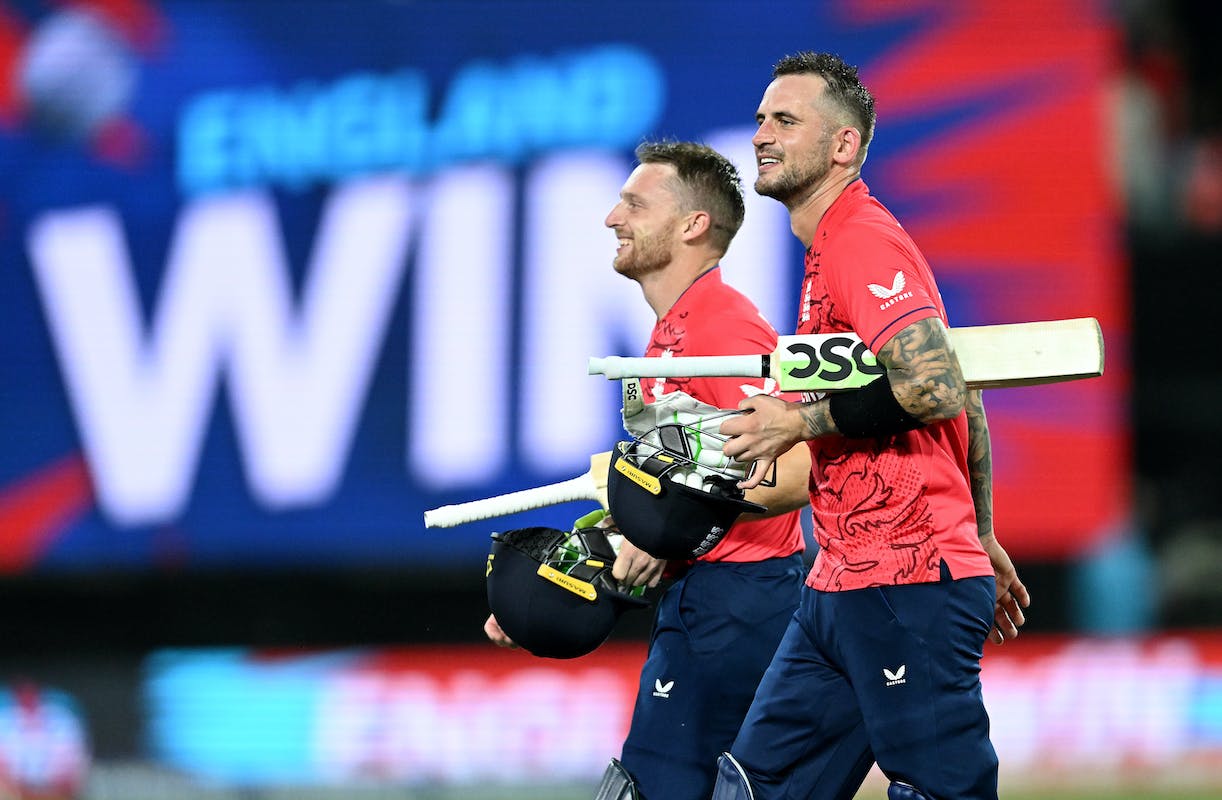 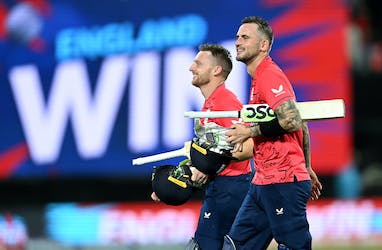 Stats: ENG enter the finals with a 10-wicket win and break the Adelaide Jinx

Here are a few noteworthy stats from the second Semi-final of T20 WC 2022, between India and England in Adelaide

Contrary to the expectations of a tight contest, India were mauled by England in the second semi-final of the 2022 T20 World Cup. Batting first, India’s constant trouble with the openers was the beginning of their painful exit. Though the late flourish by Hardik Pandya, India could post only 168 runs on board.

In reply, England never gave a chance for India to comeback in this game. Let alone coming back, they did not even have a chance to make a game out of this. Alex Hales and Jos Buttler carried England to their third T20 World Cup final.

In the all-time list of knock-out matches in a major ICC tournament, this match will go down as one of the most one-sided affairs. Indian bowlers could not pick up a single wicket in this match. Not the first time they have suffered this kind of defeat. In the 2021 edition, they suffered a similar fate against Pakistan. In their 10-wicket win, England logged a few noteworthy records:

In T20Is, this is the third 10-wicket win for England. Their first one came against West Indies in 2011 at the Oval, and the second was against New Zealand in 2013 in Wellington.

England chased a target of 169 without losing a wicket in this match. In T20Is, this is the joint second-highest target chased by a team with all wickets in hand. 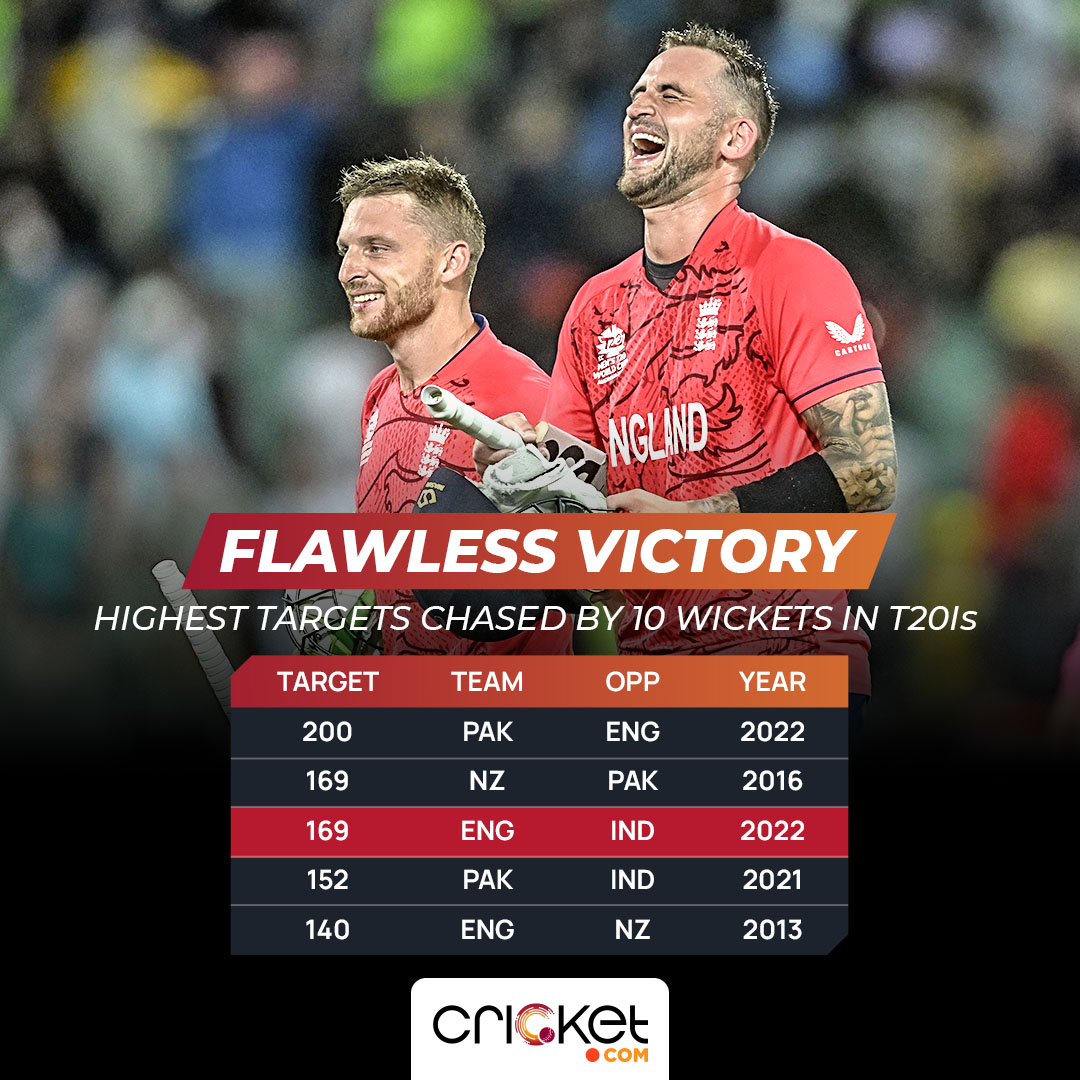 In T20 WC, this is only the fifth instance for a team to chase down a target with 10 wickets in hand.

While chasing a target of 150+, India became the first team to suffer a 10-wicket margin defeat twice in T20Is.

The last two 10-wicket margin defeats in T20 WC have come against India. Pakistan in 2021 and England in this match.

By virtue of an unbeaten 170-run partnership for the first wicket, Hales and Buttler broke a few World Cup and T20I records: 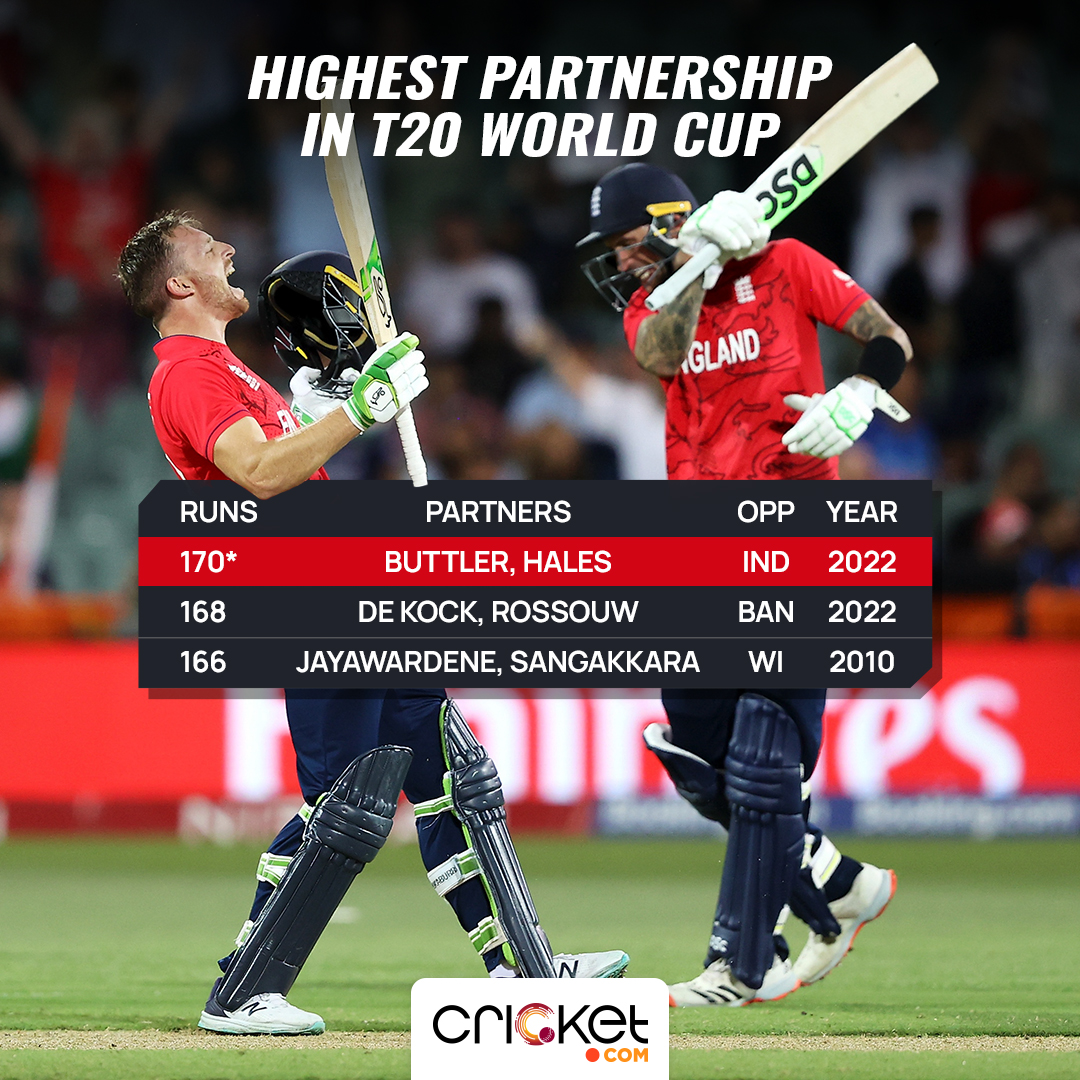 In T20 World Cups, their 170-run partnership is the best for any wicket. Before this match, Quinton de Kock and Rilee Rossouw against Bangladesh had forged 168.

In T20Is, only Dawid Malan and Eoin Morgan’s partnership of 182 against New Zealand in 2019 is above Buttler and Hales' stand.

Against India, this is only the third 150+ partnership and Buttler and Hales’ 170 is the second best. South African duo Quinton De Kock and David Miller in Guwahati this year had posted an unbeaten 174 for the fourth wicket, the highest.

In a T20 World Cups, this is the first innings in which two batters scored 80+ in the same innings. Buttler was unbeaten on 80 off 49 and Hales scored 86 off 47.

Both openers combined, hit 13 fours and 10 sixes in England’s innings. In a T20 World Cups, only the opening pair of Chris Gayle and Devon Smith against South Africa in 2007, had hit 10+ fours and 10+ sixes.

In a T20 World Cup semi-final, Buttler and Hales are the second opening pair after Babar Azam and Muhammad Rizwan in the first semi-final, to have 50+ scores in the same innings.

The greatest cricketer of the modern day achieved another landmark. There were few other records as well in his innings of 50 of 40 balls: 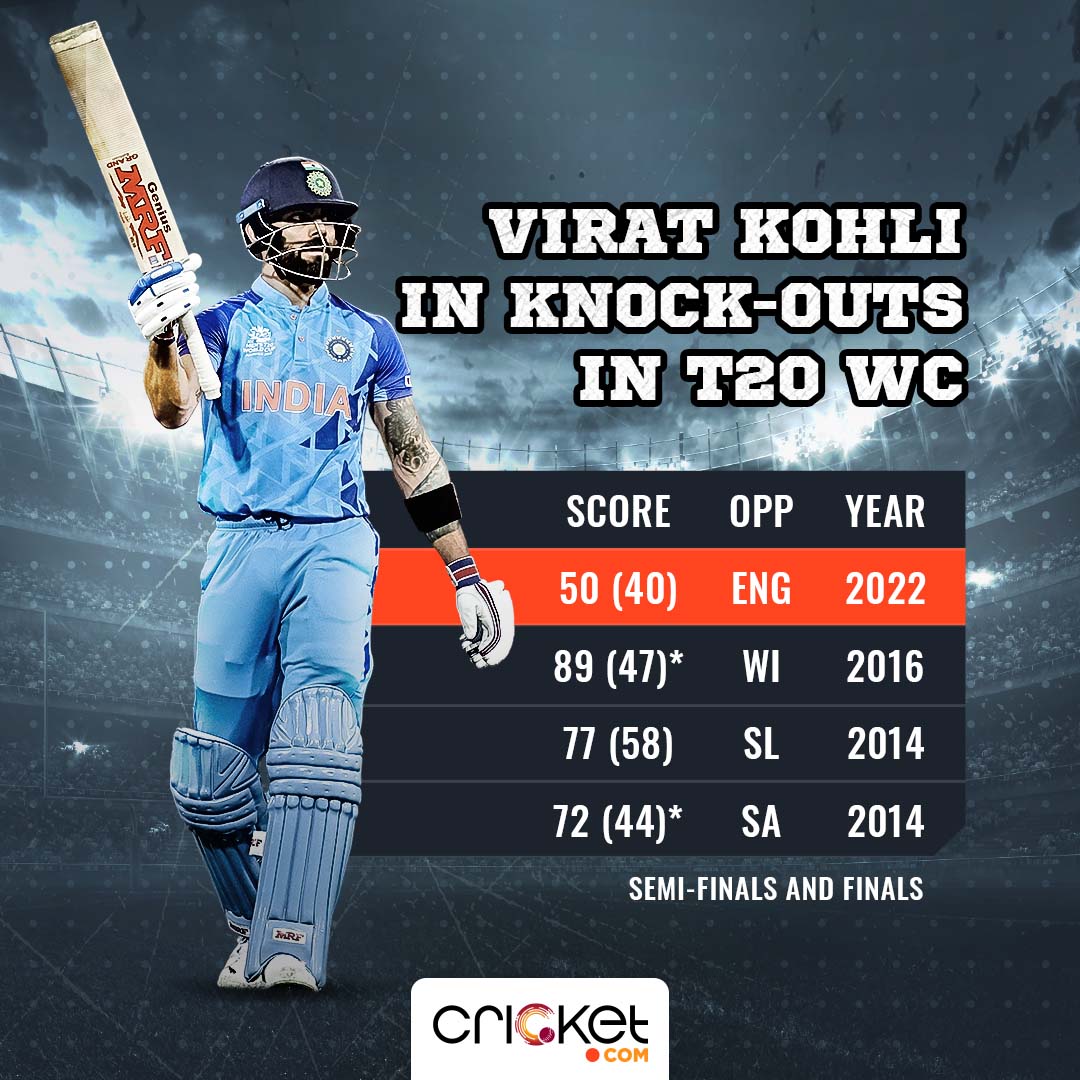