Stats: Hong Kong bowled out for the lowest T20I total against a Test playing nation 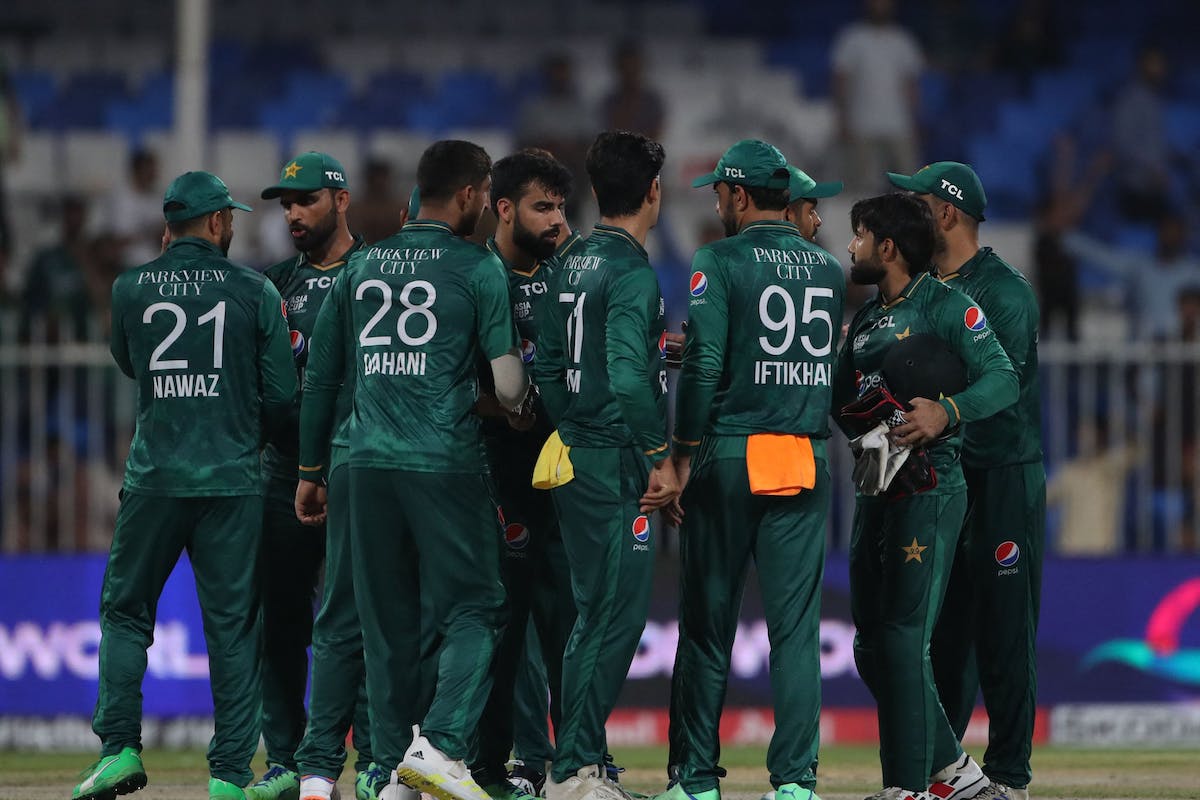 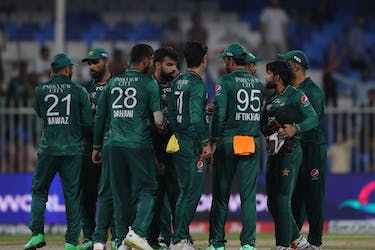 Stats: Hong Kong bowled out for the lowest T20I total against a Test playing nation

Here are a few noteworthy stats from Match six of Asia Cup 2022, between Pakistan and Hong Kong in Sharjah

It was a knock out match between the two teams and Hong Kong were knocked out cold. We all anticipated an easy win for Pakistan but not by such a margin. Pakistan posted a mammoth total of 193 in their 20 overs. In reply, Hong Kong batters who had put on a decent effort against India, were bundled out for 38.

Pakistan advance into the super fours with authority

It was always difficult for Hong Kong to chase the target. But, what followed after the powerplay was unexpected. The wizardry of Shadab Khan and Mohammad Nawaz was too much to handle. 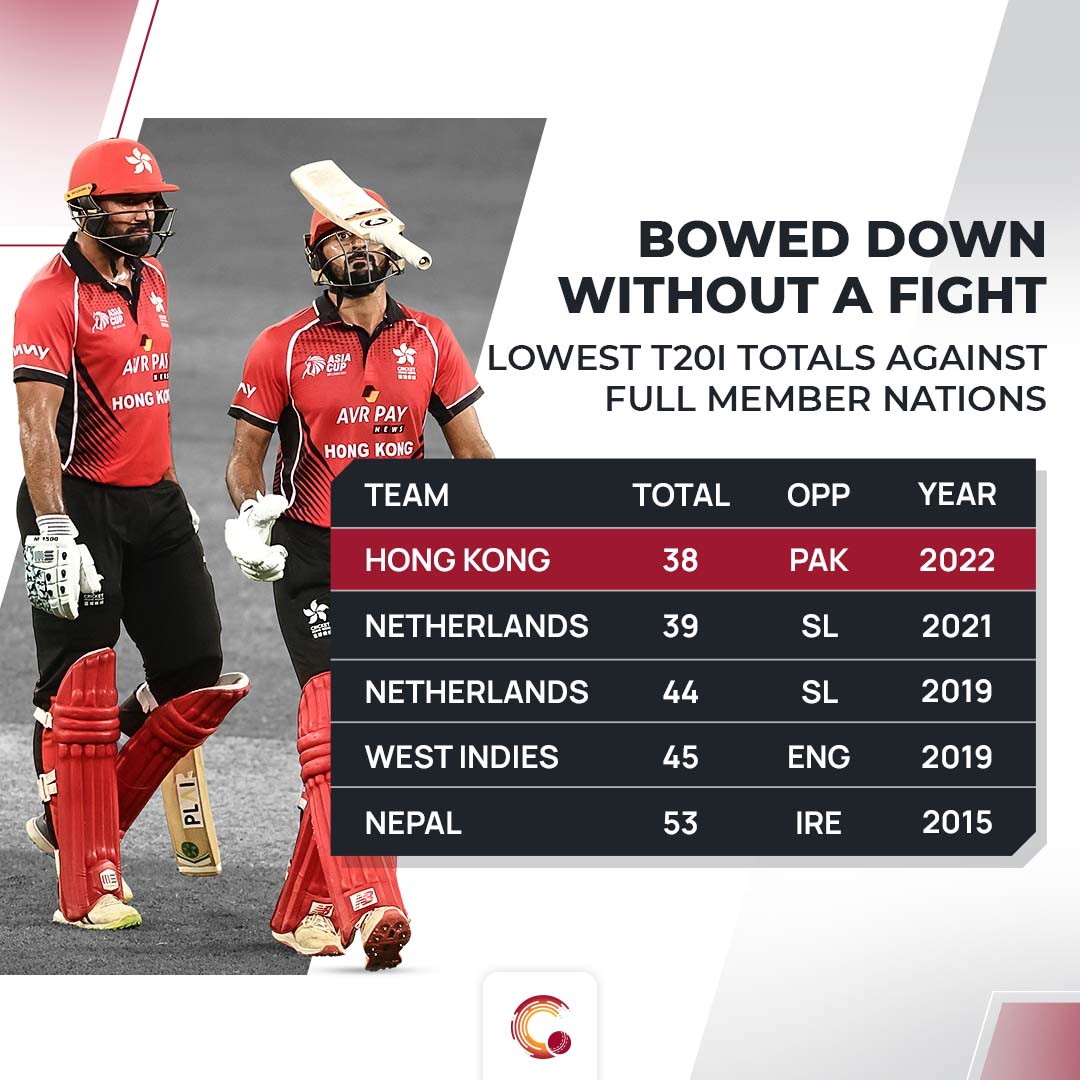 In a span of just 4.4 overs after the powerplay, Hong Kong lost seven wickets for just 13 runs to both the spinners. By virtue of their collapse, Hong Kong posted only 38 runs on the board and registered the lowest total against a full member nation in T20Is.

Pakistan registered a 155-run win, which is their largest win by runs in the format. Overall, among full member nations, only Sri Lanka against Kenya in 2007 had a bigger win. 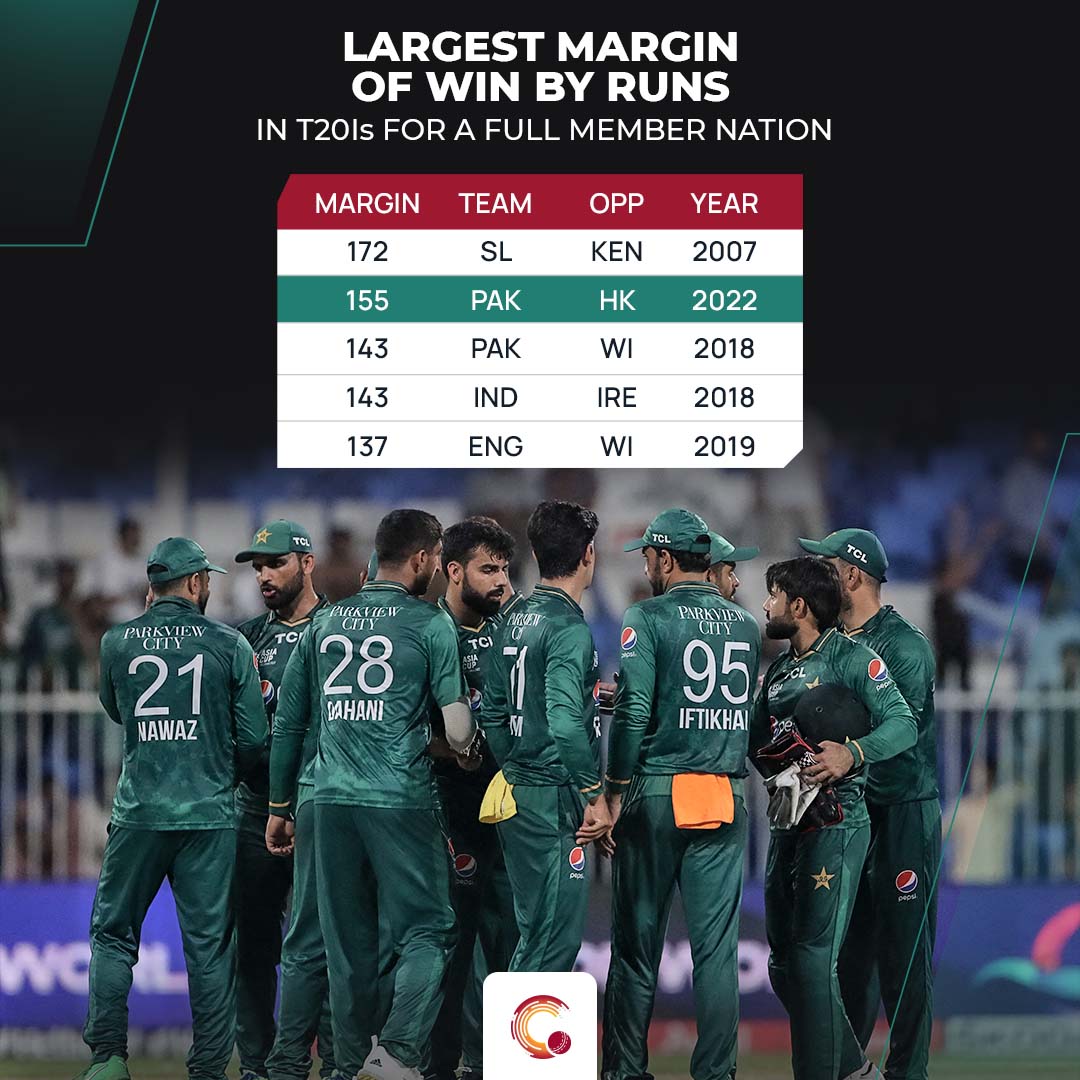 Hong Kong were bundled out in just 10.4 overs. For Pakistan, this is the least number of overs taken to dismiss a team in international cricket. Previously, against South Africa (T20I) in 2013 in Centurion, they had inflicted an all-out in 12.2 overs.

The introduction of Shadab and Nawaz after the powerplay caused devastation for Hong Kong. Both spinners picked up a wicket in their first over. Against Shadab in particular, the Hong Kong batters were unable to pick the googly. In the end, Shadab picked up four wickets for eight runs and Nawaz bagged three for five. 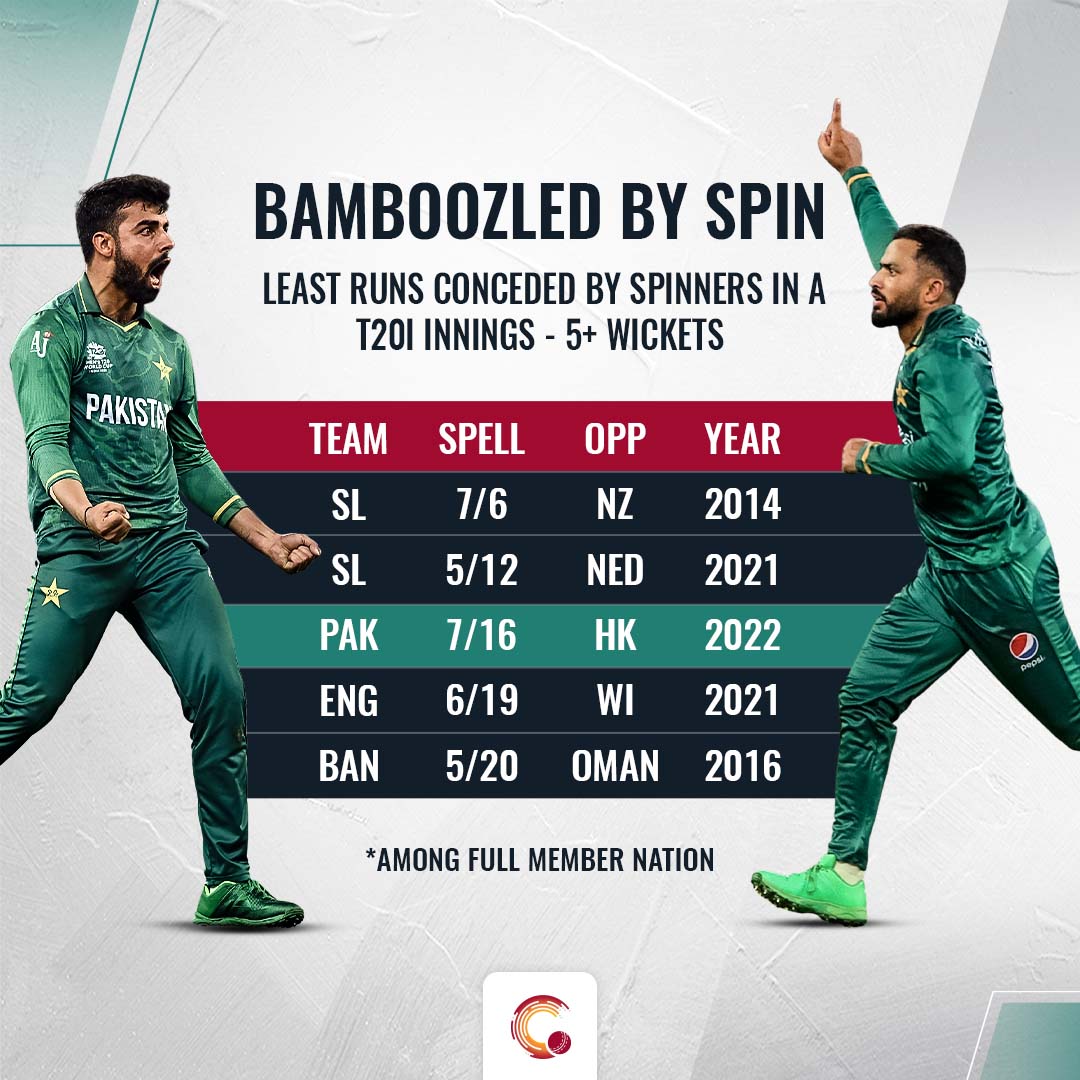 The spinners picked up seven wickets for just 16 runs, including the three-run over from Iftikar Ahmed. In T20Is among the full member nations, only Sri Lanka spinners, twice, had picked up five or more wickets for lesser runs in an innings.

Pakistan scored 129 runs in the last 10 overs, which is why they were able to post 193 after being 64/1 in the first half. The credit majorly goes to the partnership of Mohammad Rizwan and Khushdil. 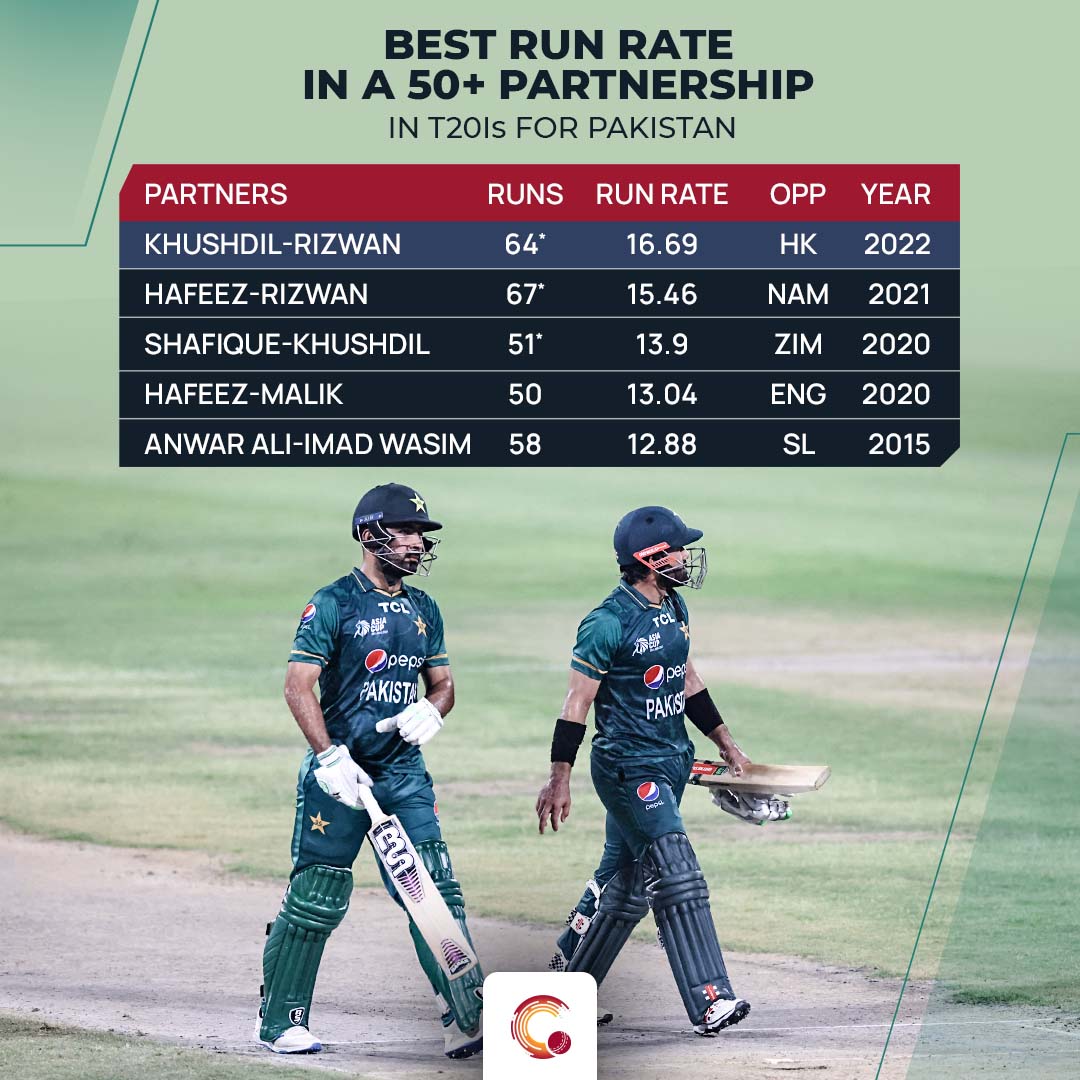 The pair forged an unbeaten partnership of 64 for the third wicket in just 23 balls, a run rate of 16.69. Their partnership run rate is the best for Pakistan in a 50+ runs stand in T20Is. 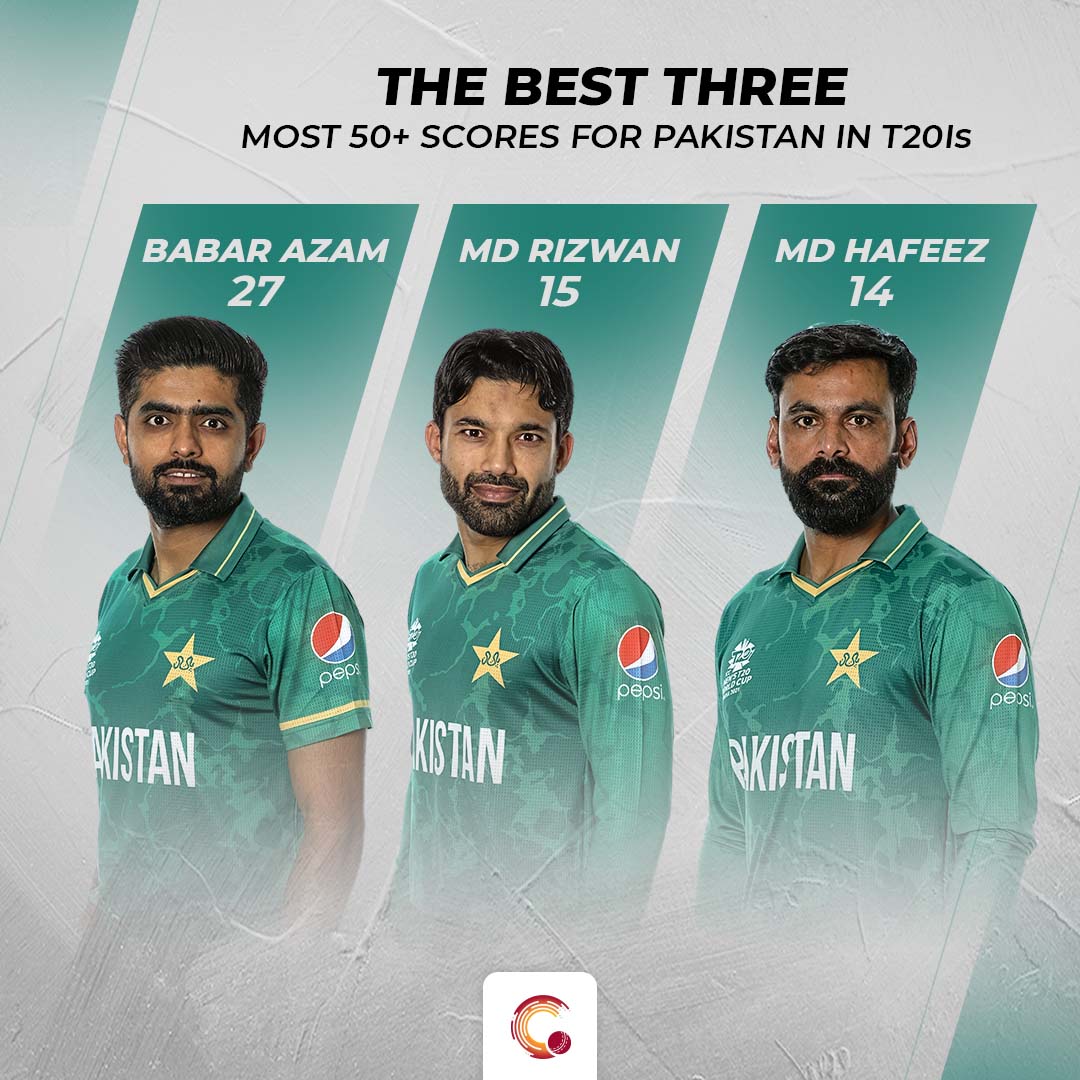 He was slow to start, but picked up the pace gradually and went on to score an unbeaten half-century (78). In T20Is, this was his 15th score of over 50, he has 14 half-centuries and one century to his name. Among Pakistan batters, he now has the second most 50+ scores in T20Is, going past Mohammad Hafeez.

With 164 runs on board at the end of the penultimate over, Pakistan couldn’t have wished for a better last over than this. 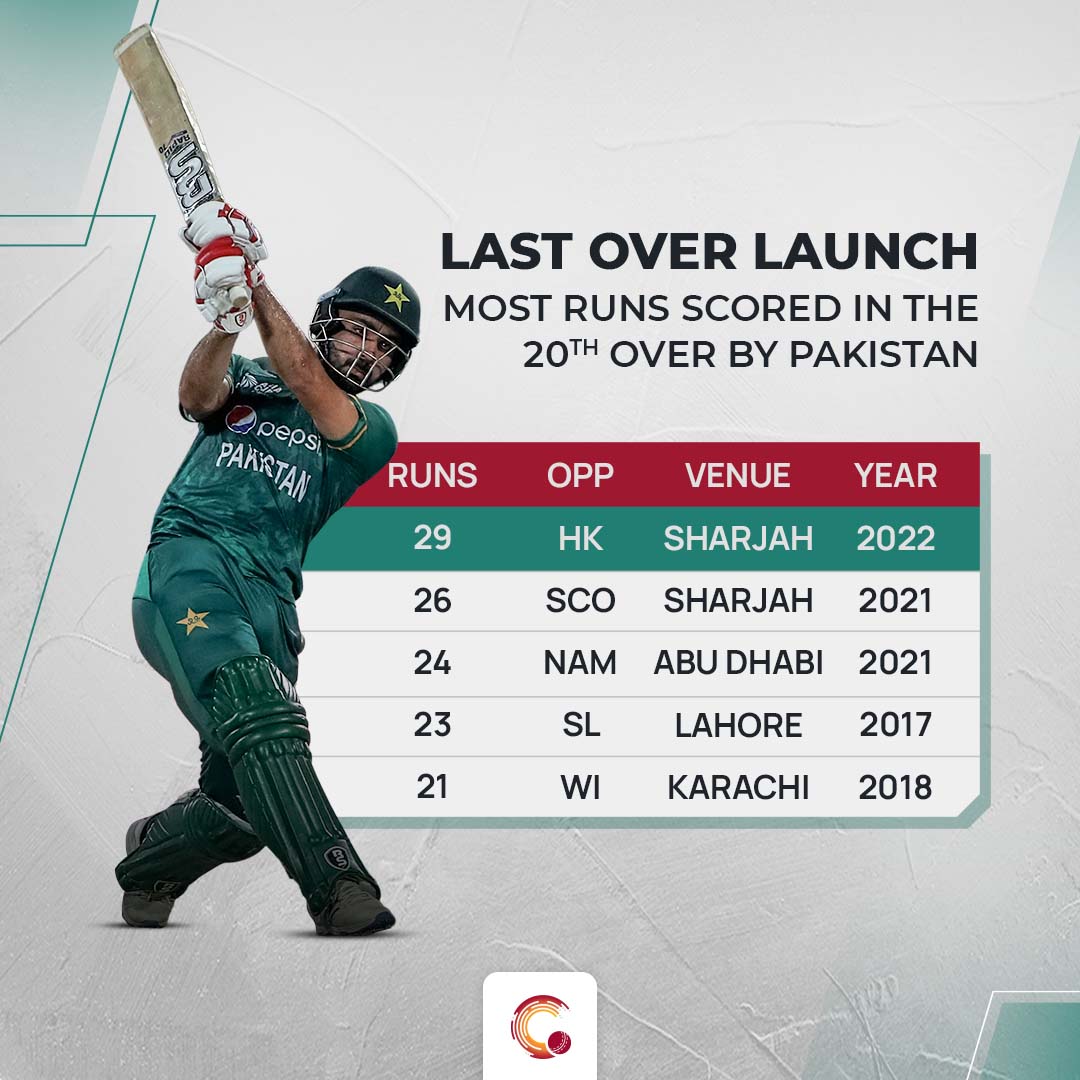 Khushdil, on strike, wasted the first two balls. But, he came back strongly by hitting four sixes of the remaining four legitimate deliveries. Hong Kong bowler Aizaz Khan, helped them with a wide four down the legside. Pakistan accumulated 29 runs in the last over, which is the most runs of the last over for them in T20Is.

To add more, the four sixes hit are also the most for Pakistan in the 20th over. Individually, Khushdil became the first Pakistan batter to hit four consecutive sixes of legitimate deliveries.

Extras being the only double-digit scorer

In a total of 38, none of the Hong Kong batters reached double figure scores. In T20Is, this is only the seventh instance where all 11 batters have scored single digits.

Astonishingly, the extras were the highest scorer as Pakistan bowled 10 extras (2 leg byes and 8 wides). In T20Is, this is the first ever innings in which all 11 batters scored in single digits and the extras were in double digit.