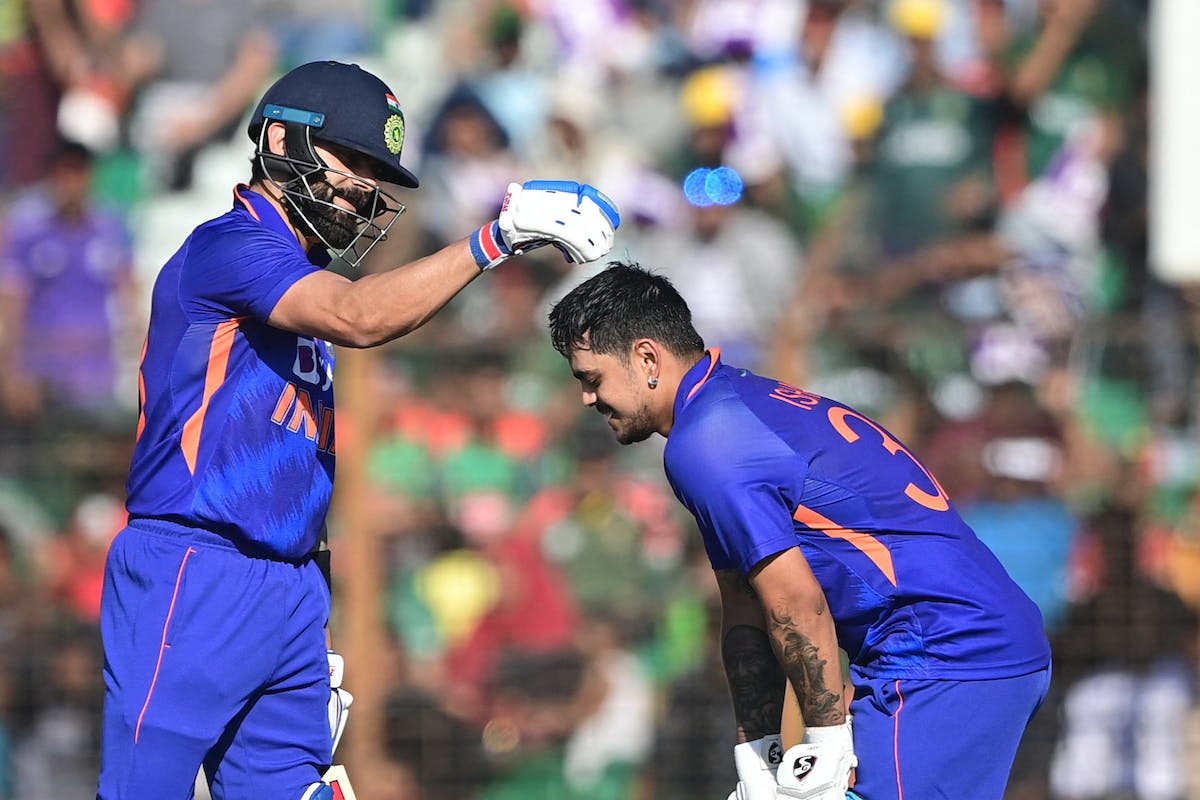 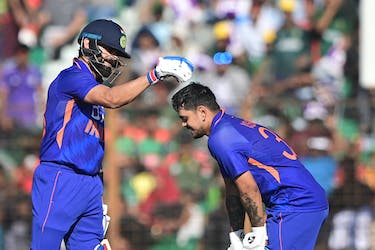 It was a dead rubber, but not for the likes of Ishan Kishan. With Rohit Sharma injured and out of the series, Kishan had to capitalize the opportunity and he obliged with a double century. Virat Kohli's century drought came to an end as the batter reached his 44th ODI ton.

Both batters had a mammoth partnership of 290 for the second wicket and helped India post a gigantic total of 409. By virtue of a 227-run win, they managed to avoid a white-wash and attained a consolation win. There were plenty of records and Kishan was the highlight of those records:

By scoring 210 in the third ODI against Bangladesh, Kishan made a statement that he is definitely a contender for the opening slot. Here are some records he registered in this innings: 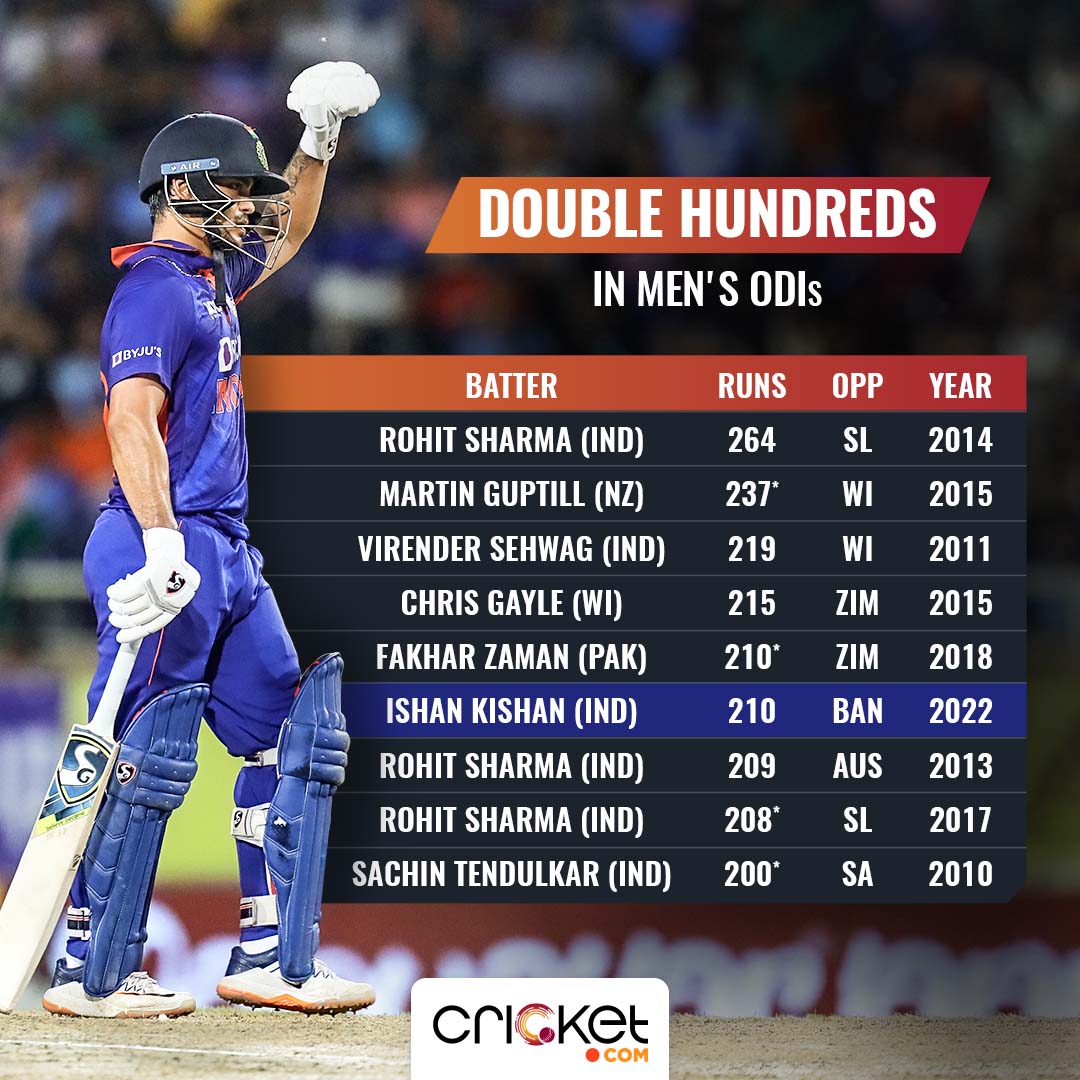 -By scoring a century, Kishan became the first Indian opener to register a century in ODIs since January 2020. Rohit against Australia in Bengaluru was the last.

-Post Rohit’s century, India had played 35 matches before their opener registered another. Including this match, the 36-match wait is the longest span between centuries for Indian openers. Previously, from 1984 till 1986, they had played 33 without one.

-Further, Kishan registered 150 in just 103 balls, the fastest by an Indian. Previously, Virender Sehwag against West Indies had reached the milestone in 112 balls.

-Kishan went past Sourav Ganguly’s 183 against Sri Lanka in Taunton in 1999, and registered the highest score for an Indian left-hander in ODIs. 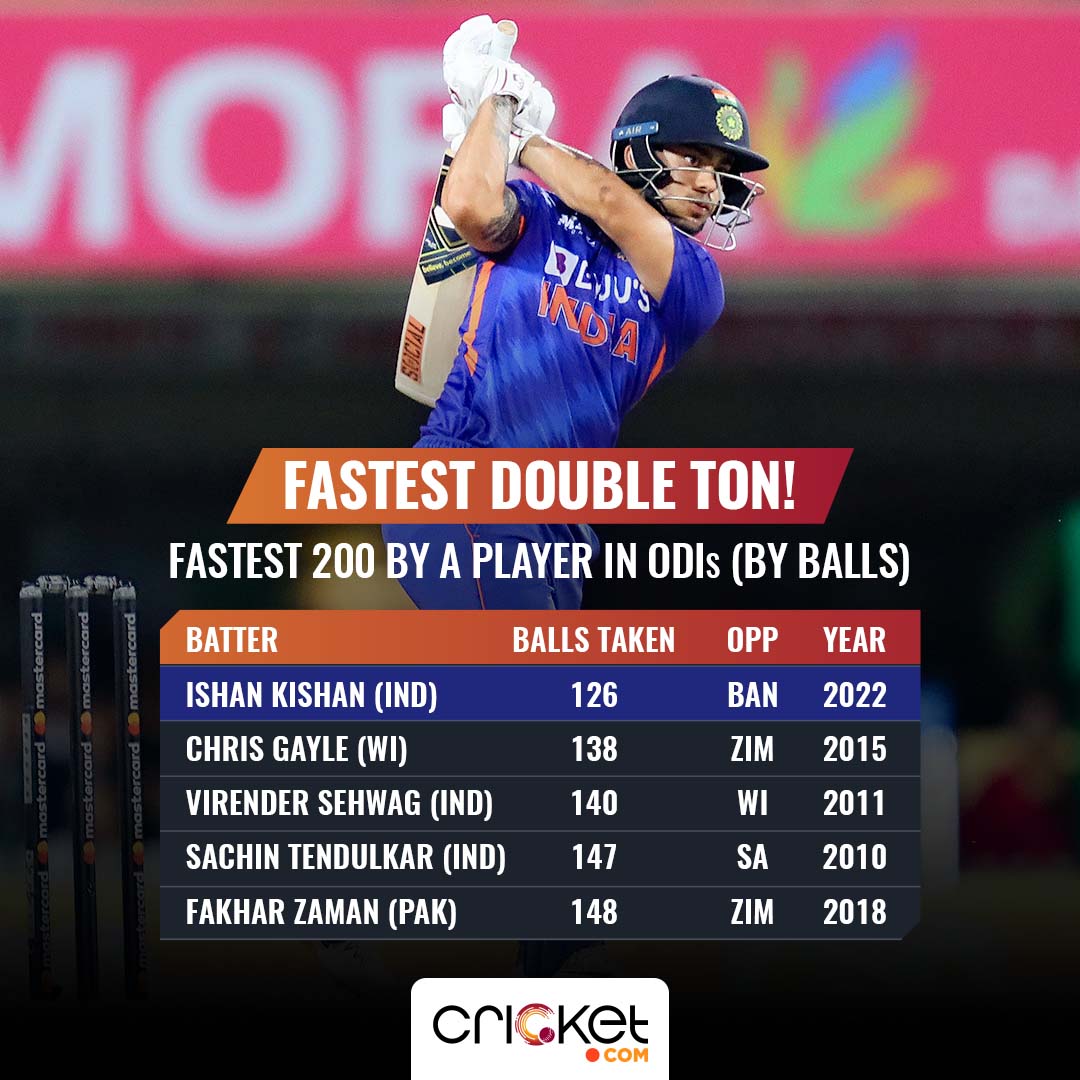 -He registered a double ton in just 126 balls, the fastest by a batter in ODIs. Sehwag against West Indies in 2011, reached it in 138 balls. Also, he became the first player to achieve this feat within the 40th over mark.

-At the age of 24 years and 145 days, Kishan became the youngest double centurion in ODIs. Previously, Rohit Sharma at 26 years and 197 days, held the record. 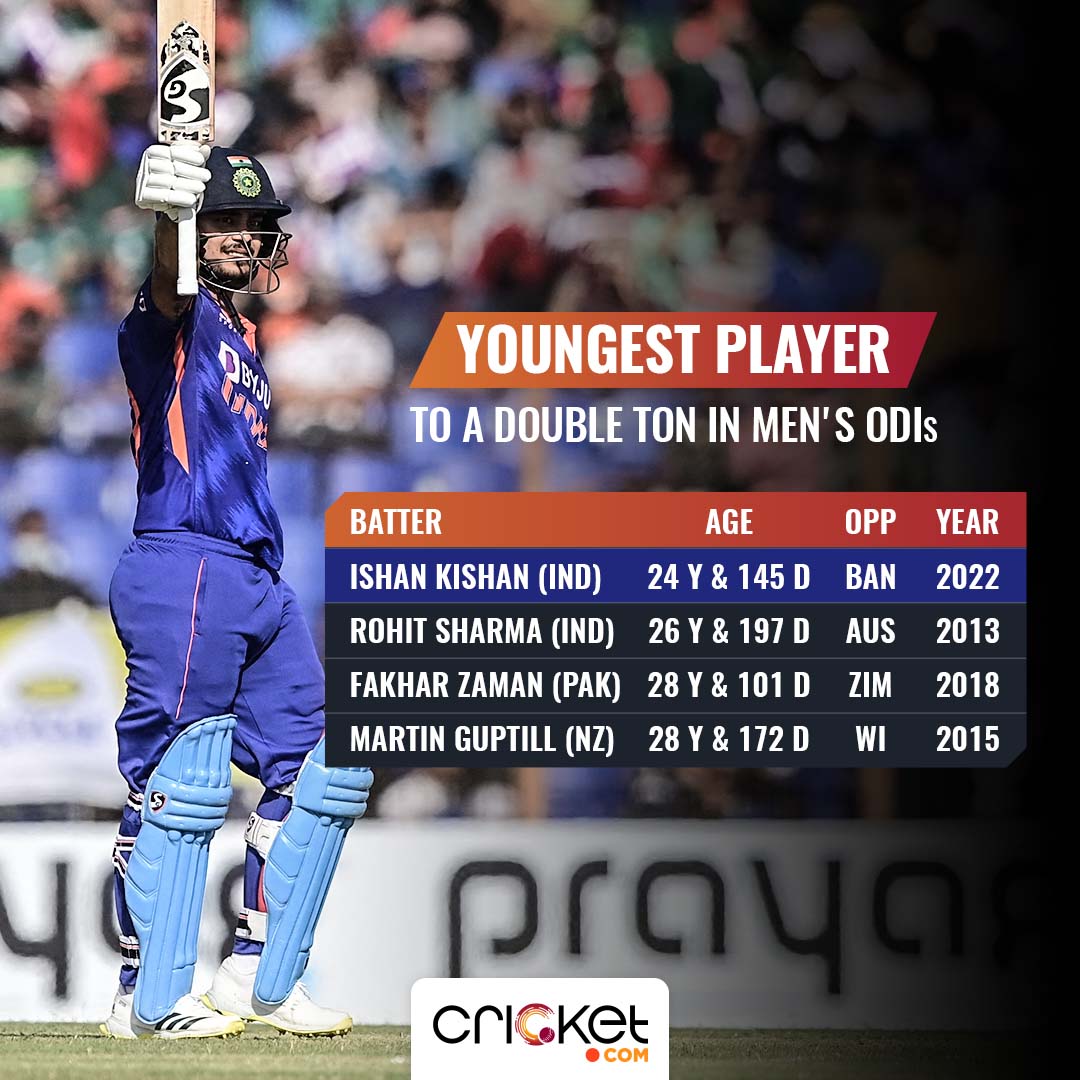 -His final score of 210, is the highest maiden hundred for a batter in ODIs. In fact, he is the first one to register a double ton. Previously, the highest maiden ODI hundred score was held by Charles Coventry (194*) of Zimbabwe in 2009 against Bangladesh.

Finally, after a drought of three years 118 days and 26 innings, Kohli unfurled his arms in ODIs. The last time he registered a ton was on 14th August 2019 against West Indies in Port of Spain. 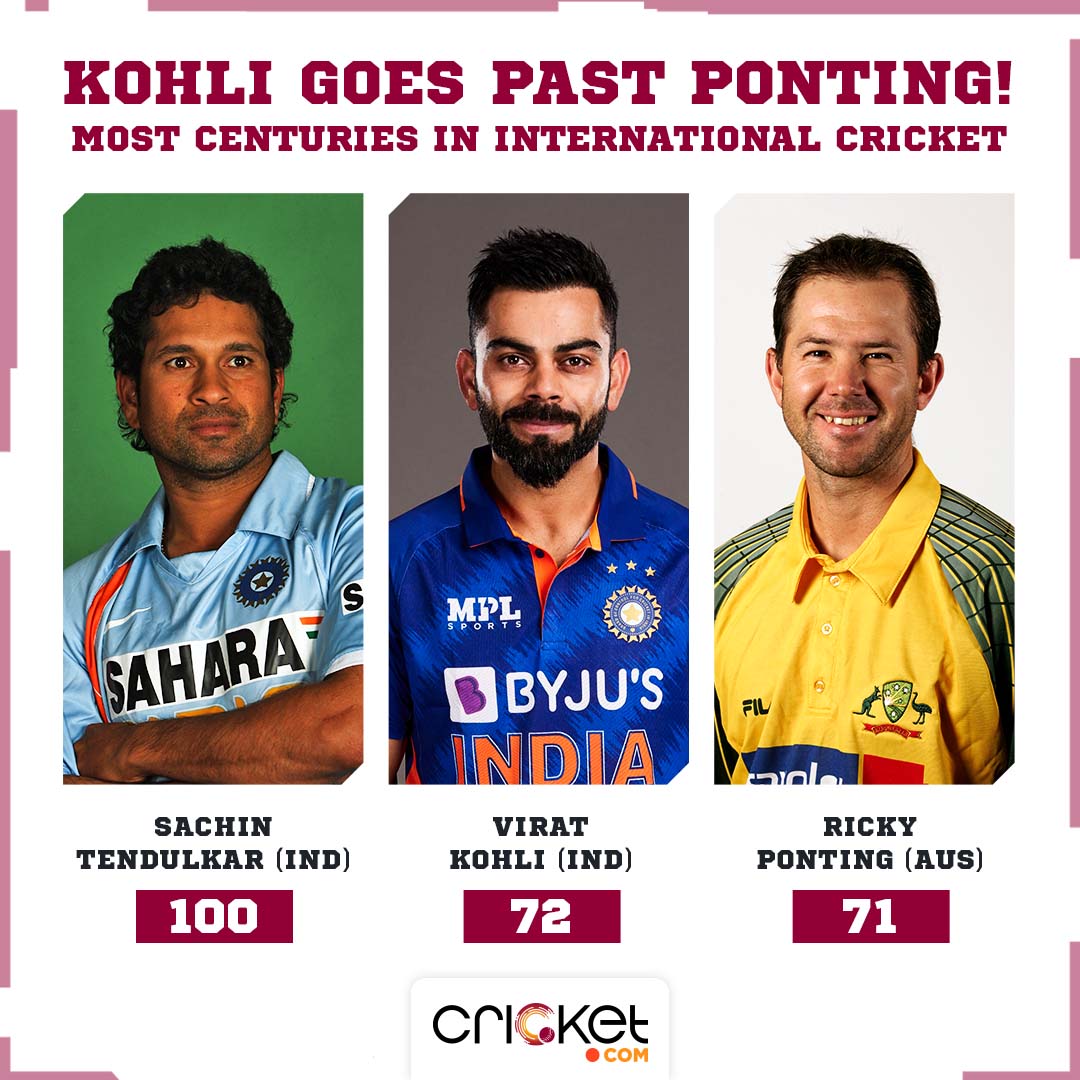 In international cricket, this was his 72nd century, 44 in ODIs, 27 in Tests and one in T20Is. By virtue of this ton, he went past Ricky Ponting’s tally of 71 international 100s. The great man, Sachin Tendulkar is the only one ahead of him with 100.

India breach the 400-mark for the sixth time

On the back of a double ton by Kishan and century by Kohli, India hoisted 409/8. In ODIs, this was the sixth time they had posted 400+ total, the joint most alongside South Africa. 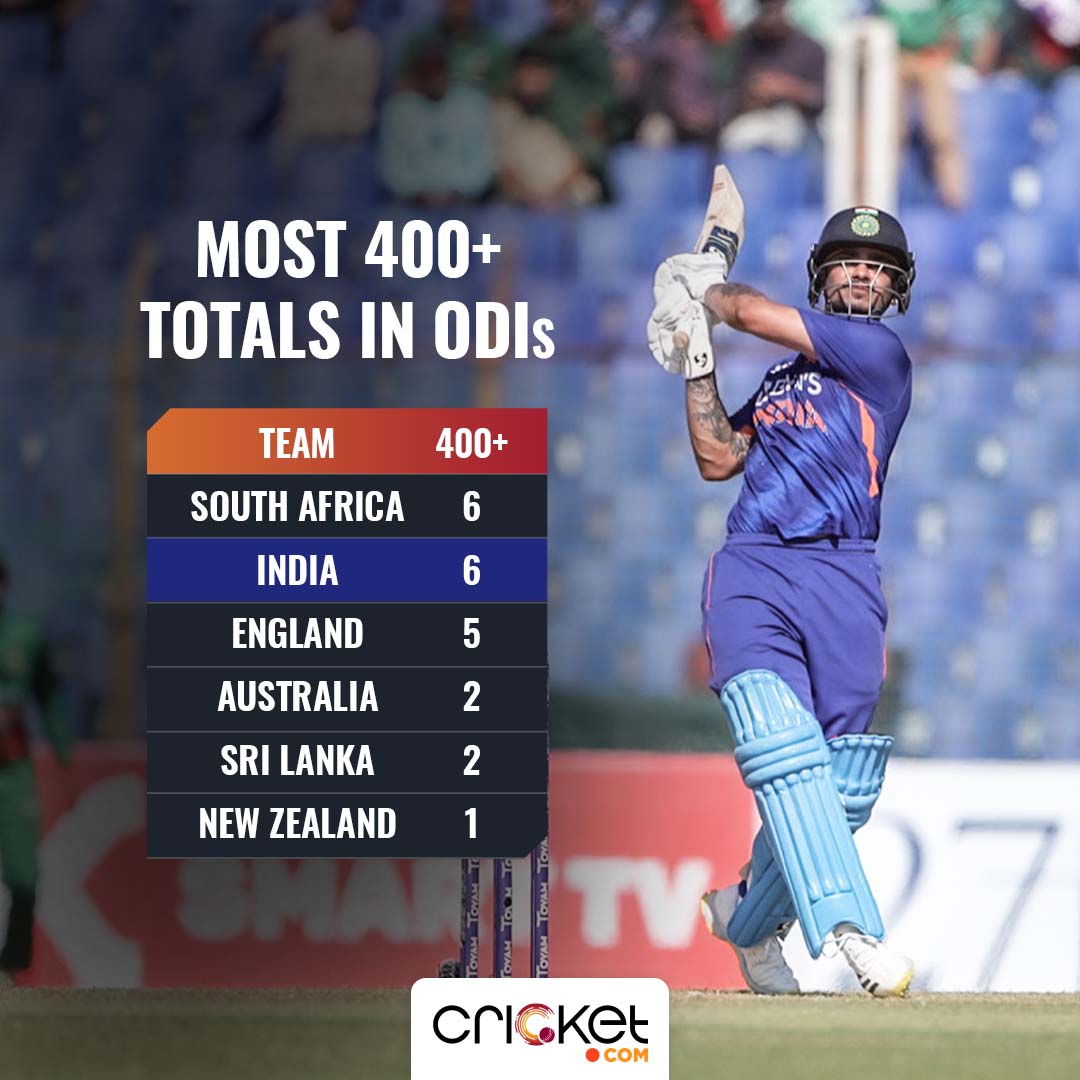 In Bangladesh, this was the first innings in which a 400+ total was witnessed. Previously, India in the opening game of the 2011 World Cup had hoisted 370/4, which was the highest.

The second wicket partnership between Kohli and Kishan, hoisted 290 runs, the third best for any wicket for India in ODIs. The top two belong to Rahul Dravid-Sachin Tendulkar (331) against New Zealand in 1999 and Dravid-Ganguly (318) against Sri Lanka in 1999 World Cup. 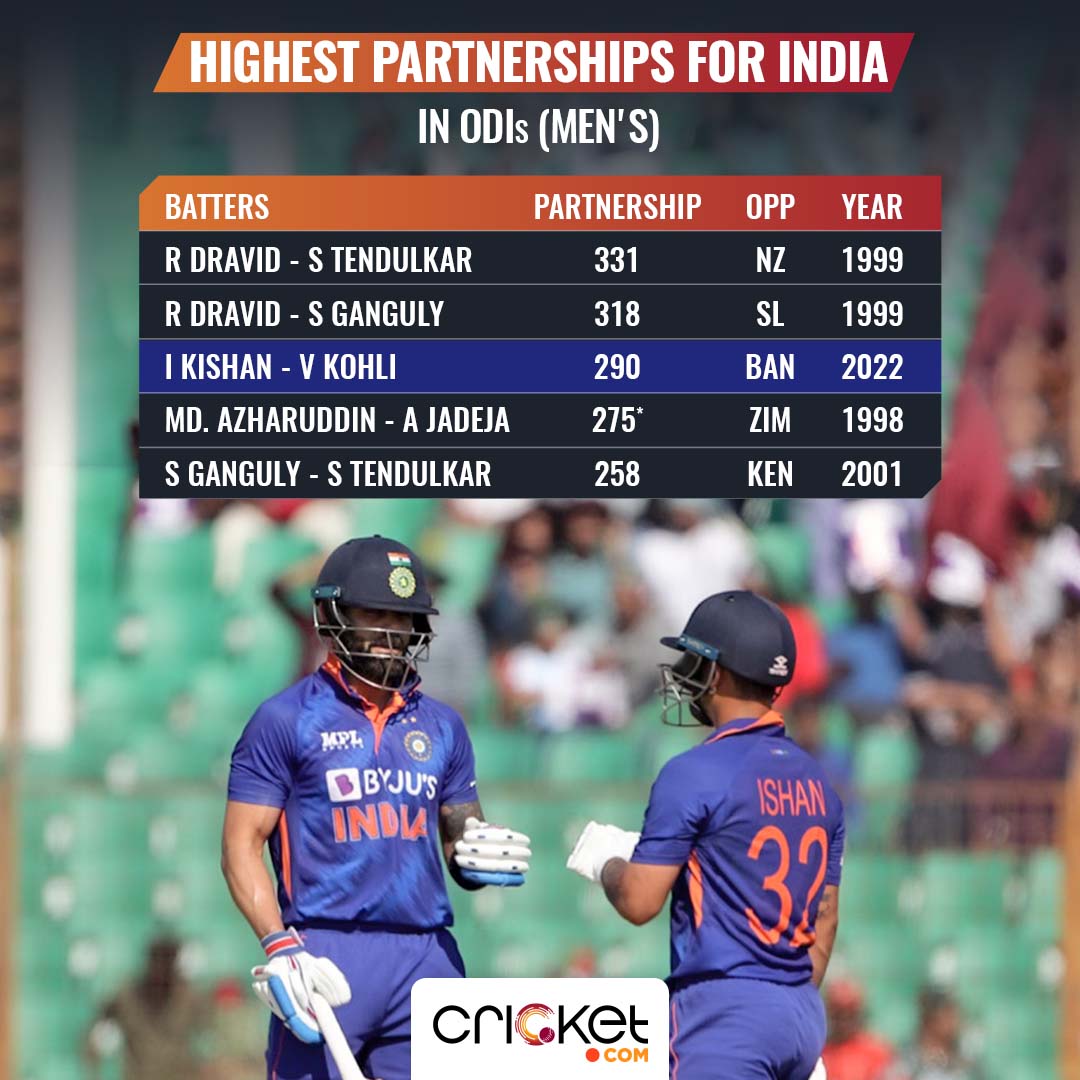 In an ODI innings, this is only the third instance to involve a double century and century. West Indies in 2011 against Ireland had Gayle (215*) and Marlon Samuels (133*), and Pakistan against Zimbabwe had Fakhar Zaman (210*) and Imam-ul-Haq (113).

With a win margin of 227 runs, India registered their third biggest win in ODIs. Against a Test playing nation, this is their biggest margin of win by runs. The other two wins, by 257 and 256 runs, came against Bermuda in 2007 and Hong Kong in 2008.