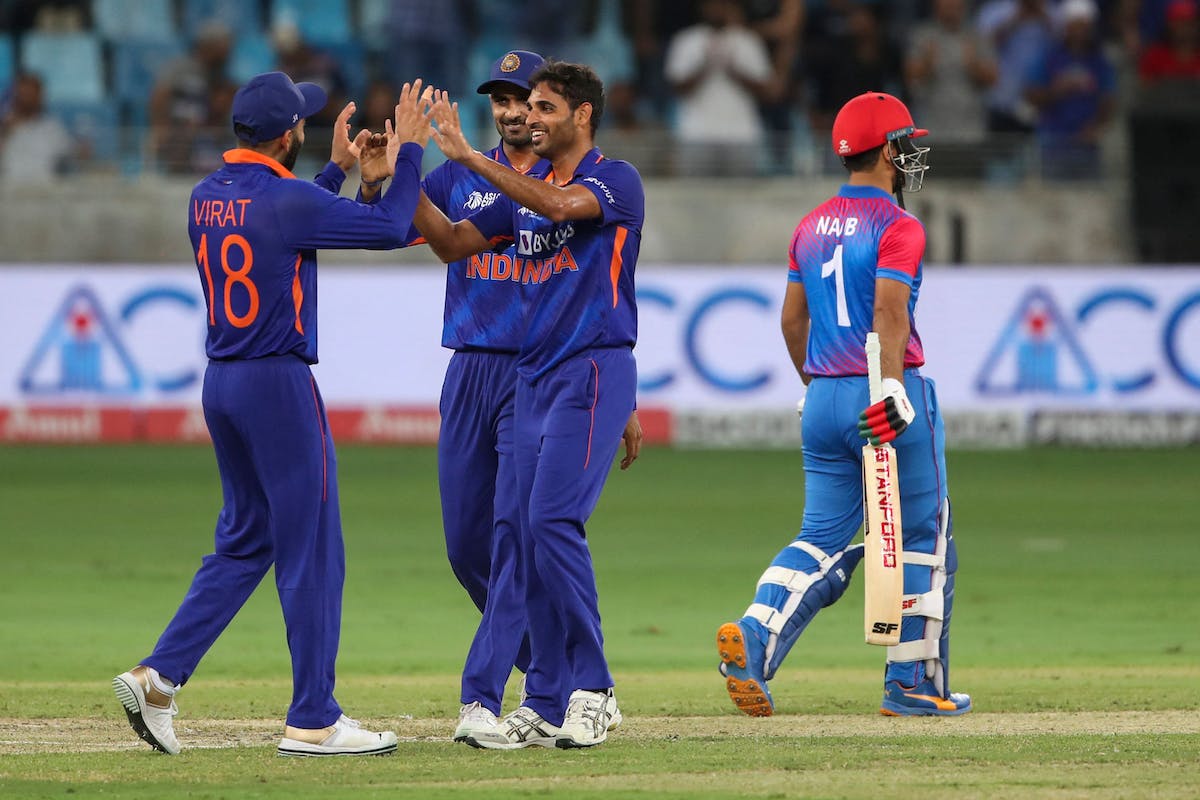 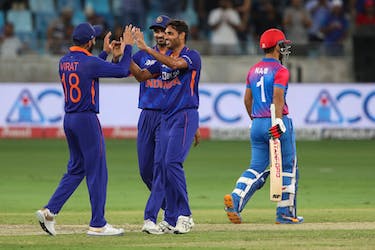 Here are a few noteworthy stats from Match five of Super Four, Asia Cup 2022, between India and Afghanistan in Dubai

Finally, after 1020 days and 83 innings, Virat Kohli recorded his 71st international century. But, who would have expected it to be in the shortest format. Kohli scored an unbeaten 122, his first century in T20Is, to power India to a massive total of 212/2. An already depleted Afghan side, were rattled further when Bhuvneshwar Kumar bagged four wickets in the first six overs. They crawled to a score of 111 in their full 20 overs and handed India a 101-run win. Plenty of stats from the match, starring Kohli and Bhuvneshwar:

Kohli breaks the jinx in an innings garlanded with records

In the eighth over, thanks to a drop from Ibrahim Zadran at deep mid-wicket, Kohli registered his 100th T20I six. He became the second Indian after Rohit Sharma (171) to reach the milestone.

With a half-century of 32 balls, Kohli registered his 33rd score of over 50, which is the most for a batsman in the format.

This was Kohli’s third 50+ score in the tournament. In a T20I series, this is the fifth time Kohli is scoring three or more 50+ scores. No other batter has achieved this feat more than twice.

In the penultimate over, Kohli registered his first T20I century with a six and became the sixth Indian to hit a century in this format.

He also became the fourth Indian after Suresh Raina, Rohit Sharma and KL Rahul to hit a century across all formats. 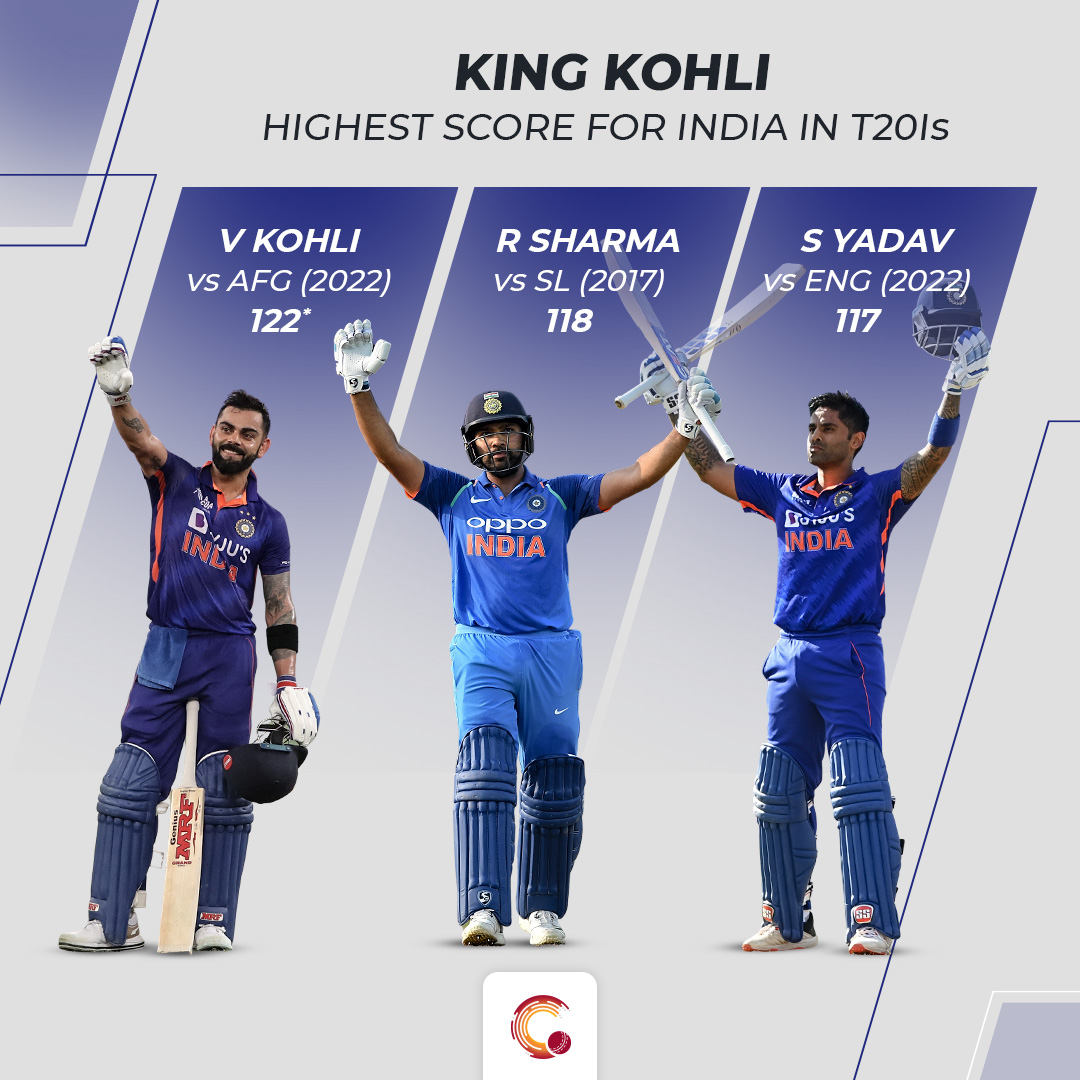 Kohli ended his innings on an unbeaten 122, which is the highest individual score by an Indian in T20Is, going past Rohit’s 118. 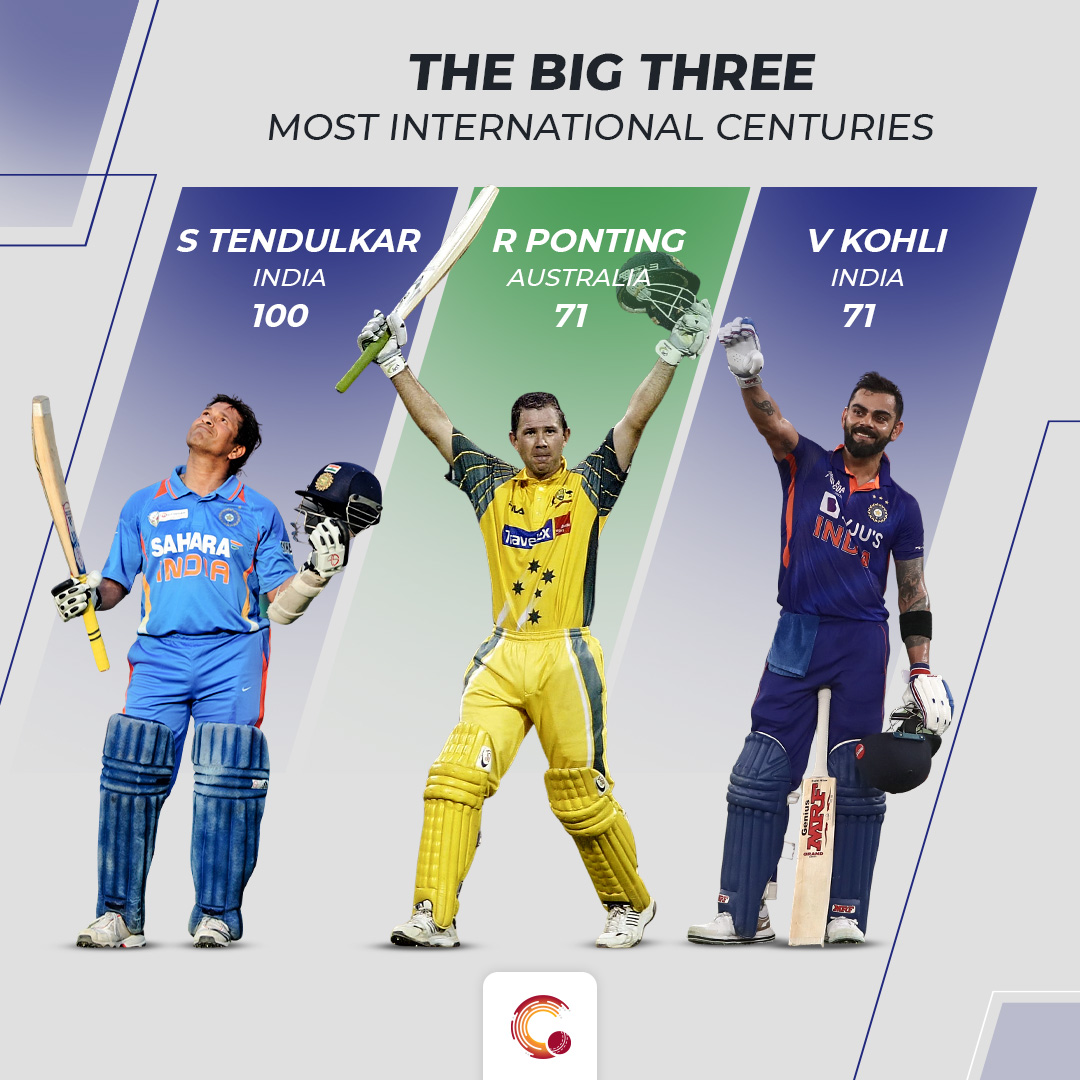 In international cricket, Kohli now has 71 centuries, which is the joint-second most. Among the three batters to have 71 or more international centuries, Kohli (522) is the quickest to achieve the feat in terms of innings.

In all T20s, this was Kohli’s sixth century, which is the joint most among Asian batters alongside Rahul, Rohit and Babar Azam. 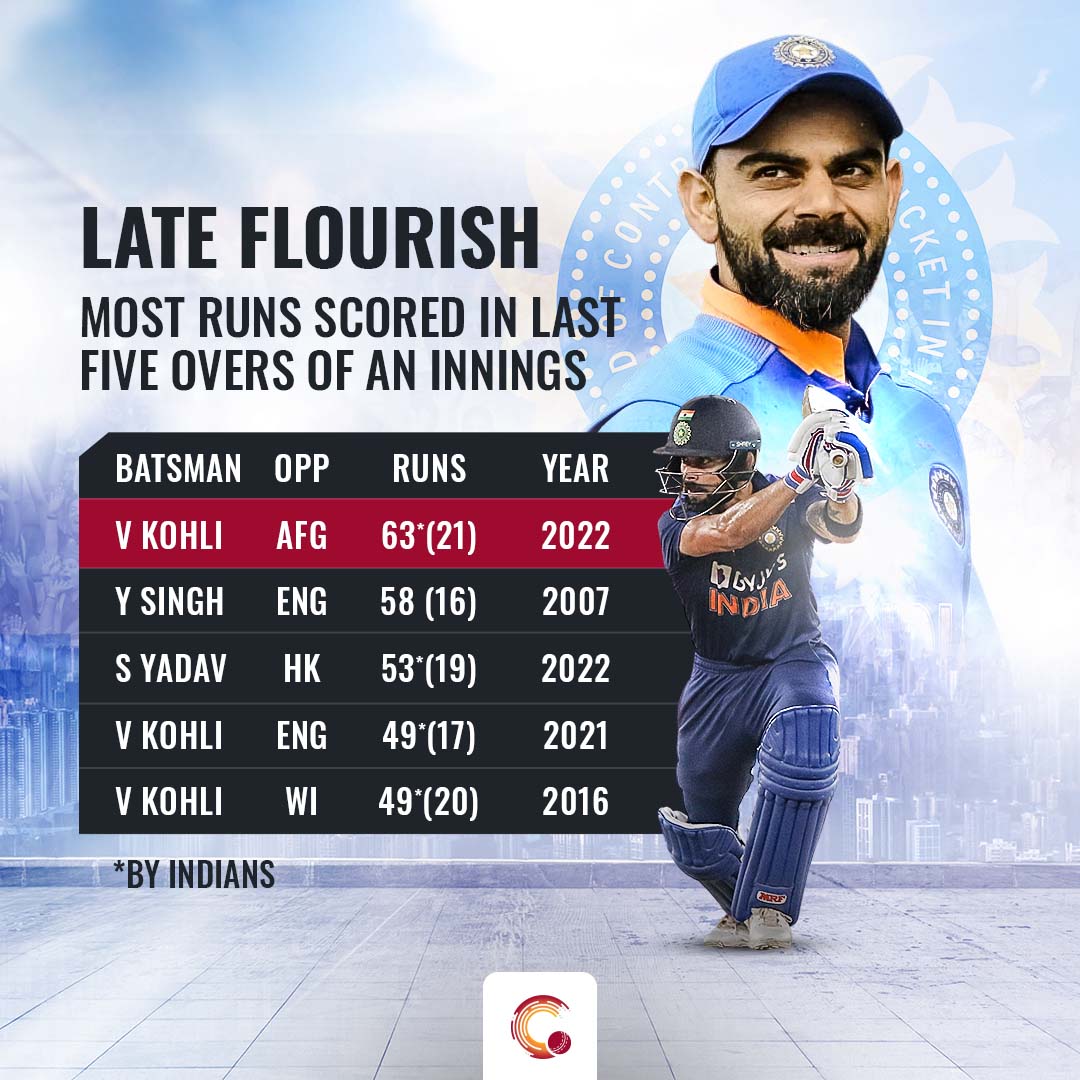 It was Kohli with the bat and Bhuvneshwar with the ball while defending. He started off the innings with two wickets in the first over. 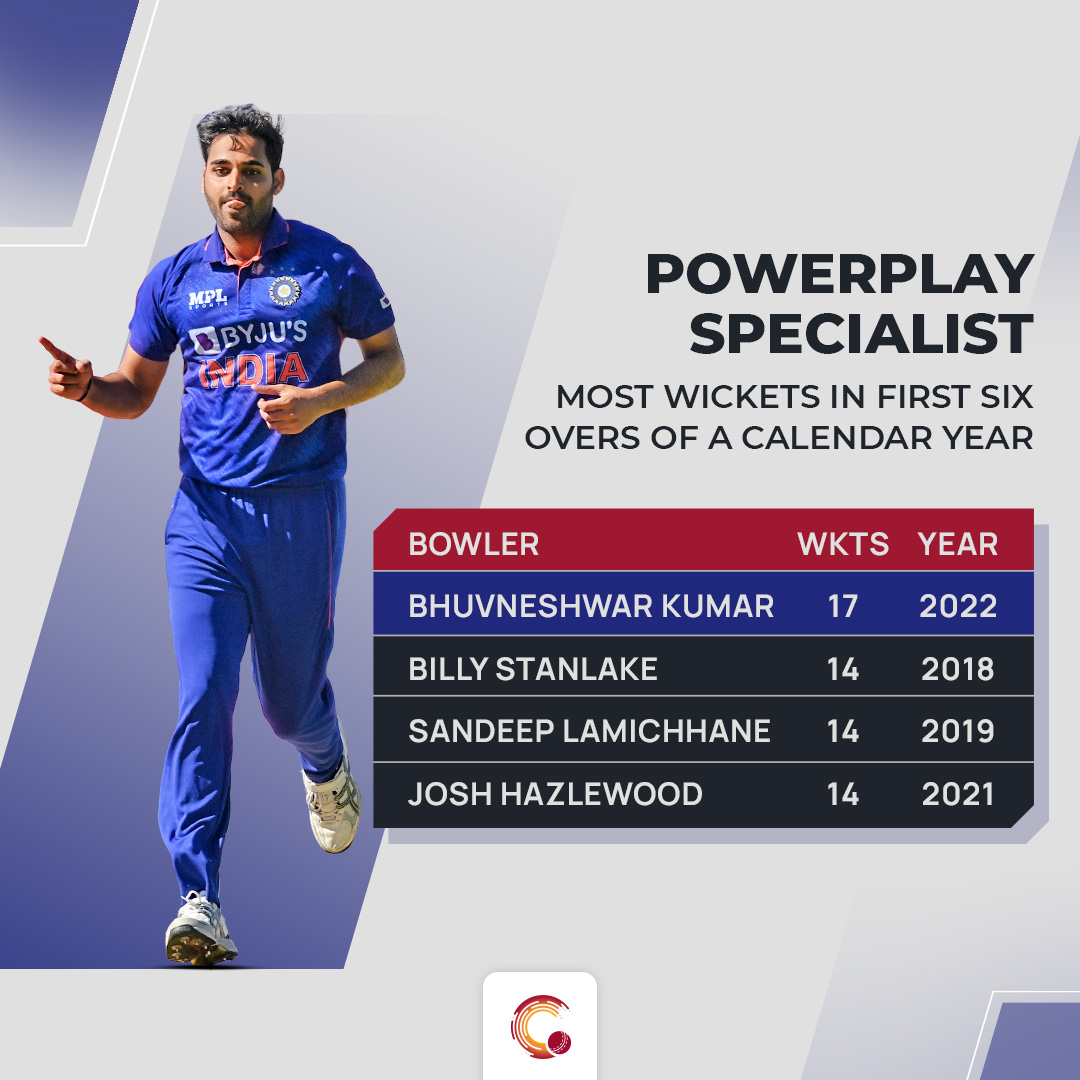 With those two wickets, Bhuvneshwar logged 15 wickets in the first six overs in 2022. This is the most wickets bagged in this phase by a bowler in a calendar year of T20Is. Adding two more, he now has 17 wickets.

In overall T20Is, Bhuvneshwar has 16 wickets in the first over of the innings, which is the joint most for a bowler alongside Bilal Khan of Oman.

He then went on to bag another two wickets in his second over, but couldn’t pick up his fifth inside the powerplay. Nevertheless, his spell of 4/4 in the first six overs were the best by an Indian in this phase of an innings. 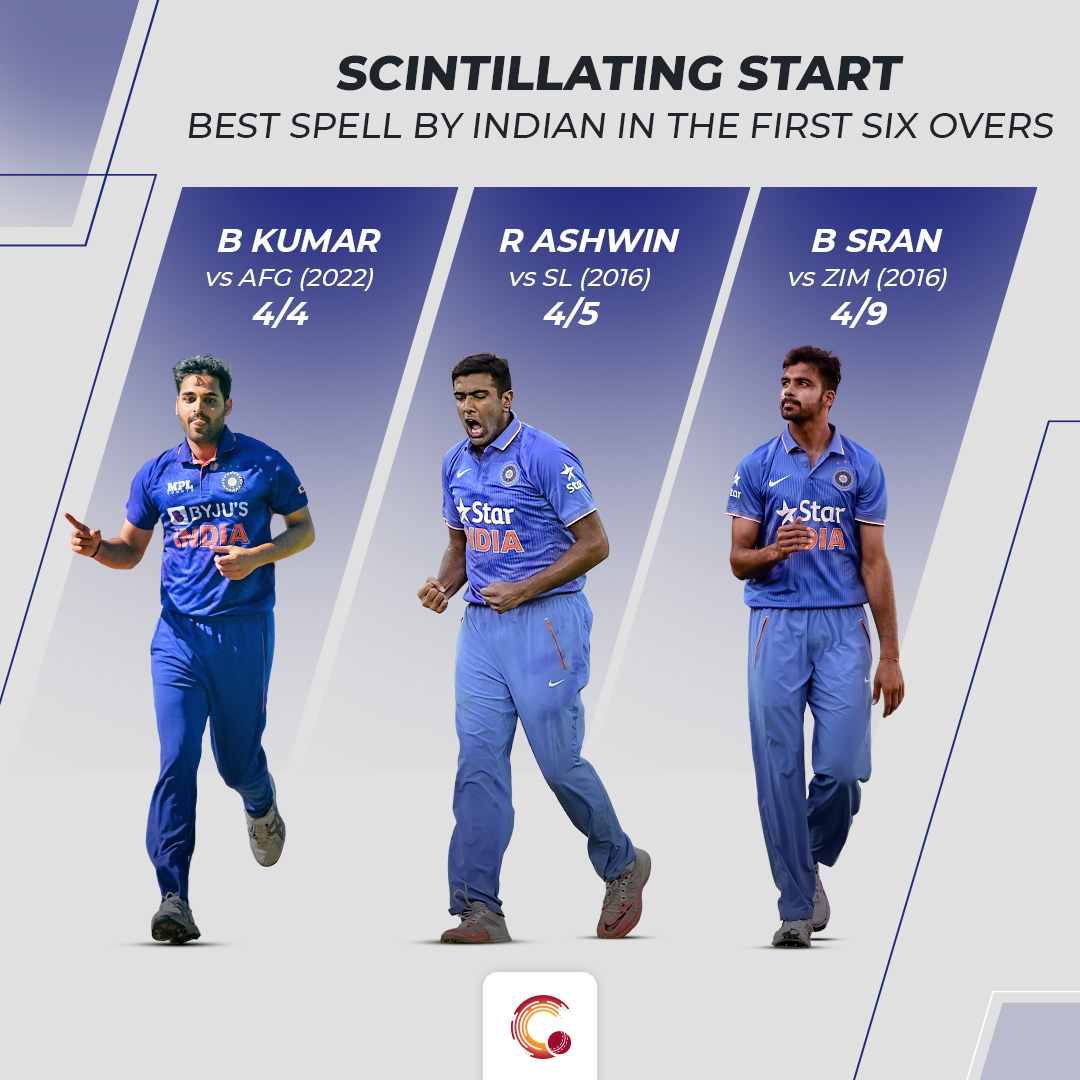 In his fourth over, Bhuvneshwar picked up his fifth and became the first Indian to bag two or more five-wicket hauls in T20Is.

In T20Is in 2022, this was Bhuvneshwar’s third four-plus wicket haul, which is the joint most by a bowler in a calendar year. Yuzvendra Chahal of India in 2017 and Nalin Nipiko of Vanuatu in 2019, also had three.

In T20Is, this was his fifth four-plus wicket haul. Among pacers, only Umar Gul of Pakistan has more than him. 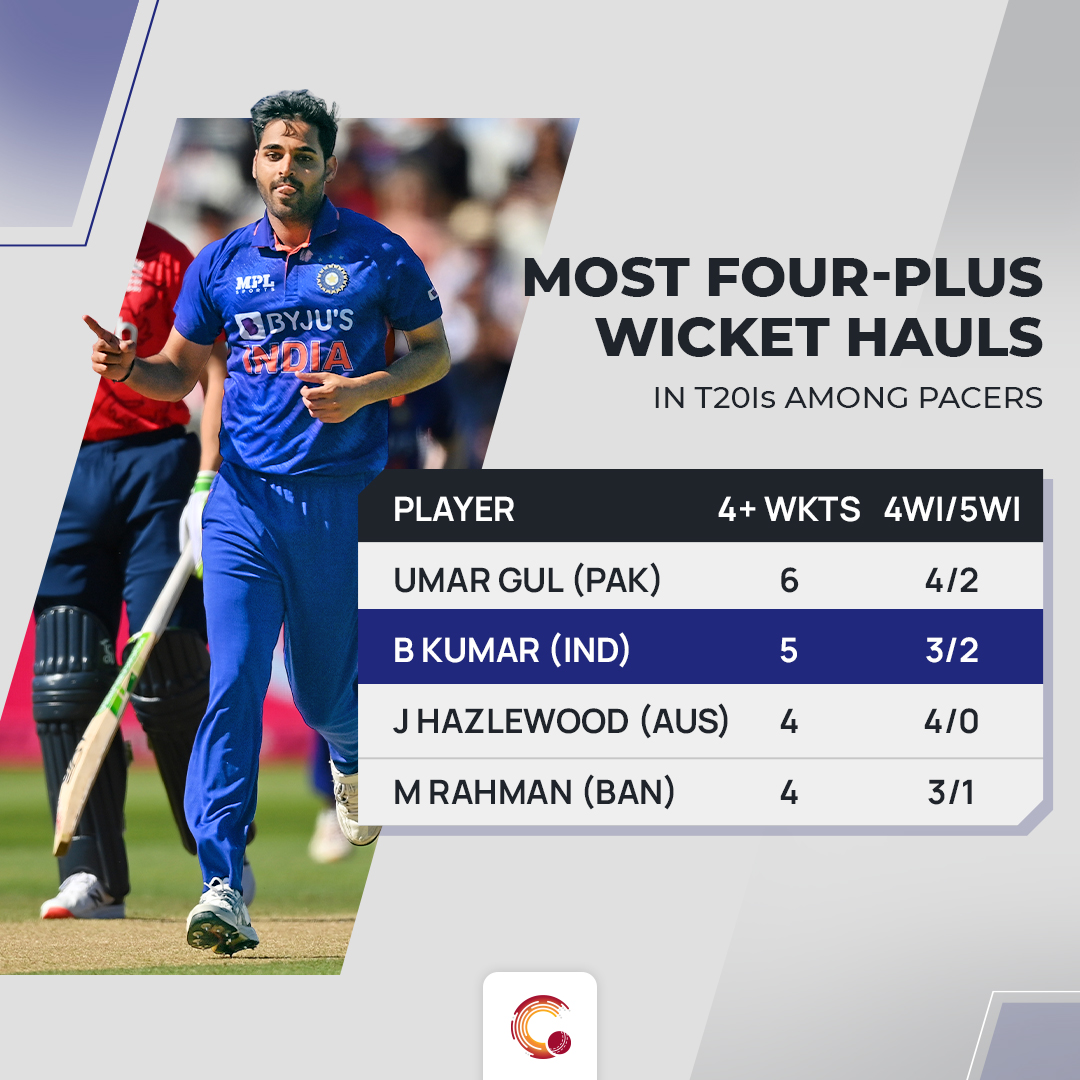 In T20Is against Afghanistan, Bhuvneshwar became the first bowler to bag a five-wicket haul. Nasum Ahmed (4/10 in 2022) of Bangladesh, had the best spell prior to Bhuvneshwar.

Bhuvneshwar’s spell today read: 4-1-4-5. In T20Is, this is the joint least runs conceded by a bowler to pick up a five-wicket haul. Pedro Arrighi of Argentina, had a similar spell against Brazil in 2019.

In T20Is among Indians, this is the most economical four-over spell. Prior to this, Ravi Ashwin in 2016 against Sri Lanka and Bhuvneshwar in the same year against U.A.E, had finished their spell at an economy of 2.0.

With the five-wicket haul, Bhuvneshwar now has 31 wickets in 2022, which is the most by an Indian bowler in a calendar year. Overall, among pacers from full member nations, he is currently tied with Andrew Tye’s tally of 31 wickets in 2018. 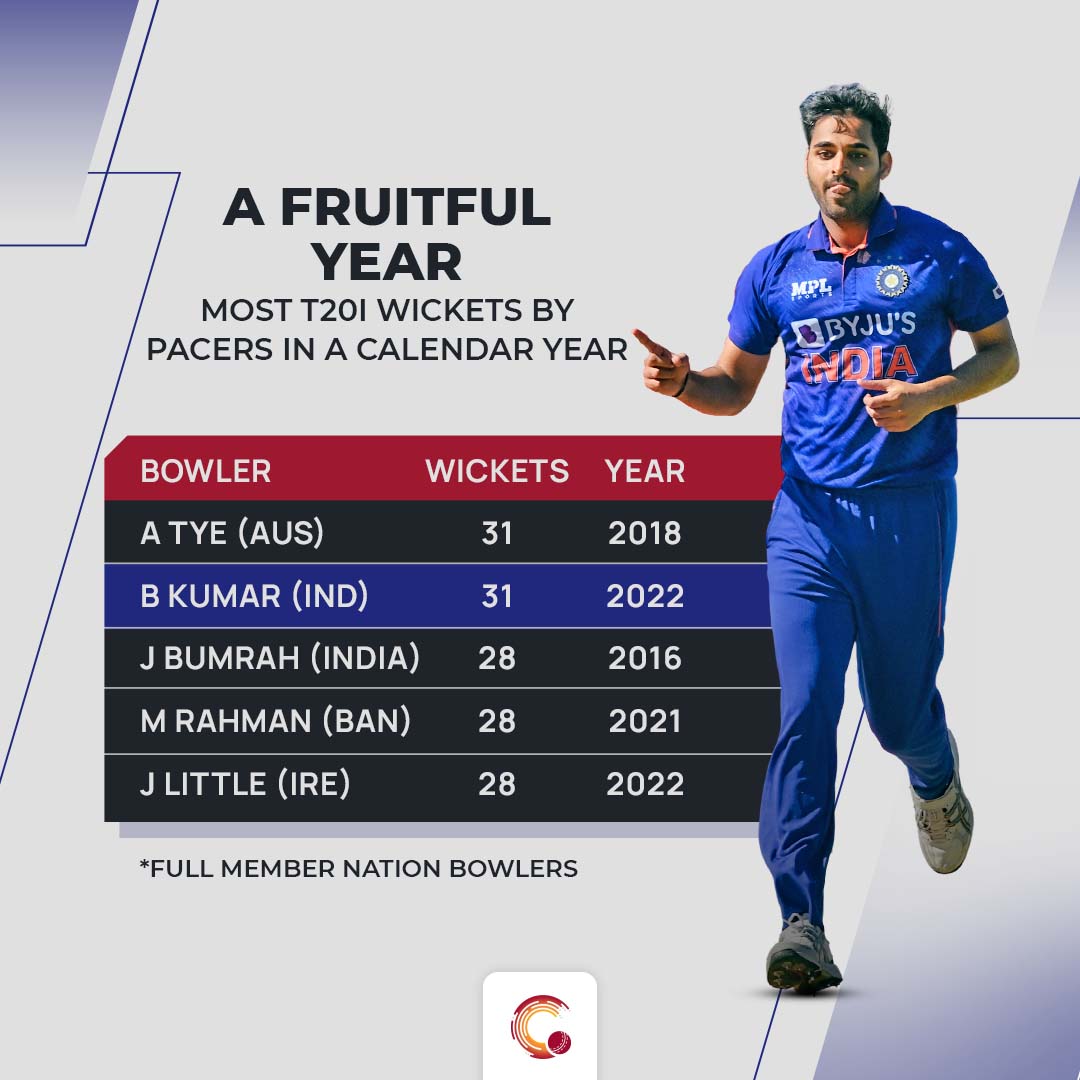 Currently, with 84 T20I wickets, Bhuvneshwar is the leading wicket-taker for India, surpassing Chahal’s 83.

Afghanistan were reduced to 21/5 in the first six overs, which is the best powerplay bowling performance for India. Previously, against Sri Lanka in 2016, they had reduced the island nation to 29/5.

In T20Is, this is the second match in which India has witnessed a century as well as five-wicket haul. Against England in 2018, Kuldeep Yadav bagged 5/24 and Rahul scored an unbeaten 101.