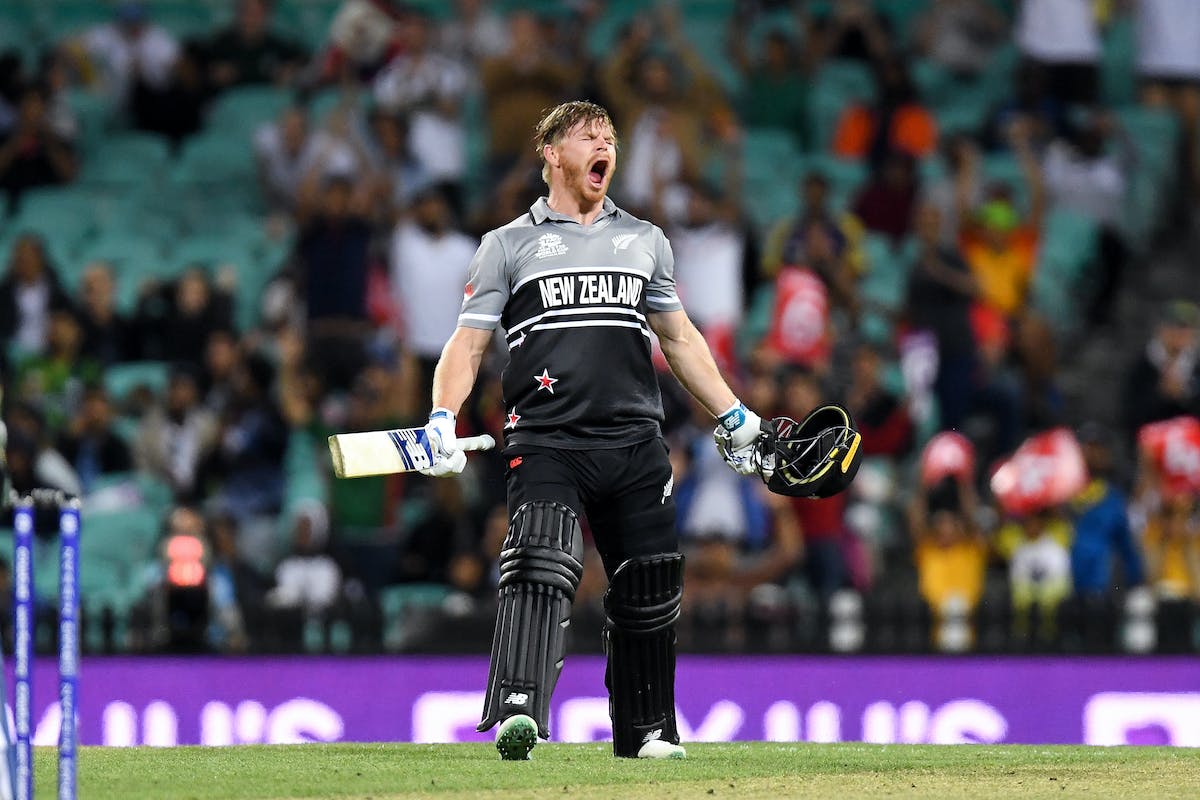 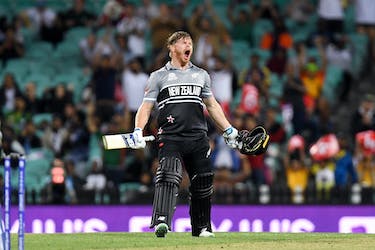 Apart from Glenn Phillips’ century, the match was a snoozefest. Batters from both teams struggled to score runs, but Sri Lanka’s misery was an expanded one with the bat. Despite losing their top three early, New Zealand posted a total of 167/7, courtesy Phillips. In reply, Sri Lanka crumbled for 102 after their top four were bundled out for single digit scores.

Apart from Phillips, none of the top six batters of New Zealand scored above 100 in their innings. This actually replicates how good his innings was. He was dropped twice, but that doesn’t matter if he converts it into a big one. 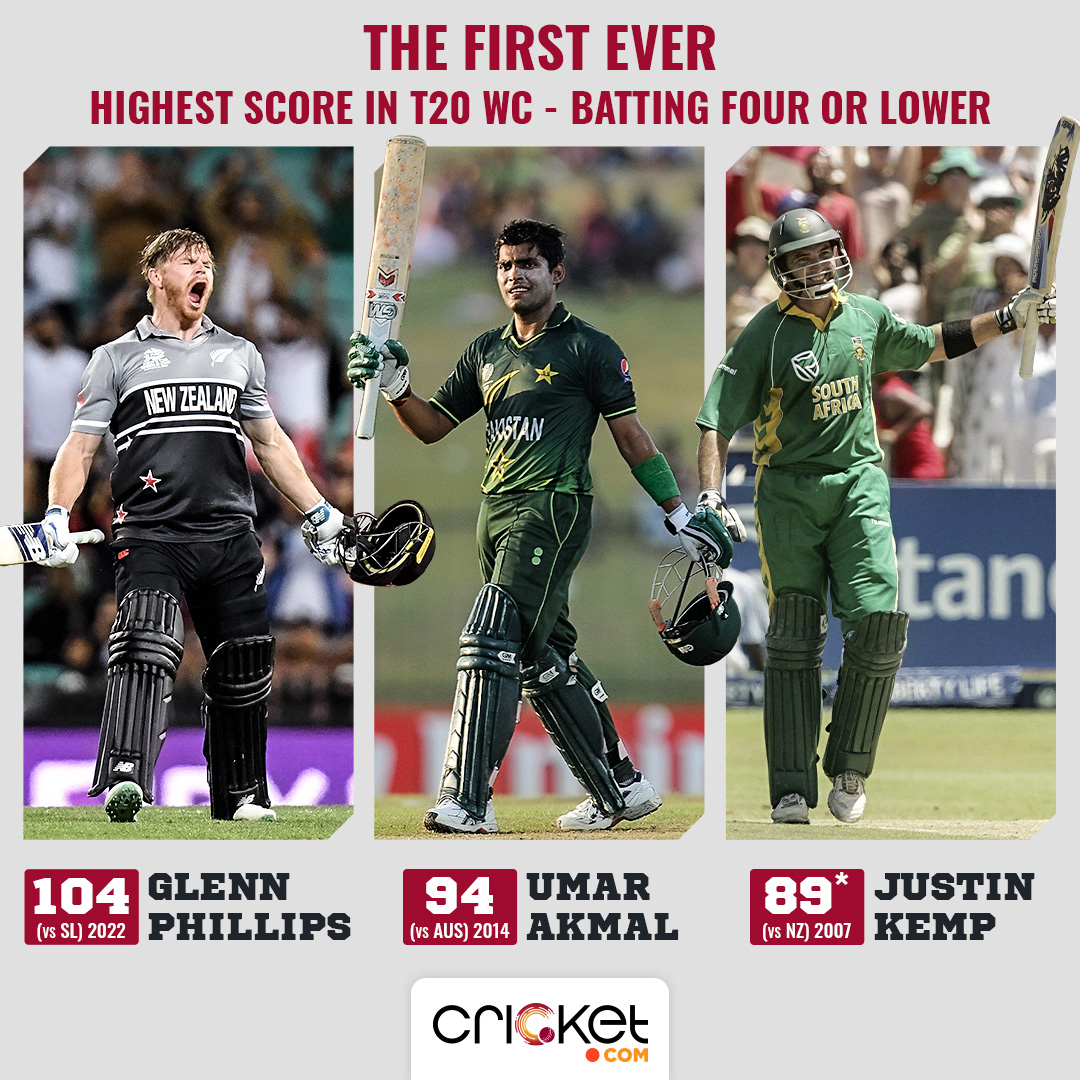 By scoring a 64-ball 104, Phillips became the first batsman in the T20 World Cup, to hit a century batting four or lower. He also became the second Kiwi batter after Brendon McCullum in 2012 against Bangladesh in Pallekele, to hit a century in WC. Overall in T20Is, he is now the fourth Blackcaps batsman to hit multiple centuries. Colin Munro with three leads the list. Martin Guptill and Brendon McCullum, also have two each. 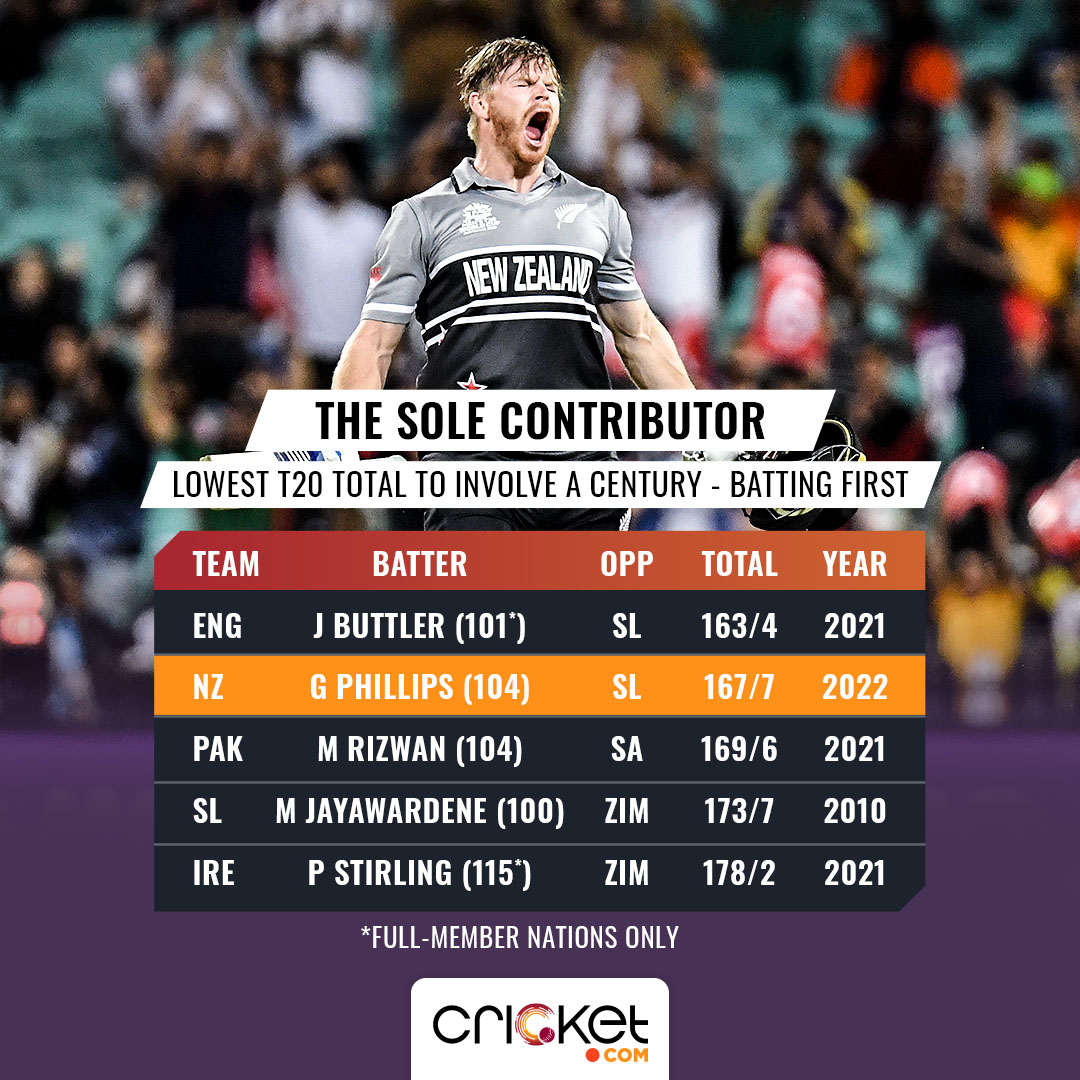 However, today wasn’t the case. Among full member nations, only England in the 2021 T20 WC, scored lower than New Zealand’s 167, after having a centurion. This was only the third instance of a team scoring lower than 170 in the first innings with a century.

Powerplay lows for both teams

The initial stages for both teams weren't easy. New Zealand in their innings were tottering at 25/3 in their first six overs. But, Phillips bailed them out to a competitive score. 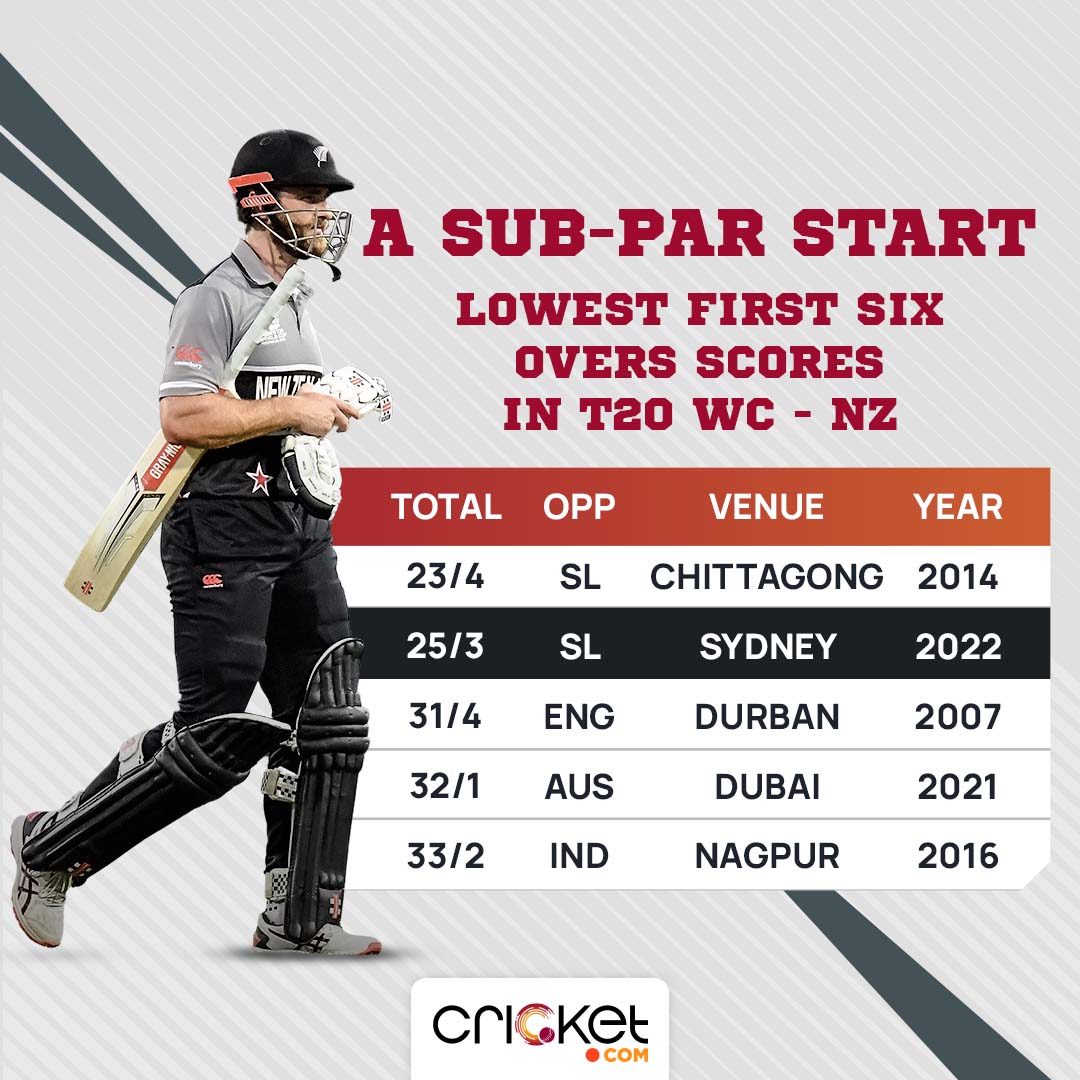 In the T20 WC, only once has New Zealand scored lower than their score from this match. Coincidentally, that also came against Sri Lanka in 2014 in Chittagong. The match in which Rangana Herath bowled a magical spell of 5/3 and guided Sri Lanka to a win. 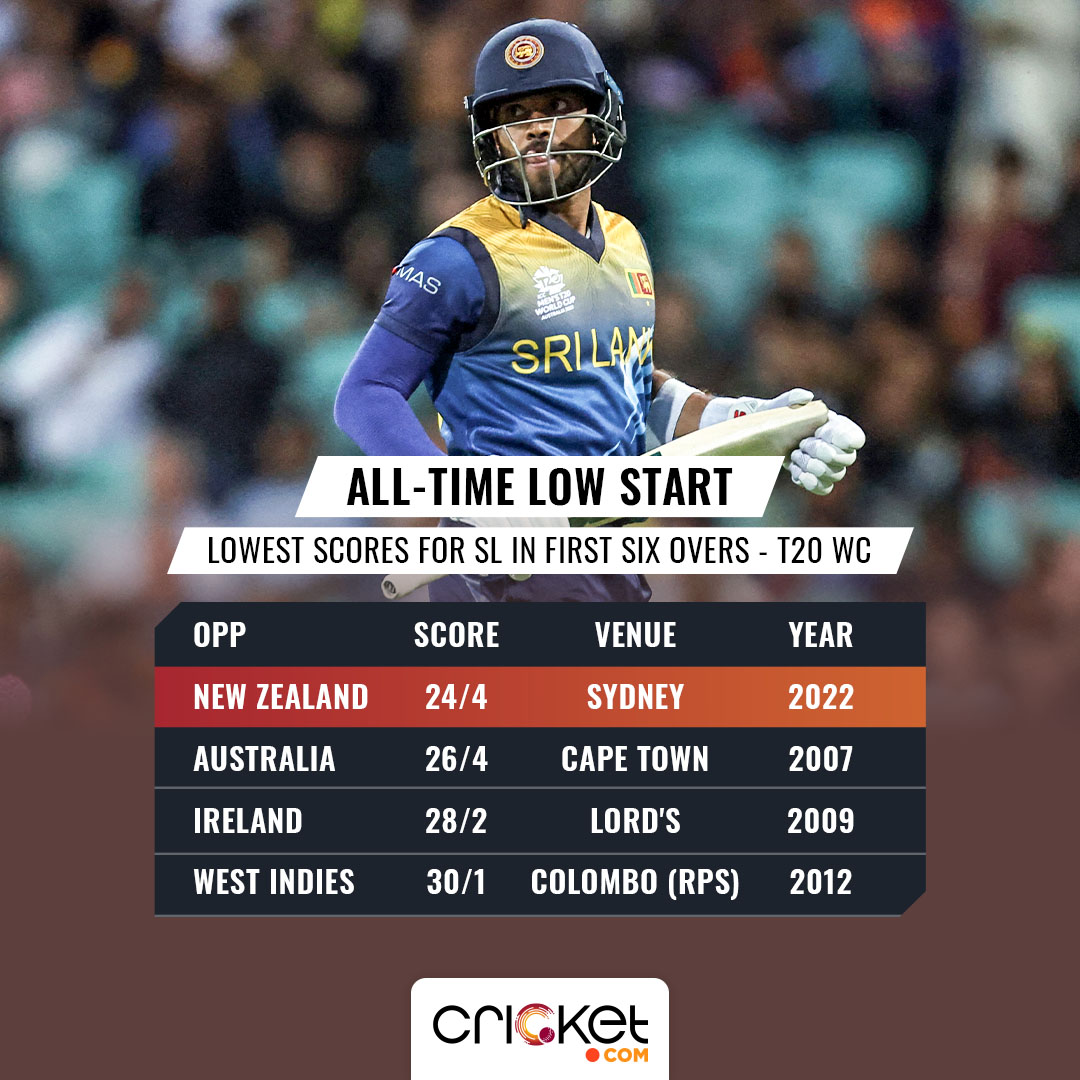 In the chase, Sri Lanka were in a similar state. In fact, they were in deeper trouble as they were chasing. They had lost one more wicket and had scored a run less. For them, this is the lowest power play total in T20 WC. In this edition, Sri Lanka’s score of 24/4 is the second and New Zealand’s 25/3 is the third worst.

Off to a great start

Defending an average total, New Zealand were off to a good start, courtesy Tim Southee. After bowling four consecutive dots, the pressure built on Pathum Nissanka and he departed playing a rash shot in the fifth ball of the first over. 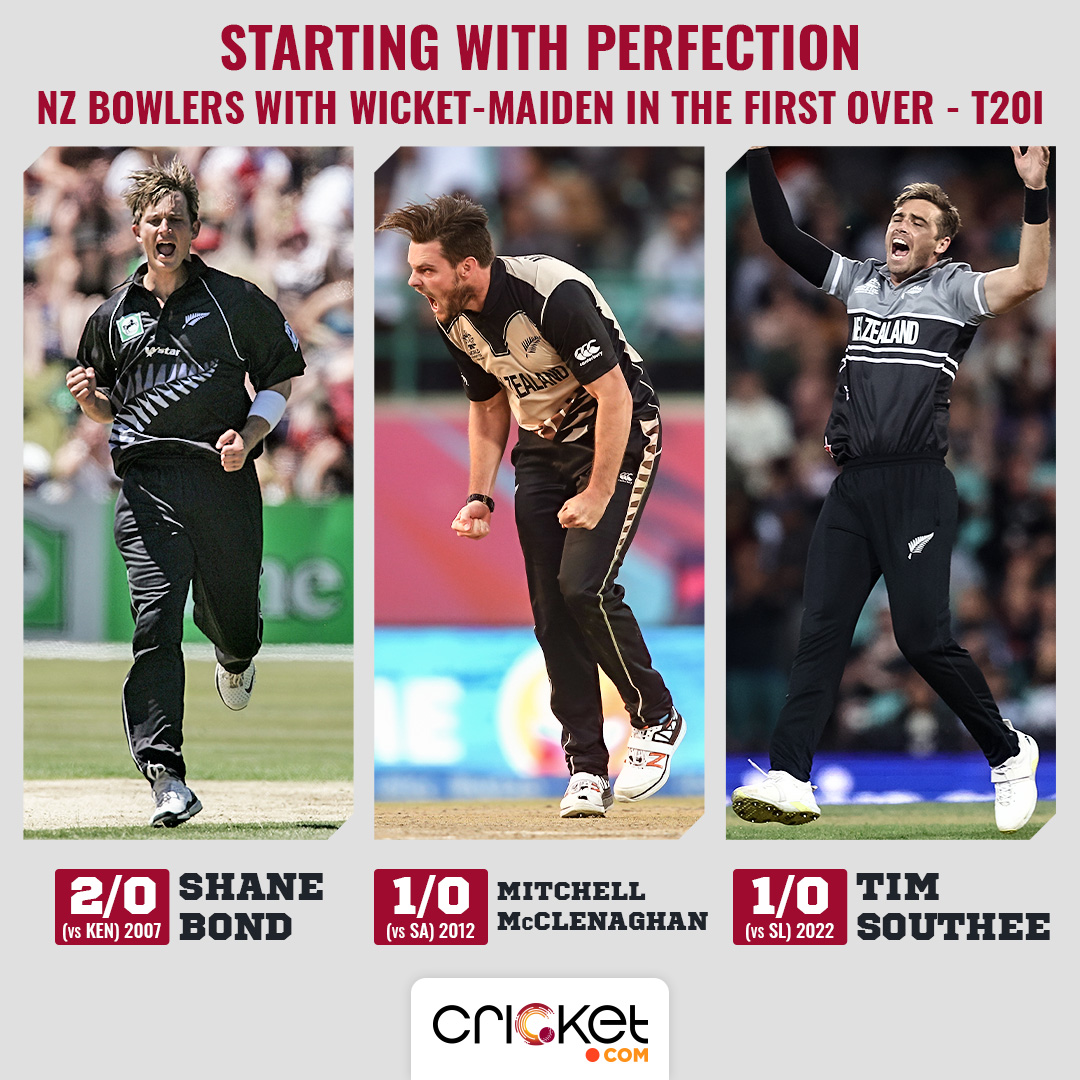 Bhanuka Rajapaksa (34) and the Sri Lankan skipper Dasun Shanaka (35) were the only two Lankan batters to reach the double digits. Including their top four, five other batters were bundled out for single digit scores.

In a T20 WC innings, these are the most number of single digit scores suffered by Sri Lanka. Owing to their dismal batting performance, they also suffered their fourth lowest score in T20 WC. Their lowest came against Australia in 2010 in Bridgetown.

Top order failure for both teams

So, both teams’ top three failed in this game. In a T20 WC match, this was the first encounter in which all six players (top three from both teams) suffered single digit scores.