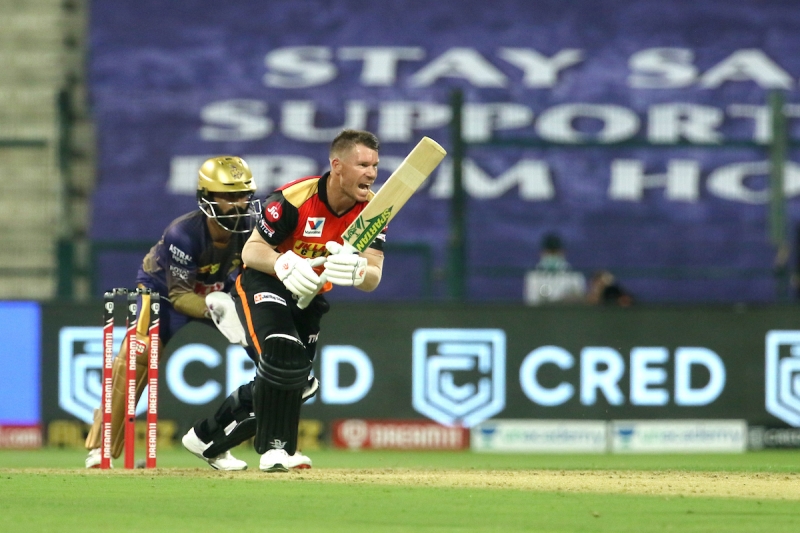 We are into the second half of the league stage in the 2020 Indian Premier League (IPL) and, as expected, there is a lot of competition for the playoff spots. There is just a two-point gap between positions four and seven and two of those four teams – Sunrisers Hyderabad (SRH) and Kolkata Knight Riders (KKR) – will face off at the Sheikh Zayed Stadium in Abu Dhabi on Sunday (October 18).

While Sunrisers made a middling start to the season with three wins from their first six matches, the Knight Riders seemed to be in an excellent position after securing four victories from their initial half-a-dozen games. But a week is a long time in the IPL and both teams now come into this match on the back of two consecutive losses. After six matches, SRH and KKR’s respective points-tally seemed adequate, but the fact that there has been no increase in the wins or points column after the following two contests is concerning for both sides.

One of the big issues for SRH has been their dependence on overseas players. Only one (Manish Pandey) of their top four run-getters this season until now is Indian. The three batsmen with the best batting average for them this season currently are Kane Williamson (38), David Warner (35.5) and Jonny Bairstow (35), all overseas batsmen.

In the bowling department, Rashid Khan – the sole overseas bowler to have played more than one match this season for SRH – has taken the most wickets (10) and has the best economy rate (5.3) for the franchise. Of course, they’ve been unfortunate with the injury to Bhuvneshwar Kumar, but the squad could have been hugely benefited with more experienced Indian players.

T Natarajan and Khaleel Ahmed have done reasonably well, taking nine and eight wickets respectively, albeit the latter’s economy rate of 9.7 is a bit of a concern. But on the whole, the SRH pace attack seems a bit one-dimensional and that is perhaps why they have been poor towards the end of the innings, conceding at an economy rate of 11.2 between overs 16-20.

Even when it comes to batting, SRH have had worries during the back end of the innings. Currently, they are the only team in this edition of the IPL to be scoring at less than 10 runs per over in the final five. 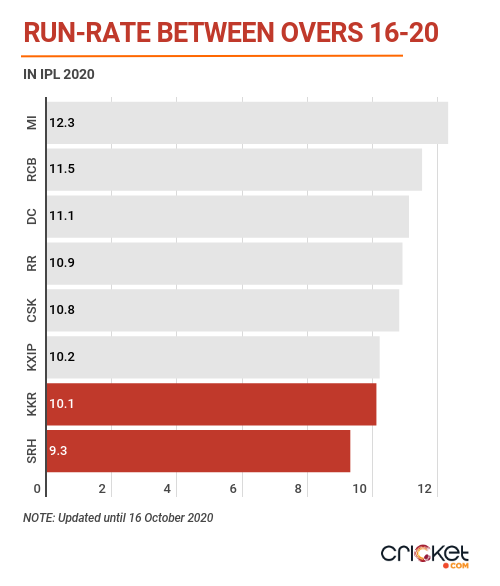 This is despite Williamson performing admirably. The New Zealand skipper is usually someone you associate as being a top-order run-accumulator, but he has been given the role of holding the middle-order together for SRH and he has done it well. In IPL 2020, he currently has a strike rate of 188.1 between overs 16-20. If the Indian batsmen around Williamson step up their game, SRH’s campaign could turn around positively in the upcoming weeks.

The Knight Riders, too, have concerns of their own. For a start, just like Sunrisres, they have conceded at an economy rate of 11.2 during the death overs as well. Sunil Narine seemed to be doing well in that aspect, but he is unlikely to play after his bowling action was reported post the win against Kings XI Punjab. 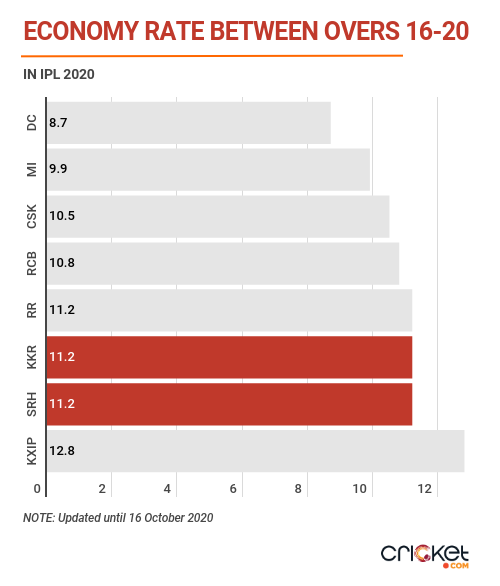 Another huge worry is the form of Andre Russell, especially as a batsman. The 2019 IPL Most Valuable Player (MVP) has had a poor campaign so far, having scored just 83 runs at an average of 11.86. One interesting thing to note is that Russell has struggled in the United Arab Emirates (UAE) in the past as well. In the UAE, the West Indian all-rounder has played 24 T20 innings so far but is yet to register a 50+ score and averages just 11.05 with the bat. Ideally, Narine and Russell would be KKR’s two most valuable players, but with one not playing and the other not performing up to his usual standards, the team’s performances have understandably dropped.

The batting form of Nitish Rana and Dinesh Karthik is also a massive headache for the Kolkata-based franchise. In eight innings this season, Rana has an average of 19.38 and Karthik just 14. Karthik’s poor showings also saw him relinquish the captaincy, with World Cup-winning captain Eoin Morgan now taking charge. If you are a KKR fan, you’d be hoping that this move not only improves KKR’s results but also Karthik’s batting form.

KKR would also want to up their scoring rate. Currently, they’re at the bottom of the table when it comes to batting run-rate in IPL 2020. This could be a result of slow starts at the beginning of the innings. Shubman Gill is one of the finest young batting talents in world cricket, but a strike rate of only 112 during the Powerplay is not ideal, even if he is expected to anchor the innings. He can surely be more aggressive when the fielding restrictions are in place.

Ahead of the weekend matches, Criclytics has given SRH a 30% chance of reaching the playoffs – a loss here and that percentage will drop even lower significantly. On the other hand, KKR know that a host of teams are now hot on their heels when it comes to the playoff spots. Either way, both teams will be desperate for a win as the tournament heads towards its business end.