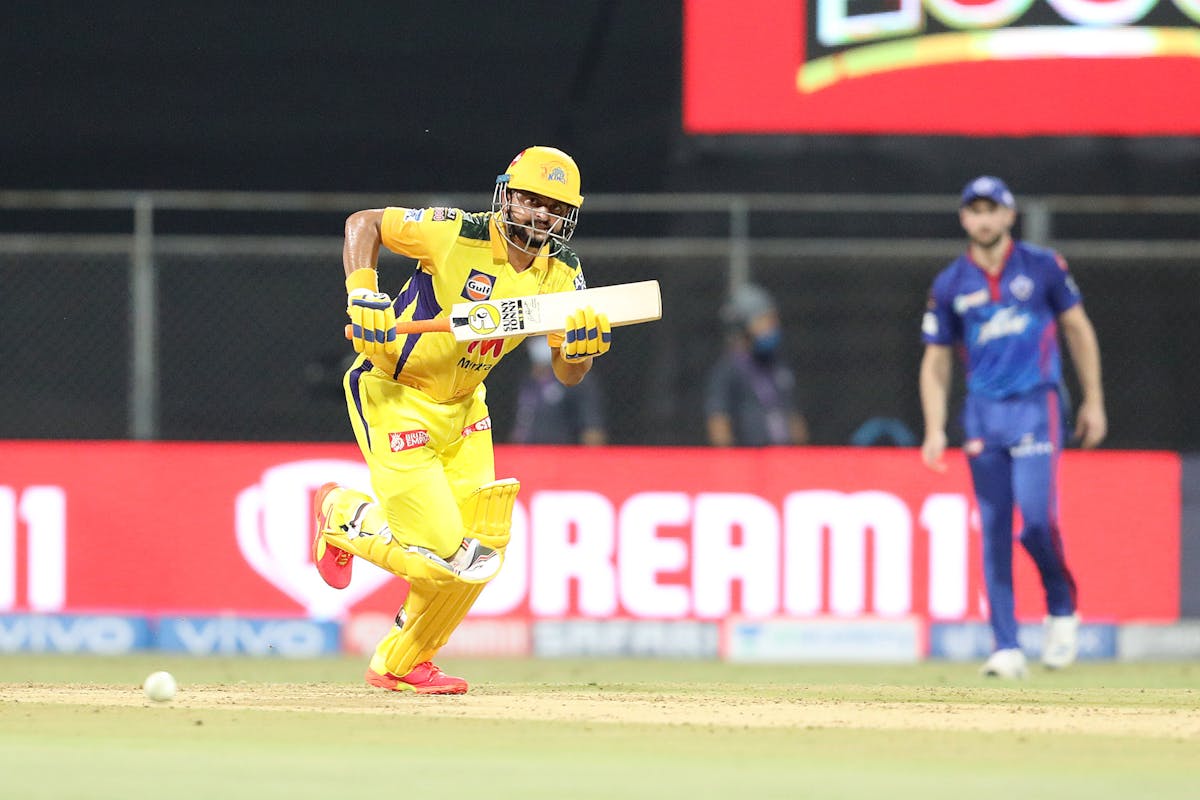 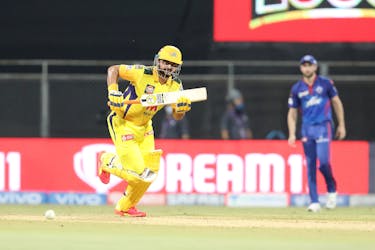 The ultimate team-player, the joy of the team and one Suresh Raina

On the third ball of the eighth over against Rajasthan Royals in the 2021 edition of the Indian Premier League, Suresh Raina went down on his knee and attempted to slog sweep Rahul Tewatia over the deep mid-wicket region.

While the southpaw got the elevation, he failed to get the distance as Shivam Dube completed a regulation catch on the boundary cushion to dent the Super Kings in Abu Dhabi.

And as Raina walked back to the pavilion, who would have thought it would be the last time we would see him don the Yellow jersey. While a string of low scores and an injury curtailed his season, he went unsold in the mega auctions earlier this year, compounding to his woes of finishing on a high.

Eight months after being in the shadow and uncertainty looming over his future in the sport, Raina announced his retirement from all forms of cricket in a social media post.

Despite no longer being a force to reckon in the international arena, Raina enthralled the people with some memorable knocks that will be etched in the memory of every fan.

In the second Qualifier of the 2014 edition, Punjab Kings, formerly known as Kings XI Punjab, locked horns against Chennai Super Kings at the Wankhede Stadium.

After being asked to bat first, Punjab were powered to 226 in the first innings, courtesy of a blistering hundred from Virender Sehwag. A hundred in a knockout game of any tournament is always special, but little did Sehwag imagine that his team would also be on the receiving end of very special innings. 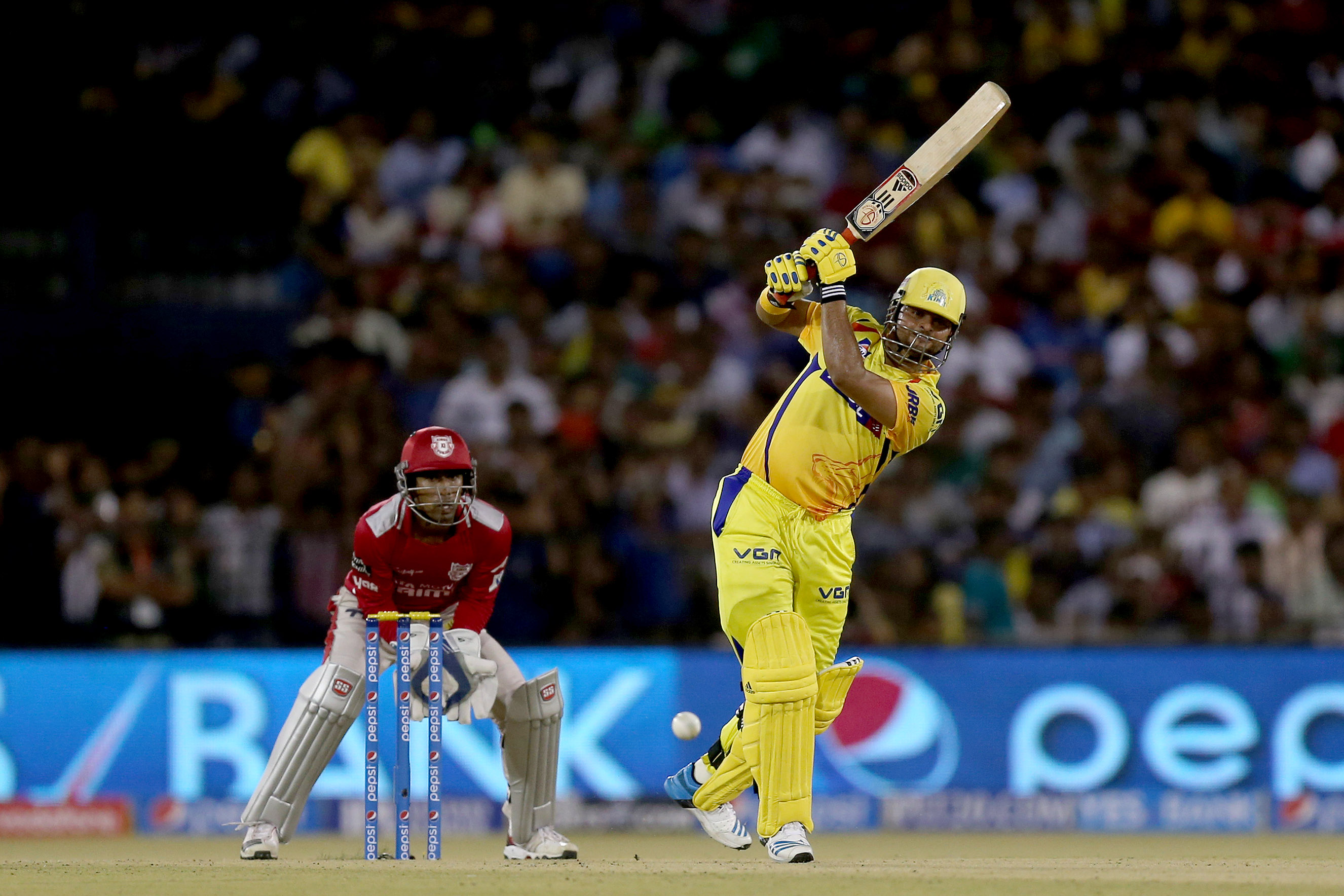 Walking in to bat on the third delivery of the innings with a solitary run on the board and the pressure of the run chase, Raina displayed nerves of steel, taking the attack to the opposition bowling unit.

The southpaw displayed an array of strokes all around the ground to propel Chennai off to a flyer in the field restrictions. He smashed 87 off 25 deliveries and powered the team to 100 runs in the powerplay, ensuring they are well on course with the required run rate.

Despite his valiant effort, Chennai fell agonisingly short in the run chase and bowed out of the tournament.

The second edition of the IPL witnessed the rise of Raina in the shortest format as the left-hander played a vital role in Chennai's campaign. SuperSport Park, Centurion, witnessed one of the most dazzling innings of the league as Raina smashed 98 off 55 deliveries against Rajasthan Royals on a sluggish wicket.

On a night when the batters struggled to score over a stroke rate of 125, Raina single-handedly shouldered the responsibility of Super Kings and smashed ten fours and five sixes at a strike rate of 178.18 and even celebrated a near-century only to be dismissed on 98.

Such was the impact of Raina's innings that despite a modest total on the board, Royals were bundled out for 126 runs, with Raina scalping Rob Quiney's wicket in his two overs.

Over the years, Kolkata Knight Riders have been at the receiving end of Rain's brutal hitting as he averages 48.3, which is the best for him against a team with a minimum of three innings in the IPL.

In the summit clash of the 2014 Champions League T20, Chennai Super Kings were up against Kolkata Knight Riders at the Chinnaswamy stadium in Bengaluru. 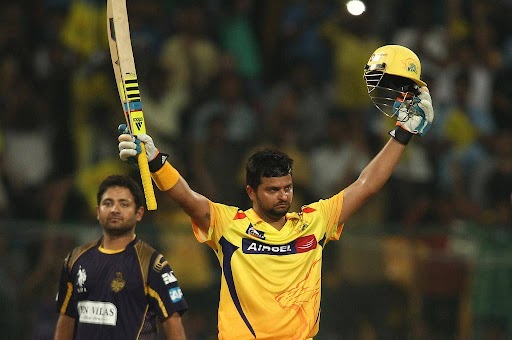 With a target of 181 runs to achieve, Dwayne Smith and Brendon McCullum walked out for the Super Kings. However, they were rattled in the first over as Smith was undone by a slower delivery from Pat Cummins to give the Knight Riders an early wicket.

Coming in at number three, Raina steadied the innings and forged a crucial 126-run stand for the second wicket along with McCullum. With runs flowing in the middle overs and the required run rate well under control, Raina dabbed the ball towards the mid-wicket region to score his maiden hundred of the Champions League and his third overall in the shortest format.

His heroics with the bat ensured Chennai Super Kings lift the coveted trophy and stamped their authority in this format.

In a league match against a quality Proteas bowling unit, Raina walked in at number three in the first over and smashed an unbeaten 101 off 60 deliveries to guide the team to 186 runs in the first innings.

He forged a crucial 88-run stand for the third wicket with Yuvraj Singh that laid the foundation for India's formidable first innings total, which led to an easy win for India.

After not being able to break into the playing XI in the group stages of the World Cup, Raina replaced Yusuf Pathan for the quarterfinals against arch-rivals Australia.

In pursuit of 261 runs, Raina walked in at number seven, with India tottering at 187 for five, needing 74 more runs to keep their hopes alive in the mega event. 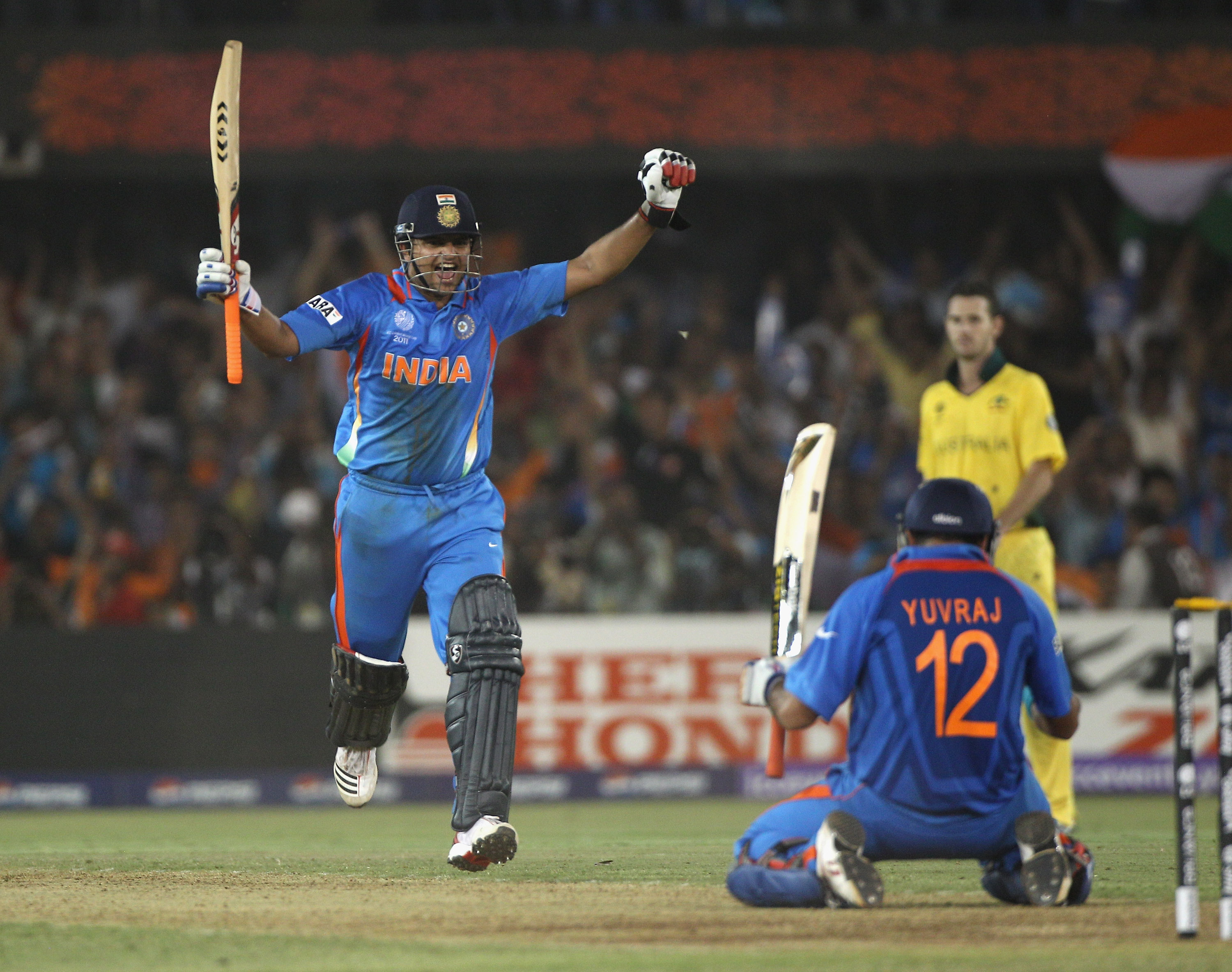 Along with Yuvraj Singh, he accumulated the ones and the twos and smashed the odd delivery for a boundary to ease the pressure of the run chase. While Yuvraj scored a vital half-century, Raina was unbeaten on 34 off 28 deliveries with two boundaries and one six, ensuring India did not face any hiccups in this high-voltage clash.

Raina followed it up with yet another crucial innings in the semi-finals against Pakistan as he anchored the back end of the innings with an unbeaten 36 off 29 balls to help India finish on 260 for nine in fifty overs.

Despite a solid start, India were 187 for five with MS Dhoni and Raina in the middle. However, the Indian skipper was dismissed for a sluggish 25 and the onus to get the team to a decent total relied on Raina. The southpaw held one end up and ensured India were not dismissed cheaply with a 36 that was worth gold for the Men in Blue.

Illness to Yuvraj Singh in the second Test against Sri Lanka resulted in India handing a debut to Raina in Colombo. On the wicket conducive for batting, the left-hander made optimum use of the conditions and scored a century on debut. 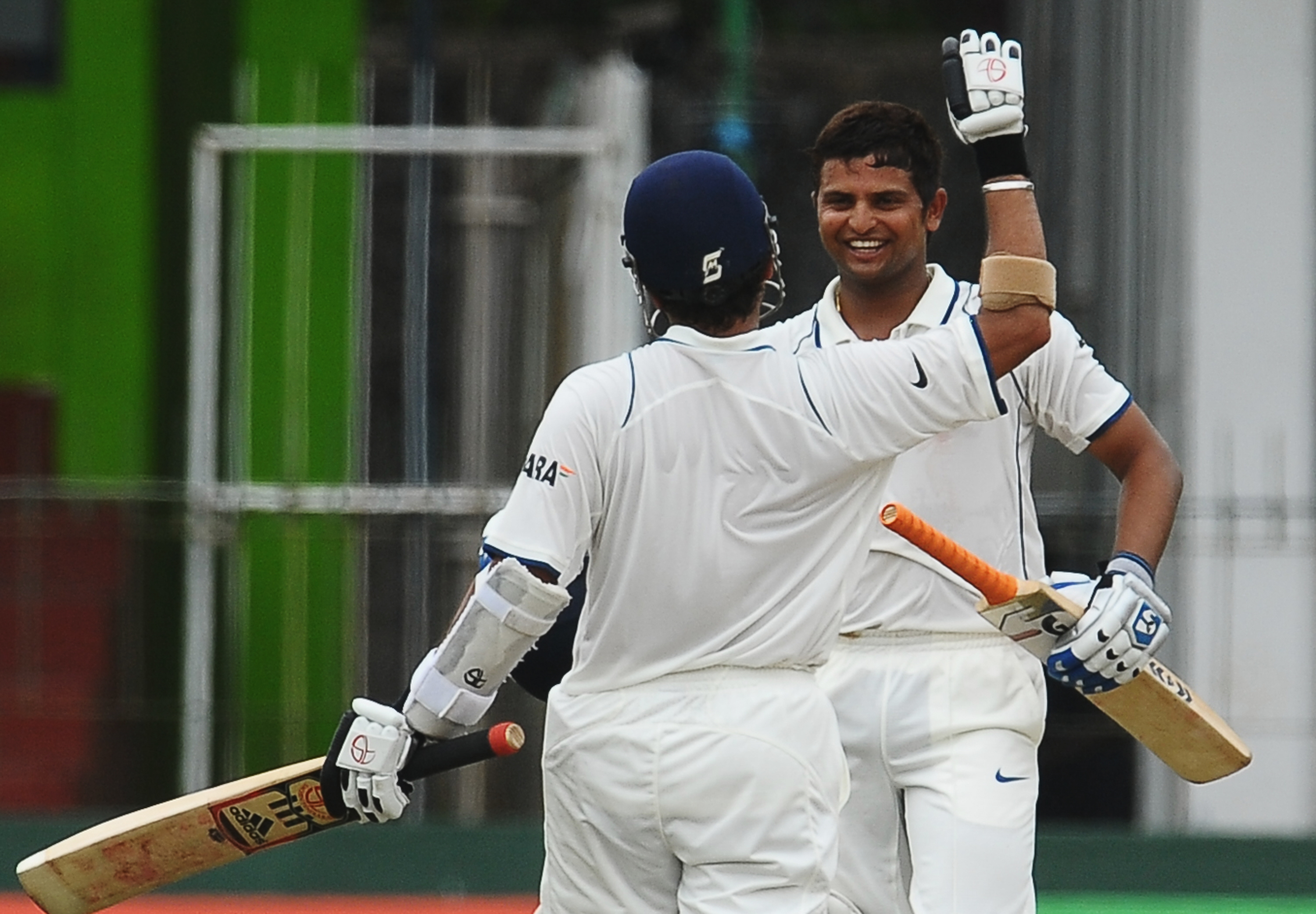 While the match was headlined mainly because of Sachin Tendulkar's double hundred, Raina showcased glimpses of his talent in the longest format with a sublime 120.

However, it wasn't meant to be as this was his only hundred in whites, something the fans desired a lot more, given his exuberant talent and strokeplay.