Suryakumar Yadav is getting his due late but making the best: Hardik Pandya 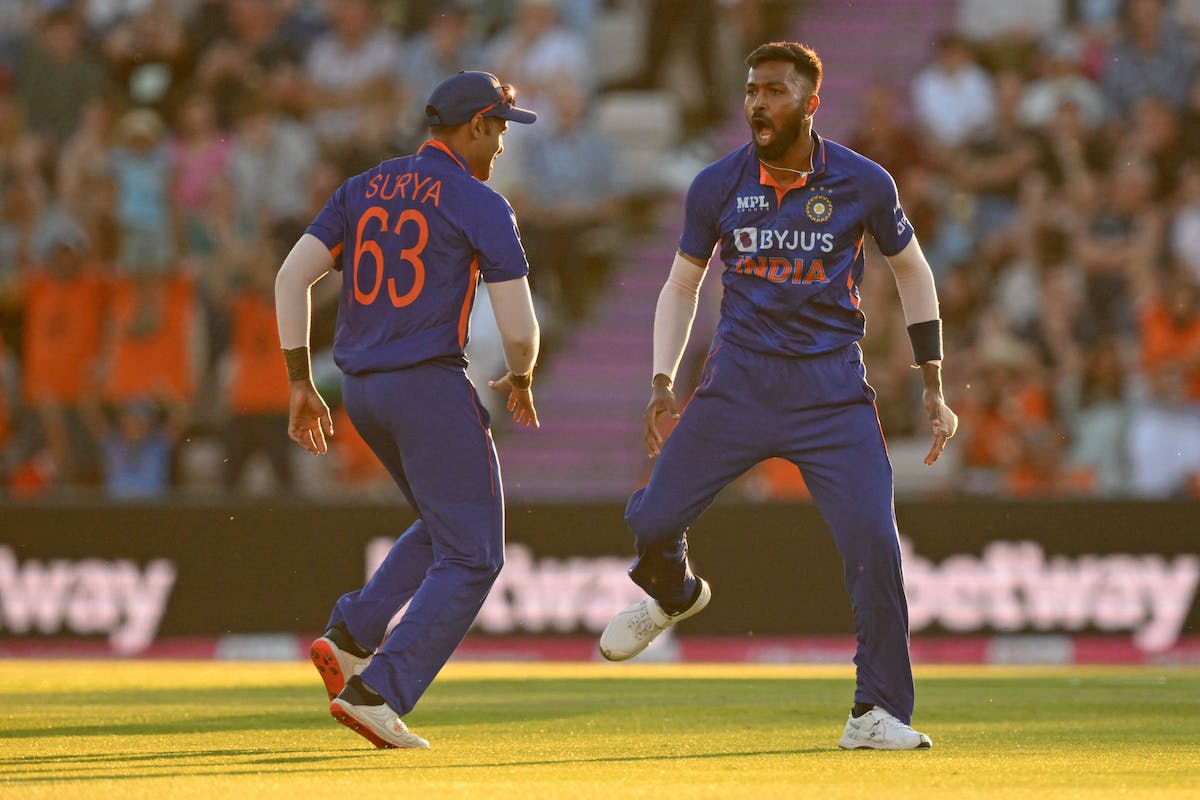 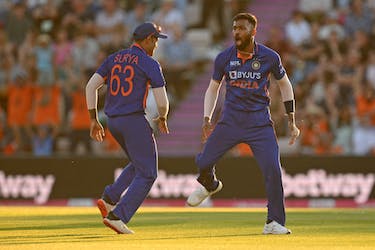 Suryakumar Yadav is getting his due late but making the best: Hardik Pandya

Since making his debut in March last year, the India batter has smashed five fifties and a ton in his 20 T20I innings

Suryakumar Yadav further proved his credentials in the shortest format with a match-winning 44-ball 76 to help India to a convincing seven-wicket victory in the third T20 International (T20I) against West Indies at St Kitts. As a result, India have taken a 2-1 lead in the five-match series.

Appointed vice-captain for the series int the absence of KL Rahul, all-rounder Hardik Pandya says feels Suryakumar is making the best of his chance after waiting in the wings for such a long time.

"Surya is someone who is an exceptional player. When he plays certain shots you are in awe. Today he played some amazing shots. The wicket was not that easy, compared to when we were bowling. A lot of credit goes to him," Pandya said whole addressing the media after the third T20I.

"He has worked hard. He is getting his due late in his life but God is kind to him and he is getting the maximum."

Pandya also credited skipper Rohit Sharma and head coach Rahul Dravid for the change in approach in the third T20I.

About the approach... credit goes to Rohit and coach. Yesterday we were all having a chat - how to go about the wicket? This wicket is slow. Do we still continue the style of play?" Pandya said.

"The credit goes to him [Dravid], he gave us the freedom, and said 'You know what, forget about the result, we are trying something new and we will make mistakes, we're gonna learn from them'.

'What we've been doing for 5-6 years, we are going to get away from that' We gotta make sure we try everything we can and know exactly what are our scoring options when it comes to the T20 World Cup."

Despite going through the highs and lows, Pandya says that the one thing that has not changed is his approach towards the game. He was severely criticised for his performance in the previous T20 World Cup, but with being able to bowl his quota of four overs, he is seen as someone who lends balance to the side.

"The things which I worked on...it's all about following the process, making sure the routine I have set the last six months, I don't change much. Keeping cricket as a priority. A lot of things are looking good as the results are coming my way but it's the approach that I am following," the India all-rounder said.

"I understood in my life that if you enjoy life, be in a frame of mind where you're positive, a lot of time the results go your way. For me, it's not about the result, but how I take the game on, how smart I'm thinking and how I can make sure that I use the condition and the situation that is offering me - something with the bat or ball.

"The last World Cup was different, this World Cup is different, but the process has been the same. Form is at times there sometimes not there. But I have said many times, that I have maintained a balance in life - I will continue to smile regardless of how I perform," Pandya further elaborated.

Pandya now feels that he is no longer a bowler who bowls just to fill in the overs, but is someone who can be used as a third or fourth seamer depending on the situation.

"I've enjoyed bowling. That is why I felt I should take some time off to make sure my bowling comes in. When I bowl it adds a lot of balance to the side, it gives a lot of confidence to the captain. When I used to bowl before, I used to be a filler when someone was not bowling well. But I can proudly say now that I can bowl as a third seamer or a fourth seamer where I can contribute as equally as I do with the bat," Pandya, who became the first Indian to the double of 50 wickets and 500 runs in T20I cricket, said.

Pandya led India for the first time in the T20I series against Ireland and feels that the leadership is a responsibility he enjoys and something that makes him a better cricketer.

Very privileged to get the opportunity to be even vice-captain [on this tour]. With the captain, Rohit gives you a lot of flexibility and a lot of freedom, which is his strength throughout his captaincy stint whenever I've played with him. A lot of credit goes to him and Rahul Dravid for the way they have got the team together, a lot of positive mindset comes in," Pandya explained.

"At the same time, the players are feeling secure, they are not looking over their shoulders. They are getting ample chance and they are being told if they're not playing. Coming to the captaincy bit, I've always enjoyed responsibility and it has added more and more to my game. It has added a little more strength to my game because it makes me think more. When I think more, it just adds more value to my cricket."

The remaining two T20Is between India and West Indies will be played on Saturday (August 6) and Sunday (August 7) at Lauderhill, Florida.