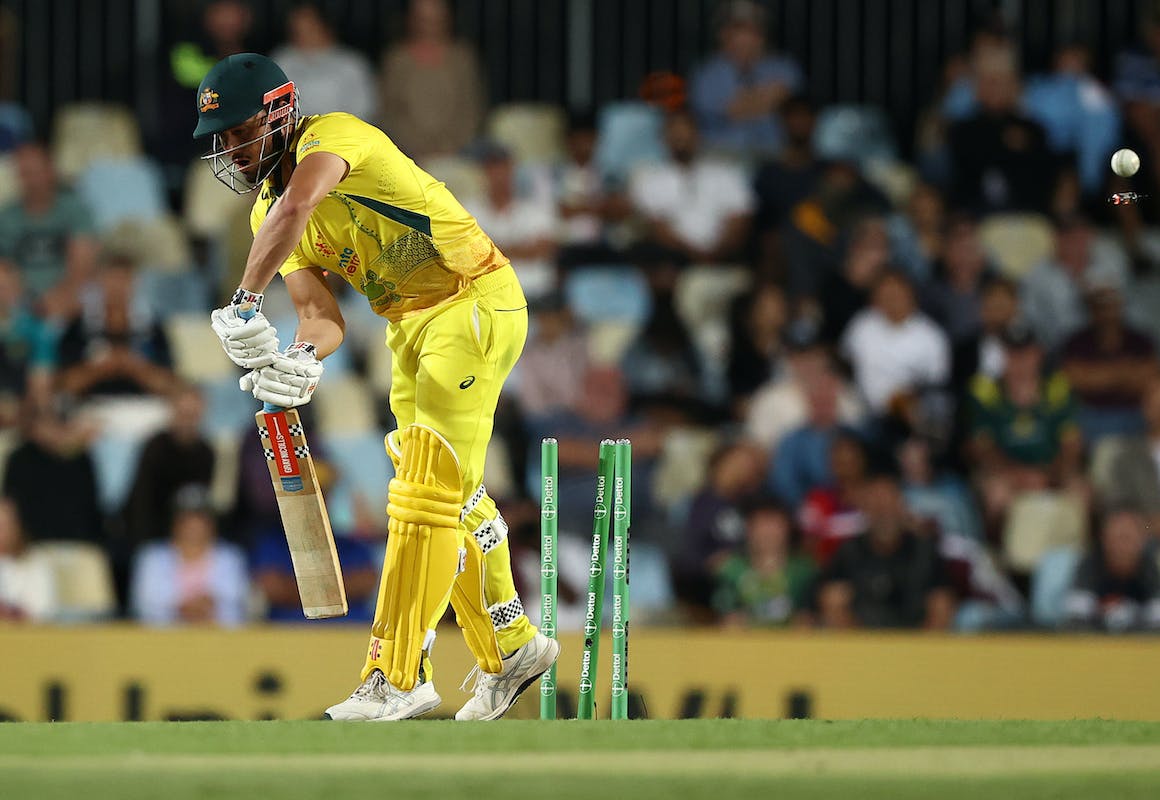 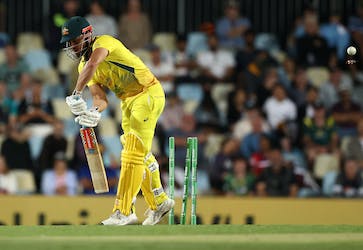 Cameron Green is gunning for Marcus Stoinis’ spot in ODIs 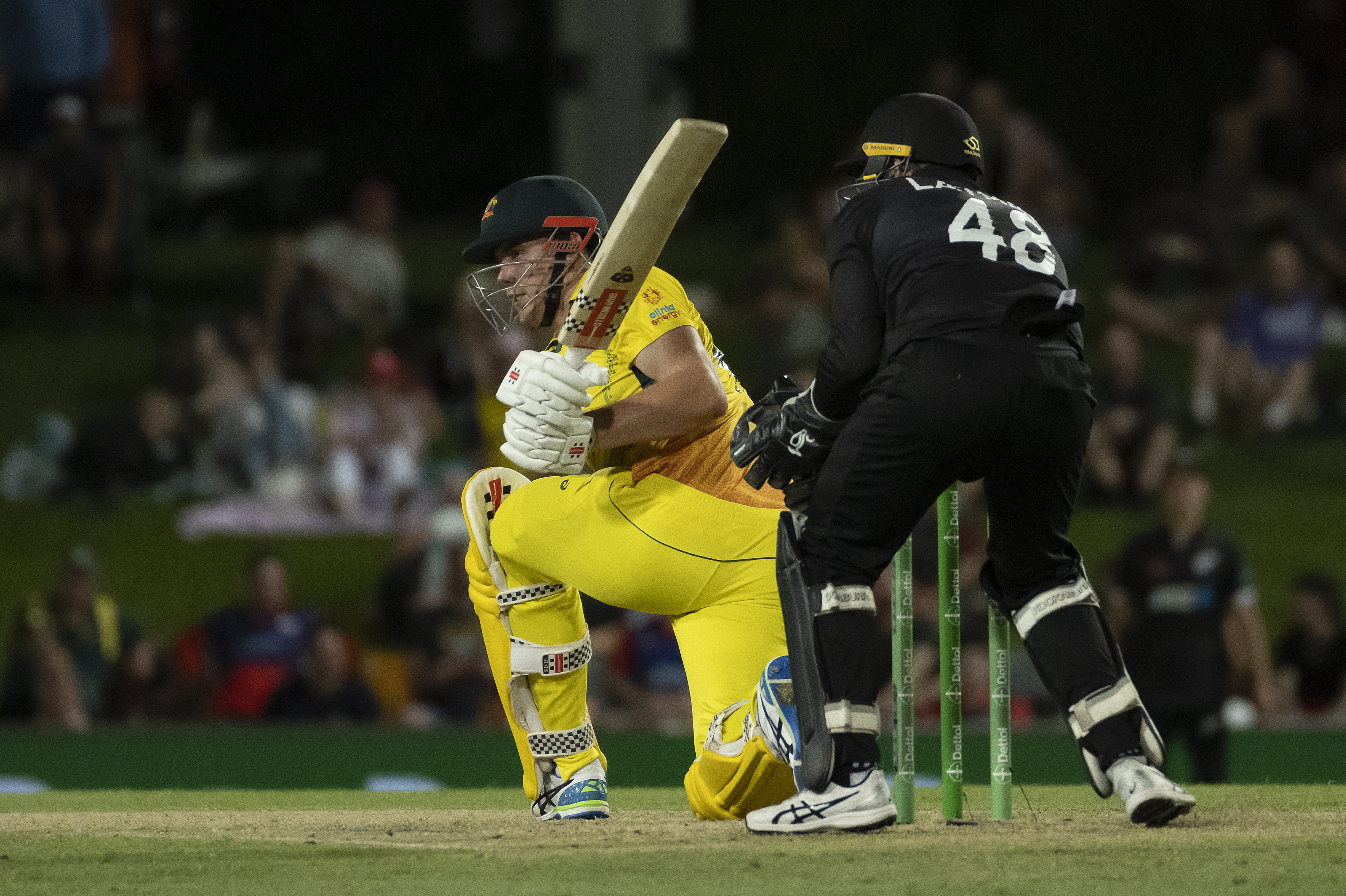 Marcus Stoinis, in many ways, is a lucky man. There was so much scrutiny around Aaron Finch that Stoinis’ failures in the summer completely went unnoticed: 27 runs at an average of 6.75, three single-digit scores in four innings. Such a run could be brushed under the carpet had it been a rare blip, but the truth is that for two years, the all-rounder’s remarkable returns in T20Is — avg 36 and SR 149 — have masked his shortcomings in ODI cricket, where his returns since 2020 have been abysmal: 221 runs at an average of 18.42. 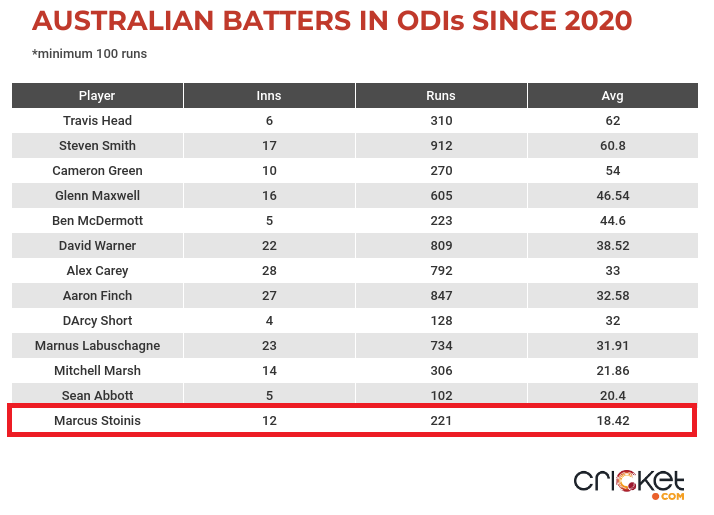 Lack of alternatives have meant that the 33-year-old has been fortunate enough to keep his place in the XI when fit, but that could soon change.

Because Cameron Green is here, ready, and looks nailed-on to take over the No.5 slot in the long run.

For the sake of team balance the Aussies deployed Green at No.7 and below throughout the summer, but the 23-year-old’s coming-of-age knock in the first ODI in Cairns pretty much served as evidence for the fact that he is not only ready for ODIs, but equipped to bat in the Top Five.

Not only did Green play the best knock of his ODI career against a ridiculously strong New Zealand attack, walking in with his side in tatters at 44/5, he achieved something Stoinis has repeatedly failed to do: take the side over the line.

And while in the first ODI he showcased his ability to weather the storm, construct and perfectly pace an innings, the right-hander displayed his aggressive side in the third game, smoking 25 off 12 balls to take Australia to an above-par total.

Green’s perfect outing against the Kiwis has taken his ODI batting average to 54, but why Stoinis should fear for his spot is not only because of the former’s batting, but the fact that he’s a far superior bowler. We’ve seen in Tests just how good a bowler Green is, and now in 12 ODIs the right-armer has already taken 11 wickets, which is a staggering eight more than what Stoinis has managed since 2020.

Green also has an edge over his compatriot owing to the fact that, thanks to his pace, he can slot into the XI even as a third seamer — which would especially be invaluable in subcontinent conditions —something Stoinis cannot do.

The Cam Green era, which has already begun in Tests, looks like it’s about to start in ODIs, and that’s bad news for Stoinis, who, sooner or later, might rightly be relegated to the bench.

Jury still out on Marnus Labuschagne 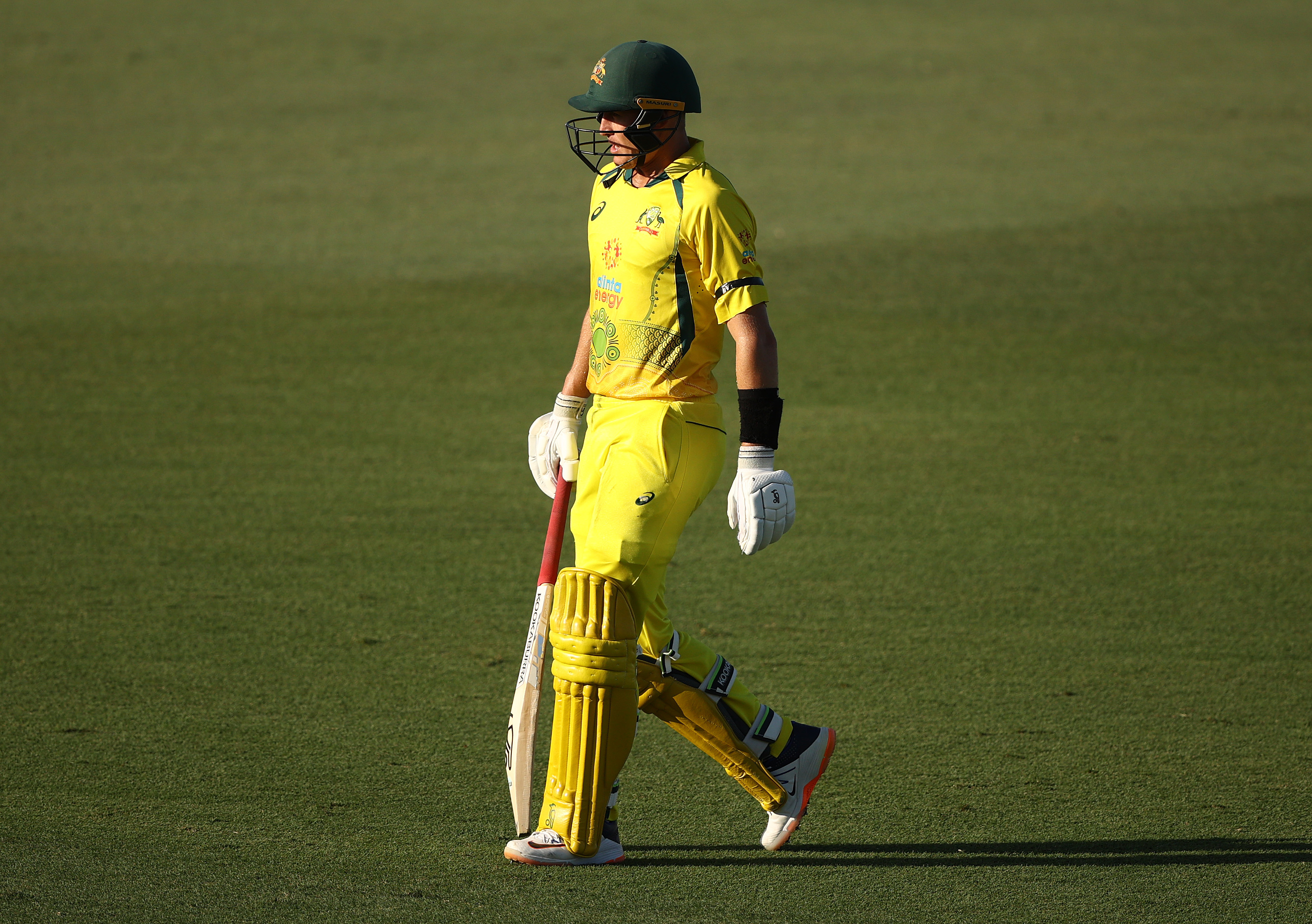 After a rock solid start in the format — 249 runs in first 5 inns @ 49.80, including a ton in South Africa — Marnus Labuschagne dominating 50-over cricket looked inevitable, but two years on, the jury is still out on the 28-year-old.

After 23 matches, Labuschagne’s average reads an underwhelming 31.91, a number which further reduces to 25.23 post the pandemic (17 matches). Despite getting a fixed role at No.4, the Queenslander has struggled for consistency, passing the fifty-run mark just once across his last nine innings in the format.

There have been no discernible patterns about Labuschagne’s dismissals that have been concerning, but what’s been weird is that the 28-year-old has visibly struggled against pace.

Since September 2020, Labuschagne has averaged 24.8 versus the quicks, striking at a mere 74.1. The ‘good length’ is what has troubled him: he’s averaged a mere 13.5 against good-length deliveries from pace in the past two years, striking at 63.8 while being dismissed six times.

Against the Kiwis, all three of Labuschagne’s dismissals came against pace, with him managing just 15 off the 39 balls he faced on a good-length (2 dismissals). 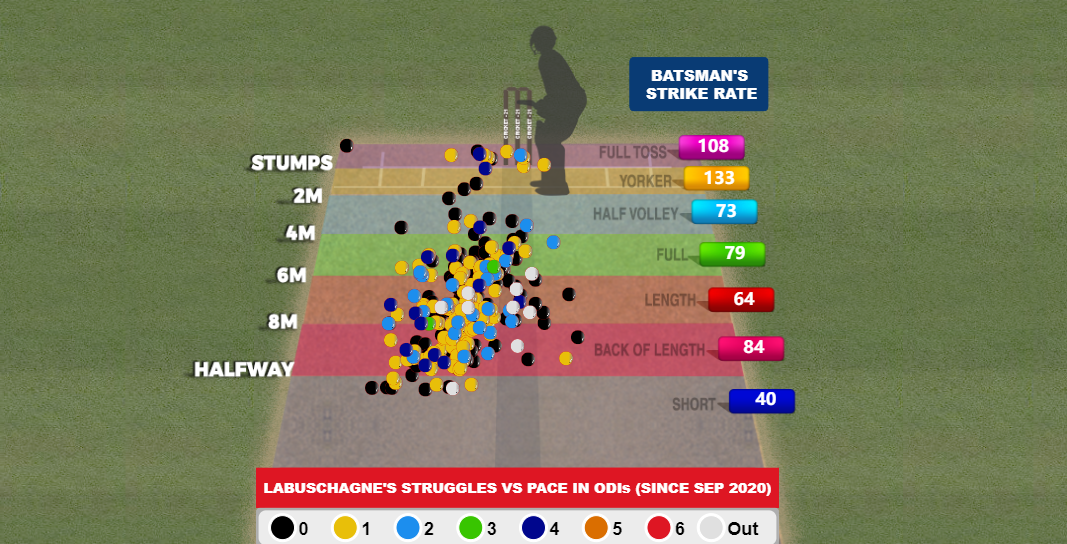 These numbers are ‘weird’ because during this same period, the 28-year-old has averaged 44.6 against pace in Tests — the tougher of the two formats — with this number rising to 48 against good-length deliveries.

Perhaps the above suggests that the issue is not technical; maybe it’s just a ‘mindset’ thing. But whatever it is, Labuschagne needs to get it fixed because he is by no means indispensable. Australia already have a ton of anchors in the XI and there is nothing stopping them from going for a dasher like Mitch Marsh or a wildcard like Josh Inglis — who is known to be a fine player of spin — at No.4. 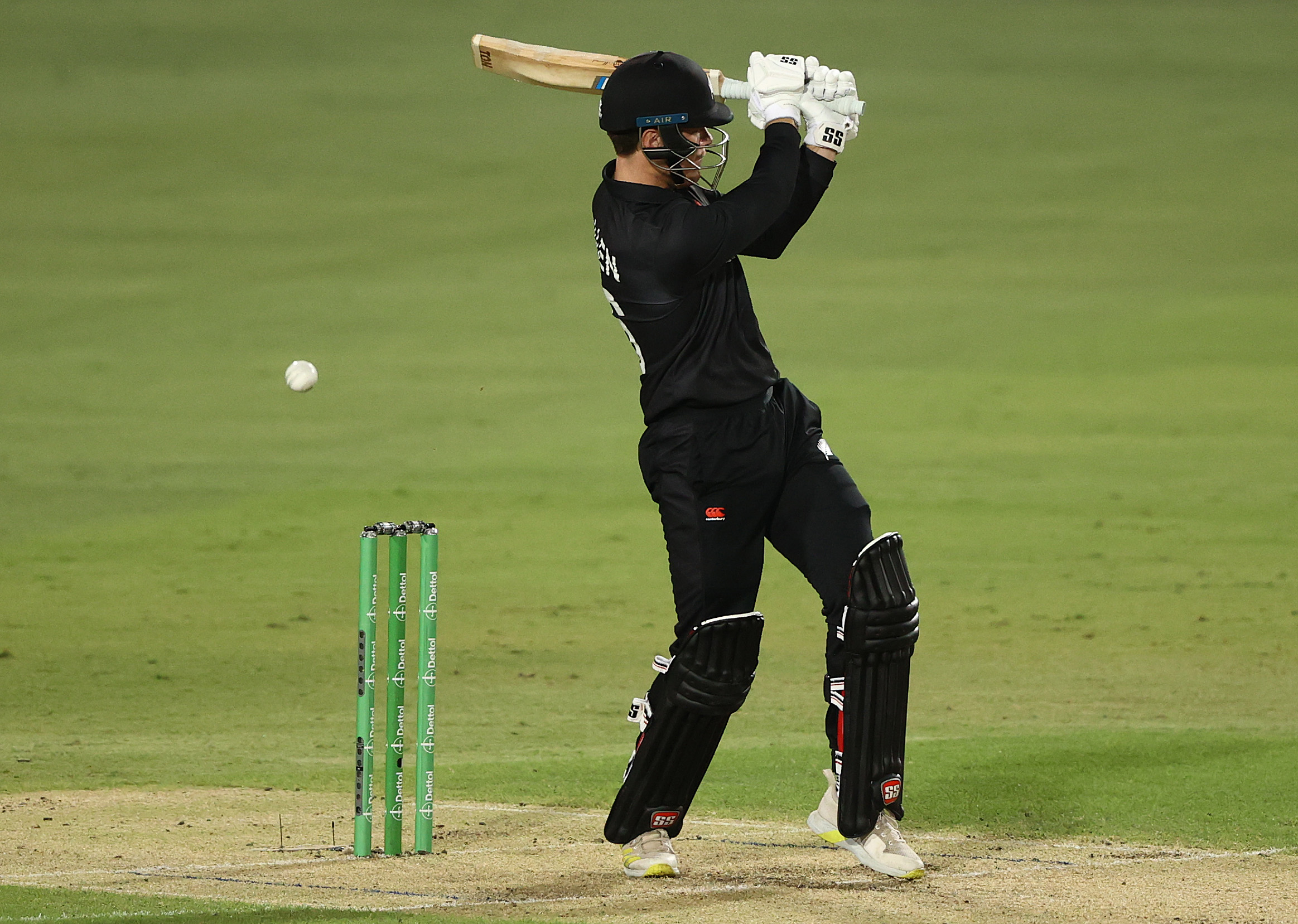 The BlackCaps batted 797 balls across the three ODIs against Australia and only 38 of those deliveries turned out to not be a snoozefest: when Finn Allen was on strike. The opener’s strike rate in the only game he played was 92, which was 23 more than the Kiwi batters’ collective SR of 69.8 in the series.

Jokes apart, however, the Kiwis are in desperate need of a destroyer in the XI. Given the same, it is hard to see how, going forward, they cannot make Allen a permanent part of the starting XI.

Guptill was once that guy. Between 2016 and 2019, he struck at 92.46, going at over 97 in all but one of the years. And he not only had the ability to start quickly at will, but also cash-in and go big on his good days, punishing opponents in Rohit-esque fashion. This was crucial because it took significant pressure off the middle-order and allowed them to get their eye in. They knew that if Guptill was around, the run rate would take care of itself.

But Guptill is no longer the player he once was — since 2021, he averages 22 and strikes at 84 versus Top 10 sides — and the dissipation of his explosiveness has in turn made the Kiwis’ batting a tad one-dimensional.

That the entirety of the middle-order lost its form simultaneously did certainly not help the team’s cause against the Aussies, but it did look like there was no fear factor about the batting unit.

For this very reason, Allen’s inclusion in the XI feels like a must. The wicket-keeper batter will not only bring to the fore so much needed x-factor, he will also, on his good days, provide a cushion to the middle-order thanks to the rate at which he bats. Allen, mind you, has struck at 104.25 in List A cricket — since 2021, this figure reads 139.9 — and has already played a handful of blitzing knocks in his young ODI career.

The challenge for the Kiwis will be fitting Allen into the XI. The youngster took Guptill’s spot in the third ODI in Cairns, but time will only tell whether the Black Caps are ready to move on from the veteran in 50-over cricket. Either way, swapping Allen for Guptill looks like the only practical option, given the rest of the batters are pretty much a lock.