The 2019 World Cup final and tiebreakers in sport 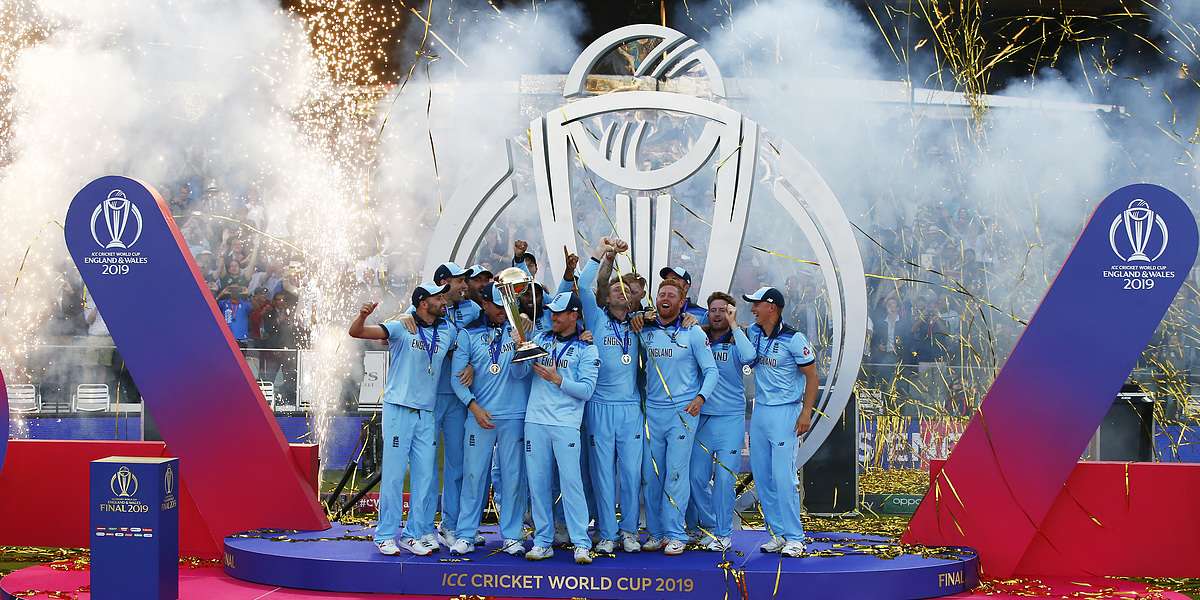 The 2019 World Cup final and tiebreakers in sport

On this day in 2019, England won the ODI World Cup after getting the better of New Zealand via the boundary count back rule

In American sports such as basketball, matches that end as a tie result in overtime to decide a winner. A winner for any contest is a must and, as a result, matches go on until a team has an advantage over the other. In baseball, the same applies—only that extra innings are used.

In sports popularised by the British over the centuries, there was rarely such desideratum. It’s been perfectly acceptable for sporting encounters to end without a winner. But this threw problems in knockout competitions and hence football, for long, had extra time and replays in such instances before later on penalty shootouts were also introduced.

In cricket, for a long time, drawn matches were perfectly fine apart from the time when Timeless Tests were played. Even after a long gruelling series, if there was nothing to separate two teams, it wasn’t seen as a worry at all. It was accepted that the two teams were just equally matched.

After the dawn of One-Day Internationals (ODI), there were going to be knockout matches in cricket as well and, for long, the rules were such that if there was a tie or no-result in a final, the two teams would share the trophy. If there were such results at a prior knockout stage, then the side with the better performances in the previous group stage would go through—Australia famously benefitted from this rule in the 1999 World Cup.

The advent of T20 cricket brought about much excitement and fanfare, and it was decided that in this format, no match—even during a league—should end in a tie. And considering that ties in 20-over cricket are way likelier than the other two formats, this made sense.

Initially, the Bowl Out was used as the tie-breaker. But it was far from ideal as it tested only one skill of the game i.e bowling. Soon, a decision was made to introduce a Super Over—a one over per team showdown with the batting side having two wickets to play with. This wasn’t restricted to T20 matches alone though, it was to be used in ODI knockout matches as well.

Over the last decade, we’ve witnessed a few Super Overs, but none more significant than the one between England and New Zealand in the 2019 ODI World Cup final.

The two teams had endured contrasting experiences during the 2015 World Cup. While New Zealand reached their first final in the tournament’s history, England had to face the embarrassment of getting knocked out in the group stages.

Four years on, England in white-ball cricket had gone through an almighty reform. Entering the 2019 World Cup, the hosts were considered as the favourites—a tag they would live up to—after a fine run in ODIs over recent years. Adelaide 2015 was a thing of the past for this England squad.

On the other hand, New Zealand weren’t as eye-catching as they were in 2015, but they were an efficient unit and made their way to the final on the back of some solid results. 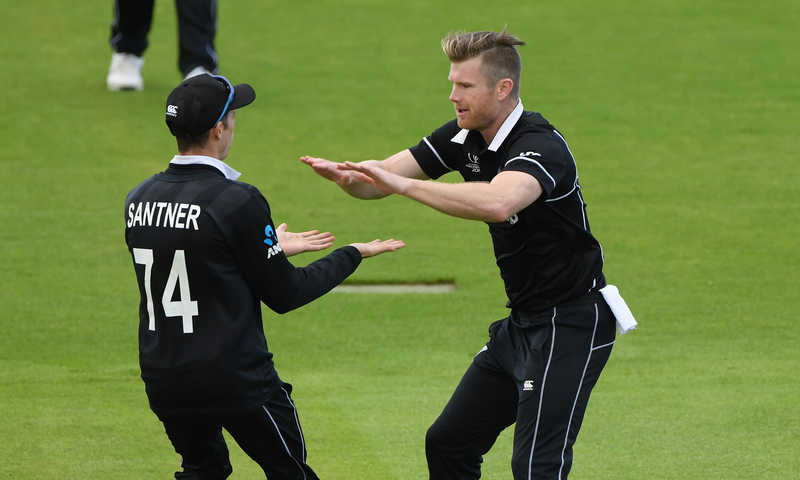 Although the recent tendency in white-ball cricket has been to chase, in big matches, many teams still prefer to put runs on the board first. And New Zealand took that route at Lord’s as captain Kane Williamson elected to bat after winning the toss.

At one stage with Williamson, one of the top batsmen during the World Cup, and Henry Nicholls at the crease, it seemed that the Blackcaps were set for a big total. But this track wasn’t as flat as some of the other pitches that had been seen during the tournament.

In a team full of batting superstars, England pacer Liam Plunkett often went under the radar despite some fine performances in ODI cricket. Bowling the middle overs can be unglamorous, especially for a fast bowler, but Plunkett made crucial contributions for England during this period of the innings time and again.

In the final, the Middlesbrough-born cricketer dismissed both of New Zealand’s set batsmen to bring England right back in the contest. From there on, the England bowlers never let New Zealand fly away and restricted them to 241/8 in their 50 overs.

While Plunkett and Chris Woakes took three wickets each, the other bowlers—Jofra Archer, Mark Wood and Adil Rashid—also did a fine job.

For the Blackcaps, a number of batsmen got starts but weren’t able to kick on and get a big score. Only Nicholls crossed the fifty-run mark while Tom Latham scored 47.

With the batting that England possessed, you would have fancied them to chase down a target of 242, especially considering the ease with which they had taken Australia’s bowling to the cleaners a few days earlier. But then again, this pitch had something in it for the bowlers and it was a final, so there was always going to be additional pressure.

Just as they had done throughout the entire tournament, the New Zealand pacers bowled exquisitely once again. England were reduced to 86/4 with their top four batsmen all back in the pavilion. While Jason Roy and Jonny Bairstow reached double figures, both didn’t bat nearly as fluently as they did against Australia during the semi-final.

Jos Buttler and Ben Stokes then resurrected the innings with a sublime 110-run partnership. The former, especially, played a crucial hand at this time. While Stokes was taking time to build his innings, Buttler made sure that the required run-rate didn’t go out of hand.

Much like Plunkett for England, Lockie Ferguson had been brilliant for New Zealand during the middle overs. Here, while he took the big wicket of Bairstow during that period of the innings, he put the Kiwis on the front foot with the dismissals of Buttler and Woakes later on, in the 45th and 47th overs respectively.

While New Zealand kept chipping away with wickets, Stokes was still at the crease and with him, there was always hope for the home side. He was lucky to receive a reprieve while Trent Boult, one of the safest fielders in world cricket, accidentally stepped on the boundary rope while taking a catch.

It came down to Stokes versus Boult in the final over. With 15 runs needed, New Zealand got off to the perfect start with two dot balls. But Stokes wasn’t giving up easily as he launched the next delivery for a six over midwicket. Nine runs needed off three balls, anybody’s game.

Then came one of the most remarkable moments in cricketing history. Stokes, while diving into the crease to complete a second run, accidentally deflected the ball which went on to reach the boundary. Six runs were awarded as the batsmen had run two and four more via the most fortunate overthrow for England. It was later deemed to be an umpiring error as only five runs were supposed to be awarded because the throw was made before both batsmen had crossed each other during the second run. But such was New Zealand’s ill luck. 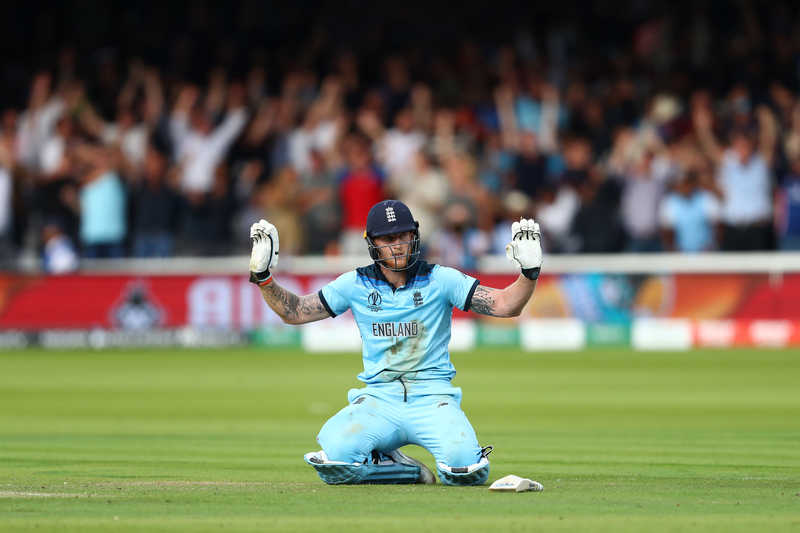 With three runs required off two deliveries, you’d have banked on England to win. There were still more twists though as Stokes could manage only one run each of the final two balls, each resulting in the non-striker getting run-out while attempting to complete a second run. Boult had done superbly on both occasions to execute the dismissals.

Hence, the match was tied and for the first time in the history of ODIs, there’d be a Super Over.

England would bat first and it was no surprise that they sent their best batsmen on the day—Stokes and Buttler. Up against Boult, the duo managed 15 runs which was a formidable score given the situation.

After 46 days, the tournament would finally be decided with a contest between the duo of James Neesham and Martin Guptill with the bat and Archer with the ball. The England fast bowler erred with his line off the first delivery by very little but that was enough for the umpire to call it a wide. 13 runs followed from Neesham’s bat off the next five deliveries.

The situation was down to two runs needed off one ball with Guptill taking strike. If the Super Over ended as a tie as well, England would be crowned world champions having scored more boundaries during the match. And that’s exactly what happened with Guptill getting run-out at the striker’s end while attempting a second run.

The match was tied. The Super Over was tied. England, though, had hit more boundaries and were world champions. 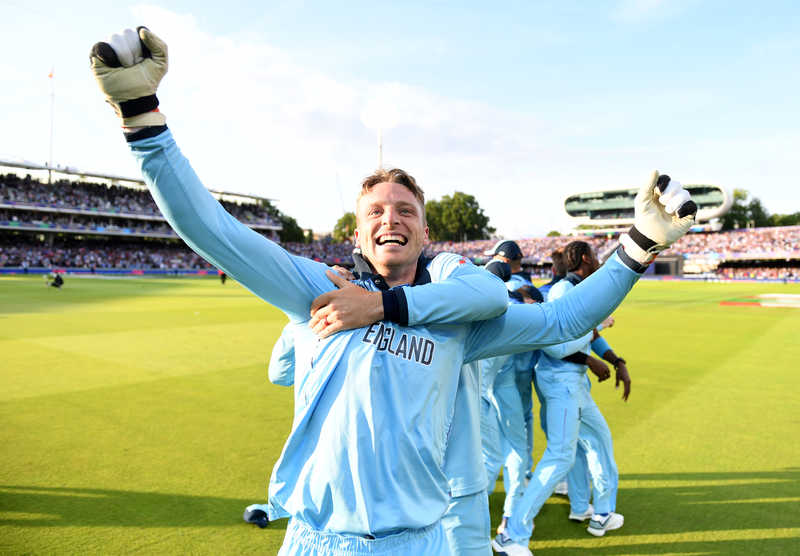 The spotlight was soon on the boundary count back rule and the impact it had on such an immense game. Was it a fair rule? Should the trophy have been shared, like it would have been under the old rules? Should another Super Over have been played?

Later in the year, the ICC made amends to the controversial rule. Now, if a Super Over in a knockout match is tied, then another Super Over is to be played to determine a winner. And this continues until one team has scored more runs than the other.

This new rule has a bit of influence from American sports as well as association football. While, like in the former, play will go on until we have a clear winner, this will be applied only in knockout matches in ODIs much like the latter.