The curious case of Mohammed Shami in T20s 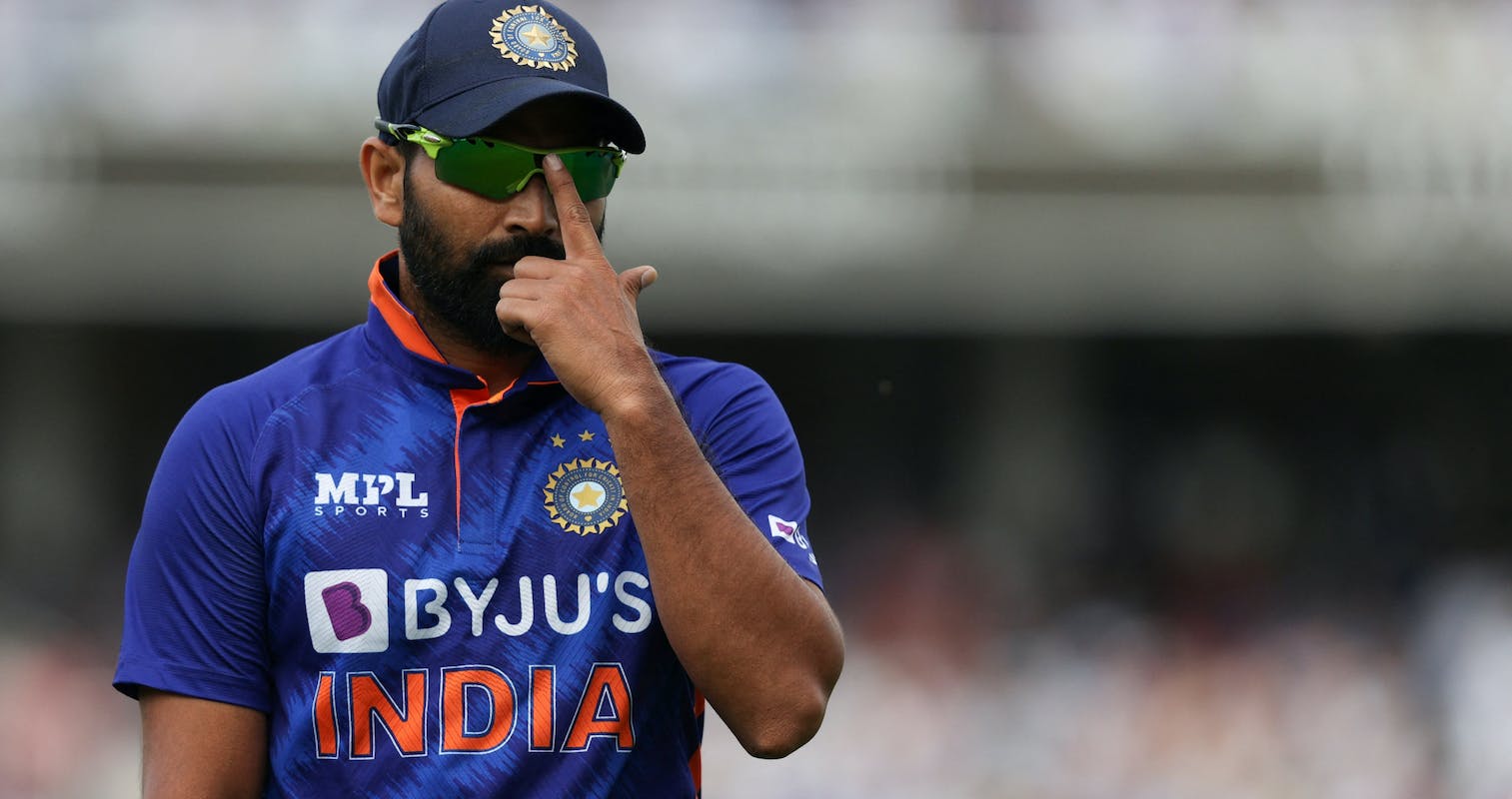 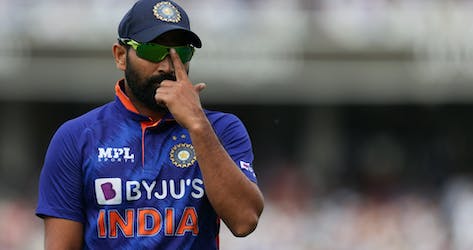 The curious case of Mohammed Shami in T20s

In a detailed breakdown, we project Shami’s strengths, weaknesses and explain why the management have thus far opted to not have the 32-year-old in their T20WC plans

If you had a nickel for every time Mohammed Shami waltzed his way into the Indian squad in T20 cricket right ahead of a World Cup, you’d have two nickels. Which is not a lot, but it sure damn is weird that it happened twice.

So, the question now is: is a third nickel on the way?

Ravi Shastri is ‘baffled’ that Shami isn’t a part of India’s T20 World Cup plans. Brett Lee wants the veteran to board the flight to Australia, as do a good chunk of Indian fans. Or at least they did prior to Bhuvneshwar Kumar’s five-fer against Afghanistan on Thursday (being reactionary is how we roll).

What we’re here to explore is if there’s actual merit in picking Shami for the T20 World Cup. We’ll project his strengths, weaknesses and also try to make sense of why the management have thus far opted to not have the 32-year-old in their World Cup plans.

When you picture Shami the bowler, you’re instantly reminded of wreckage with the new ball. On his day, when on song, Shami the bowler is unstoppable regardless of the format. With that perfect seam position of his, the 32-year-old has the ability to run through sides and wreak havoc whenever there is lateral movement on offer.

This automatically makes the prospect of him taking the new ball for India mouth-watering, and in IPL 2022, the 32-year-old showed there is every reason why he needs to be in the reckoning for the T20WC.

No bowler in IPL 2022 took more powerplay wickets than Shami (11) and the veteran did so while maintaining a remarkable ER of 6.6. In the entire competition, only Prasidh Krishna (10 wickets @ ER 6.6) matched Shami’s prowess in the first six overs. 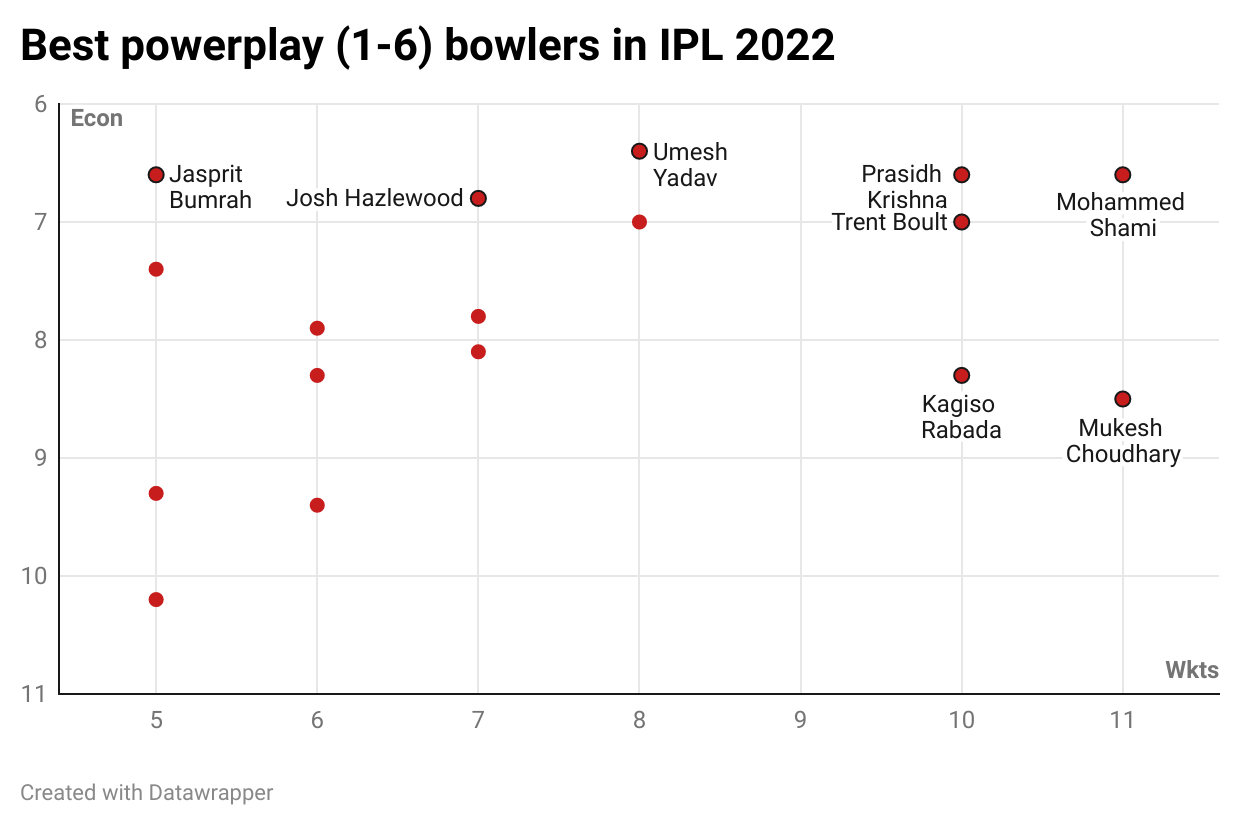 On three separate occasions Shami took 2 or more wickets inside the first six, the highlight being his mesmerizing spell against Lucknow in the Titans’ first match in the competition where he blew away the LSG top-order — comprising Rahul, de Kock and Manish Pandey — inside three overs.

Additionally, in 37.5% (6/16) of the games he played, the right-armer maintained an economy under 6.00 in the powerplay, with Gujarat going on to win five of those matches.

From this, we can interpret that Shami is reallllyyyy  good at setting up matches for his side with the new ball. Little wonder that there’s genuine curiosity as to why he’s not played a single T20I since the T20WC last year, even after his exploits in IPL 2022.

And it’s not just been IPL 2022 where he’s shone with the new ball.

This pretty much establishes that Shami is as potent a new-ball T20 bowler as there is in world cricket right now.

He does, however, have his shortcomings. And it’s pretty significant.

Shami’s woes at the back end: a one-phase bowler?

Shami has a good yorker in him and he has his moments at the death. Him defending six runs in the Super Over against Mumbai in Dubai two years ago — in the double Super Over contest — is right up there as one of the best death overs bowled in recent times.

However, he has far more bad days than good ones. And historically, barring the odd moment, the right-armer has been a liability at the death.

In the entire world, among bowlers who have bowled at least as many overs as him in the said period, only Andre Russell, Ben Laughlin, Daniel Sams and Jason Holder have been more expensive. 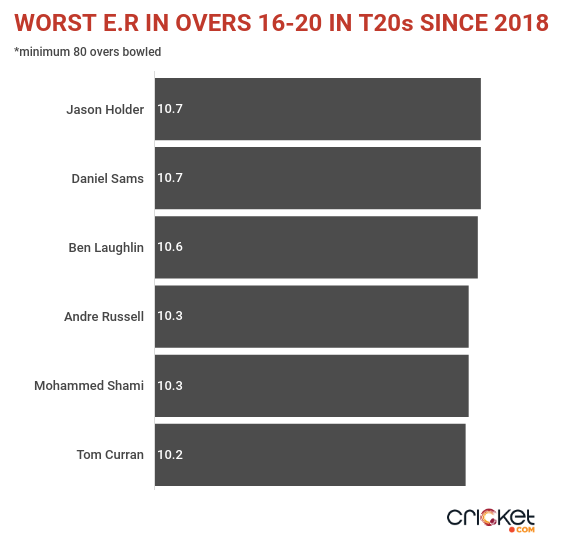 India, too, know just how bad Shami can be at the death, when he’s not on the money. In his T20I career, the 32-year-old has maintained an ER of 10.7. The last time he donned the Indian shirt in the shortest format, Namibia took 25 runs off the 2 overs he bowled in the 16-20 phase.

It is not uncommon for new-ball behemoths to be dodgy at the death, but Shami’s unremarkable record in the middle-overs (7-15) pretty much relegates him to being a single-phase bowler.

As good as he was with the new-ball in IPL 2022, Shami conceded at an ER of 10.1 in overs 7-15 in the competition, picking a solitary wicket in the phase. A very small sample size, but among bowlers who bowled 7 or more overs in the middle phase in IPL 2022, only Tymal Mills (11.9) and Odean Smith (12.4) proved to be more expensive. 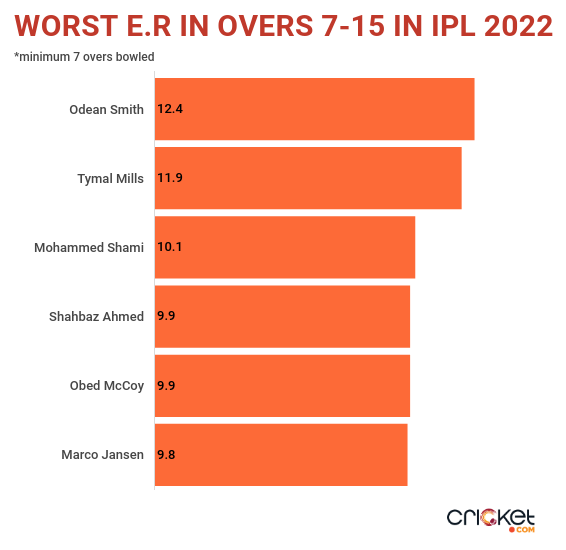 Once again, the small sample size is very small, but no Indian bowler has bowled as many overs as him in the middle phase and has proven to be more expensive. Ever.

Shami not in India’s plans: what could be the reason? 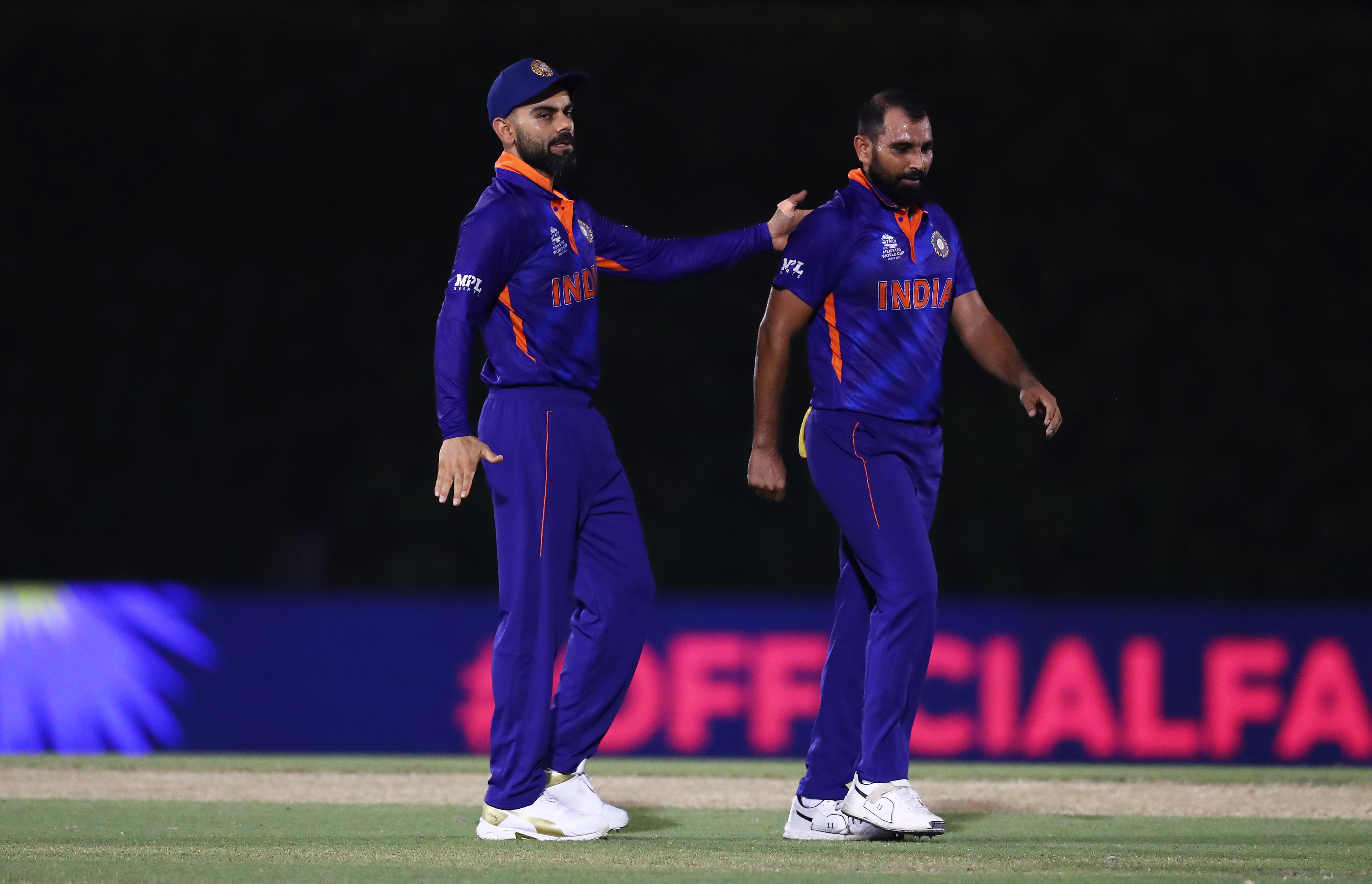 Although Shami has visibly poor numbers in both the middle and death phases of the game, his record by no means warrants getting frozen completely out of the T20 set-up. Especially after the kind of IPL 2022 he had, where he bowled the Titans to the title, one can argue that Shami, if utilized properly, can be a weapon of destruction.

So what, then, could be the reason for his alienation?

‘Workload management’ is one of the reasons being thrown around online but when you’re gunning for a World Cup, you’ll surely integrate the individual back into the set-up a month or two ahead, especially when there is no other cricket on the horizon. So we definitely can rule this reason out; the management are not ‘resting’ or ‘preserving’ Shami.

The most logical explanation is that, given Shami is not an all-phase bowler (like Bumrah or Arshdeep), the management just don’t see him ahead of Bhuvneshwar Kumar and Deepak Chahar in the pecking order, the two individuals he’s competing with for a place in the squad to take the new ball.

And in a way, that’s justified. We all know just how good both Bhuvneshwar and Chahar are up front, but the pair have been significantly better than Shami at the back end of matches.

Bhuvneshwar bowled two poor penultimate overs in the Asia Cup but his ER of 9.2 at the death in T20s since 2020 is still a significant upgrade on the Titans' pacer. In his last 22 T20Is, in fact, Bhuvneshwar has an economy of 8.6 in overs 16-20.

Chahar, meanwhile, has been a revelation at the back end of matches in the last two years, his ER reading 8.7. He’s also taken 10 wickets in the phase at an average of 19.4.

Numbers wise, Shami might be as potent as Chahar with the new ball — if not more — but the latter is simply a more complete bowler. Needless to mention, Chahar is essentially a bowling all-rounder, his batting being light-years ahead of Shami in the shortest format. Given the overall package, there is little reason for the management to prefer Shami over Chahar.

Given just how good Bhuvneshwar has been since the last T20WC too, there is no reason whatsoever for the management to swap him for Shami, who either way is a far inferior bowler outside the first six.

‘Why Avesh and not Shami’ is another question that’s been raised but it’s entirely possible that the management leaned towards the former owing to seeing him as an all-phase prospect. Avesh has had a rough introduction to T20Is, but his showing across the last two IPL seasons suggests that he’s earned his spot.

All these justifications, of course, will mean for nothing if India do end up naming Shami in the T20WC squad, making it twice in two years (and thrice overall) where they’ve used him as a World Cup specialist. But looking at how the build-up has been, it is safe to assume that the Bengal speedster, come the 15th, will be absent from the list.

In that case, we can say that Shami is simply the right man at the wrong time.