The overs that swung the pendulum towards Ireland 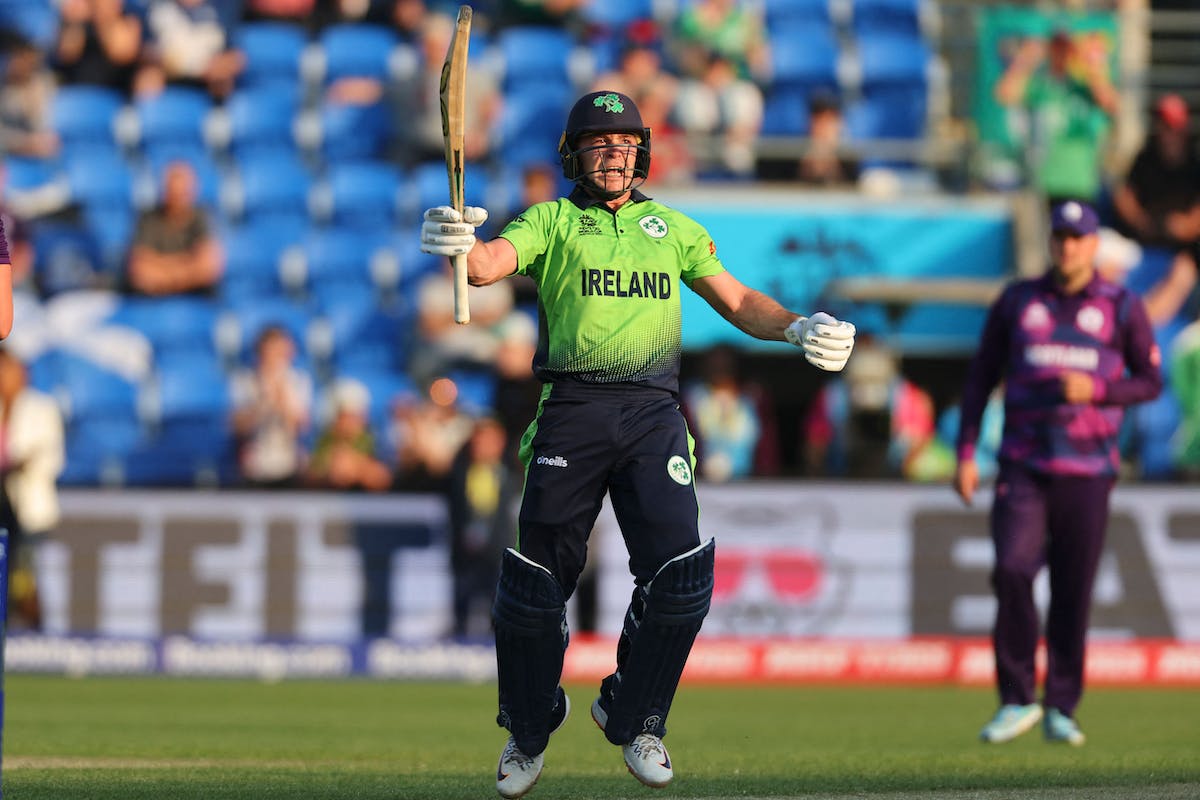 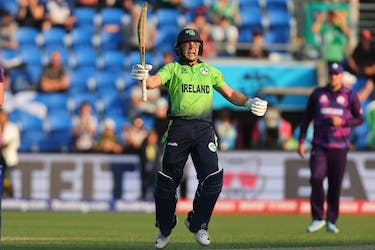 The overs that swung the pendulum towards Ireland

We are only a couple of days into the T20 World Cup Qualifiers, and it is fair to say the seven matches played thus far have provided the fans with some riveting games that have gone down to the wire.

While there have been some massive upsets in the first week of the extravaganza, there have also been stories of teams being done and dusted in the game and staging a comeback.

There is a reason why cricket, and especially T20 cricket, is called the game of absolute uncertainties. And in the first game of the day on Wednesday, Scotland were at the receiving end of a very special knock from Ireland's one-of-a-kind player, Curtis Campher.

The 23-year highlighted the last edition of the World Cup with his four wickets in an over heroics against the Netherlands that propelled the world of cricket to stand and applaud his skills at the highest level.

On Wednesday, he was yet again making the noises for all the right reasons, but this time around, with the bat in hand as he single-handedly kept the Irish flag flying high in a must-win clash.

Coming in at number five with the team struggling for momentum in a 177-run chase, Campher started his innings steadily by accumulating the ones and the twos before launching a scathing attack on Scotland's lacklustre bowling unit.

The right-handed batter smashed an unbeaten 72 off 32 deliveries, studded with seven boundaries and two massive sixes to power the team over the finish line with an over to spare.

While his heroics helped Ireland get points on the table and record their highest run chase in the history of the T20 World Cup, we take a look at some of the critical moments in the run chase of this high-voltage clash that changed the complexion of the game. 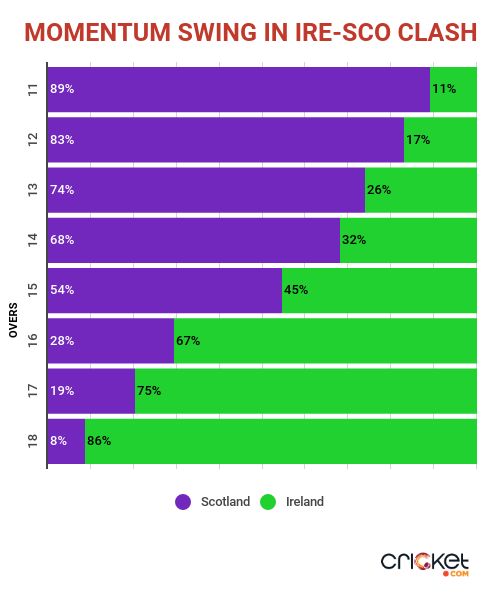 In a formidable run chase, Paul Stirling and Andy Balbirnie, Ireland's dependable opening combination, needed to make optimum use of the powerplay to get the team off to a flyer.

With only nine runs in the first two overs, the duo picked a couple of singles to start the over before the skipper executed a perfect square drive for a boundary to give some impetus to the innings.

His batting partner, Stirling, used the field restrictions to cover his stumps and pull a short of length delivery outside off-stump for a boundary over square leg to end the over by amassing 11 runs.

While the win percentage for Scotland was 70 percent at the start of the over, the duo's twin boundaries titled the favour in Ireland by 10 percent.

Ireland were in dire need of their openers to take the attack to the Scotland bowling unit after scoring two boundaries in the last over. However, they were jolted on the second delivery as Balbirnie guided a short delivery straight to point to give Scotland their first wicket of the innings. 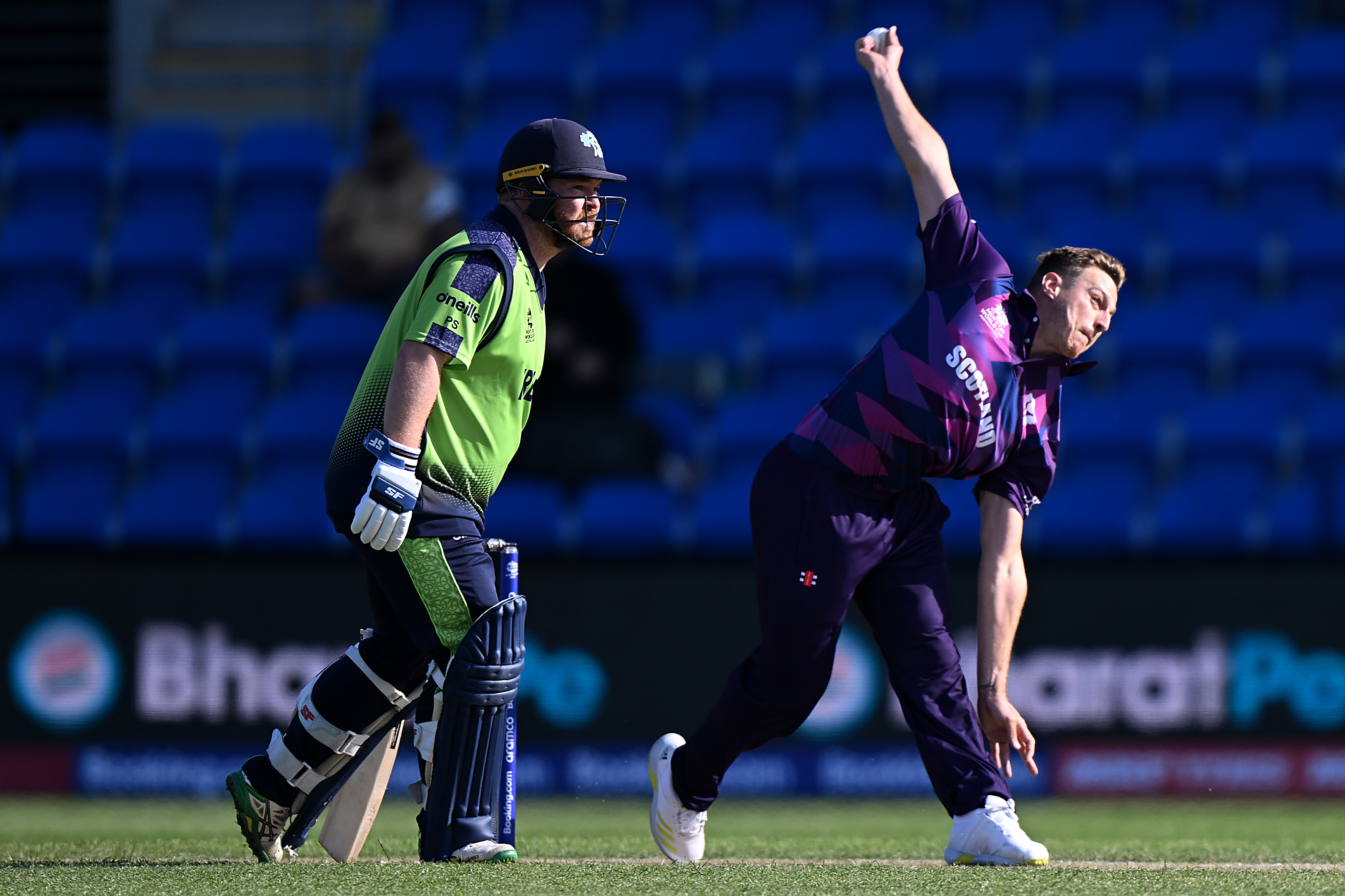 Lorcan Tucker, who walked in after the loss of the skipper, struggled to get his timing on the remaining four deliveries, leading to Ireland managing to score only three runs off the over.

The Irish outfit were rocked in the fifth over as they lost Stirling cheaply and were reeling at 61/4 in 9.3 overs when George Dockrell joined hands with Campher to steady the innings. 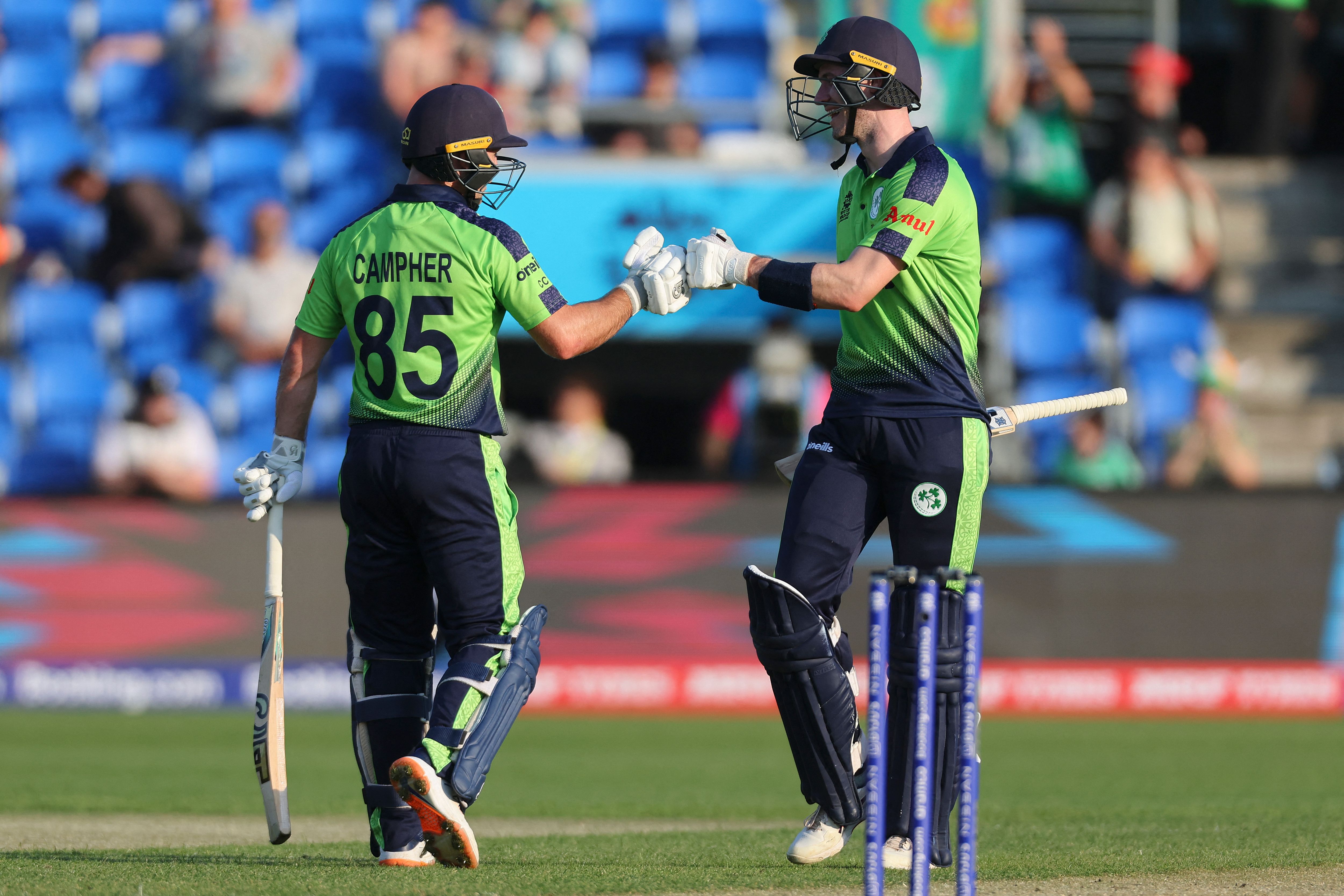 The duo kept the scoreboard ticking and managed to punish the bad deliveries in their 64-run stand until the 15th over, where the game shifted in favour of Ireland.

While the partnership kept Ireland in the hunt, Campher smashed the second delivery of Brad Wheal for a massive six over deep mid-wicket to give the fans a glimmer of hope. Dockrell, at the other end, lofted a short delivery over covers for a boundary to score 14 runs off the over.

We were down to the final five overs of the run chase, with Ireland needing 52 runs to record a famous win on Australian shores. After a couple of runs of the first delivery, Dockrell took the attack to Josh Davey and smashed him for a couple of boundaries over his head to tilt the game in favour of Ireland.

On the final ball of the over, Campher slashed a wide delivery to the right of backward point for yet another four to amass 17 runs, to get the equation down to 35 off the last four overs.

With the game going all the way down to the wire, Ireland's hopes were pinned on Campher, who was unbeaten on 49 off 24 deliveries. The all-rounder not only got to his half-century on the first delivery but also managed to use the larger boundaries on offer and run hard between the wickets.

He followed it up with a boundary straight behind the bowler to end the over and get Ireland on the cusp of a famous win.