Timing of Siraj's white-ball resurgence a boon for India 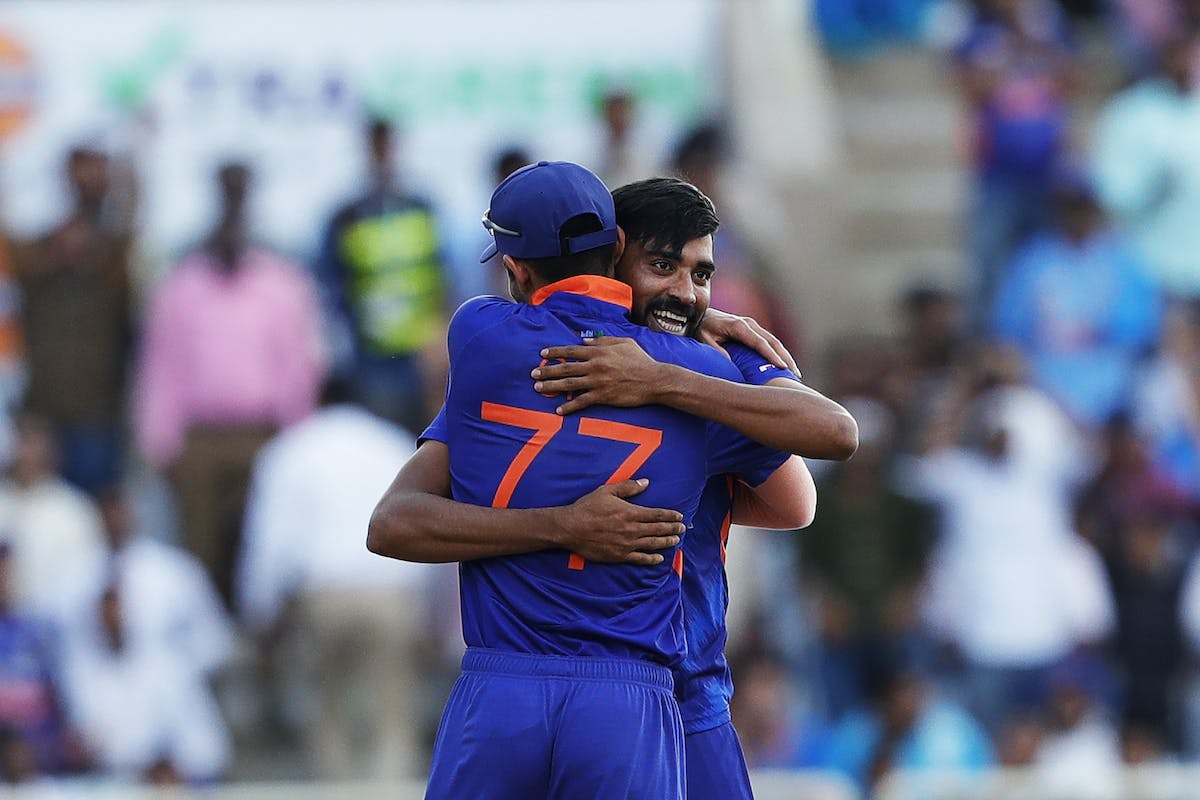 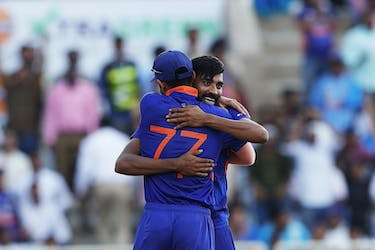 Timing of Siraj's white-ball resurgence a boon for India

In the absence of Jasprit Bumrah, India will need new heroes in the T20 World Cup

Can hit the hard length? Check

Has played in Australia? Check

No, we are not talking about Jasprit Bumrah. He is out for a few months. The bowler who seems to be on road to fulfill the above mentioned checklist is surprisingly, Mohammed Siraj.

The list is quite complex. Almost akin to a wishlist for the Indian team which is trying to find a replacement for Bumrah before the World Cup. Siraj is nowhere close to the bar Bumrah has set. Not many bowlers are but the Hyderabad seamer has provided a glimmer of hope that the Men in Blue won’t be taking a complete shot in the darkness while naming a replacement.

Siraj is a surprising frontrunner amidst all options. Simply because at the start of this year, he was not in India’s white-ball plans. There is enough evidence to mention it despite no verbal confirmation.

The right-arm seamer made his international debut in the T20 format in 2017. By the end of 2021, he had played only four T20Is. His ODI career was also limited to a solitary cap (in 2019) at the start of this year. In the meantime, he had played 11 Tests, despite his debut coming in late 2020. His natural tendency to hit the hard lengths, angling the ball into the right-handers underlined him as an asset for red-ball cricket. It was clear that the team reserved him for the same.

What brought him back to the white-ball setup this year was the forthcoming T20 World Cup. India wanted to rest their best white-ball players and fulfill their commitments at the same time. As a stop-gap arrangement, Siraj was summoned for the ODI series against West Indies earlier this year.

Siraj has grasped these sporadic chances. He did decently in his comeback series to the white-ball formats. It was followed with a horror of an IPL season but since then, Siraj has re-emerged to show his white-ball mettle.

He had the best economy rate among pacers on both sides during the three ODIs in West Indies - 5.1 runs per over. 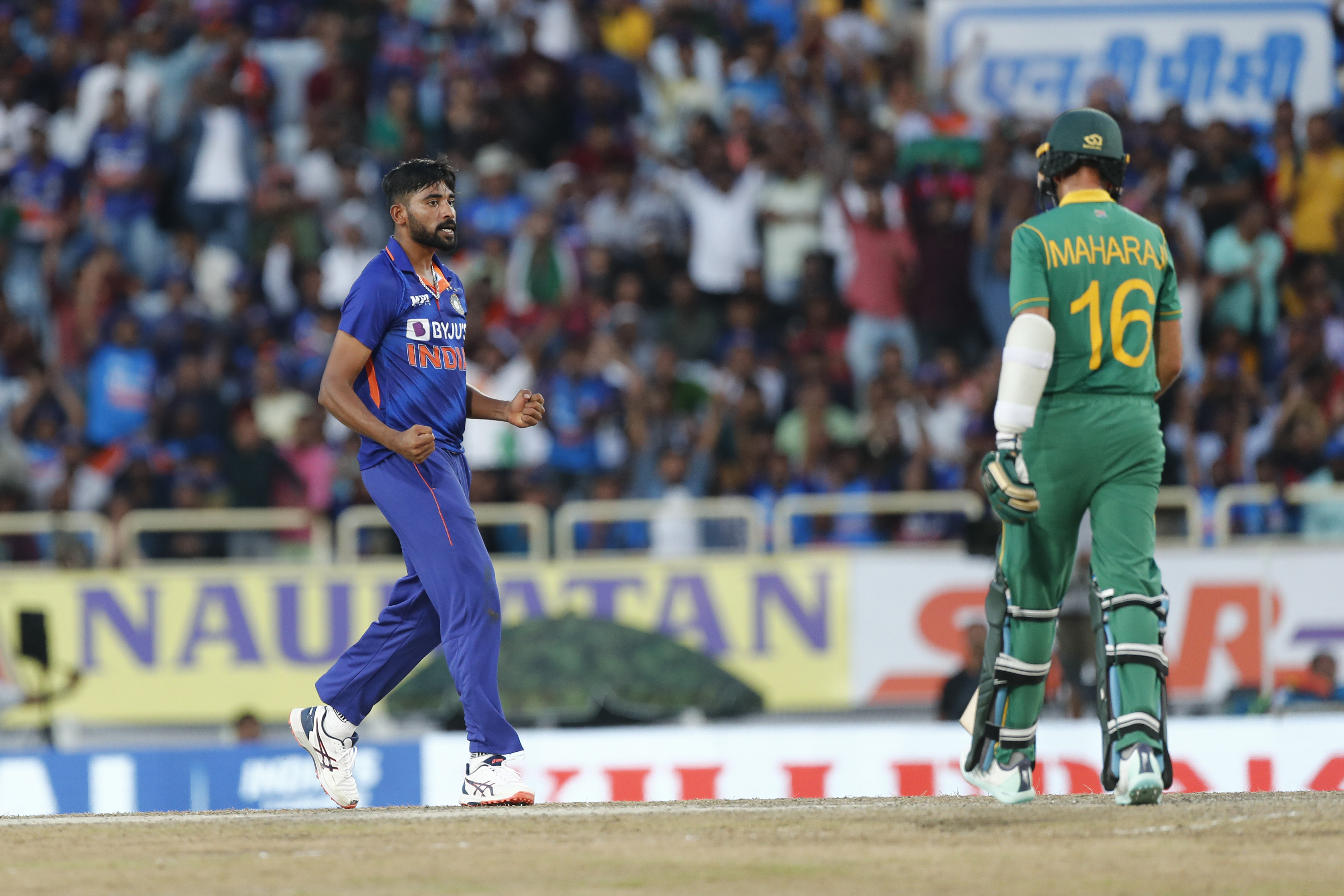 From Port of Spain to Ranchi, Siraj has consistently maintained decent figures if not anything making the headlines. Often the difference between the two is the wickets column. He has consistently ceased the opposition’s flow of runs without picking wickets in heaps. In Ranchi, he snapped 3/38 in 10 overs but it slips under the radar after the blitz from the batters.

Again, it was his economy that helped India more. Despite Siraj striking early with the wicket of Quinton de Kock and breaking a prospering partnership with Reeza Hendricks’ scalp, the Proteas looked set to breach the 300-run mark. Siraj, in his last three overs, conceded only 7 runs (plus 4 byes which was totally his fault) to halt the visitors to 277.

In 11 ODIs this year, he has delivered nine overs in the last five overs of the innings. His economy is under run a ball - 5.9. What has led to this transformation?

The 28-year-old has shown a great appetite for bowling yorkers. 22.2% of his deliveries have landed in the yorker zone in the aforementioned nine overs. Another 13% have been full tosses but the economy of those deliveries has been only 6.9. When his yorkers are a bit too full, he is still tough to hit. 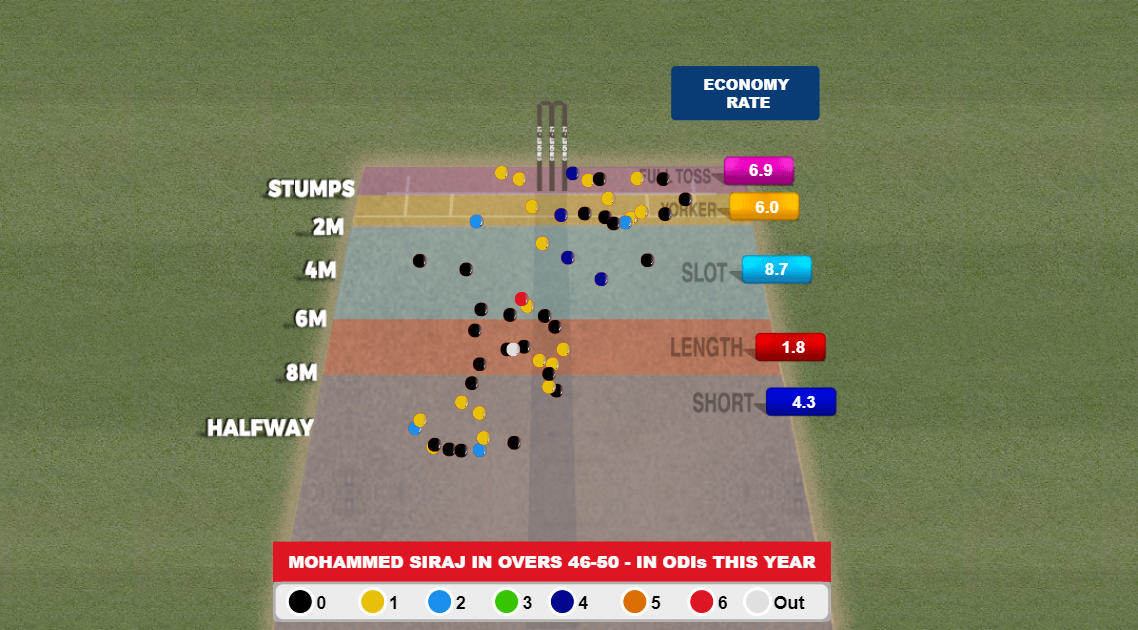 His 17th over in the Indore T20I nearly a week ago was one of the best death overs by an Indian pacer. In a match where the average run-rate was 10.6, he allowed only 8, delivering one immaculate yorker after the other. Overall, only 19 runs in his two overs at the death gave Indian bowlers some respite on a night of mayhem. 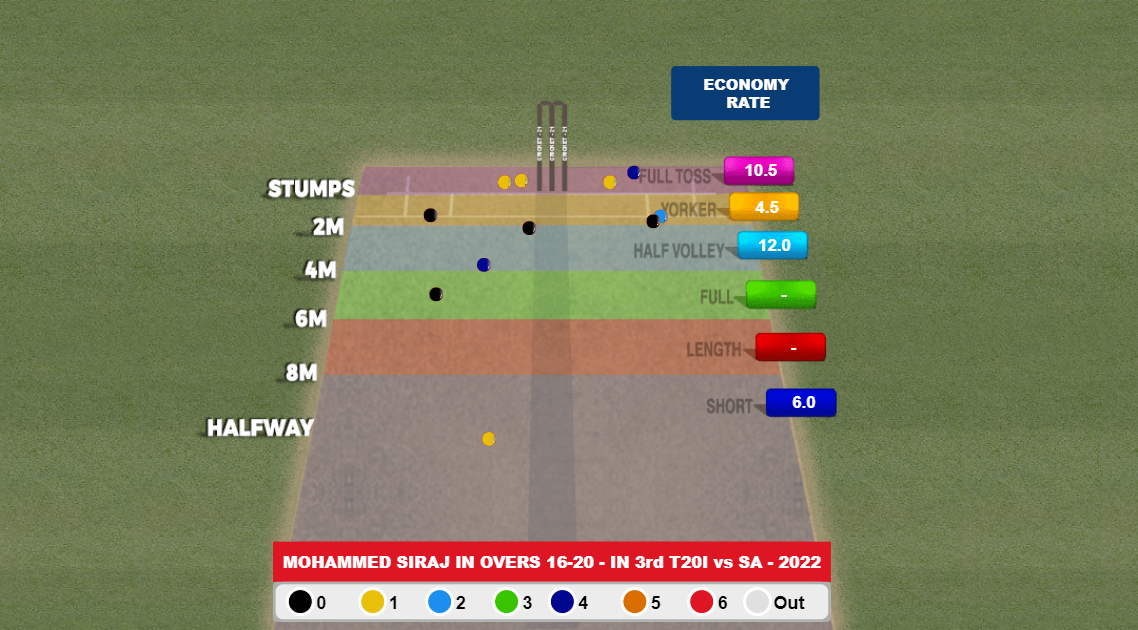 What makes Siraj the lead contender to replace Bumrah is his pace. In ODIs this year, he has the third highest percentage of 140 kph+ deliveries, after Mohammad Shami (19.4%) and Bumrah (16.5%)*.

Siraj’s closest competitors for the spot are Deepak Chahar and Shami. Chahar’s batting is a big up but he doesn’t hold any pace, alongside his fitness issues. Shami, on the other hand, isn’t reliable at the death. Add to it, Siraj’s innate ability to hit the hard length adds variety to India’s otherwise one-dimensional pace attack.

The timing of Siraj’s late resurgence is a boon for India. The Men in Blue need someone who can bowl at pace and mitigate the damage as well. Siraj’s sample size is small but currently, there is no clear candidate that fits the bill. And if not experience, the seamer will be carrying his form into the World Cup.

Not to forget, Australia is where he began his Test career and instantly created an impact. Another trip Down Under could well unfold the next chapter of Miyan’s journey. India need new heroes after all.

*stat based on data available