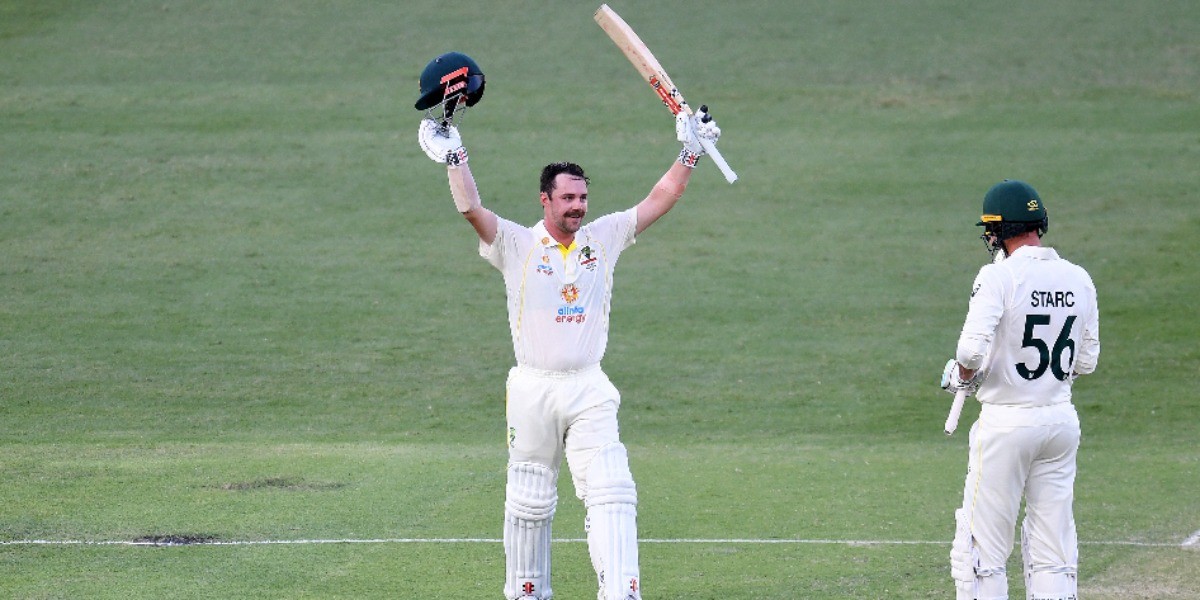 A riveting day of Test match cricket enthralled a near-capacity crowd at the Gabba as the home team produced a scintillating batting performance to gain absolute control of the first game.

Over the years, the fortress of the Australian outfit is known to produce some of the best performances that are etched in the memory of every cricket fan. And, the second day of the Test was no different as Travis Head carved his name in the record books by smashing the third-fastest century in the history of Ashes rivalry.

Earlier in the day, David Warner and Marnus Labuschagne notched up half-centuries to lay a steady foundation for the second wicket with a solid 156-run partnership after an early departure of Marcus Harris.

However, the formidable batting unit of the Australian side crumbled and slumped from 166/1 to 195/5 to give England a glimmer of hope of making a comeback in this game. While Labuschagne was undone by the extra bounce off left-arm spinner, Jack Leach for 74, Warner was outfoxed by a slower delivery from Ollie Robinson for a scratchy 94.

Despite a flurry of wickets, Head continued to take the attack of the England bowling unit and helped the home team gain a 196-run lead heading into day three. Here are some of the notable stats from the game.

An innings to remember for Head

Days before the commencement of the Ashes, there were questions marks revolving around the selection of Travis Head in the first encounter. Well, these doubts can now be put to rest as the southpaw smashed the third-fastest century in this oldest rivalry off 85 deliveries to rewrite the record books. 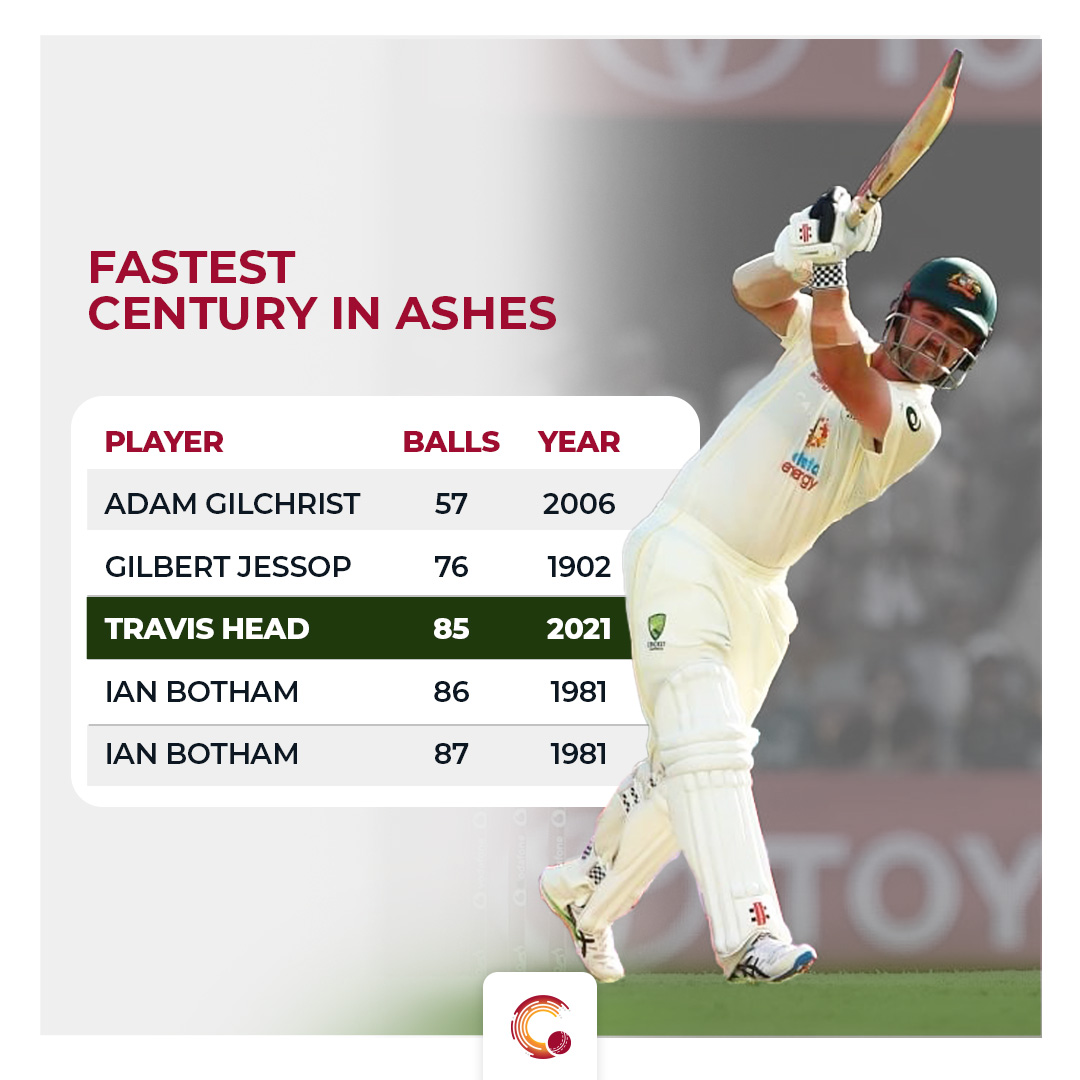 Coming in at number five with the score reading 189/3, Head started the innings steadily by accumulating the ones and the twos. The 27-year old consolidated the innings after two quick wickets and scored quickly against the spin duo of Jack Leach and Joe Root.

After being dropped from the team in the last series against India, Head made a strong comeback in the side and reached the milestone with a boundary off Chris Woakes. Displaying an array of strokes all around the ground, Head remained unbeaten of 112 off 95 deliveries at a strike rate of 117.89. Adam Gilchrist holds the record for the fastest Ashes ton with a 57-ball century in 2006. 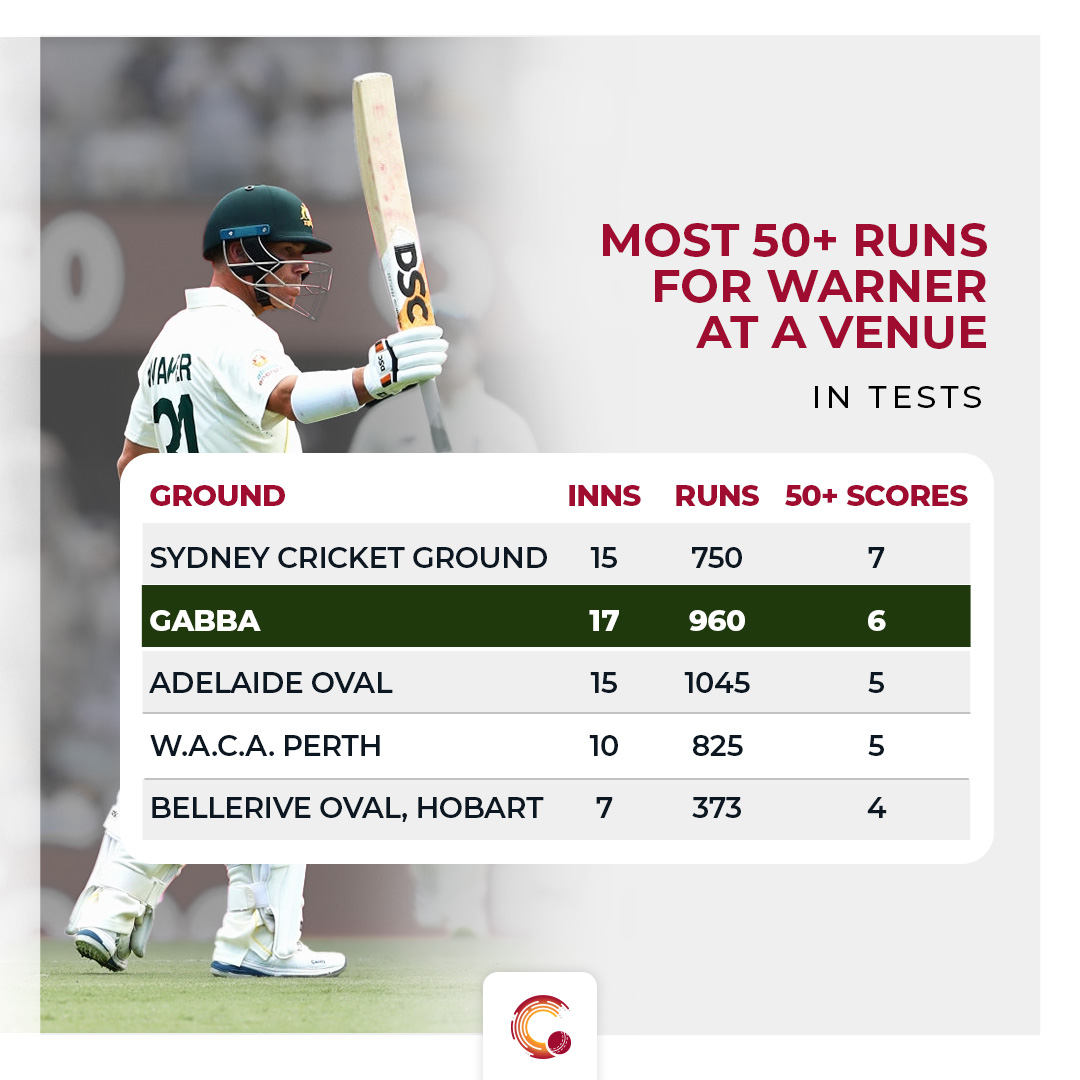 One of the mainstays in the batting unit of the Australian side, Warner, anchored the innings with a well-compiled 94 studded with 11 boundaries and two massive hits over the fence. The southpaw made optimum use of three reprieves early in the innings to score his sixth half-century at the Gabba, the second-most for him at a venue. On his home ground at the Sydney Cricket Ground, Warner has seven half-centuries, which is the most for him. 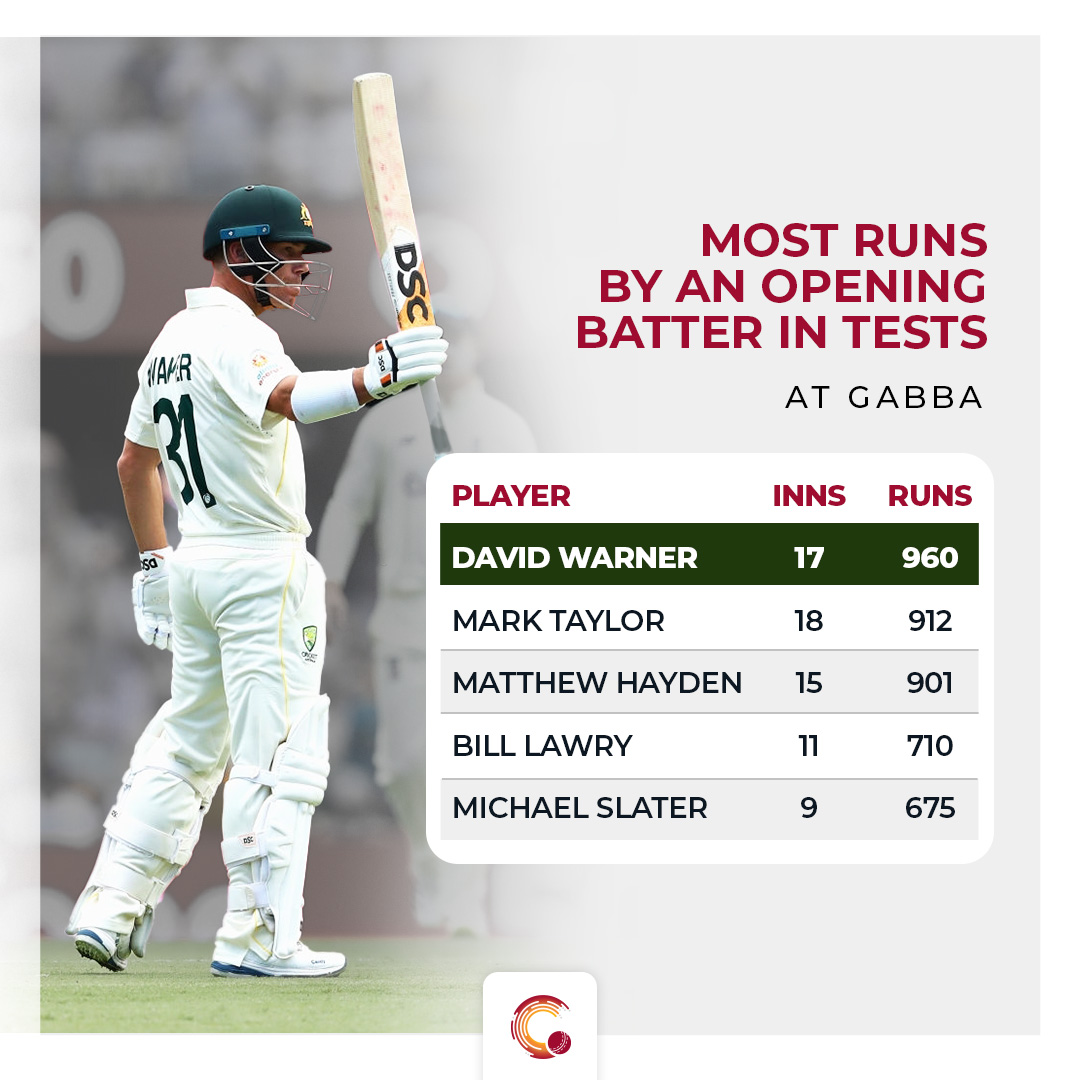 En route to his crucial 94, Warner edged past Mark Taylor to become the most successful opening batter at the venue with 960 runs. While Taylor scored 912 runs in 18 innings, Warner achieved this feat in 17 innings to become the leading run-scorer at the Gabba.

After bundling out England for 147 runs in the first innings, Australia were in dire need of a solid opening partnership on a bright and sunny day at the Gabba. While Warner was the firm favourite to open the innings for the home team, Marcus Harris' place in the side has been under the scanner following below-par performances in the longest format. 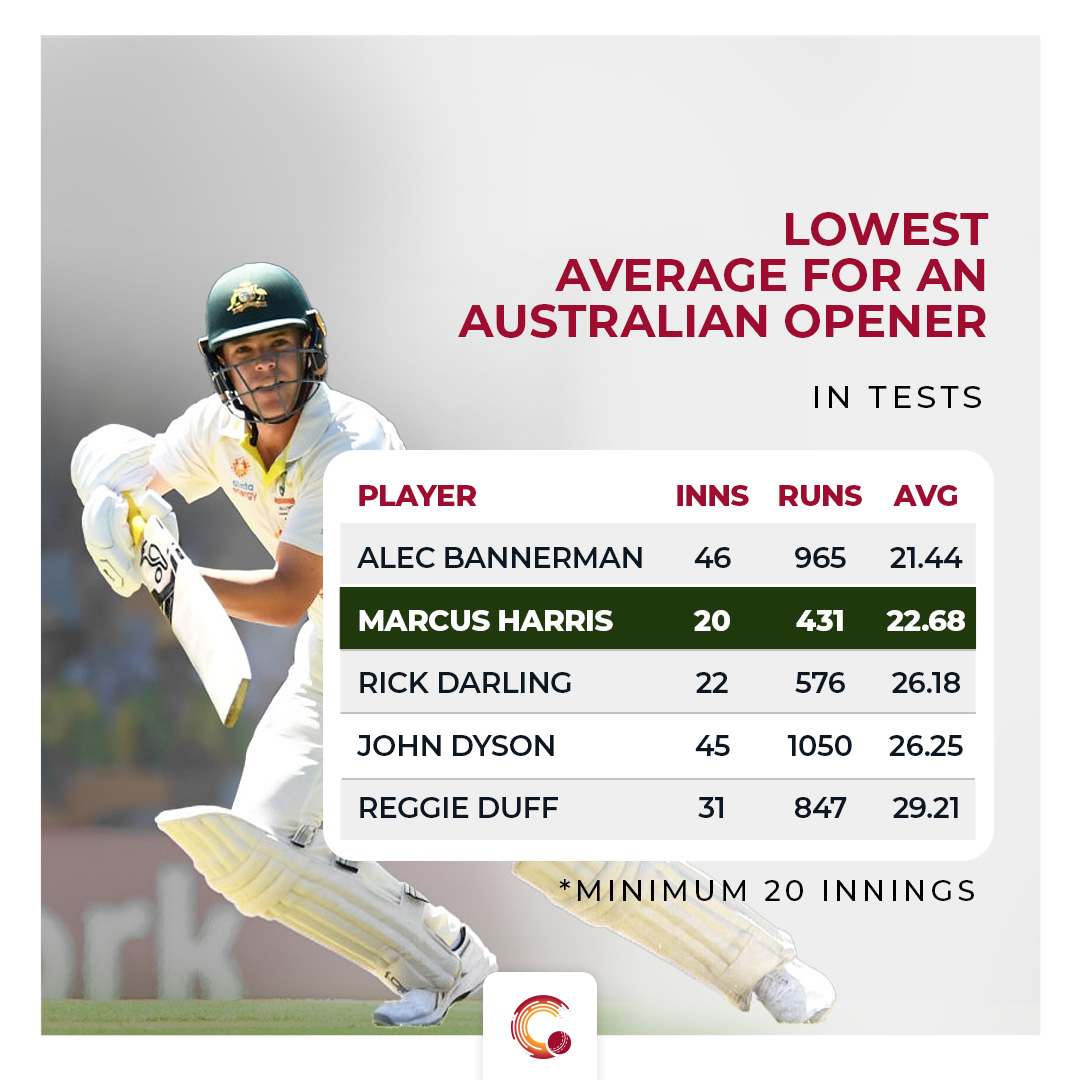 The southpaw endured yet another tough outing with the bat as he was caught in the slip cordon for three runs by Dawid Malan. In Tests, Harris has scored 431 runs in 20 innings at an average of 22.68, which is the second-lowest by an Australian opener with a minimum of 20 innings. Alec Bannerman, with 965 runs in 48 innings at an average of 21.44, is the lowest for the home team.