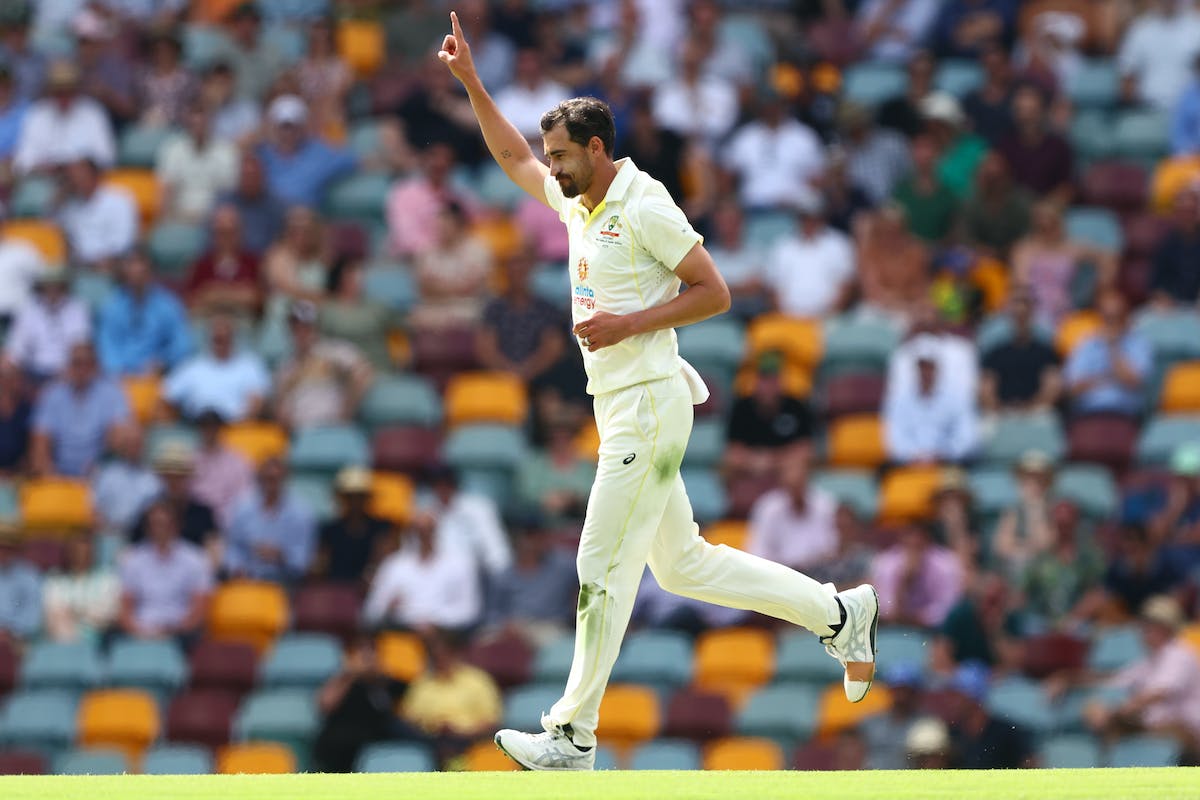 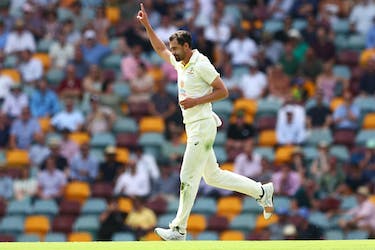 All things considered, the current version of Starc the red-ball bowler is the best he’s looked in Test cricket in years

If not for a spill from Travis Head at short leg, Mitchell Starc would have had his 300th scalp on the very first day of the Gabba Test.

Starc bowled a nasty short one to Kagiso Rabada, who fended at it uncomfortably, completely undone by the pace and bounce. It was a tough chance but Head himself has taken tougher ones in recent times. It was not an impossible grab by any means.

‘Damn it, Travis. Why? Why couldn’t you hold on to it?’ is what many felt like uttering at that moment, for the spill temporarily delayed what was a very special moment for Starc.

As it turned out, however, the drop from Head was nothing but an act of god.

55 overs later in the game, the moment arrived, but in the most spectacular and fitting fashion imaginable.

Starc got to the landmark the only way every single cricket fan wanted him to get to it, through a full, pacy trademark inswinger that moved ever-so-late to uproot the batter’s stumps. 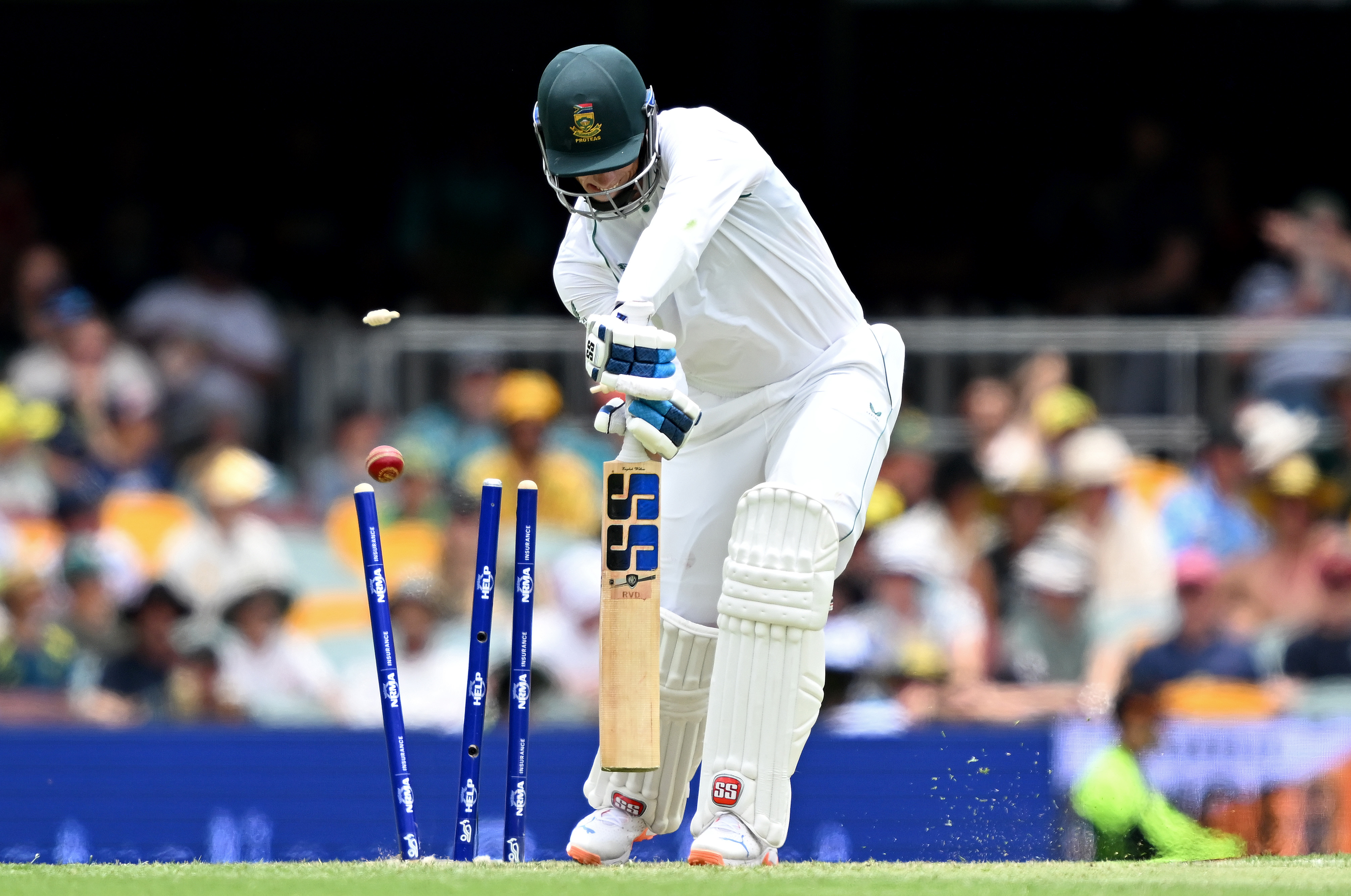 Starc let out a roar the moment he castled Van der Dussen, and the whole of the Gabba roared with him. The noise was no less on social media, where congratulatory messages were being tweeted out at the rate of knots, many labeling the left-armer as one of Australia’s best ever.

Without a shadow of doubt, Starc would have drank it all in.

Indeed, because for all the tireless work he’s put into his game over the last decade, the special moment in the limelight was nothing short of what he deserved.

But more so due to the fact that a year and a half ago, it looked like he might not get there.

20 months ago, as India, with effectively their ‘C’ team, breached the Gabba fortress and made it two series wins out of two Down Under, Starc’s stature as a starter in the Test side was under serious threat.

In a series where Cummins and Hazlewood were a cut above the rest — 38 wickets at 20.00 between them — Starc finished the 4 Tests as the worst seamer across both sides, averaging 40.72 while taking just 11 wickets across 8 innings. 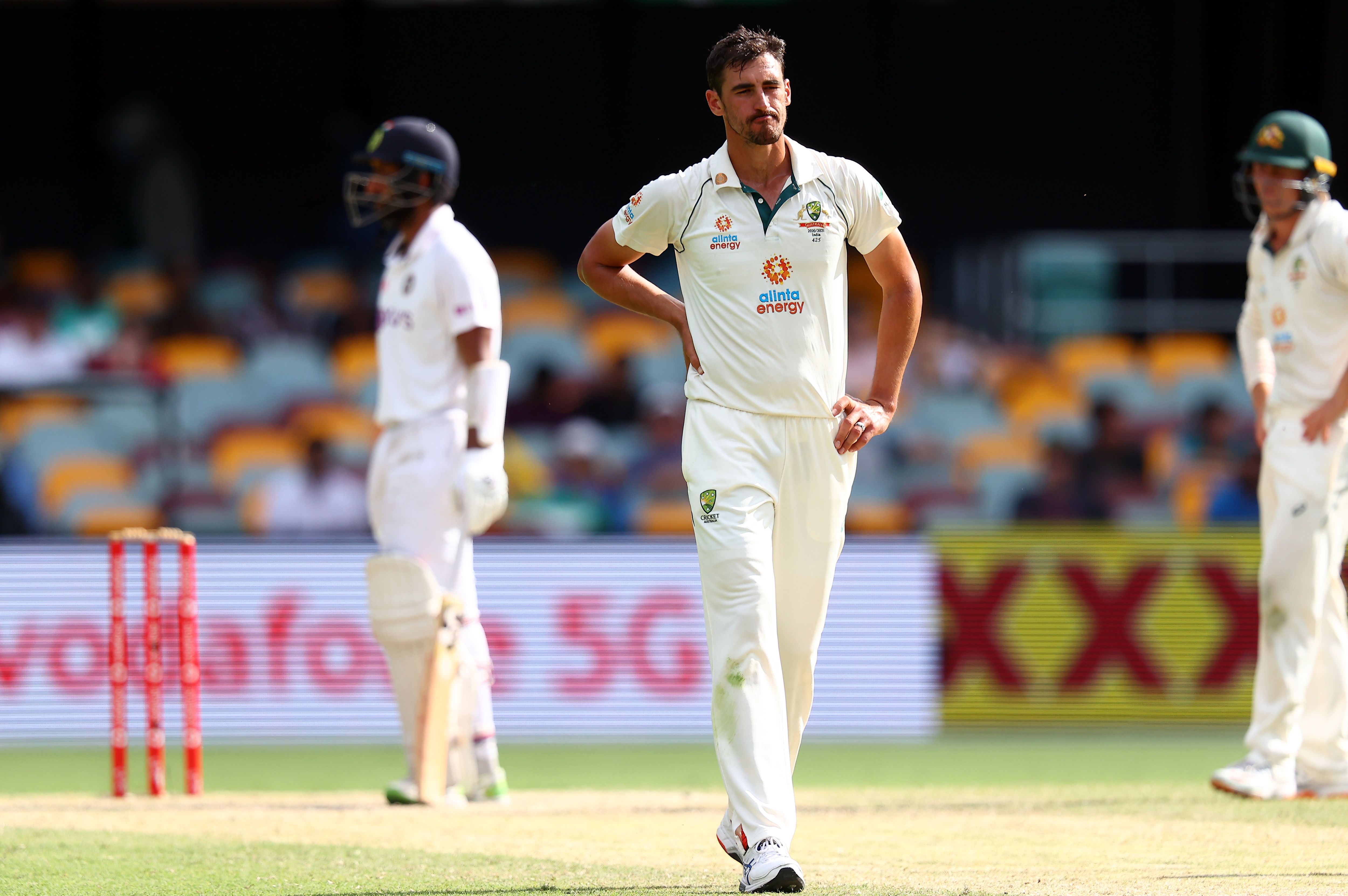 Even the best of players have a forgettable stretch of matches, but in Starc’s case, it was more than just ‘one bad series’.

That season he played 7 Sheffield Shield games for New South Wales and returned appalling numbers, taking 16 wickets at 47.31. Something just felt off.

Externally, the pressure was mounting on the Australian management to make changes on the back of the Border-Gavaskar humiliation, and in the firing line were two players: Starc and Nathan Lyon.

Among the two, though, Starc was the more dispensable asset owing to the country’s strength in depth in the pace department. Neser, Richardson and Boland were all waiting in the wings, ready to pounce; that was not the case when it came to spin, with Lyon still being clear of the rest.

Starc, then, in all likelihood, would have been axed from the starting XI had the South Africa tour gone ahead as planned.

And well the rest, as they say, is history.

18 months on, Starc is well and truly back to his best

Prior to the start of this calendar year, rarely did a series go by post 2018 without there being discourse around Mitchell Starc.

In that way, the build-up to this three-Test series between Australia and South Africa was weird. For there was absolutely no talk whatsoever about the presence of the left-armer.

That, largely, was down to just how well he’d done in the preceding year, his resurgent showing helping him win back the trust of the fans.

Since the start of the Ashes last year, Starc has been consistently impacting games, living true to his reputation of being the strike-man by providing match-turning, match-defining breakthroughs at crucial junctures.

In the Ashes, Starc took 19 wickets at 25.36 and an astonishing 16 of them were against Top 7 batters. He set the tone for the entire series with the wicket of Rory Burns on the very first day of the tour, and made several game-defining breakthroughs, two of them being the wicket of Joe Root in the second innings of the Adelaide Test and the wickets of Root and Bairstow on the first day of the Boxing Day Test.

In Pakistan, he put Australia in pole position to win the second Test in Karachi by ripping through the middle-order on the third day, and eventually set-up the series win in Lahore through an astonishing display of reverse swing bowling in the final session of Day 3, where he accounted for the scalps of Babar Azam, Fawad Alam and Mohammad Rizwan. 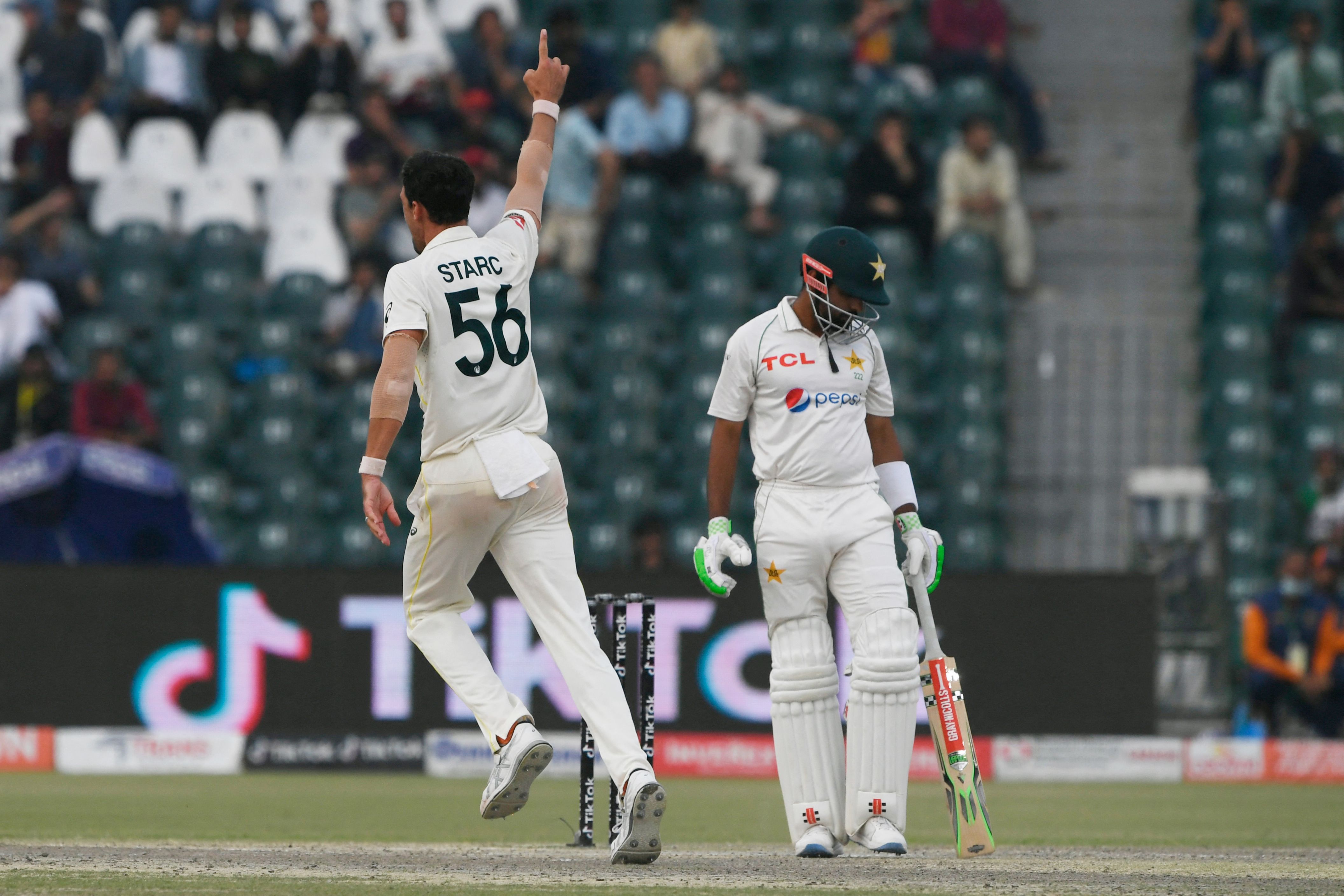 He picked up a four-fer in the only innings in which he got an extended bowl in Sri Lanka, while against the Windies, it was he who bust the Perth Test wide open with the double-blow of Jermaine Blackwood and Joshua da Silva with the second new ball. There, prior to Starc’s double strike, Australia had picked up just one wicket in the preceding 25 overs.

And at the Gabba against the Proteas, Starc, after removing Dean Elgar in the fourth over of the match, struck a game-defining blow by putting an end to the 98-run stand between Bavuma and Verreynne. The duo put the visitors on the front foot post the loss of four early wickets, but Starc’s strike — which ended a 164-ball drought on a spicy wicket — enabled the Kangaroos to get into the tail and knock over the Proteas cheaply.

Starc has always been associated with his firepower, but what’s been telling in these last 12 months has been the discipline and control with which he’s bowled.

Since Ashes 2021/22, Starc has managed to maintain an ER of 2.96, which is significantly better than his career ER of 3.29. Never in his career has the 32-year-old maintained a lower economy across such a large stretch of matches (13 Tests).

Three of his five most economical spells in Tests, in fact, have come in these past 12 months.

‘Spraying’, then, has been minimal. Or even non-existent. But forget the added control, there’s a bigger reason for the Australian fans to be excited about: Starc seems to have re-discovered the ability to consistently shape the ball into the right-hander, and do so wickedly, something that seemed like it had waned away.

There were positive signs in both the T20 World Cup and the ODIs vs England, and across the three Tests he’s played this summer, the left-armer has been able to generate plenty of swing. This summer, we’ve already been witness to a handful of Starc’s trademark dismissal; it’s significant as this simply wasn’t the case across the past three years. He really seems to have found the sweet spot (once again) when it comes to his wrist-position.

All things considered, then, the current version of Starc the red-ball bowler is the best he’s looked in Test cricket in years.

If we’re being honest, not a lot of us saw this coming!

At the Gabba, Starc became the fifth Australian pacer to get to 300 wickets in Test cricket. Remarkably, none of the other four have a strike rate as good as the 32-year-old.

In fact, among ALL BOWLERS to have taken 300 or more wickets in Test history, only five — Steyn, Waqar Younis, Malcolm Marshall, Allan Donald and Fred Trueman — have a better bowling strike rate than Starc’s 49.6. 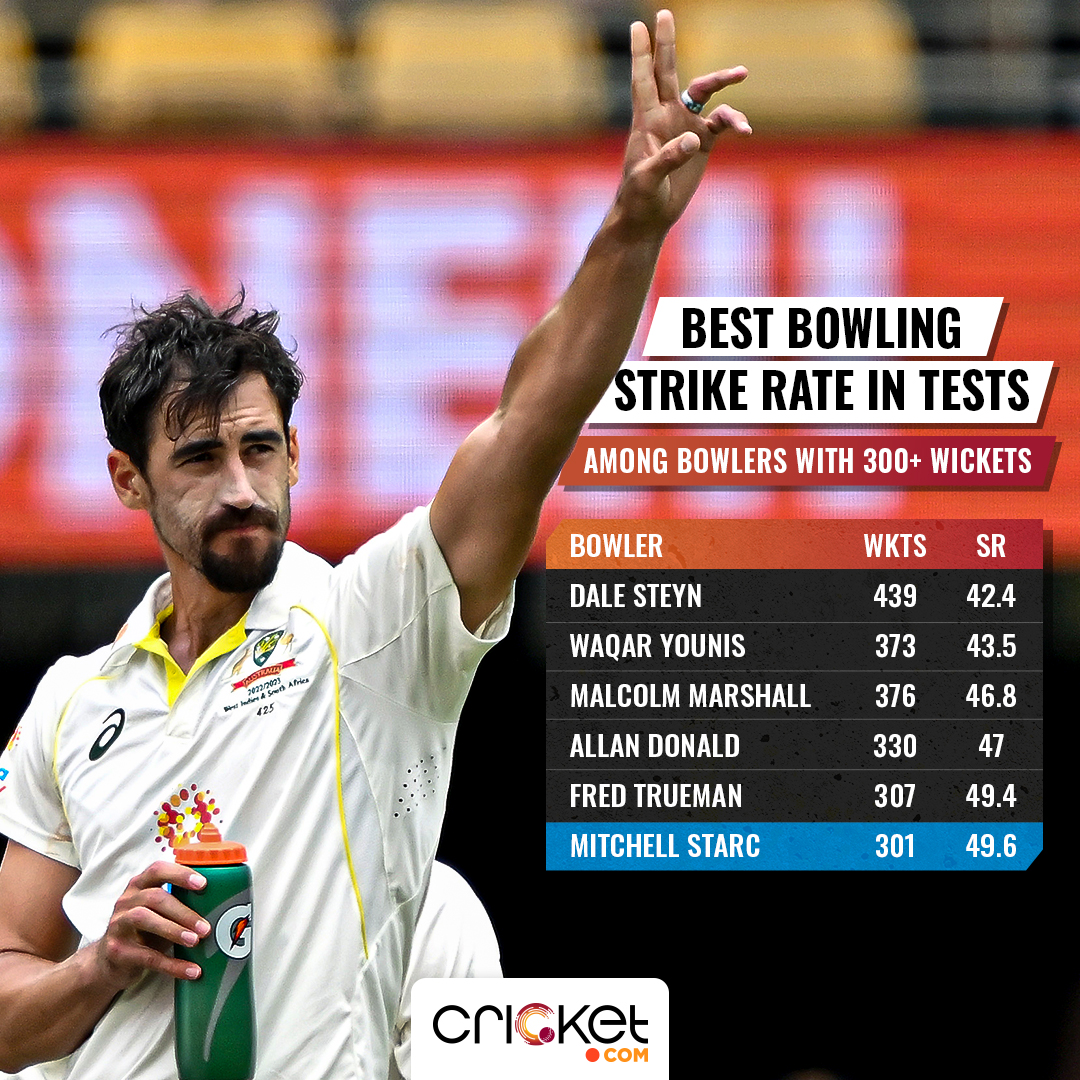 A top-tier strike bowler, rightly and deservedly in elite company.

Whisper quietly, but if Starc continues to bowl the way he has been over these past 12 months, then there’s nothing stopping him from becoming only the second bowler in history to take over 400 wickets at a strike rate under 50.