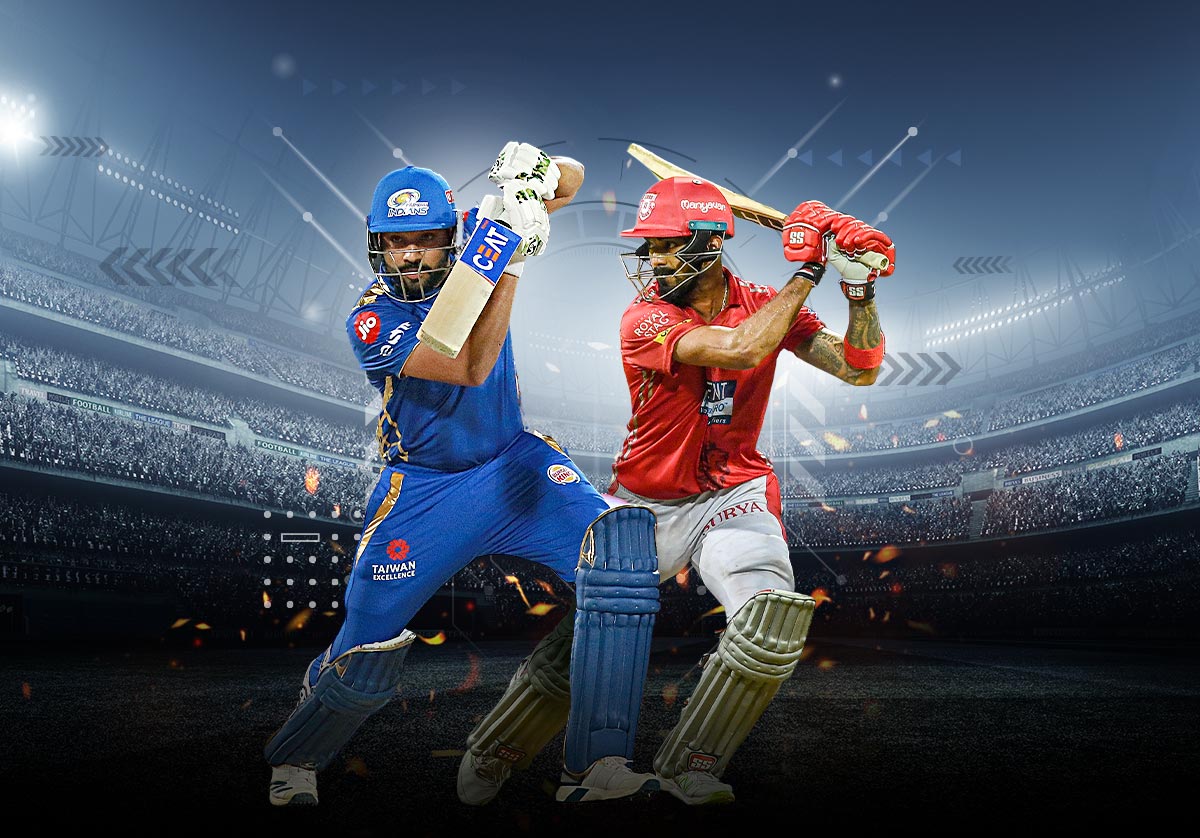 Kings XI Punjab would have been unscathed in the IPL so far, had they held their nerve in some crunch moments. As it turns out, after three games, they have only two points on the board. In the first of the close finishes, they failed to close the game while needing one run off three balls. In the other, they ended up losing while defending 84 runs in the last five overs.

The story is the opposite for the Mumbai Indians. Unlike KXIP, they were the ones who pulled the game back while the opposition was driving home. With 80 needed in the last four overs, a defeat seemed right around the corner. That is when Kieron Pollard, in the company of Ishan Kishan, bullied the RCB bowlers to take the game into the Super Over.

MI have never been good with their first impression. Hence, this indifferent start to a season is not an anomaly. However, while in the other seasons the team looks strong despite the early losses, there are visible cracks in the core this season.

The Pandya brothers have been the smiling assassins for Mumbai Indians. However, things have not gone well for them in this season so far.

There has never been any question mark about the ability of Hardik Pandya. Hardik underwent a back surgery in October last year. Thus, up until the start of IPL this year, he was out of action. As a precautionary measure, he has not bowled so far this season and there is no clear indication of when will he resume his all-round duties.

Considering how important he is with the bat and on the field, there is no option to leave him out. However, this leaves MI with a bowler short and unless they let Pollard bowl, they have only five bowling options.

Five bowling options with an additional sixth choice in Pollard might work for some teams but not for MI. Historically, they have been smart in using Krunal with the ball. In 56 IPL innings, he has bowled 133.3 overs (81%) to left-handers as opposed to only 31.5 overs (19%) to the right-handers. With the option of Hardik, MI were able to use Krunal exclusively against right-handers, based on match-ups.

However, with only five main options they do not have this luxury anymore. As they found out in their game against CSK when Krunal had to bowl the 18th over against Sam Curran. And then against RCB when they had to bowl Pollard instead in the 16th over when Devdutt Padikkal was going gung-ho.

Moreover, even in aggregate, Krunal has diminishing returns with bat and ball since 2017. Since MI need him to be the fifth bowling option, his performance with the ball is more worrying for them. 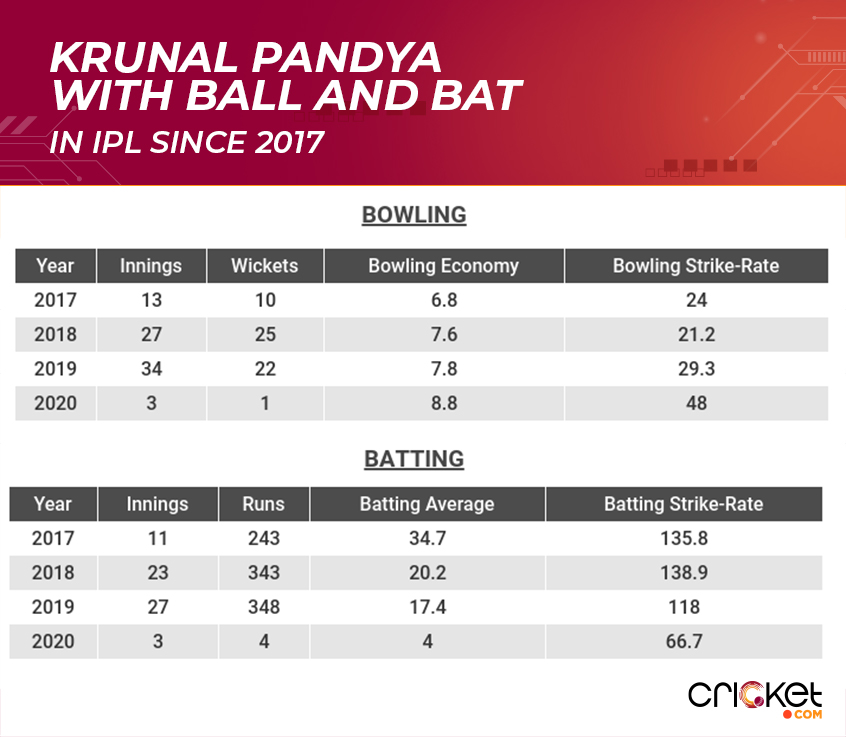 Going forward as MI will need more from their spinners, it will be better to test alternate options like Jayant Yadav, Anukul Roy or even Prince Balwant Rai.

Why no yorkers Bumrah?

2020 has not been Jasprit Bumrah’s year so far. He had a tough tour of New Zealand and is yet to set the IPL on fire. While his overall economy has been 9.8 in the three matches so far, it swells to 14.6 in the death-overs. The underlying reason has been his lengths with the ball. 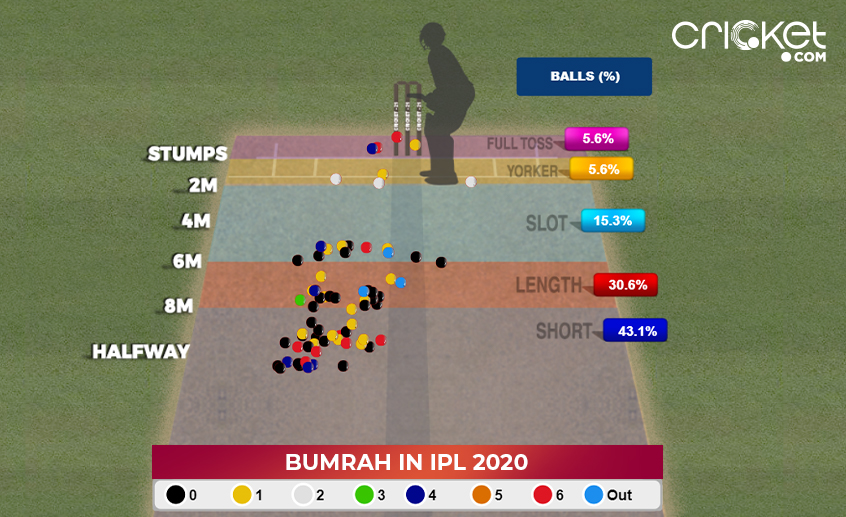 Mere 5.6% of his deliveries have been yorkers so far. He has fallen on the side of being predictable with 43.1% short deliveries that have yielded an economy-rate of 11.8. His affinity to short balls in this season has been higher in death-overs where the proportion increases to 46.7% and the economy-rate increases to 18. The proportion of yorkers at the death falls to 3.3%.

The reason for his indifference is unclear, whether it is a return from injury or just trying to extract help from UAE pitches. But, with no Lasith Malinga around, Bumrah needs to sort his act before it is too late for MI.

The Tewatia fairytale became the cynosure of KXIP’s last game. Sanju Samson enjoyed the leftover adulation. Amid the euphoria of a heroic comeback, a discussion on Punjab’s death-bowling never happened.

Rajasthan needed 63 in the last 23 balls with Samson back in the hut. The next 2.5 overs that Mohammed Shami and Sheldon Cottrell bowled had 12 balls that were either short or in the slot. These resulted in 42 runs.

With 14.3 runs per over at the death so far, KXIP have been the worst bowling attack in that phase. This is after they managed to wrap RCB up in 17 overs. Even in their first game against DC, they threw away the initial advantage and gave away 64 runs in the last five overs.

With a plethora of leg-spin options in their side, KXIP have an overall strong bowling unit. However, they need to solve the death over muddle soon. KXIP can use Shami better by maximizing his overs with the new ball while trying their leg-spinners at the death. They cannot be worse than their pacers as of now.

On the batting front, Mayank Agarwal and KL Rahul are having a dream run. However, with the benefit of hindsight, Rahul’s run-rate of 7.67 in a 183-run partnership in the last game as compared to 11.15 of his team’s is questionable. Based on the ease of run-scoring on the venue that night, KXIP could have pushed for more.

An additional concern for KXIP is a lack of support for their openers. While one can argue that others have not got much chance to shine, they have been rusty whenever presented with an opportunity. This might hurt them at a crucial juncture.

Going into the clash, both sides have one victory in three matches so far. They will be looking to get back to winning ways before the walls start closing in on the prospects of their qualification.