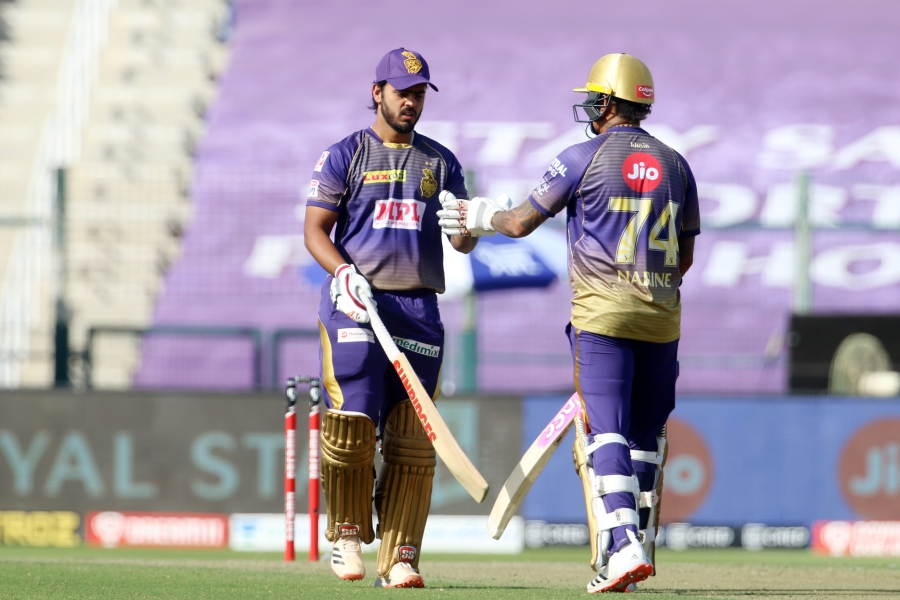 Kolkata strengthened their grip on fourth spot with an easy win against Delhi while Punjab continued their winning run with major help from Hyderabad. Here are the significant statistical milestones from the double-header on Saturday (24th October 2020).

After being put into bat by Delhi Capitals skipper, Shreyas Iyer, Kolkata Knight Riders had a new opening pair. Nitish Rana who has had a dismal season opened alongside Shubman Gill. However, from KKR’s point of view, it was yet another failure at the top. But, Rana in his new role stayed put and in a surprising turn of events, Sunil Narine was sent ahead of Eoin Morgan. The two were slow to start with, but pressed the accelerator when the spinners were introduced. In the end, Rana and Narine posted KKR’s first 100-run partnership to power them to a total of 194. 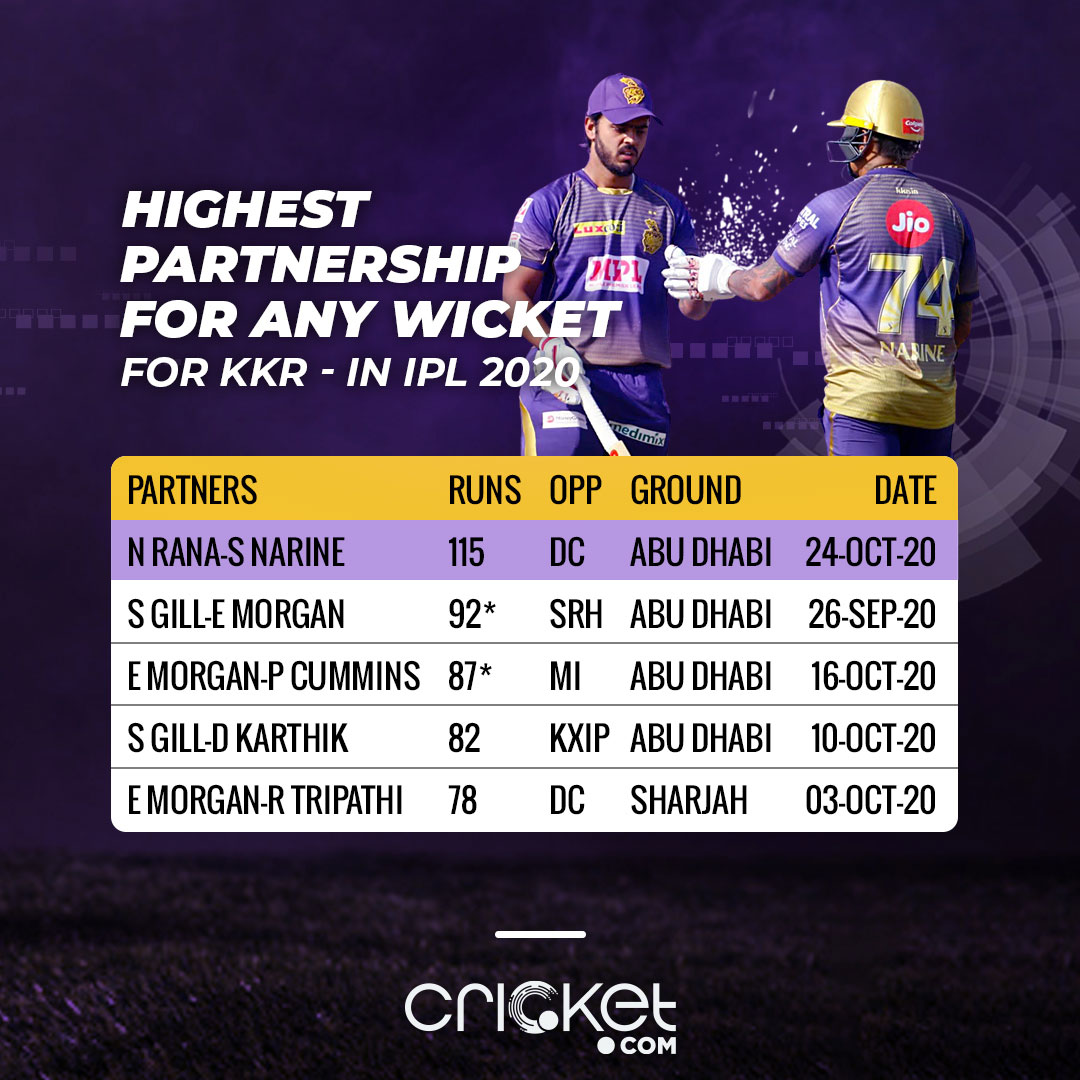 Second highest score in the middle overs this season

Time and time again this season, KKR's middle-order have been put under severe pressure. When Dinesh Karthik failed to impress again, Rana had a mountainous task ahead of him. However, Narine who came in at number 5, took the pressure off Rana with his natural aggressive intent. Taking the attack against of the best bowling lineups in the tournament, KKR posted 106 runs during overs 7-15. This was the second-most runs a team had scored in this phase in IPL 2020. Kings XI Punjab had posted 112 runs against Rajasthan Royals in Sharjah, which is the most.

At the halfway stage, KKR would have thought 160 would have been a good total to defend. But, the partnership of Narine and Rana got more than what they expected. Following yet another disastrous Powerplay, KKR had 75 runs for the loss of three wickets in the first half of the game. However, Rana and Narine had got their eye in by the start of the second half of the innings. KKR batsman amassed 119 runs in overs 11-20 that propelled them to a total of 194/6, which is their second-best this season. Their highest total also came against DC in their reverse leg when they put on 210 chasing 229 in Sharjah. 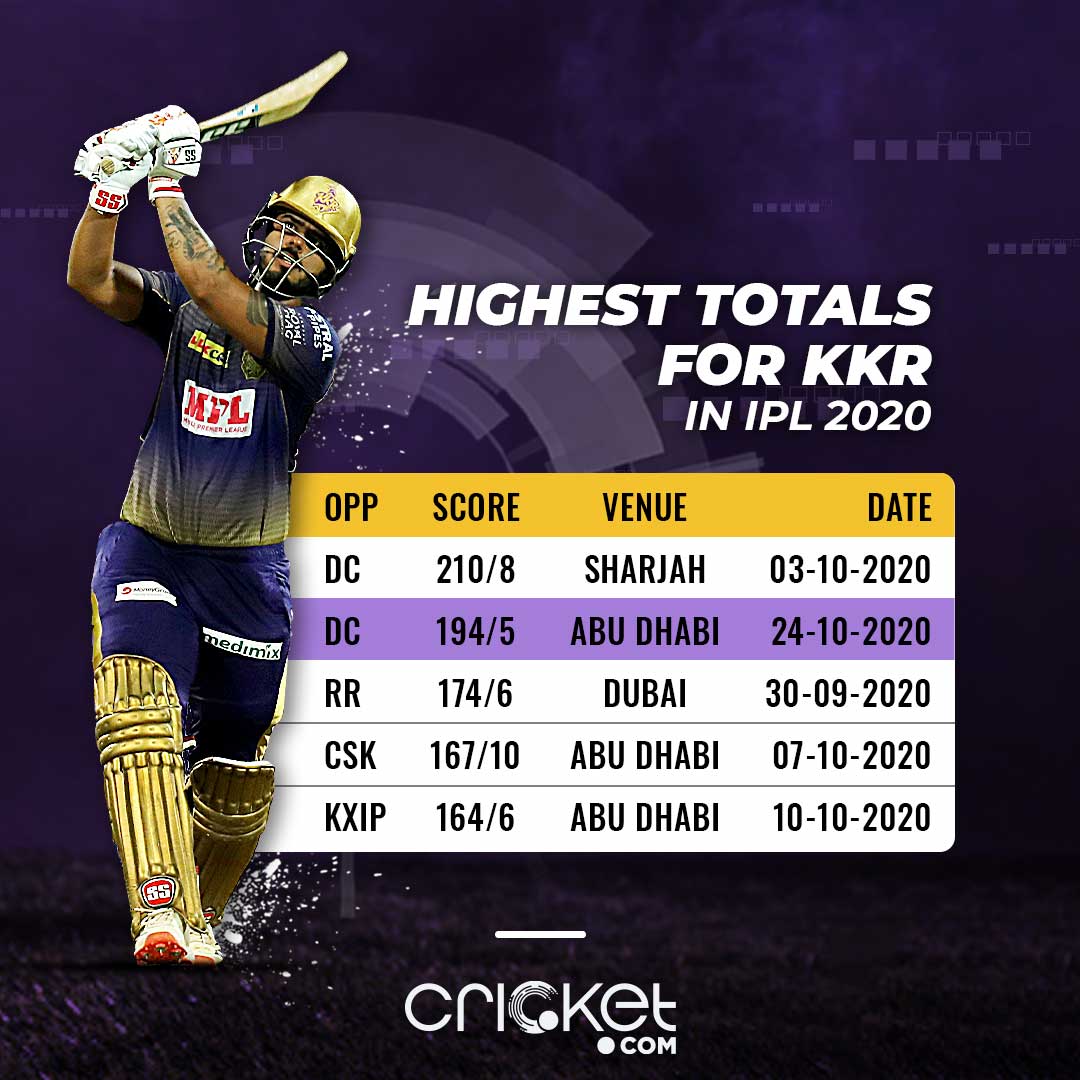 Though it was a horrendous day for DC, one batsman will be happy to the fact that he became the first batsman to 100 sixes for the franchise in IPL. Rishabh Pant, when he clubbed a six off Prasidh Krishna in the fifth over, reached 100 sixes in IPL. No other batsman from DC has hit 100 sixes. Virender Sehwag is second on the list with 85 and closely following them, DC's current skipper, Iyer is at 80. 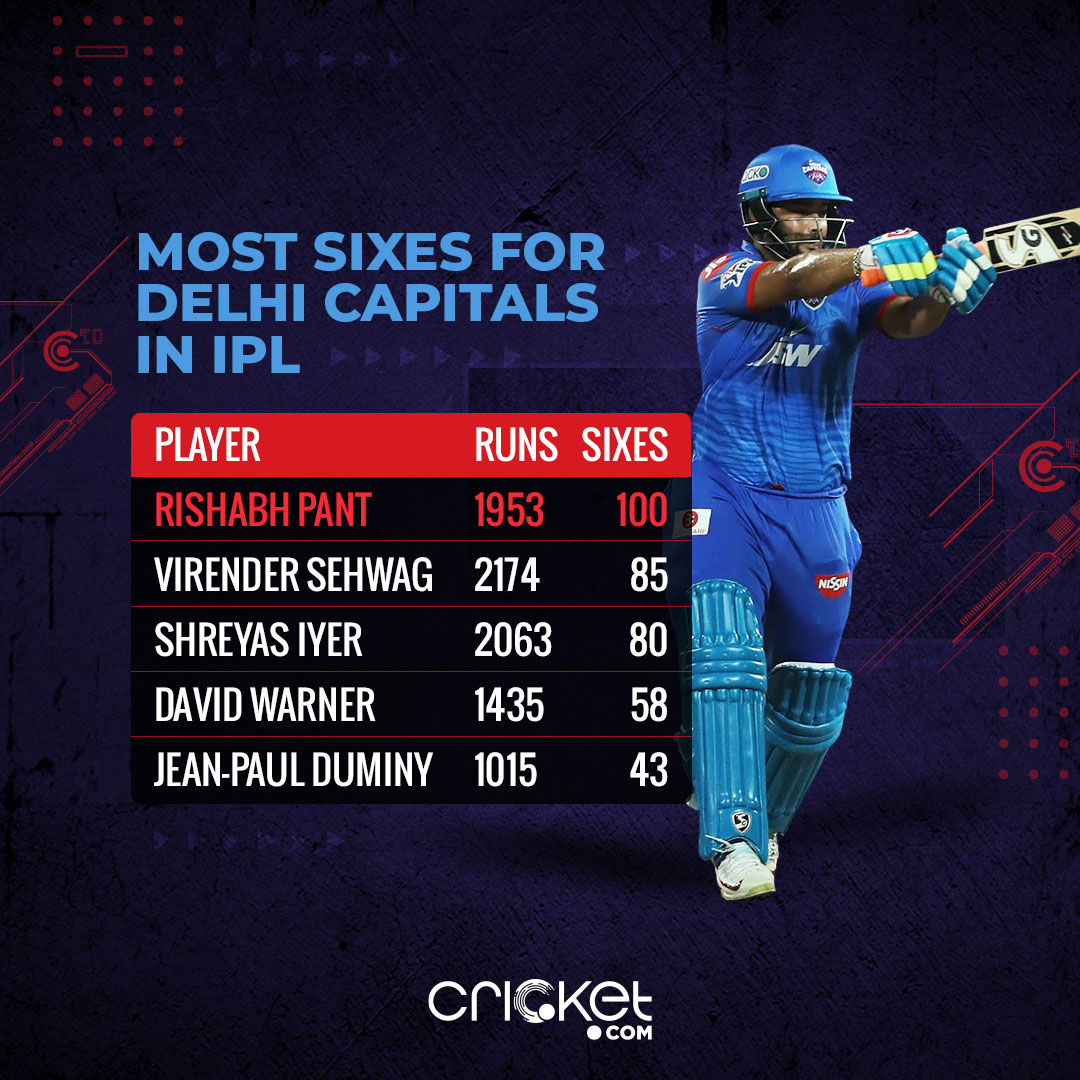 With a mammoth total to defend, KKR were off to a flyer from the word go. Ajinkya Rahane was packed off in the first ball of the innings and the back-to-back centurion Shikhar Dhawan in the third over. With two Indian batsmen out of the contest, it was Iyer and Pant who were left among the Indian batsmen who play spin well. But, Varun Chakravarthy didn’t bother about it as he picked up Rishabh in his first over. In his second over, he scalped Shimron Hetmyer and Iyer off back-to-back deliveries. That didn’t stop there, in his third over, he accounted for Marcus Stoinis and Axar Patel. By virtue of these wickets he became the second KKR bowler to bag a five-wicket haul in IPL. Narine against KXIP in 2012 had registered a spell of 5/19, which is the best by a KKR bowler. Chakravarthy's figures of 5/20 are the best by a bowler this season. 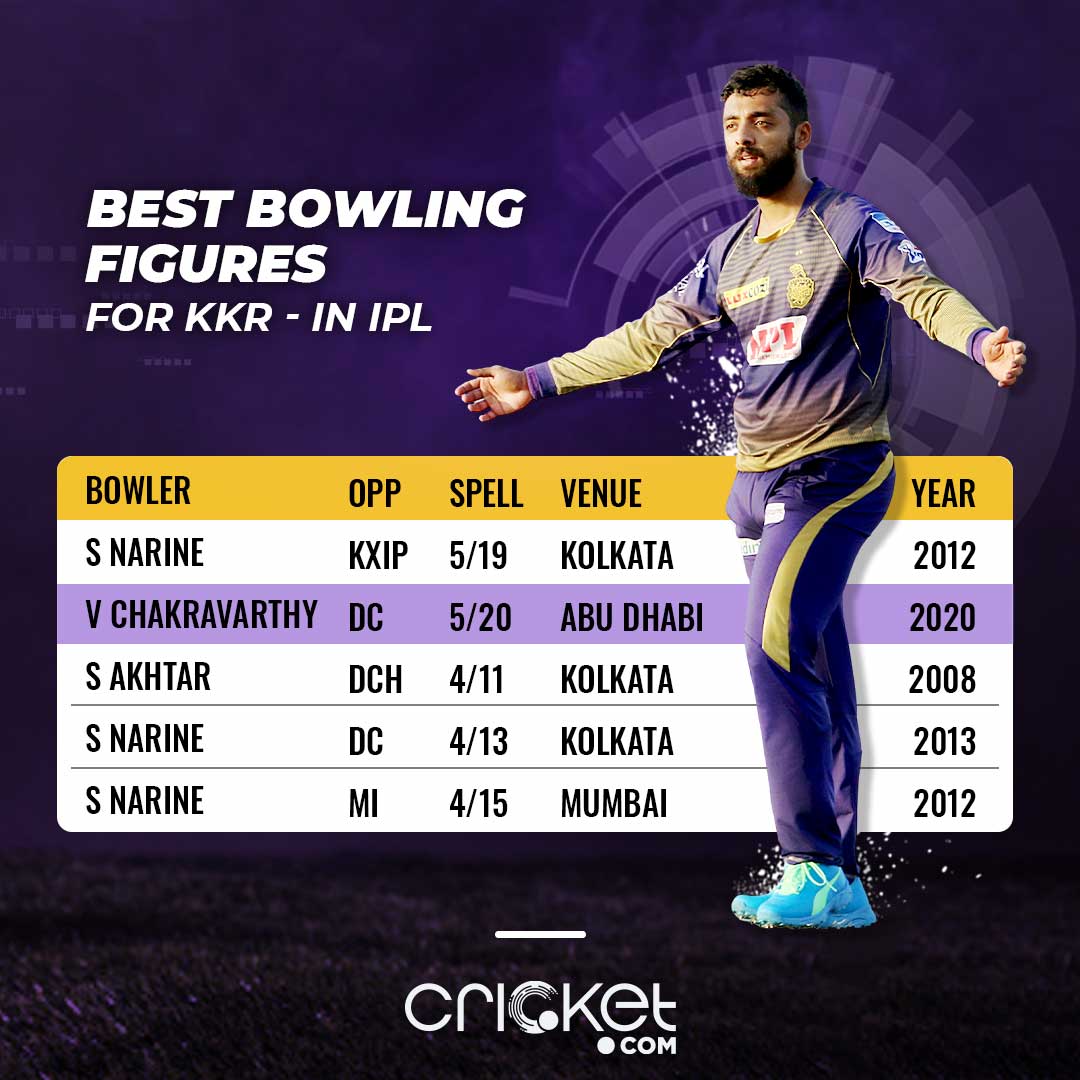 Third youngest to 100 wickets in IPL

Sandeep Sharma has been one of the best exponents of swing bowling. Irrespective of the conditions, he has the natural ability to tail it in towards the right-handed batsmen. Probably, one of the reasons why most of his wickets are during the Powerplay. Against Punjab, when he dismissed Mandeep Singh in the fifth over, he became the 15th bowler in IPL to bag 100 wickets. At the age of 27 years and 159 days, he became the third youngest to achieve this feat in IPL. Piyush Chawla is the youngest (26 years and 117 days) to 100 wickets in IPL. 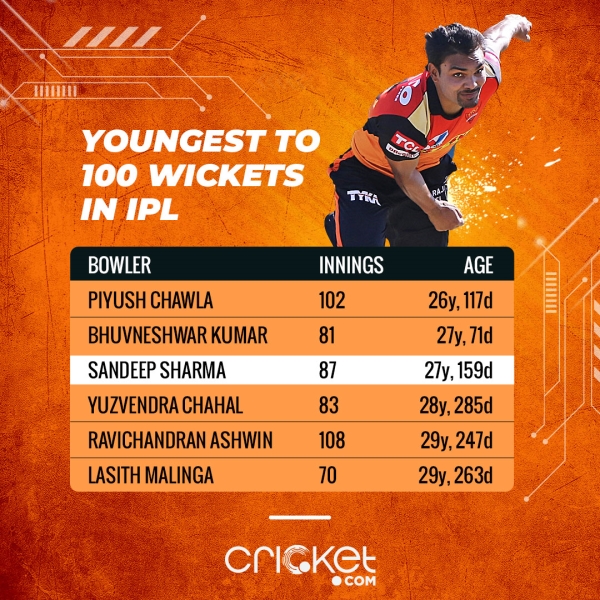 With fierce hitters like Chris Gayle, Nicholas Pooran and to some extent KL Rahul, KXIP floundered in overs 7-15. With Mayank Agarwal missing out citing an injury, Mandeep Singh opened alongside KL Rahul. Though they lost Mandeep in the penultimate over of the Powerplay, KXIP had put on board a decent score (47/1) at the end of the Powerplay. There on, it was Rashid Khan’s wizardry that cut the run flow. The other SRH bowlers played the role of a second fiddle and kept on piling the pressure on KXIP's batsmen. Hence, KXIP could score only 41 runs and had lost four wickets during overs 7-15. The score of 41 is the second lowest by a team in this phase in IPL 2020. 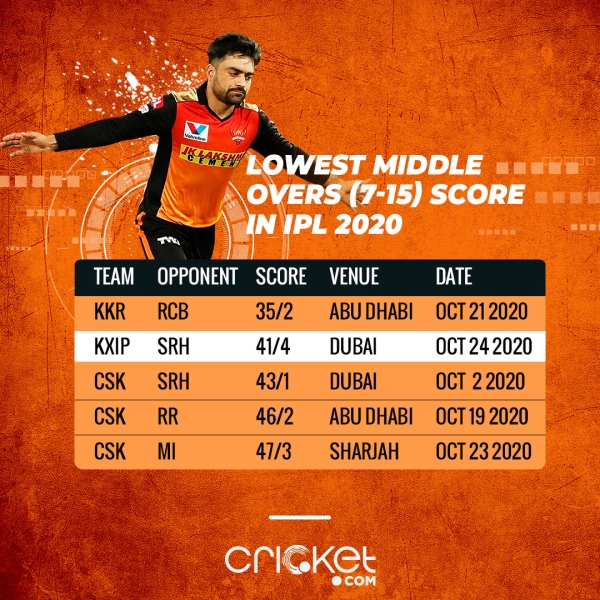 The longest streak put to a halt

The biggest streak of 50+ scores against a team by Warner finally came to an end when he was dismissed for 35 against KXIP. Prior to this match, Warner was on a streak of nine consecutive matches scoring 50 or more against KXIP in IPL. He looked like he would get the 10th, but in an attempt to execute a reverse sweep to Ravi Bishnoi, Warner could only glove it to Rahul behind the stumps. His nine consecutive 50+ scores against KXIP is the longest by a batsman against an opponent in IPL. Warner has 11 scores of over 50 against KXIP in IPL, which is the most by a batsman against an opponent.

20 runs off 18 balls with six wickets in hand, this is a situation in which the bowling team almost gives up hope. But KXIP didn't against SRH. This is not the first time SRH have had collapses this season. In their first match against Royal Challengers Bangalore, they lost eight wickets for 32 runs. Today (24th October), against KXIP, they lost 6 wickets for 7 runs in the last three overs. This is the worst last three overs of IPL for a batting team. Deccan Chargers had lost 6 wickets for 12 runs in the last three overs against Delhi Capitals in 2009 prior to this match, which was the worst. 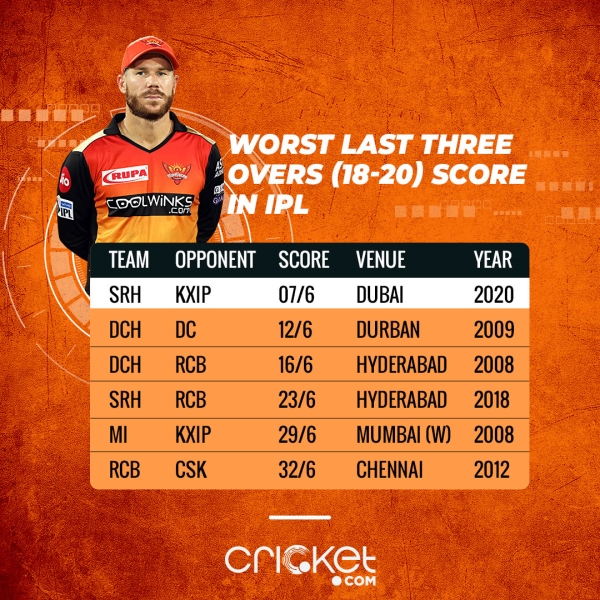 One of the most concerning aspects of KXIP this season has been their bowling. Their batting has delivered most of the time, but their bowling has let them down. Defying odds, their bowlers stepped up in one of the most crucial matches. Following a below-par batting display, KXIP bowlers at the start failed to create an impact. Soon after the Powerplay, spinners came into the act as both openers were dismissed in successive overs. There on, KXIP bowlers put a stranglehold on the SRH batsmen. Although there wasn’t much pressure throughout the chase, SRH choked at the end. The total of 126 defended by KXIP is their second-lowest in IPL in a complete 20-over match. Against Mumbai Indians in 2009, they had defended 119, which is the lowest. This is also the first under 150 total that has been defended in IPL 2020.

In the words of Bill Gates “It is fine to celebrate success, but it is more important to heed the lessons of failure”. This is something SRH needs to focus on. Every now and then, from the jaws of victory they have managed to fluff it. Against KXIP as well, chasing a meagre target of 127, their openers Jonny Bairstow and Warner provided a near perfect start. Even though they lost their openers in back-to-back overs at the start of the middle-over phase, they had set it up perfectly. The rest of SRH batsmen were slow during the middle overs (7-15), but also, the target wasn’t out of reach. What caused the muddle was a major collapse in the last few overs that saw them fall short by 12 runs. The target of 127 is the lowest SRH have failed to chase in the IPL.