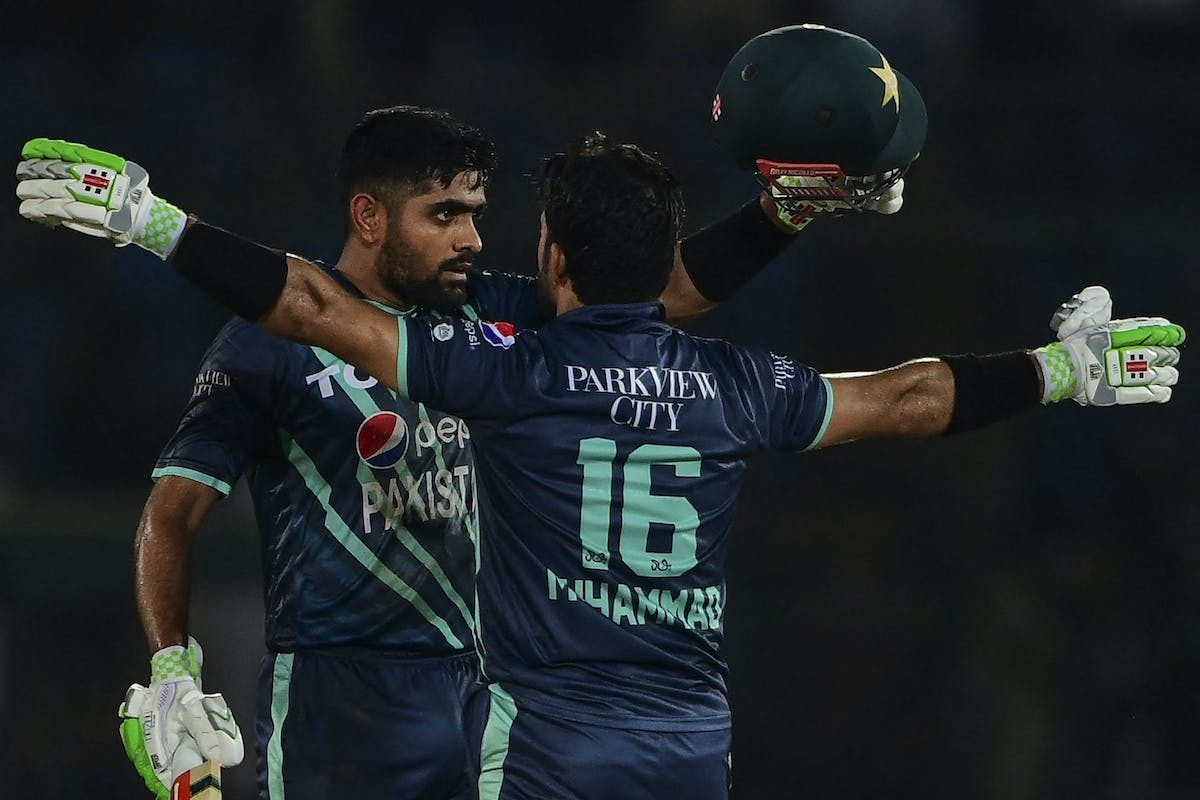 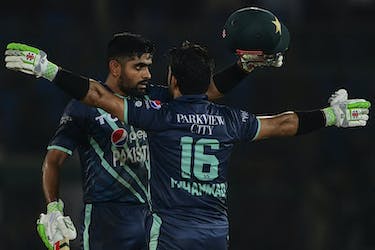 After a series of low scores, the Pakistan captain returned to form with a magnificent century against England

In a matter of few days, we’ve seen both Virat Kohli and Babar Azam silence their critics with outstanding innings. However, it was different for both players. For Kohli, it was about scoring his first century in three years and as far as Babar is concerned, he wanted to show the world that he too can play an aggressive innings at a good strike-rate in his team’s victory.

Often referred to as a “statpadder” for shielding the strike, getting to a milestone and completely disregarding the situation or his below-par strike-rate is something the Pakistan captain has had to deal with. He also had a poor Asia Cup with scores of 10, 9, 14, 0, 30 and 5, while his opening partner Mohammad Rizwan finished as the highest run-getter in the tournament with 281 runs at 56.20.

While Rizwan continued to dish out the runs, the pressure remained on Babar to turn his fortunes around. Strike-rate was no longer the issue, but the fact that runs were not flowing from the Pakistan opener’s bat was a cause for concern, especially with the T20 World Cup not too far away.

He showed intent in the first T20 International (T20I) against England in Karachi, but was bamboozled by a beauty from Adil Rashid. Once he was dismissed, Pakistan further managed just 73 from the remaining 63 deliveries and that proved to be costly as England registered a comfortable victory.

In the second game, England batters rallied to set Pakistan 200 at the same venue. At the end of their innings, one thought it would be enough.

At the halfway stage of Pakistan’s chase, Pakistan had 87 on the board without losing a wicket. During the drinks break, head coach Saqlain Mushtaq had an animated chat with Babar. He had after all hit 38 off 31 deliveries, while Rizwan at the other end was striking at over 165. It was a precarious stage in the match where one wicket could have opened the floodgates for Pakistan with the likes of the inexperienced Haider Ali and Shan Masood, who was playing just his second T20I, to follow.

The chat, one presumes, would have been for Babar not to throw it away from here. He had played his part to perfection till then, but one rash stroke and all the hard work would have been for nothing. A lot rode on the next couple of overs. And that’s when Babar shifted gears. 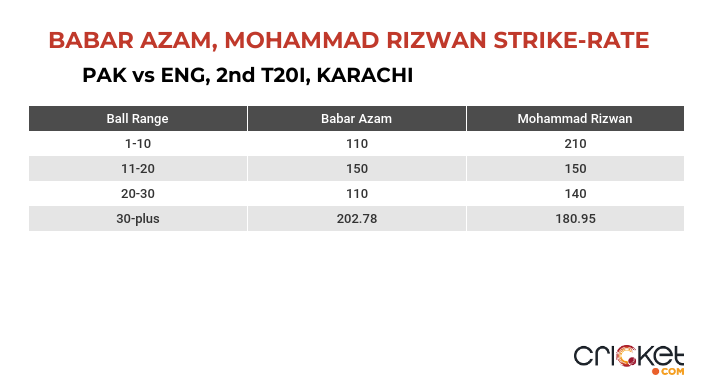 Adil Rashid, who has been one of the best bowlers in the middle-overs in the recent past, was not spared either. Moeen Ali too delayed bringing himself as there were two right-handed batters at the crease. But it was the over where Babar completely cut loose smashing the first ball over deep mid-wicket and a full delivery over long-on, before he had smashed Luke Wood sailing over the fence with the ball pitched in the slot.

Moeen’s over accounted for 21 runs which completely tilted the game in Pakistan’s favour and for the first time in the match, one would have started to believe that the hosts could actually chase this down with all 10 wickets intact. They had chased down 152 against India in the T20 World Cup last year by 10 wickets, but the target in this game was a little steeper. In a matter of 11 months, could Rizwan and Babar chase down a target in excess of 150 twice?

In the hindsight, one could always look back at a couple of key moments for England in the chase: Alex Hales dropping Rizwan in the sixth over and Phil Salt missing a stumped chance a little later. However, one could also argue that England may not have posted this big target had Pakistan too gotten rid of Moeen on 32, when Khushdil Shah dropped a dolly.

While there is little doubt that Rizwan’s T20I career was revived after he began to thrive as an opener. Incidentally, when he was asked to open in the T20Is against New Zealand in 2020, it was because Babar was out injured. The 89 in the series decider in Napier followed by a century against South Africa in Lahore sealed Rizwan’s place at the top.

It was then a question of whether Babar would continue to open with him or come in one-down. He took a call to open with Rizwan and since then they have been a thorn in the opposition’s flesh.

Babar had been opening for Pakistan a couple of years before Rizwan did and in that period, he smashed 1,104 at 52.57 with a strike-rate in the mid-130s.

Since opening with Rizwan, though his average has dropped way down, while his strike-rate has remained the same more or less, which has perhaps led to it being an issue.

The Babar-Rizwan stand has always been the one that sets up the platform. It is evident that Rizwan has been more of the attacking one in this partnership, it was Babar who played a similar role previously hence the stark difference in average.

With around 10 games to go before the T20 World Cup, Pakistan may have several problems in their line-up, but their first wicket partnership is certainly not one of them.