We will have our plans in place for Kohli, says Langer 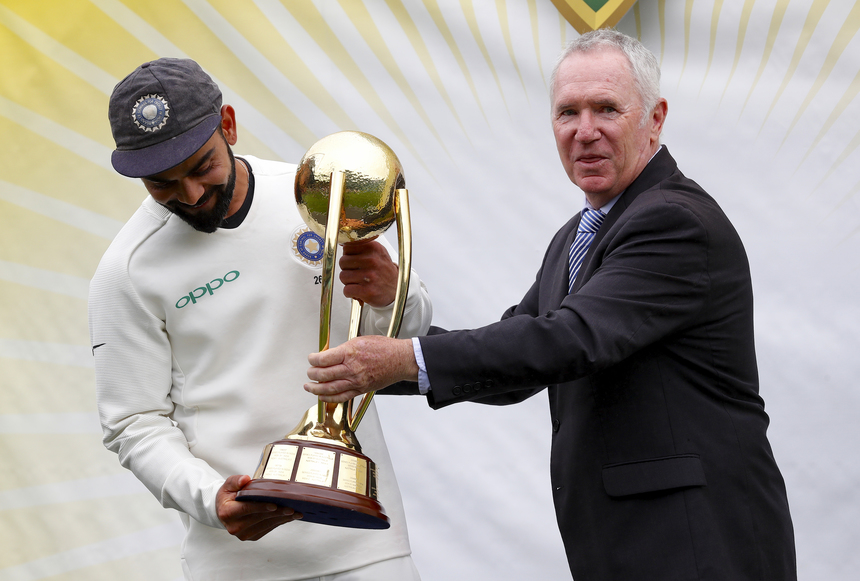 We will have our plans in place for Kohli, says Langer

Australia coach Justin Langer on Tuesday (15 December 2020) asserted that his team will "have plans in place" for Indian talisman Virat Kohli as cricket's heavyweights renew one of the sport's greatest rivalries with the opening day-night Test here from Thursday. The four-match series opener at Adelaide Oval will be the only time India captain Kohli will play Test cricket Down Under this summer as he will return home after the game to attend the birth of his first child"

Langer, however, is determined to stop Kohli from setting the tone for the series. "He is a great player and an equally great leader. I have got so much respect for him but we are going to be really well planned for him because we know how important he is for India as a leader and as a batsman. So, we will have our plans in place.

"The next trick is to execute them, hopefully, keep him out of the game with his runs. At the end of the day, that's where he is going to have the biggest impact. We've seen a lot of him now, and he has seen a lot of us too," Langer said during a virtual media interaction.

Langer also made it clear that his team will focus more on the skill part and look for ways to get Kohli out instead of needlessly engaging with him. "What we talk about is how to get Virat out. He is such a great player, we don't talk about whether we taunt him or not. That's rubbish... We play on the skill, not on emotions, at least we try to."

"There is obviously emotion in the game, no doubt about that, we are going to control our emotions."

Australia may have played more day-night Tests compared to India's one but according to Langer, his team would have no advantage heading into the opening pink ball match. "I have always said that the best players and best teams adapt regardless of the big game or the colour of the ball, so whether it is the red ball or the white ball or the pink ball, the best players and teams adapt to it.

"So, what has happened in the past, it is nice to replay. India have just come off a day-night practice game, we have done a bit of practice under lights. "We haven't played for 12 months or so, so when it comes to the crunch, regardless of the ball, regardless of whether it is day-night or a day Test match it is game on. I don't think it (our past performance) has given us much advantage at all," added Langer.

The hosts lost the last home series to India in 2018-19 but Langer said revenge is not on the minds of his players. "The word revenge is never a great word. It is a really great rivalry for world cricket."

He credited the Indian Premier League for promoting a sense of camaraderie and sportsmanship among the players. "I also love the way the game is played. No one can argue that it wasn't exciting cricket (during the limited-overs leg), but it was played in the right spirit through the ODIs and T20s and I hope that remains.

"We will play tough cricket but in the spirit, it's meant to be played. That's one of the benefits of the IPL, I think. The guys get to know each other. There's a good relationship... All things said, I can't wait... Bring it on, Thursday."

The Border-Gavaskar Trophy will be broadcast live on Sony Ten 1, Sony Ten 3 and Sony Six channels.

Promising all-rounder Cameron Green will make his Test debut against India in the series-opening day-night match here if he clears the concussion protocols, Langer said. While Langer has still not ruled out the woefully out of form Joe Burns, Matthew Wade is shaping as a potential opener if Green does not make it.

Green suffered a mild concussion after being hit on the head by a shot from Jasprit Bumrah in the pink ball warm-up match between India and Australia A in Sydney. He was replaced under the sport's concussion rules and has since been monitored by Cricket Australia's medical staff. "If he's passed fit he'll definitely play," Langer said.

"We are just going through the protocols. He had another test this morning which we got good news on. He's a terrific young bloke, obviously an excellent talent, he's earned the right for selection through his performances.

"It's very exciting for Australian cricket for him and his family."

Another call that the home team needs to make is whether to show faith in opener Burns -- who has managed a meagre 62 runs in nine innings this season.

"He is a very good player, you don't lose your talent overnight, he also understands that runs are the greatest currency or value to any player.

"He has been a bit lied on, but we will have a look, get eyes on him today, we will see how he is going, have a chat with him today and we will make our decision on who is going to open in the next day or so," said Langer.

The former Australia player also made it clear that Marnus Labuschagne would not open the batting.

He also said that a decision cannot be made right now on the playing XI.

"We've got to wait and see what happens with Cameron Green first, see if he comes through, so that's one part of jigsaw puzzle. We'll look at Joe Burns and Marcus (Harris) today to see how they are tracking at training.

"We've got to pick our six best (players at the top) and that's all part of the jigsaw puzzle.

"There's a lot of balls in the air, I wish we could be more definite, not only for you guys, but more importantly, for our players. But until we get a few things ticked off we can't make a decision."

NEWS
Australia set to be unchanged for Boxing Day Test: Langer
With star batsman David Warner again ruled out injured, under-pressure opener Joe Burns is set to keep his place at the top of the order