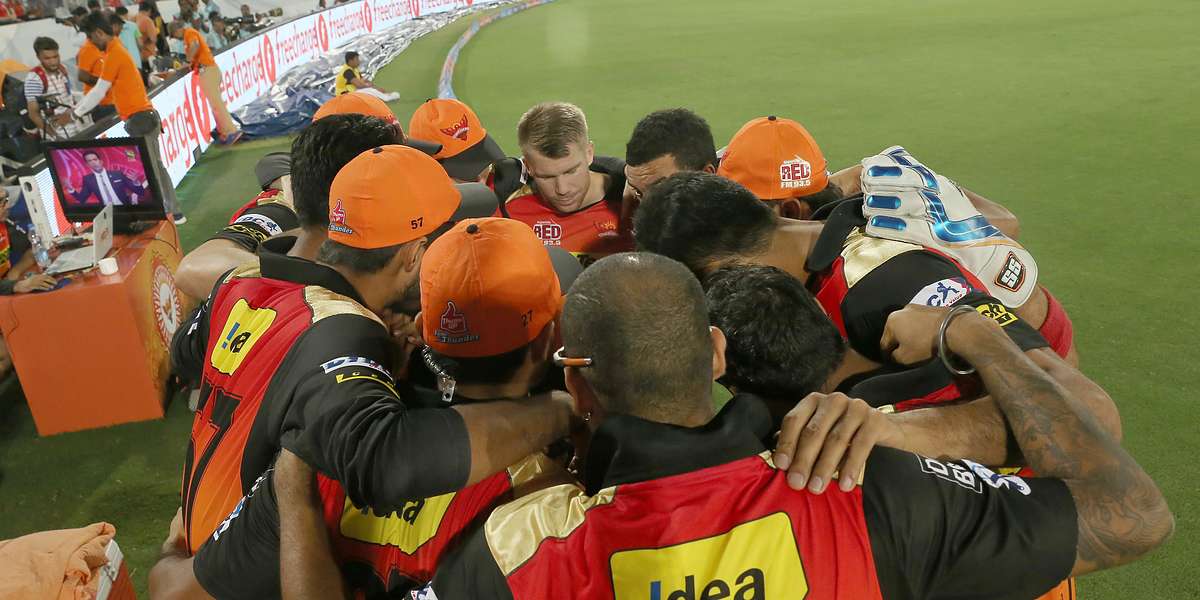 On this day in 2016, Sunrisers Hyderabad defeated Royal Challengers Bangalore to win their maiden IPL title

Finishing fourth, sixth and sixth in their three-year long history as yet, few gave Sunrisers Hyderabad a shot at the title before the 2016 IPL season went underway. They had international stars in David Warner, Aaron Finch, Dale Steyn, Shikhar Dhawan to name a few but did not produce performances consistently enough to emerge prominently in the cut throat competition that IPL is. The underpar show of the preceding franchise - Deccan Chargers in the 2011 and 2012 season - representing Hyderabad didn’t instil much confidence in SRH either.

However, 2016 was the coming-of-age moment for SRH. They did not only make it to the top four for the first time in four seasons, they became the first side to lift the IPL trophy after being placed third or below, winning the eliminator, qualifier and then the final since the introduction of play-offs in IPL. On this day in 2016, they defeated Royal Challengers Bangalore (RCB) in the final to win their maiden title - the side they lost to in their season opener.

The foundation to their first grand season was laid in the auction itself. Instead of spending heavy on big names, SRH invested in some discarded veterans and some emerging talent according to the demand of the balance in their side. They released Kevin Pietersen (who was absent from the 2015 season) and Dale Steyn (featured in only three games in 2015). The destructive duo were replaced by Yuvraj Singh, having struggled for Delhi Daredevils in the previous season, for INR 7 crore and Ashish Nehra for INR 5.5 crore.

But their biggest step ahead was realizing the potential of the young Bangladeshi medium-pacer, Mustafizur Rahman in T20 cricket. Buying him at only INR 1.4 crore which states that he was not a hot property at the auction, SRH found an apt bowling partner for Bhuvneshwar Kumar in the death - an area in which they had struggled in the previous seasons trying names like Trent Boult, Steyn and Praveen Kumar.

His hiring meant that SRH had locked four overs of quality bowling in the death. Their economy rate dropped from 10.5 runs per over in 2015 to 8.9 in the 2016 season. They were the most economical side in 2016 by a fair margin.

While Bhuvi was a little expensive (going at an economy of 9.3), Mustafizur’s miserly economy of 7.5 was only bettered by Delhi’s Chris Morris (7.3) in the season. He achieved that with a mix of accurate yorkers and well-disguised cutters. His yorker which swept Andre Russell off his feet before crashing into the stumps is still fresh in the mind of cricket fans.

In the final, when Virat Kohli and Chris Gayle were going hammer-and-tongs, the SRH skipper, Warner, stuck by his tactics of keeping the final four overs for Bhuvi and Mustafizur, who eventually sealed SRH’s maiden title. Bhuvi won the Purple Cap and Mustafizur became the first overseas player to pick up the Emerging Player of the Year award.

With the bat, it was the Warner-Dhawan partnership that laid a similar impact, albeit at the top of the innings. The southpaws put on 731 runs for the opening wicket - most by any opening pair in the season. On an average, they added 45.7 runs per game for the opening wicket, second only to Kohli and KL Rahul, who opened in only five games. Their strike-rate of 138.2 also made it to the top five opening pairs.

However, there was not much support from the middle-order. Warner plundered 848 runs, Dhawan accumulated 501 runs in 17 innings each but the next best on the list for SRH was Yuvraj Singh’s tally of 236 runs in 10 innings. What makes Warner’s contribution with the bat Herculean is how he made up for the shortcomings of others.

A key aspect of his flourishing opening partnership with Dhawan was him taking the mantle of pushing the run-rate compensating for his partner’s pedestrian approach. Warner amassed 467 runs in the powerplay, the most by any batsman in the season, at a strike-rate of 150.2. At the other end, Dhawan scored 208 runs at a strike-rate of 108.9.

Not only this, the Australian cricketer took care of the run-rate in the middle-phase of the innings as well striking at 148.2, bettered only by Virat Kohli and AB de Villiers amongst the batsman with more than 150 runs in the season.

Warner ensured he batted deep given the unproductive middle-order. In seven out his 17 innings, he batted beyond the 10th over mark - the half-way point in the innings out of which he saw the run-chase through on three instances. Thrice he was in the middle till the 10th over. His unbeaten 93 in the second qualifier against Gujarat Lions was pretty much a single-handed effort with the bat to elevate SRH to the final. Overall, he faced 560 balls in the season.

In the previous two seasons for SRH, the southpaw had scored 528 and 568 runs respectively, but in 2016, he maximized his batting proficiency to unbelievable heights, hammering 848 runs at an average of 60.6 and a strike-rate reading 151.4. It was much like the effort of his opposite number in the final, Kohli, who scored 973 runs in 16 games with four hundreds in the season. The RCB skipper did beat Warner by a margin of 125 runs for the Orange Cap but when it comes to sheer impact, there was little to separate the two.

Alongside the protagonists, there were some crucial contributions from fringe players, none more important than the cameos of Bipul Sharma in the second qualifier and Ben Cutting’s all-round show in the final. Bipul forged an unbeaten 46-run stand with skipper Warner when SRH were 116 for 7 chasing Gujarat’s 162. He was, in fact, the senior contributor in the partnership scoring 27 from 11 balls.

In the final, Ben Cutting, another unknown commodity in the IPL arena, stretched SRH’s total beyond 200. Walking out to bat in the 17th over, Cutting struck 39 from 15 balls. He further dented RCB’s run chase taking wickets of Gayle and KL Rahul.

In the final, all the aforementioned factors came into play for SRH. Warner scored 69 with the bat, Bhuvi/Fizz combined to seal the game in the death and there was the ‘dark horse’ sort of performance from Cutting.

Their victorious campaign in 2016 was quite similar to Deccan Chargers’ triumphant season in 2009. Exceeding expectation levels, they made it to the final under the leadership of an opening batsman from Australia and defeated RCB in the final to lift the franchise’s first trophy.

However, the victory in 2009 was a once-in-blue-moon moment for the franchise which was followed by a series of inconsistent performances in the subsequent seasons. On the other hand, SRH have been constantly banging the door of the playoffs in each of the three seasons since 2017.