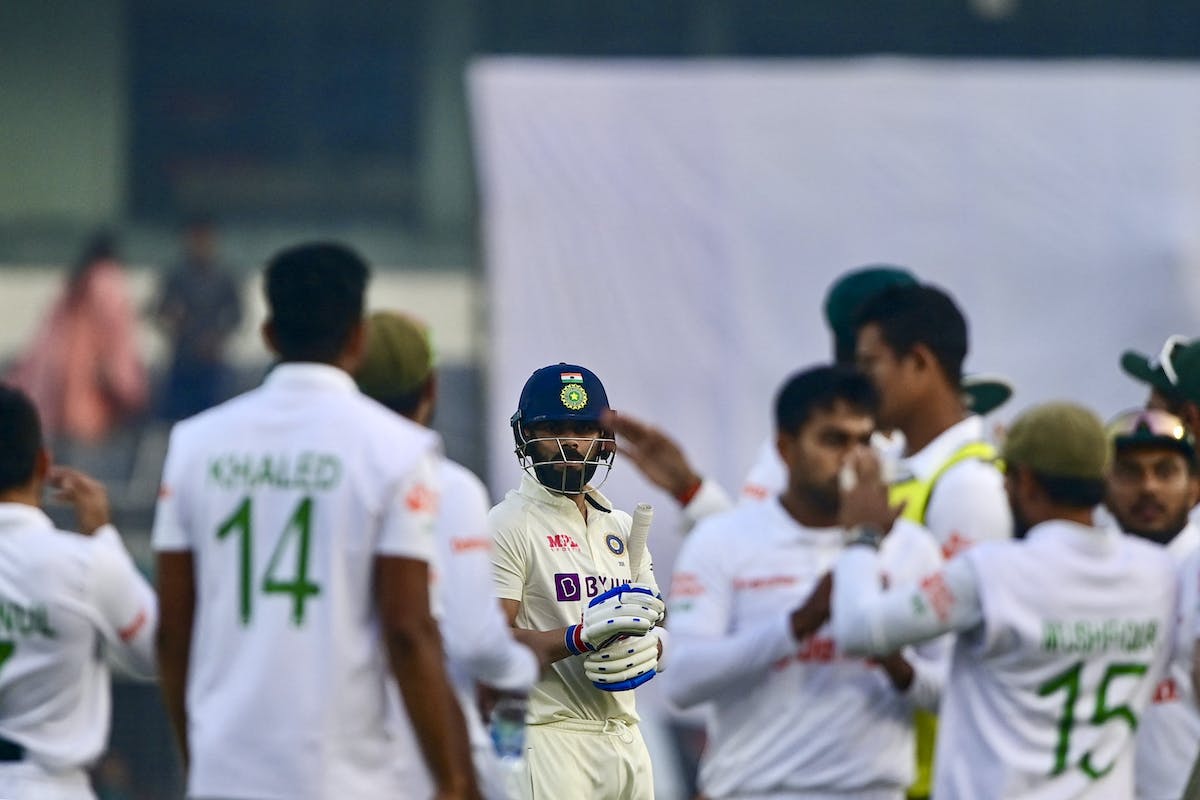 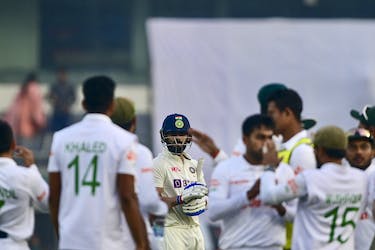 It is a question that probably everyone is asking, where’s that Kohli?

The score is 12/2, there is probably just half an hour before the end of day’s play, the Bangladesh players are in a huddle. They have pinned India on the mat, but during the huddle they are casually looking around the boundary rope to check the incoming batter.

It isn’t Virat Kohli. It is Axar Patel, India’s own nighthawk. Can Shubman Gill and Axar see the day out? Seven overs later, the answer is out: no. Out walks Kohli. There isn’t the usual Kohli walk to the middle of the ground, there isn’t the usual confidence that stems out of the right-hander in the vicinity of Dhaka.

Till Gill’s dismissal, Bangladesh’s modus operandi was with Taskin Ahmed and Mehidy Hasan Miraz. But once they looked at Gill walking back, it was a no-brainer of a decision from Shakib Al Hasan to bring his premier spinner, Taijul Islam from the other end. Kohli lasted exactly 22 deliveries, and none of the 21 leading to the 22nd instilled any kind of confidence. 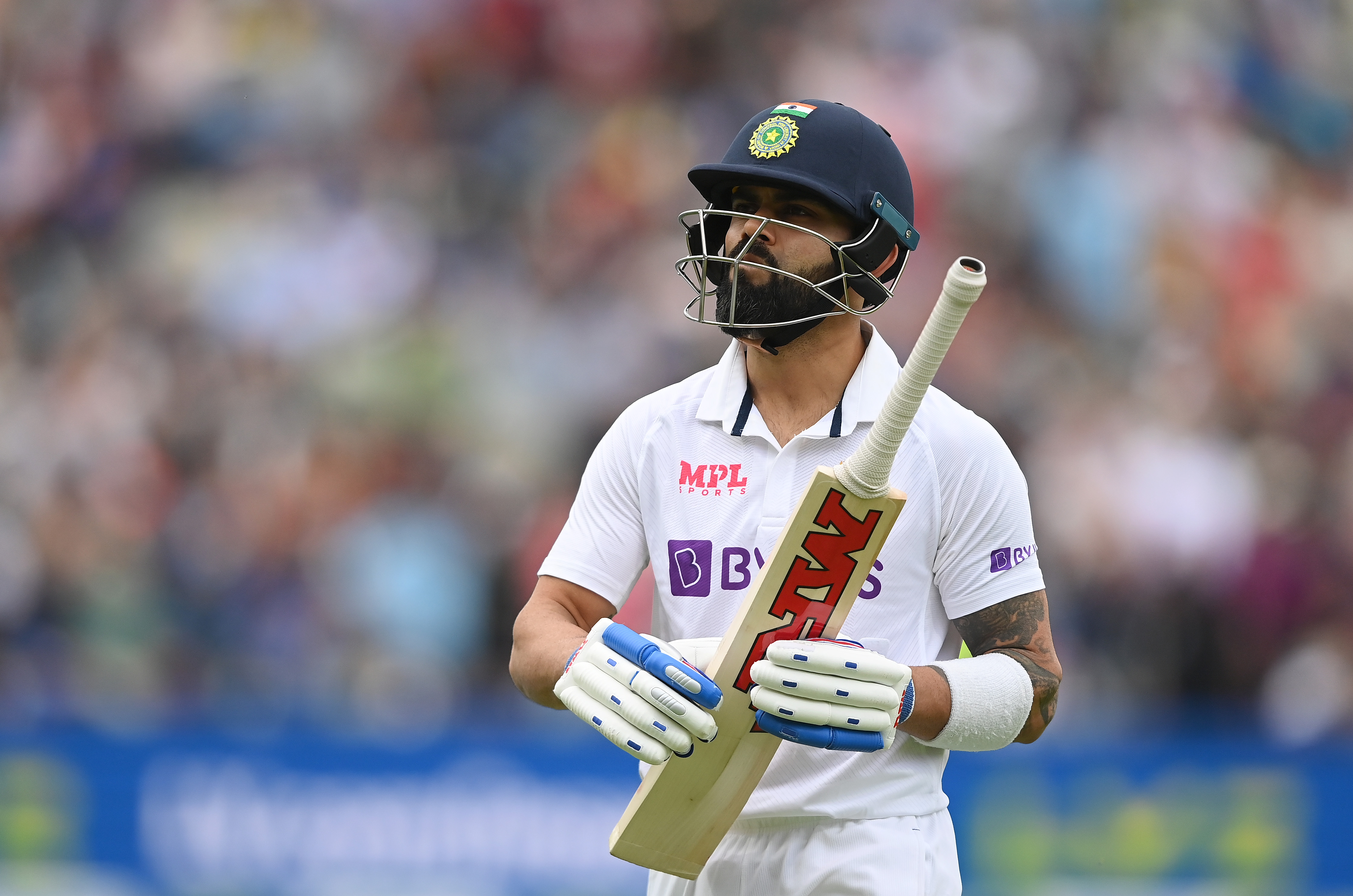 If there was a xA like how football has a xG, the right-hander would be loitering at an all-time low. In fact, if you stretch this way back to 2020 and look at the innings carefully, you would find a familiar pattern.

Kohli’s strength: his game against spin, has also become his kryptonite. His dismissal on Saturday, yet again showcased how worrying his form against spin is, especially with the ticking time for India in their quest to Test greatness.

On a turning track, India tried their best to keep Kohli away from the pressure. But ultimately, his worrying form against spin continued, as he has found himself in an unwanted list – lowest average for a top-four batter against spin in Asia – with an average of just 22.

The worrying aspect is that only Dominic Sibley, Jonny Bairstow and Prince Masavaure average less than him in the last two years. But the continued pattern of his dismissal is what makes it extremely panicky.

There was once a time when Kohli was the ultimate champion against spinners. Leading up to this ongoing slump, Kohli was at the peak of his powers against spin, with an average of 95.3, a phase where none could get past his wrath. 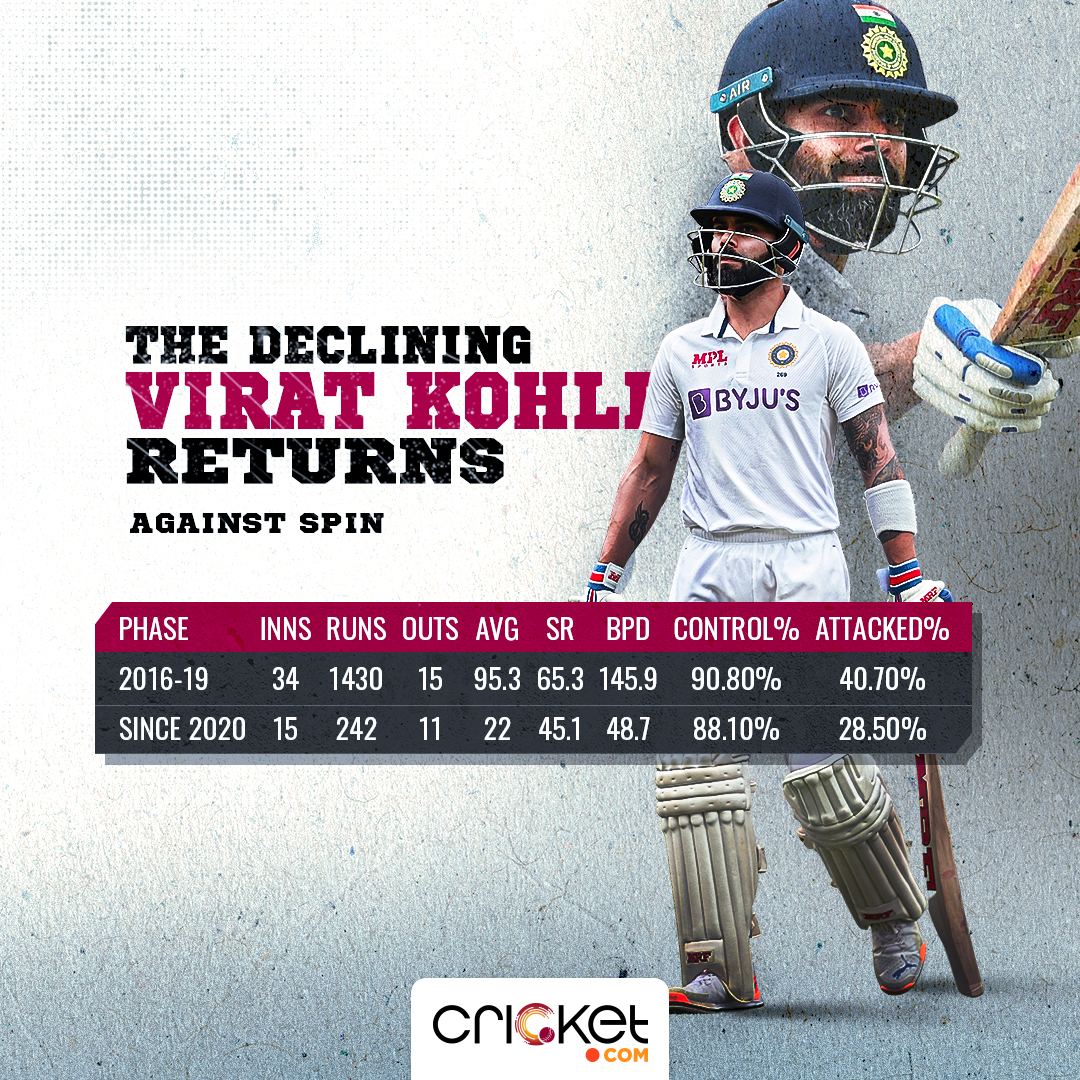 So much so, his attacking percentage in the time period (2016-19) was 40.7, with his strike-rate at 65.3, where spinners had one thing in common: struggle. Kohli has never been without a flaw in his game. But that’s the human part about him, at least from the far-fetched memory. Everything else only puts him in the bracket of the immortals.

It isn’t really the first slump that Kohli has had too in Test cricket, his worry against the ball outside off-stump kick-started a big debate. Some said that he is just overrated, and the others just said that they are overreacting. In between the rated and acting lies the reality, that Kohli was not an immortal, just like Superman during the early hours of Justice League.

The 34-year-old’s last slump is a well-known episode in world cricket. Months after, he went on to score centuries in South Africa, Australia and then ultimately came back to even conquer the English fear of his, but for Kohli to be futile in conditions best known to him is why the worry is real.

In the last two years, the Delhi batter has been undone nine times in front of the wicket to the tweakers, out of his eleven dismissals. There is almost like a pattern of how things fall down spirally for the right-hander in the longest format of the game against the spinners.

The ploy from the opposition too has been pretty straightforward, to attack the stumps, which has led to Kohli playing all over. So much so, the teams playing India in Asian conditions have found it far more comfortable to bowl to the right-hander than the pacers away from home in the time period.

Kohli has once again shown a humane side to international cricket, his frailties against spin. Alongside that frailties also returns his stubbornness, with the choice of shots. Over the last two years, Kohli has only once executed the sweep shot, only ONCE. For a batter, who had an astonishing return in Adelaide, against Nathan Lyon has only played the sweep shot once in the last two years.

All of this coincided with the dipping return, with Kohli going ten innings without scoring a half-century in the longest format. The last time he had such a drought was way back in 2014 during the England tour.

Probably, vintage Kohli will one day turn up and slaughter the hell out of living spinners. Perhaps, he will even employ sweep, reverse-sweep and even paddle sweep to make a mockery of all of us criticizing him. But till then, the numbers live another day to tell a fitting tale.

A fitting tale of a warrior, who now fails in the one thing he was hailed as the greatest of all time, against spin, in conditions that are very familiar to him.