Will Ashwin realistically be able to surpass Kumble? 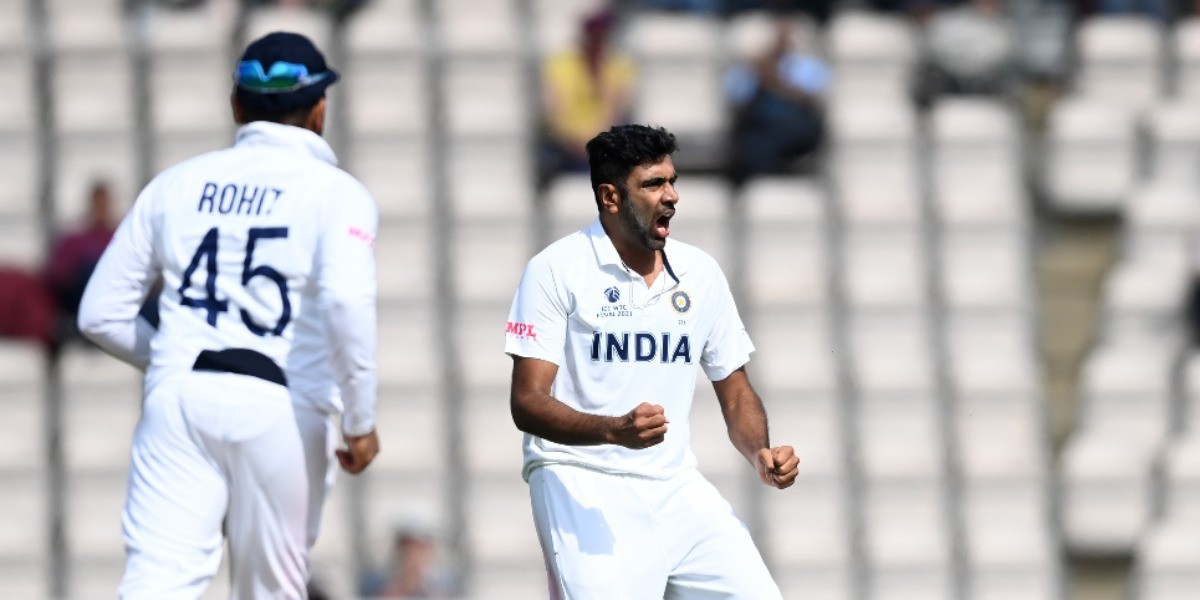 Will Ashwin realistically be able to surpass Kumble?

Currently standing at 427, how long will it take for Ashwin to get to the 620-wicket mark?

But the fact of him being a late bloomer - he debuted in Tests at 25 and was 30 when he took his 200th Test wicket - coupled with injury and fitness issues meant that people tended to be realistic about where he would end up.

350, maybe 400 max, with an exceptional average is what a vast majority thought Ashwin would end up with, and, all things considered, it was always a fair projection.

Well, 35 now, Ashwin has just breached the 425-mark and is now the country’s second-highest wicket-taking spinner in Tests, having gone past Harbhajan. He is 7 away from the great Kapil Dev and remarkably now has an outside chance of potentially overtaking Anil Kumble and becoming India’s highest wicket-taker, ever. 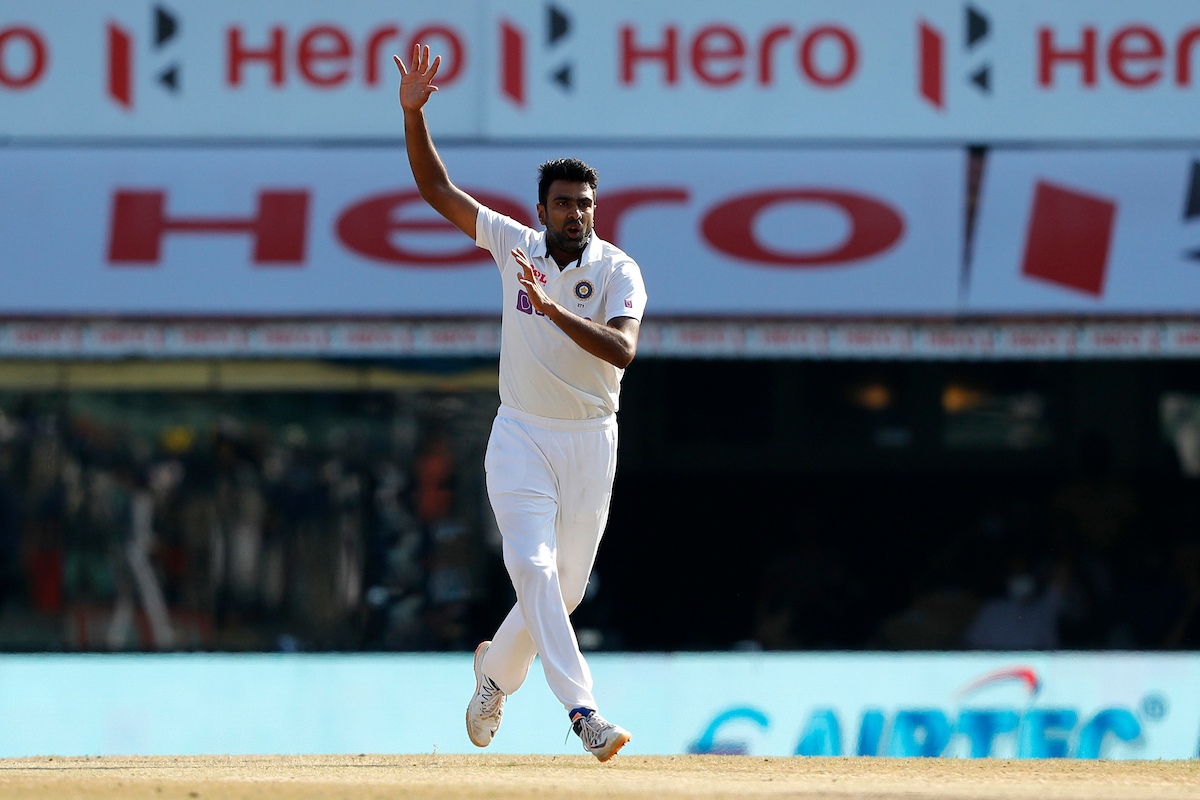 He’s already defied expectations, but with Ashwin now motivated as ever, showing no signs of slowing down, the 620-mark might in fact very well be achievable. So assuming he does not hang up his boots anytime soon, how much more time will it take for Ashwin to become, statistically, India’s greatest ever bowler?

How long Ashwin needs to get to the 620-mark

The magic number for Ashwin is 193. 427 is where he currently stands at, and 193 more scalps is what he’ll need to go past Kumble and establish himself as the most prolific bowler in the country’s history.

In his career, Ashwin has taken an average of 5.27 wickets per Test. This figure stands at an outrageous 6.5 per Test in 2021 but since it is a figure that will be impossible to sustain (between 2017 to 2020, for instance, he took 4.37 wickets per Test) let us stick to the overall 5.27 number that he has accumulated across 81 Tests.

This, of course, does not remain the same everywhere he plays, for the figure is 6.12 wickets per Test at home and 3.96 wickets per Test away, but given we need a fair middle-ground, taking the 5.27 figure as the base works.

Assuming Ashwin keeps taking, on average, 5.27 wickets per Test hereon, he will need 37 more Tests to take 193 more wickets and go past Kumble. That is, Ashwin will be breaking Kumble’s record of 619 Test wickets in the 118th Test he plays (he now is at 81).

This is quite a realistic projection, because, in his last 37 Tests Ashwin has taken 179 wickets at a rate of 4.83 wickets per Test.

Given there has been a spike in his wickets-per-Test ratio since 2019 (5.31), it will not be unrealistic or unreasonable to expect Ashwin to take at least 193 more wickets if he plays 37 more Tests.

The next question now is if he can play 37 more Tests, and if he does, when will it be that he will break the record and become the country’s most prolific wicket-taker.

It took Ashwin 1758 days (or otherwise 4 years and 9 months) to play the last 37 Tests. It is a cycle that started against Bangladesh in February 2017 and ended only last week against the Kiwis.

One can say it took longer than usual owing to the Covid shutdown which saw Ashwin play just 3 Tests in 2020 but still, 4 years and 9 months is a fair estimate for a player of his age to play 37 Tests. Particularly given he is bound to miss a few Tests (particularly in SENA countries) due to combination issues and then a certain others due to rest or injury. Between February 2017 and December 2021, for instance, India played 50 Tests out of which Ashwin missed 13.

Given in his career he’s played roughly, on average, 8 Tests per year, Ashwin should definitely be able to play 37 more Tests if he carries on for five more years.

Taking the 4 years and 9 months duration as the estimated time it’ll take for Ashwin to play 37 more Tests (and in turn take 193 more wickets), then it will be September 2026 by the time he gets to 620 and overtakes Anil Kumble to become the highest wicket-taker in the country’s Test history.

Meaning there is a good chance that, if he carries on at the same pace for the next 5 years in Test cricket, Ashwin could break Kumble’s record during the month of his 40th birthday.

A Mountainous Task, but one that certainly won’t be out of Ashwin’s reach if he decides to keep going.

Mirroring Kumble in more ways than one

With every passing year and every passing series, Ashwin has been taking steps towards catching Kumble but there’s an interesting parallel in both these great spinners’ careers: both Kumble and Ashwin only started drastically improving their records in SENA countries as they got older and wiser.

We know how Ashwin, since 2018, has been a revelation in SENA countries, regions where he struggled early on in his career, but in Kumble’s career too, there was a massive upturn in showings in SENA countries in the latter half of his career.

For the first 11 years of his Test career (that is, until 2001) Kumble averaged 45.3 and struck only once every 114 balls in South Africa, New Zealand, Australia and England, but this number drastically improved from 2002 onwards, with his average and strike rate dropping to 31.76 and 58.5 respectively. 2004 onwards, his SENA numbers were sensational, with him averaging 29.95 and striking at 54.8. 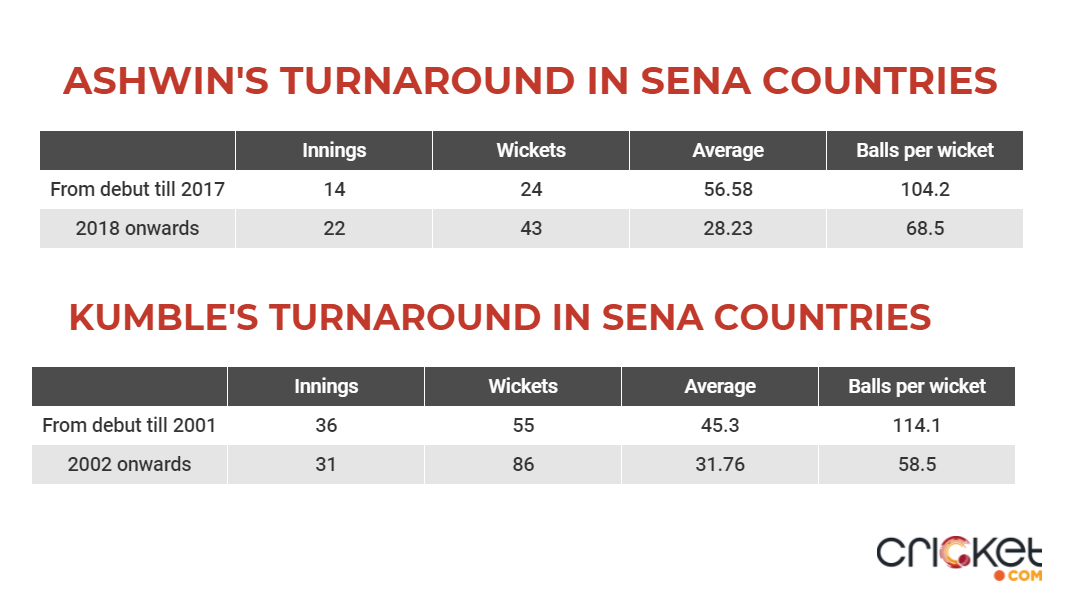 We already know Ashwin has been a different beast altogether in SENA countries since 2018, but it goes without saying that, come the South Africa series, he’ll be eyeing a series-defining performance like the one in Australia.

For inspiration, he needs to look no further than Kumble, who had a series to remember in South Africa in 2006/07, where he ended the tour as India's second highest wicket-taker with 14 wickets in 3 Tests at an average of 24.71.

Ashwin did relatively well the last time India toured SA in 2018 (7 wickets at an average of 30.71) but with South Africa being a country where India have never won a Test series to date, he will know that he can take his already-great career to greater heights through a showing that leads the team to triumph.

All set to play as the lead-spinner in the absence of Jadeja, he has a golden chance to do so. And maybe, just maybe, should Ashwin have a stellar outing in the Rainbow Nation later this month, he might just end up catching Kumble quicker than we’ve projected him to.