Caribbeans no-match for the critical hosts

Sporting metaphors often don’t withstand closer scrutiny, and a hall-of-famer in that category is “the battle of the heavyweights” – used, most lately, for the World Cup game between West Indies and England at Southampton, June 14.

“The battle of the heavyweights” conjures up visions of two strong men, or teams, going toe to toe, slugging it out, battering each other to a standstill. Which isn’t always the case, as witness the first Sonny Liston/Floyd Patterson fight, which got over in 126 seconds, or Mike Tyson knocking out Carl Williams in 93 seconds, or Tyson again, taking just 91 seconds to do for Michael Spinks.

The England-Windies clash had the brevity and inevitability of one of those brutal Tyson bouts. England bowled the West Indies out inside 45 overs without really exerting themselves, and won with 17 overs to spare.

Just to run with the boxing metaphor, here are the highlights in seven “rounds”:

Round 1: I’ll put it out there for what it is worth: Among quick bowlers, Jofra Archer has the most effortless action since Michael Holding. And, like Holding, that very lack of seeming effort lends a lethal edge to his pace -- with no perceptible change in approach or action, Archer goes up and down the pace scale from the low to mid 140s into the 149-150 mark, allied to the ability to obtain serious lift off just back of length.

His contest with Chris Gayle was brief, but spectacular. Gayle, looking to play himself in, had no clue as Archer, with three slips, bowled a bewildering variety of outswingers, incoming deliveries, fuller lengths and shorter lifters with the cross seam.

Gayle played out a maiden against Chris Woakes, then three more dot balls against Archer, before he stole a single to get off the mark, and the strike. There were 26 dot balls in the first five overs that saw the Windies score 8 runs for the loss of Evan Lewis to an inswinging Chris Woakes yorker, and Gayle played out 16 of them.

Then Gayle decided to have his say. He smacked the first ball of Archer’s third over so hard and so straight that the ball came within a toucher of fracturing the bowler’s foot. And next ball, he walked out to an Archer delivery at around 147k and pulled for another boundary. Archer went from 2-0-6-0 to 4-0-22-0 and Gayle had jumped from one off 9 to 19 off 15.

He then turned his attention to Chris Woakes, powering him over long on, then straight back, for sixes. Pity his ambitious attempt to pull the much slower Liam Plunkett over the 80-metre leg side boundary failed just when he seemed to be finding the range of his shots.

Round 2: Nicholas Pooran is just into his fourth ODI, but the 23-year-old bats with the skill, and mental strength, of a veteran. The noticeable quality about his batting is his stillness as the bowler approaches, and the decisiveness of his movement, forward or back on length, as soon as the ball is delivered. Throw in great balance and quick hands through the ball, and it all adds up to a seriously talented 23-year-old.

Shimron Hetmeyer was in no sort of form; his timing was off from the get-go, and he made matters worse by trying to fight against his failings. The more he mishit, the harder he tried to hit, his frustration evident as, for all his huffing and puffing, the ball stayed within the inner circle.

Pooran, with remarkable maturity, controlled a reviving 89 off 99 fourth wicket partnership, after the Windies lost Gayle and the uncharacteristically lackluster Shai Hope within the space of three deliveries. He saw Hetmeyer, Holder and Russell come and go; it took the return of Jofra Archer to finally get rid of him for a well compiled 63 off 78, the only knock of any authority in the Windies innings.

Round 3:  In any format of cricket, there is nothing quite as dangerous as the non-bowler. The Pooran-Hetmeyer stand was just beginning to flourish; Eoin Morgan’s England was feeling some pressure as the fifth bowling options – Adil Rashid, Ben Stokes and Liam Plunkett – were being handled with ease, and it seemed a bit too early to bring back his main strike bowlers.

So, in the 28th over, Morgan tossed the ball to Root for some alleged off-spin and Root, by virtue of keeping it full and wicket to wicket, got away with a two-run over. So he got the ball again for the 30th.

The trouble with non-regulars bowling to settled batsmen is, as a batsman you believe the bowler has no right to be doing what he is, that every ball should disappear from sight. But somehow, it is just never there – not in the right slot, not in the right place… the dots mount, irritation builds, as it did for Hetmeyer. The result: an attempt to clip Root through mid-off, the shot played early as the ball held up on the wicket, and a simple return catch.

So Root got one more over. Jason Holder languidly lofted his first ball straight back for six and you thought, right, that is more like it. Next ball, Holder looked to turn with the spin – only, there was no spin; Root bowled the nearest thing a slow bowler can to a knuckle ball and to Holder’s horror, it popped up off the leading edge for another caught and bowled. Root 3-0-15-2 – who woulda thought?

Round 4: Andre Russell can hit hard, and long. And maybe if his body weren’t held together by rubber bands and hope, he could one of these days play an innings for the ages.

Not today, though. Dodgy knee supposedly rested and match-fit, Dre off the first ball of the 35th over went down on that same knee and swung Rashid high and hard. All eyes were on Chris Woakes making a meal of the catch at deep midwicket, but at the business end Russell was found wringing his wrist – the same one that seemed to trouble him through the recent IPL – and grimacing with pain. The physio came out for running repairs; Dre had another couple of swings, and then holed out. It was as if he figured that he’d swing as long as he could and if he got out, well, what the hell – not quite the attitude you want in your impact player.

PS: Russell managed to stumble up and bowl two overs, and then limped off the field clutching his knee. Déjà vu all over again.

Round 5: England’s strike bowlers were perfect, bowling hard, Test match lengths with two and three slips. Though Wood dropped Gayle off Woakes, and Woakes returned the favour by dropping Russell off Wood, the fielding in general was top class. Fielders in the ring seemed to have telescopic arms; in the deep, Bairstow was as good as having four fielders. In one over alone, batsmen thrice hit to him and called for two; three times Bairstow anticipated the angles, intercepted brilliantly, and kept it down to singles.

You can’t really criticize a team that bowls a quality batting side out for 212 inside 45 overs, but on balance, Eoin Morgan missed a bet. Thanks to Root’s daylight robbery, Windies were 156/5 at the end of the 32nd. Between them, Archer, Wood, Woakes and Plunkett had 21 overs left.

It looked ripe for Morgan to attack Russell and the lower order with his best bowlers – but, instead, he used Rashid and Root in harness for another four overs before finally bringing Wood back on for the 37th – and with his second delivery, the quick took out Russell to a mistimed pull. Then Archer came on, and took Pooran and Cottrell out within two deliveries in the 40th over, and you were left wondering why Morgan took so long.

Between them, Stokes, Rashid and Root bowled 19 for 113, and Rashid contributed 61 of those off his full quota of 10.  Against that, Archer, Woakes and Wood gave away 64 in their 20.4 overs and had 9.2 of their quota left, not to mention Plunkett, who bowled just the 5-0-30-1 spell and had half his quota left. Mishandle resources this badly against stronger teams, and they will make you pay, big time.

Round 6: Everything the England bowlers did well, the West Indies quicks did badly. England’s early lengths were full, in the channel to right handers and slanting across the left handers, with the short ball sparsely used when a bowler wanted to push a batsman back. The West Indies, in contrast, bowled pre-determinedly short, on both sides of the stumps, and allowed England to thrive, gift-wrapping a boundary ball or two every over. Just to rub it in, Chris Gayle was the best of the West Indies bowlers on the day, and that tells you the story.

England 62/0 after ten, and game over right there, with just the tedious formalities left.

Trivia alert: Nine days from now will mark the 40th anniversary of the last time the West Indies beat England in a World Cup fixture – Lord’s, June 23, 1979, in the final of the second edition of the World Cup, then known as the Prudential Trophy.

Round 7: This England team has a self-belief their predecessors have lacked. In the field Jason Roy – third on the list of leading run-scorers in this World Cup -- pulled up with a dodgy hamstring and had to leave the field, leaving a hole at the top of the order. Then Eoin Morgan hobbled off the field with a back spasm.

Small though the target was, losing two such high-impact batsmen can cause the best of teams to stutter – but not this England, which seems to have bought into the Johann Cryuff theory of total football, and applied it to their cricket. One opener out of action? No problem, move number three up. Hole now opens up at number three? No issues, send out number seven, or eight, whatever, just get the job done (in this case, Chris Woakes, who at number three got 40 off 54 in a 104-run partnership for the second wicket).

Joe Root walked out with Johnny Bairstow – and matched the opener stroke for stroke, playing with the sort of freedom he denies himself when he is coming in at one drop. In fact, at the ten over mark – by when England had seen off the threats of Cottrell, Thomas, Russell and Shannon Gabriel, the last-named in the lineup for the first time – Root (36 off 33) had comfortably outscored Bairstow (22 off 27).

You can play with that sense of freedom only when you have the absolute confidence that even if you lose your wicket, there are quality players left in the hut who have your back. And it is this confidence that makes the hosts prohibitive favorites to win its first-ever title.

ANALYSIS
England have the history; Australia have the win
Australia outclassed their arch-rivals to seal a 64-run victory 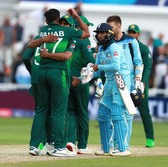 ANALYSIS
England can bat, bowl, and field
England started their World Cup campaign with a thumping victory against South Africa