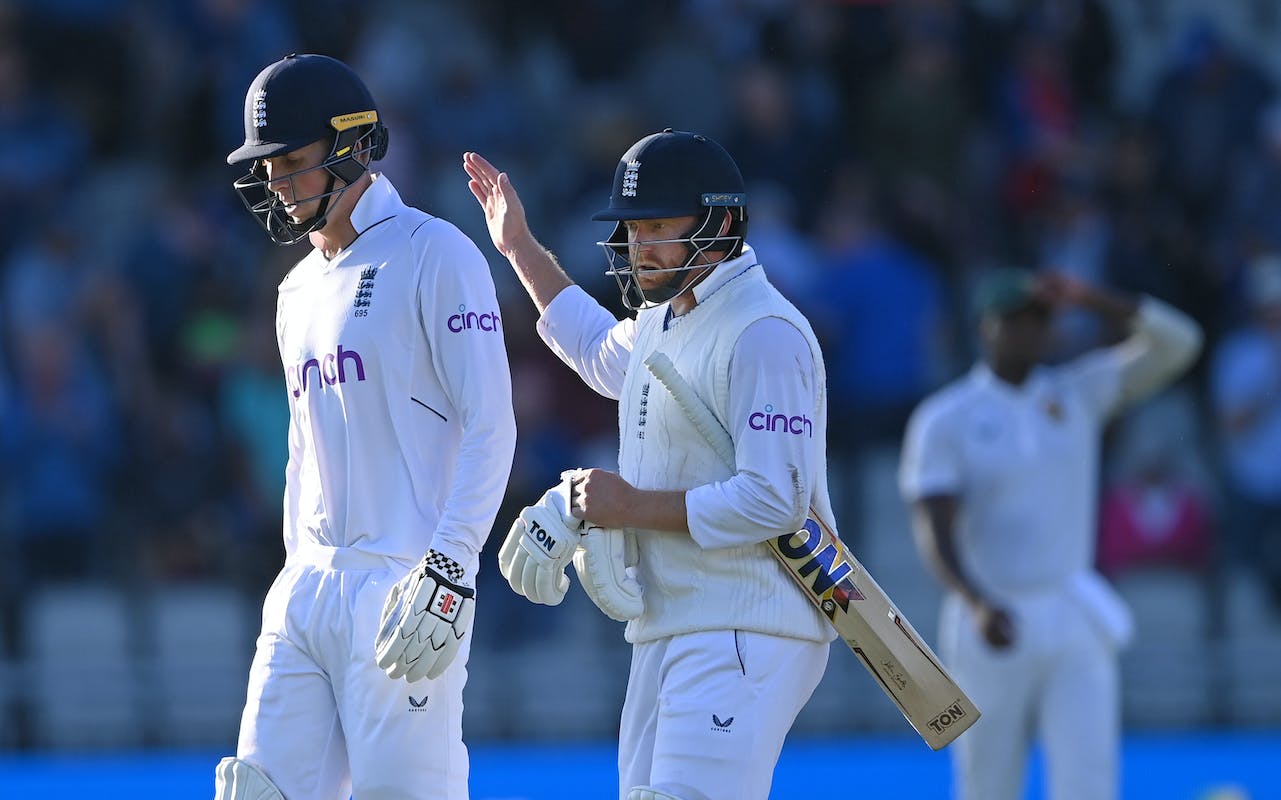 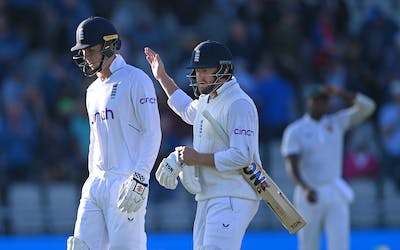 England great James Anderson marked becoming the first player to appear in 100 home Tests by leading the attack with three wickets as South Africa were dismissed for just 151 on Thursday's first day of the second Test at Old Trafford.

Kagiso Rabada starred with both bat and ball as the Proteas fought back. The fast bowler top-scoring with 36 and then dismissed star batsman Joe Root for just nine as England, bidding to level this three-match series at 1-1, slumped to 43-3.

But by stumps, England had recovered to 111-3, a deficit of 40 runs, with struggling opener Zak Crawley surviving to be 17 not out off 77 balls.

By contrast, Jonny Bairstow was 38 not out off 45 balls, including six typically well-struck fours, during an unbroken stand of 68 with Crawley.

South Africa's innings ended in sunshine, but the improved batting conditions initially did England little good, with Alex Lees, caught behind off Lungi Ngidi before Ollie Pope, who made a promising 23, was clean bowled by a 90 mph delivery from express quick Anrich Nortje.

Rabada then dismissed Root for his third low score this series, although first slip Sarel Erwee needed four attempts to hold the outside edge.

Anderson, who has now played in 97 Tests in England and three in Wales, had earlier made the initial breakthrough when -- bowling from the end named after him on his Lancashire home ground. He removed Erwee during a morning session where the Proteas slumped to 77-5 at lunch.

But Rabada and Nortje (10) checked England's progress with a ninth-wicket partnership of 35.

That stand ended with the very first ball after tea when recalled seamer Ollie Robinson had Nortje lbw before Rabada was the last man out after edging left-arm spinner Jack Leach to Root at slip.

South Africa captain Dean Elgar, with the Proteas top of the World Test Championship table despite a fallible top order, took a calculated risk in batting first upon winning the toss despite overcast conditions that favoured fast bowling.

His thinking was influenced by the recall of off-spinner Simon Harmer in place of left-arm quick Marco Jansen, unfortunate to be dropped in the only change to the team that overwhelmed England by an innings and 12 runs in the first Test at Lord's last week. The pitch is expected to offer more turn later in the game.

Anderson struck in just the fifth over when Erwee, fresh from a fine 73 at Lord's, was well caught by diving wicketkeeper Ben Foakes off an inside edge for three.

Fellow opener Elgar had a couple of reprieves before he fell for 12, with Robinson, in for Matthew Potts in the only change to England's side at Lord's, denied his wicket by a marginal no-ball.

Stuart Broad, on as first change, twice beat Elgar before he dismissed him, Bairstow holding a good low catch at third slip. Broad then removed Keegan Petersen (21) with another catch in the cordon during a return of 3-37 in 11 overs.

Stokes (2-17) got in on the act with just his third ball when Aiden Markram (14) top-edged a pull to Foakes before Rassie van der Dussen (16) was lbw after the all-rounder's raucous appeal was confirmed on the batsman's review.

Anderson, yet to take a hat-trick in an illustrious career that has seen him become the most successful fast bowler in Test history, went close on Thursday. He had Harmer and Keshav Maharaj plumb lbw with successive deliveries only to spear the hat-trick ball, to Rabada, well down the legside.