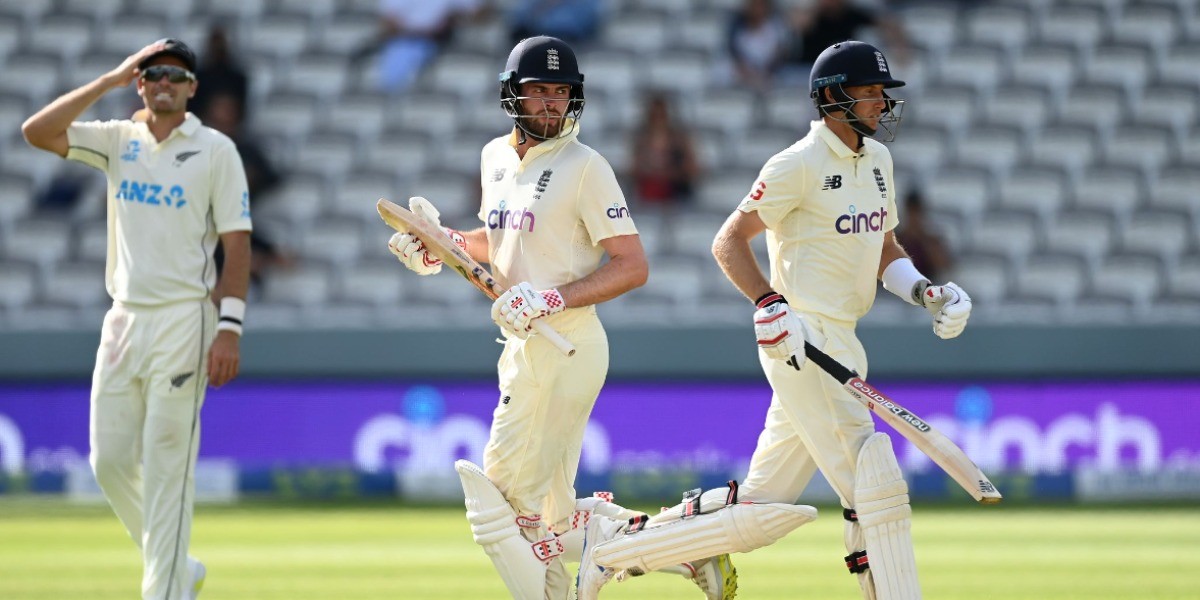 The final day of the first Test between England and New Zealand started amidst a thin cloud cover and a lot of promise. All three results were a possibility and New Zealand’s fresh approach brushed aside the old-fashioned Test cricket for a possible grand finish.

Having scored only 62 runs in 30 overs yesterday, New Zealand put the foot on the paddle quite early in the morning session. Ross Taylor was the first to show signs of aggression when he attempted a few swats through mid-wicket in the first half an hour or so. A sailing six over mid-wicket rekindled memories of the vintage Taylor.

The Kiwis scored 107 runs in the morning session. Although, it was a shortened session - only 22.3 overs were bowled when the umpires opted for an early lunch due to rain - New Zealand went through with the declaration, setting England a target of 273 and giving themselves 75 overs to grab 10 wickets.

England, however, never went after the target and kept the shop shut. A prime reason could be the way New Zealand started with the ball. The ball swung for a major part of the post lunch session and Dom Sibley and Rory Burns opted for survival. The pitch also showed variable bounce on a few occasions, rearing up on Burns from good length. Then there was an experienced middle-order. In the absence of Ben Stokes and Jos Buttler, England were missing fire-power in the order. Also, no one except Joe Root had played over 25 Tests in their batting ranks.

England’s approach was championed by a resistant third wicket stand between Dom Sibley and Joe Root. They batted out 25 overs - one-third of the number of overs they had to bat - keeping the visitors at bay. The rescue act arrived when New Zealand had struck twice in quick succession, keeping their hopes alive. While Root scored 40 off 71 balls, Sibley batted through the innings to remain unbeaten at 60 off 207 balls.

Sibley absorbed all the pressure created by the Kiwi bowlers at the start of the innings. Kyle Jamieson began with five maidens in a row and tried to get Sibley out the same way as he did in the first innings but the right-hander had all the answers this time with his stoic defence. He scored at a strike-rate of only 13.5 in the channel just outside the off-stump and 11.5 when the ball was further away. 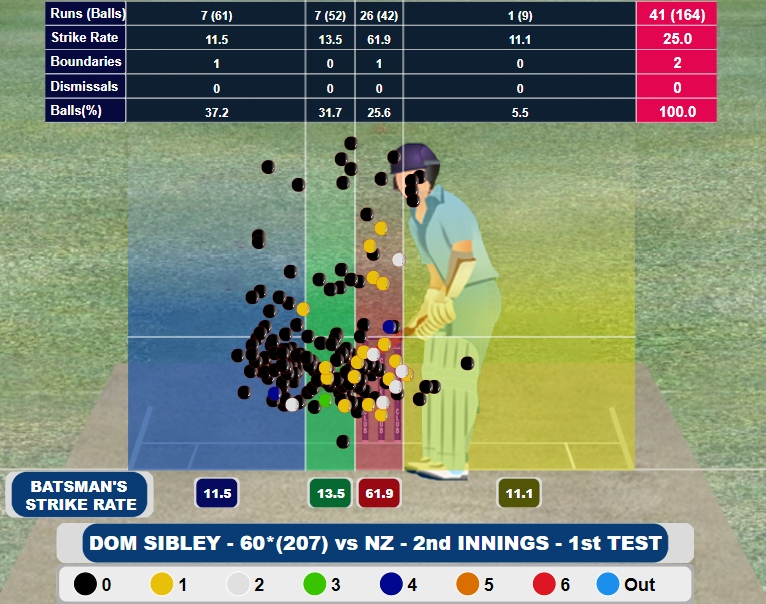 The only bowler who tested Sibley was Neil Wagner. The left-arm seamer bowled an uncharacteristic first spell where he first broke the opening stand, which had carried on for 23 overs, and then troubled Sibley. A regular exponent of short ball, Wagner aimed to exploit the lateral movement on offer.

From 2018 until the start of this Test, Neil Wagner had pitched 24.9 percent of his deliveries in the short-length area, ie, every fourth ball was a short ball. In his first spell, which read 10-6-9-1, he bowled only one short ball. 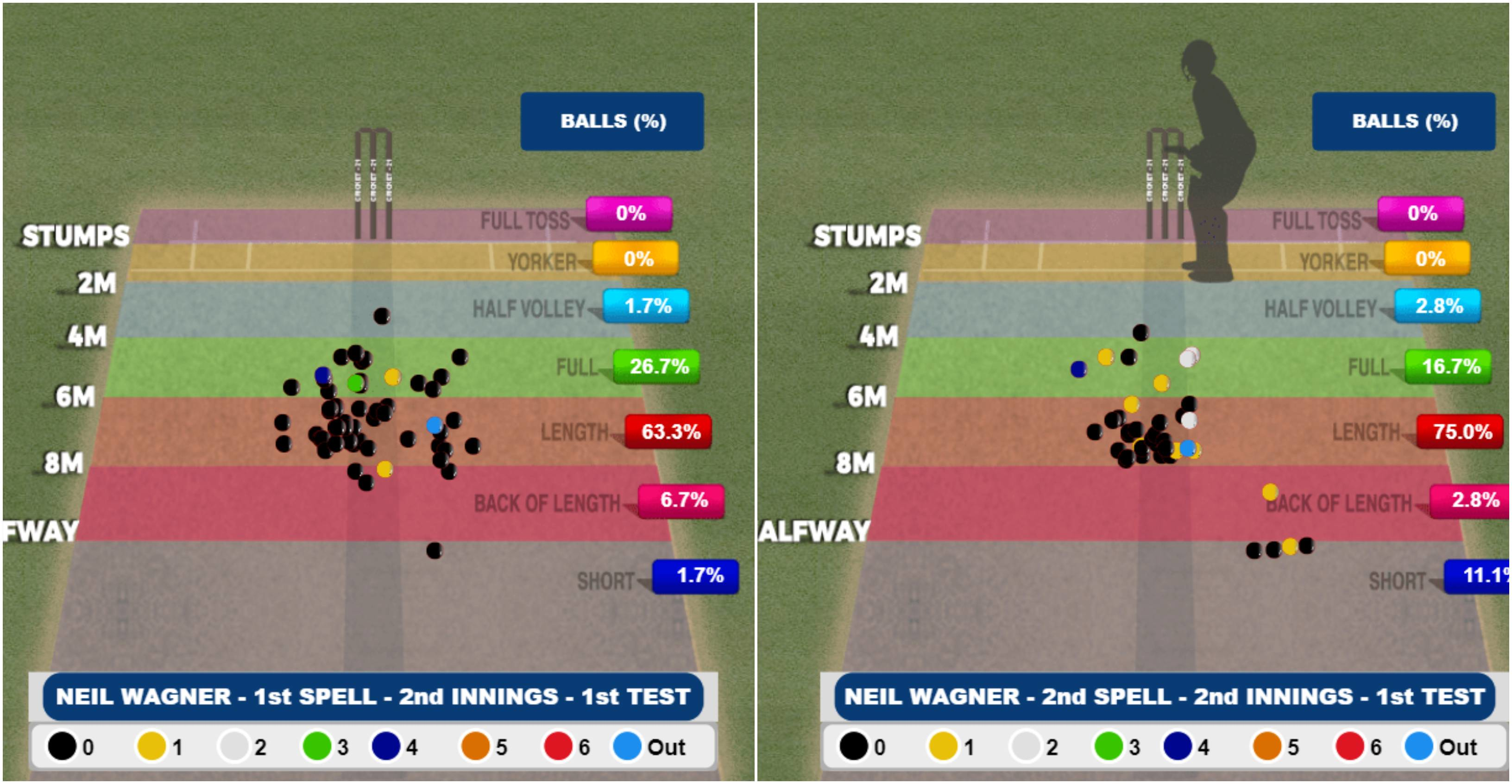 He shaped the ball away from Burns to find his edge and regularly challenged both edges of Sibley’s bat. He got him to edge as well but the ball went past a flying Tim Southee at second slip.

New Zealand would also rue not making the England batsmen play enough. As it can be seen from Sibley’s shot zone, he received a majority of deliveries from pacers way outside the off-stump. Out of the 61 balls he received in that zone, 40 were left alone.

When Wagner pinned Root to break the third wicket stand, New Zealand hoped for a collapse. When the final hour was announced, opening up the option for Kane Williamson to offer a draw, England were 127 runs away from the target and New Zealand in need of seven wickets. The Kiwis still wanted to have a go as there was an outside chance with England’s thin-on-experience batting line-up.

Williamson tried everything but Ollie Pope stayed with Sibley. None of them offered even half a chance a chance on what seemed better batting conditions than in the previous session and the two teams shook hands with five overs to spare.

If not for a washed out Day 3, the Test match assured a result with an enthralling end. For now, the two-match series will move to Edgbaston, July 10 onwards. 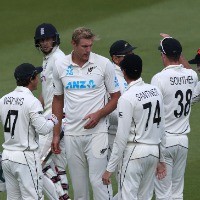 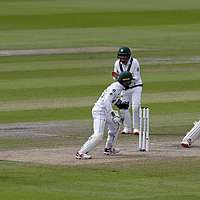 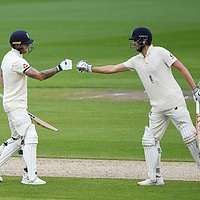