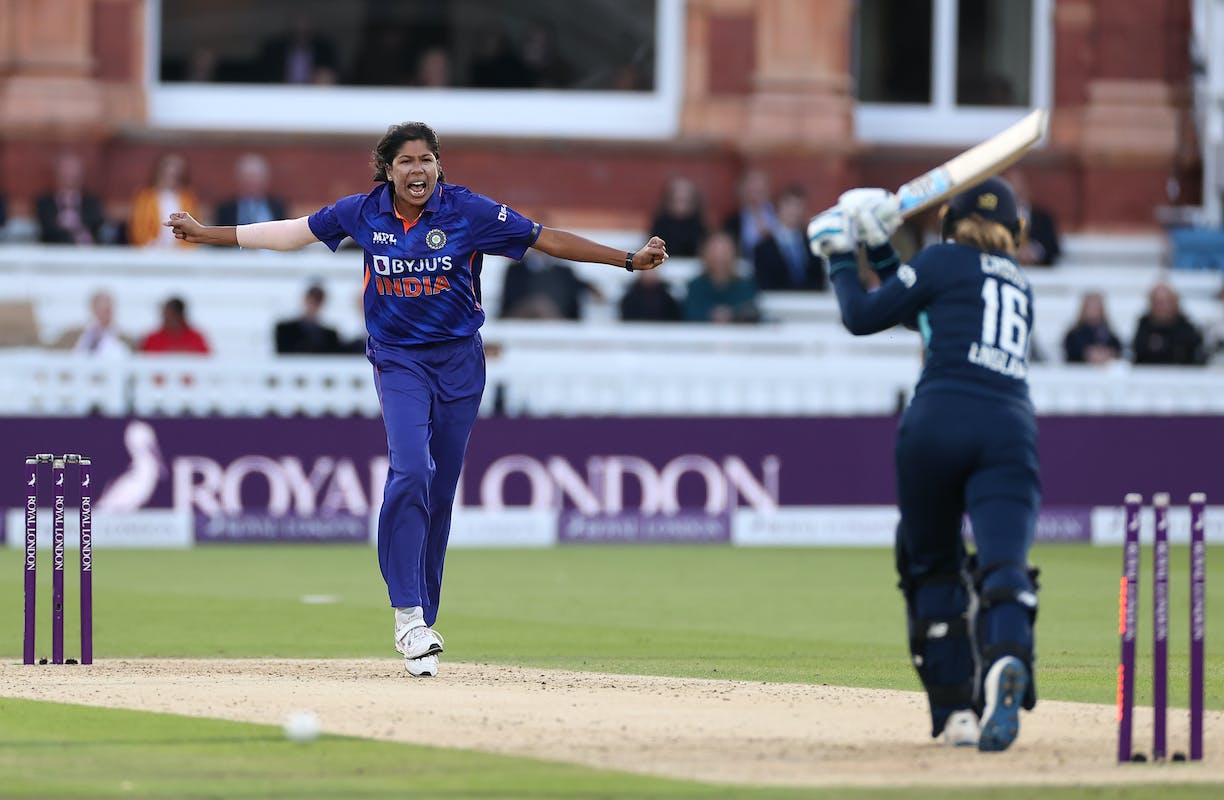 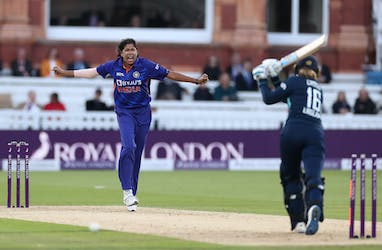 The one who changed the face of women's cricket and ignited a fire among kids, Jhulan Goswami, bids adieu to the sport after two decades

If only words could do justice to the emotions felt at Lord's.

It was a sombre Saturday for all the fans of women's cricket as one of the legends of the game, Jhulan Goswami, was all set to feature in the final match of her international career at the Home of Cricket.

A long huddle before the start of play by the Women in Blue, with members of the team sharing their experience of playing with the stalwart. What seemed like a fun interaction among the players reminiscing the good old days ended with the video that managed to break the internet a few hours later as Harmanpreet Kaur was in tears minutes before the toss.

For most of the people in the dressing room, Goswami has been either the captain or a role model while growing up and to witness their childhood hero bow out from the game on a momentous occasion and in front of a capacity crowd multiplied the magnitude of the emotions.

It was befitting for Harmanpreet to have Goswami at the toss as she literally handheld her during her initial days of international cricket and mould her into the player the world witnesses and celebrates today.

With tears rolling down, it was time for some live-action to begin as England opted to field first, giving Goswami a bit more time to settle her nerves after an emotional morning at Lord’s.

India endured a nervy start to the innings and were tottering at 148 for seven when Goswami walked in to take centre stage. Lord’s stood up in appreciation for one of the stalwarts of women's sport, and the young England players, led by Amy Jones, gave her a guard of honour.

For over 20 years Jhulan Goswami has run in, hit a length and blazed a trail.

She has bowled nearly 10,000 balls in ODI cricket, and she may just have inspired as many young girls to try cricket.

She was all welled up as he joined her fellow Bengal teammate, Deepti Sharma, out in the middle. However, not all fairytales have a fitting end as the 39-year-old was dismissed for a golden duck, drawing an end to her career with the bat.

With only 169 runs on the board, the job was not done yet, and India needed Goswami more than ever to clean sweep a lackluster England side. And it was time for the final three hours of her career as the Indian players gave her a guard of honour as she walked out for one last time.

"All our efforts in this series will be for Jhulun Goswami."

In a press conference earlier in the series, Smriti Mandhana revealed how special the Women in Blue wanted to make this for the speedster and Harmanpreet sobbing in the huddle; it showed how much it meant to this young Indian side.

A few tears behind the sunglasses would be an understatement as the Women in Blue walked her to the bowling mark, and it was time for the run chase to get underway.

A few deep breaths in and glances up to the sky, it was business as usual for Goswami as she started with a maiden. In the next three hours that followed, Indian cricket could witness the change of guard as Renuka Thakur wreaked havoc to scalp four wickets in the second innings to dent England. It was a symbolic passing of the baton.

However, in a low-scoring game, with Charlie Dean and Kate Cross ticking ahead in the middle overs, the Indian skipper brought back her premier bowler in Goswami. Two balls into her final over of international cricket, she bowls an absolute ripper to Cross that crashes on the middle stump to power India on a cusp of a clean sweep.

Four balls left and one wicket required, can she have a perfect end to her career?

But, alas, that wasn't to be as Freya Davies defended the remaining deliveries with absolute surety to deny the legend a fairytale end. The firm push on the final delivery on the stump by Davies resulted in the veteran seamer drawing curtains to her two-decade glittering career.

With each member of the team running towards Goswami and applauding her contribution to the sport, the Home of Cricket once again gave her a standing ovation as she bowed out of international cricket with a couple of scalps in her final outing.

In a country where women's cricket was struggling for basic facilities and identity in the early 2000s, Jhulan Goswami made her international debut against England and vowed to change the face of women's sport.

A 19-year-old girl hailing from Chakdaha village in West Bengal donned the national cap for the first time against England on 6th January 2002 in Chennai and the rest, as they say, is history. 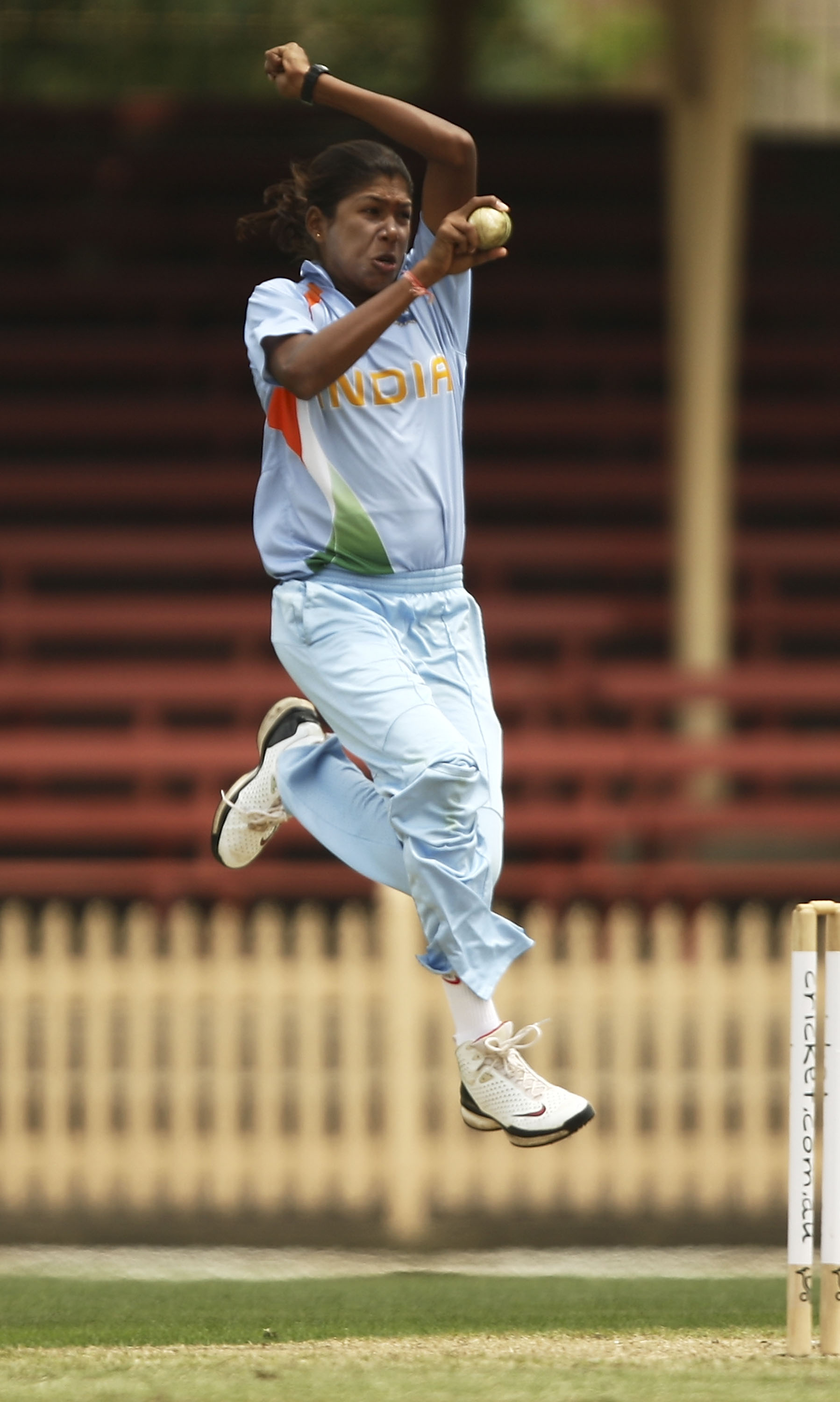 It not only helped India unearth a special talent but also scripted a new leaf in the history of Indian cricket.

Also read: Jhulan Goswami: An inspiring journey of two decades between the 22-yards

Over two decades of ruling the world stage with her immaculate line and length, Goswami has shattered numerous records along the way. However, the one thing she might be incredibly proud of is her ability to rekindle the fire among young kids to take up the sport when they once felt there wasn't any future.

Two years ago, a kilometre away from where I am penning this down, and right in the heart of Bengaluru, the Chinnaswamy stadium was buzzing with excitement as Bengal were set to take Mumbai in a must-win clash of the Senior Women's One-day trophy.

Two heavyweights of domestic cricket locking horns, it could not get better than this as the teams warmed up for the high-voltage clash. For someone I have admired growing up and possibly the reason I continue to follow my passion for the sport, it could not have gotten any better as I walked alongside Goswami for the all-important toss.

A distinctive aura beckons you as the tall pacer walks out with thunderous applause from the crowd. While the game was played with fierce competitiveness from both sides, it was business as usual for Goswami as she spoke at length to our fast bowlers post the completion of a hard-fought contest.

With each word absorbed to the absolute T, it was a happy ending for us as we learnt the nuances of the game from the greatest player in the history of women's cricket. And this ain’t the only time she has shared her knowledge with the domestic players.

If you’re an ardent follower of women’s cricket, you can always witness Goswami talking to members of the opposition ahead of their net session or after the game and explaining to them the nitty gritty in the art of bowling.

While her contribution on the field is second to none, one of the qualities that often goes unnoticed is her ability to groom players and guide them through thick and thin.

There ain't any record that has not been breached in women's cricket by the pacer, but more than the records, she has inspired a generation to dream big and follow their passion.

And on behalf of thousands of kids, who dreamt of bowling fast and emulating her heroics, a big thank you to Goswami for leading the way in a tunnel full of darkness and lighting it up with her constant guidance.

While images of Harmanpreet having tears in her eyes in a team huddle sent social media into a frenzy, the skipper paid a perfect tribute to Goswami in the post-match presentation.

"When I made my debut, she was a leader. I told her when I was going through the best time, people supported me, but when I was in a rough time, she was the one who supported me," she said.

As Goswami walked out for one final time, it was fitting that the player who made her debut under her captaincy was at the helm leading a new-look Indian side.

And after two decades of an undying passion for the sport, she finally draws curtains on her illustrious career that not only shaped the players in the Indian dressing room but also created an impact among thousands of players plying their trade on the domestic circuit.

Women's cricket, rather Indian cricket, is blessed that she is among us, and we hope she can contribute to the game beyond the 22-yards in the future.