A tale of two captains 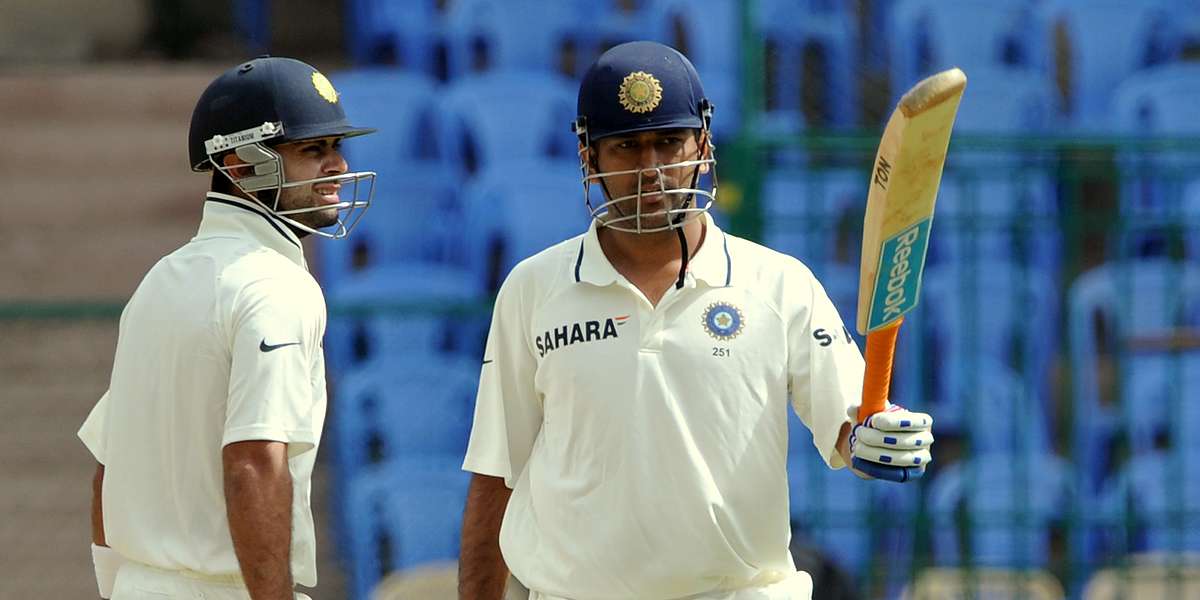 A tale of two captains

Twelve years to this day, Dhoni took the field as India’s Test captain. The side has become the number one ranked Test team in the world thrice since.

It was the eve of the series decider against South Africa in 2008. Going into the decider with 0-1 down in a 3-match series, the regular captain, Anil Kumble, ruled himself out due to an injury. By this time MS Dhoni was the captain of India in white-ball cricket. With the old guard entering the last phase of their career, the inevitability of an era under Dhoni was near.

Losing the toss on a pitch that turned from day one, dented India’s chances a little. However, none knew then that the man now leading them is unparalleled at directing the spinners from behind the wicket on tracks that assisted them. India defeated the Proteas with relative ease, chasing down a target of 62 in the fourth innings and avoiding a series defeat at home.

Journey to the pinnacle and back

It had come as a surprise when Greg Chappell predicted Dhoni as India’s future captain at the beginning of his international career. Initially cherry-picked to lead a rookie squad in a tournament that the senior cricketers did not fancy, Dhoni ignited the hopes of the nation famished for white-ball success. His captaincy coincided with the advent of the Indian Premier League and a focus on the 2011 Cricket World Cup. By the time the World Cup was over, India were brimming with success across all formats.

Under Dhoni’s realm, India were unbeaten in the first 11 Tests in almost two years. Carrying the fire ignited by the captains before him, Dhoni’s India continued to compete away from home. Soon after winning a Test series in New Zealand and beating Sri Lanka at home in 2009-10, India became the number one side in the world in the ICC Test Rankings.

After a few hiccups that followed when India lost a Test to South Africa at home and to Sri Lanka away, India lost the top spot for a brief duration. They earned it back after white-washing the then number one team, Australia, 2-0 at home in October 2010.

For a line-up filled with modern-day greats, the success of the team during this era was largely due to its batting prowess. However, like a fire evaporating in the underbelly, things started to turn in an awkward direction for the Indian batsmen after the 2011 World Cup. 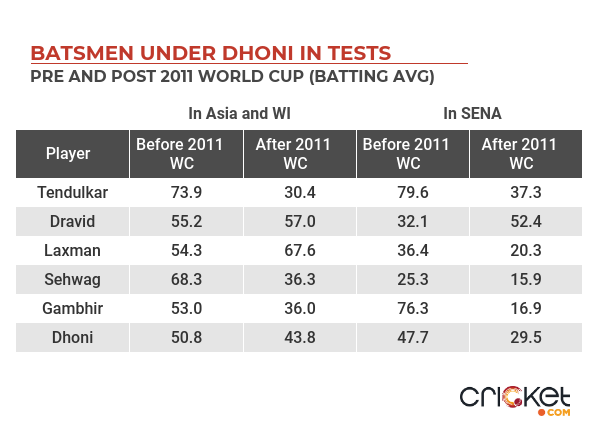 Under Dhoni, batsmen like Sachin Tendulkar and Gautam Gambhir averaged above 50 in Asia, West Indies and SENA countries till the 2011 World Cup. Post that, their performance dipped along with that of other players like Virender Sehwag and Dhoni himself. The two batsmen who were not part of the white-ball equation anymore were unhindered - Rahul Dravid continuing to perform at home and away and VVS Laxman holding fort in home Tests.

With not enough runs on the board, the bowling arsenal identified by Sourav Ganguly and nurtured by the captains that followed fell short in making up for the batsmen’s shortcomings. 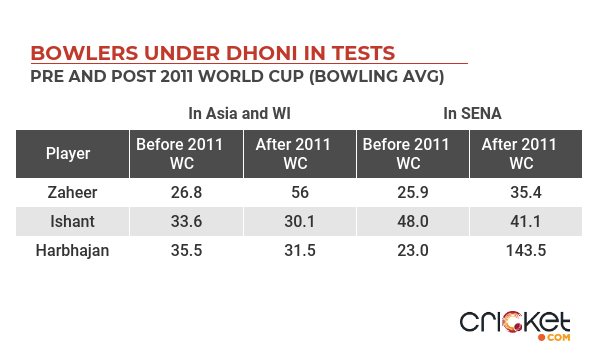 India capitulated in England and Australia – whitewashed in a 4-Test series on both occasions- in 2011-12, post which Dravid and Laxman decided to hang up their boots. To make matters worse, a side in a rebuilding phase lost 1-2 to England at home. As the batting continued to let India down in away tours that followed, India were down to number 7 in the Test rankings by the time Dhoni decided to move on from Test captaincy and his Test career along with it.

Dhoni is one of the most loved captains in India. While in white-ball cricket, he seems in control at every point in the game, he had a reputation of being conservative in Tests - chasing the eight-ball often, especially in away conditions that did not allow him to use his spinners effectively.

In the first decade of 2000s, India were producing left-arm pacers for fun. But, when Dhoni really needed some help in the pace department with his batsmen not firing, he was left with no other choice than being defensive.

The successful Test teams have a fast bowling department of 4-5 interchangeable options – similar to what India have right now. In search of a quality option, Dhoni tried as many as 15 pace options in Tests after the 2011 World Cup, including himself, exemplifying the lack of resources. Before the World Cup, he took the team to number one with just six pace bowlers.

“We need a bit of time. It’s a new side, not everyone is experienced. Over the last six months, they are getting better. It is a matter of time before we start delivering.” This was all Dhoni could say after his last Test, just before announcing his retirement.

There were two visible differences after the change of guard as Virat Kohli took over as India’s captain towards the end of 2014. First, unlike Dhoni, Kohli was leading from the front with the bat, fitness standards and an aggressive body language. Secondly, in the Kohli era is the contribution of pacers – home and away – became significant. While the contribution from the batsmen overall has remained more or less the same, it’s the bowlers that have helped the team turn their fortunes around. 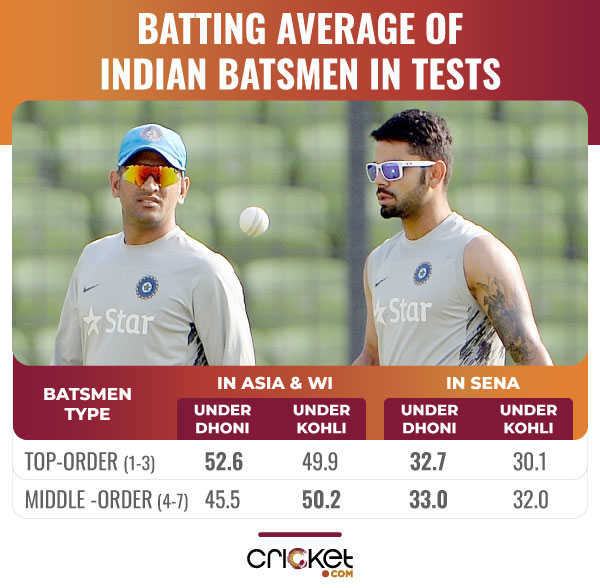 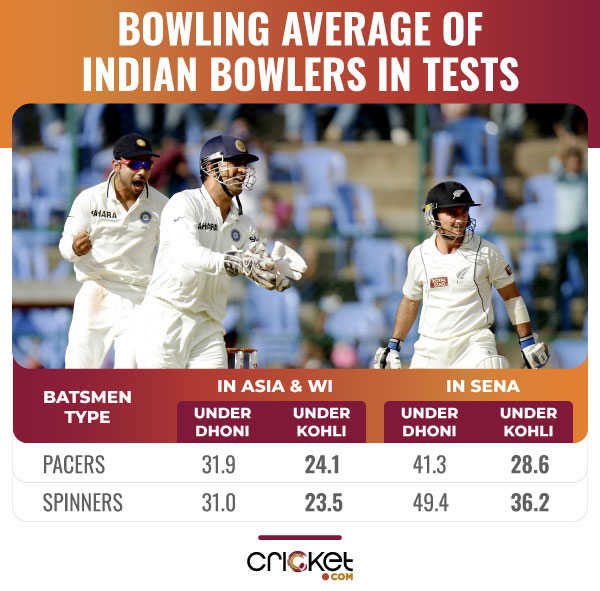 While most of India’s Test specialists have let the team down with the bat in recent years, especially away from home, the pacers have re-invented themselves under a captain who is vocal about his love for Test cricket and a coach that wants to ‘put the pitch out of the equation’.

After a season for Sussex under their coach Jason Gillespie, Ishant Sharma is bowling fuller and more effectively. Inspired by an expressive captain, Mohammed Shami is fitter and relentless. Ravichandran Ashwin and Ravindra Jadeja are now wiser while Jasprit Bumrah is the face of the Indian pace attack. Together, these bowlers keep India in the hunt while delivering a knock-out punch whenever the batsmen are able to put enough runs on the board – like they did during the tour of Australia in 2018-19. 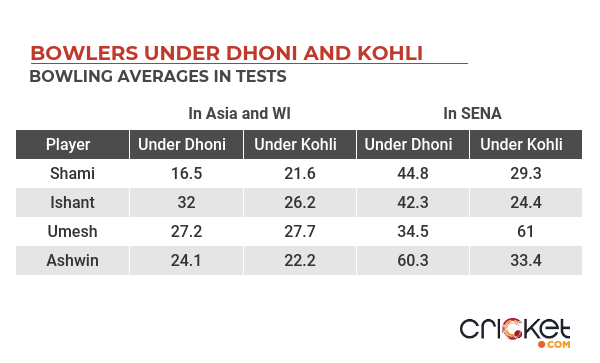 Kohli’s era started with heart-breaking losses in Adelaide and Galle after which a string of home series provided the team the time to rebuild. By September 2016, at a time when all the sides were winning only at home, India once again jumped to the top of the ICC Test Rankings - after India beat New Zealand at home - and have retained their place since.

Through the Elo algorithm devised by Devashish Fuloria, a cricket writer and researcher, it is easy to assess how the Indian team performed under the two captains relative to the number one side during this period. While the team under Dhoni faced its crests and the worst troughs, the team under Kohli has largely followed an upward trajectory. 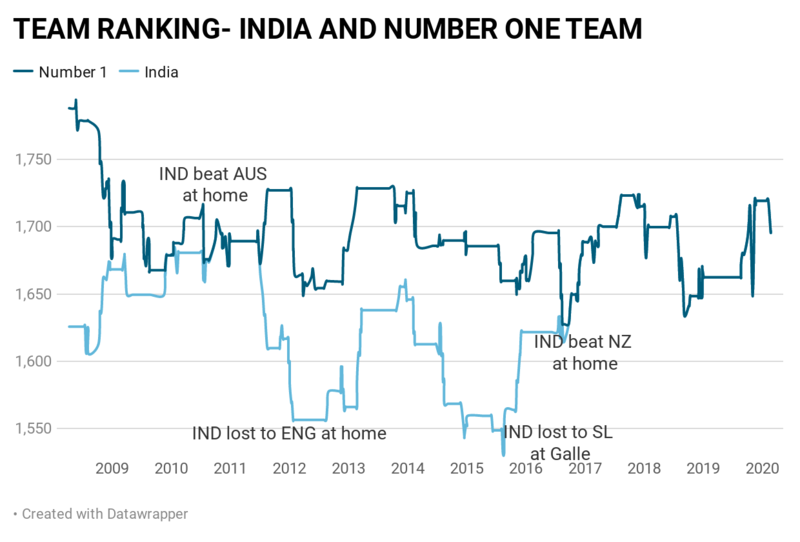 Those who remember Dhoni as a spinner’s captain will be surprised to know that Kohli leads 23 vs 16 in terms of matches when a spinner took the new ball. Spinners have bowled 31% of the overs under both captains in SENA countries while the number is only slightly higher under Dhoni (66% vs 61%) in Asia and the Caribbean.

Dhoni’s success through spinners across formats often makes everyone believe it to be his modus operandi and a reason for his failure in Tests in SENA countries. On closer examination, as a captain hindered by a diminishing batting competence and hampered by a plethora of inexperienced pacers, Dhoni’s hands were tied in the second phase of his Test captaincy. As the often repeated saying goes, a captain afterall is only as good as his team.