CPL 2022: A season of redemptions and unforeseen slumps

CPL 2022: A season of redemptions and unforeseen slumps

A crazy CPL season is at the cusp of its culmination. The points table has been turned upside down this season - Barbados Royals finished last in 2021 and sit at the summit this year. Meanwhile, Trinbago Knight Riders have slid to the last spot. The stage is set for a great final - between the Royals and Jamaica Tallawahs. But before, here is a brief look at how the season panned out for all the six teams:

Trinbago Knight Riders finished their campaign with a wooden spoon. Let that sink in. A consistent side that topped the league stage four times in the last five years? Adding Nicholas Pooran and Andre Russell to their roaster, they were deemed hot favorites to lift the trophy a record fifth time.

Alas, their sixth spot finish is one of the most shocking outcomes of this season. It is the first time this has happened and is as good as Chennai Super Kings’ campaign in 2020 or Mumbai Indians this year.

What went wrong? Their biggest stars just didn’t come to the party. No one among the likes of Pooran, Russell, Kieron Pollard and Colin Munro averaged over 20. Pooran averaged only 12 across nine innings while Pollard’s strike-rate languished under 100. Sunil Narine had better batting numbers. Russell averaged only 17 with the bat while leaking runs at an economy of 9.5 with seam-up deliveries. 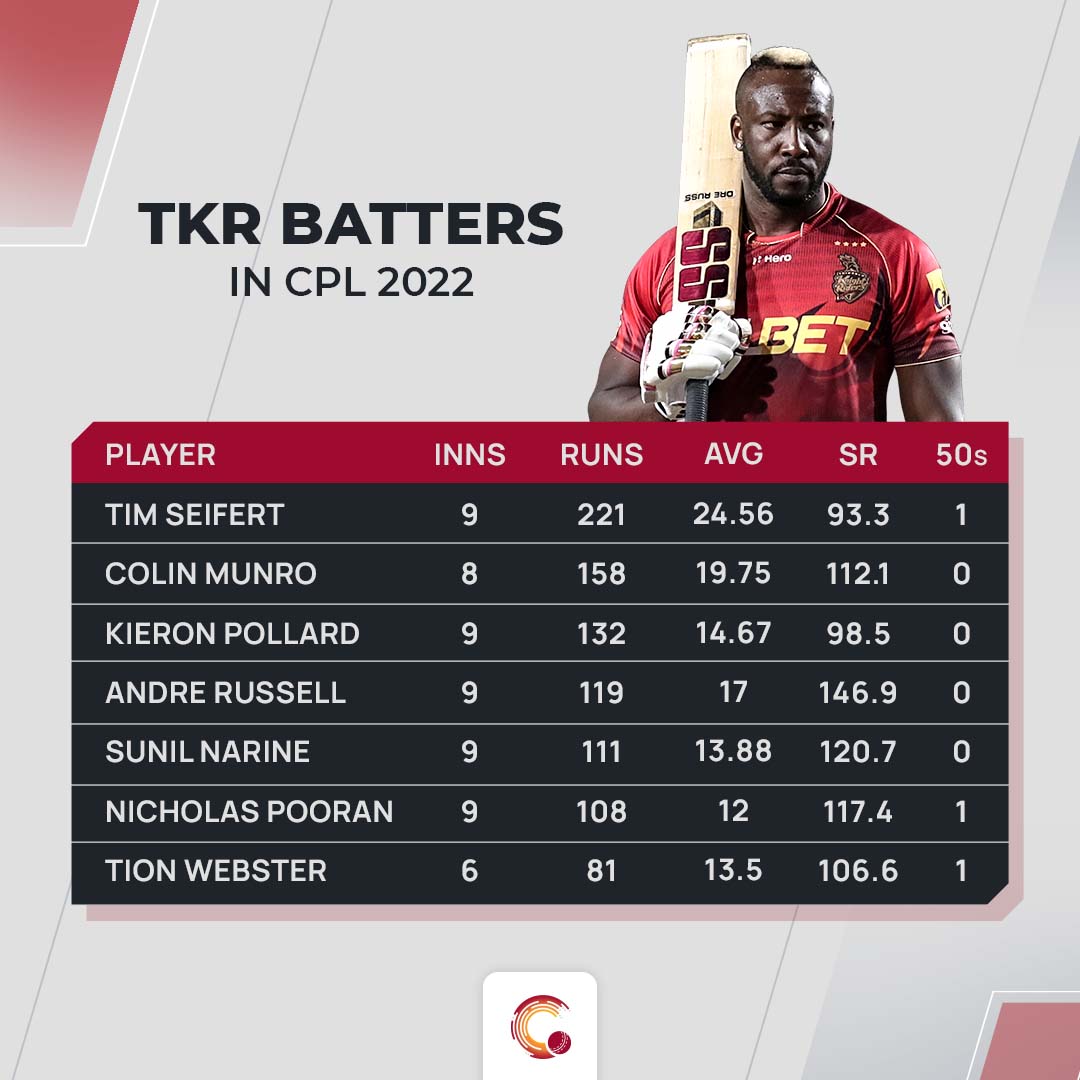 Besides, TKR made things tough for themselves with an atypical batting approach, leaving things until it was too late. They often started cautiously. At 6.6 and 20.7, they had the worst run-rate and average in the first 12 overs of the innings. The grand finish didn’t happen for them. It reflects in their run-rate of 7.6 in the last eight overs of their innings - the worst by a margin. It was a strange approach for a squad that had Russell and Pollard at six and seven.

Yet another poor tournament for Pollard raises doubts if we have seen the last of him in the CPL circuit as a player.

The defending champions finished second last. The stage was set for SKNP to have another grand season but like TKR, their stars came falling down too. And yes, by stars, we mean their high-profile players.

Evin Lewis played a major role in their title win last year - second on the run-scoring charts while striking at 163.2. This season, those numbers plummeted to 133 runs in seven innings - 24th on the run charts.

Pace was the kryptonite for the Patriots. With the bat, they averaged 15.9 against pace and while bowling seam up, they lingered at 31.2 runs per wicket - both worst by a distance. 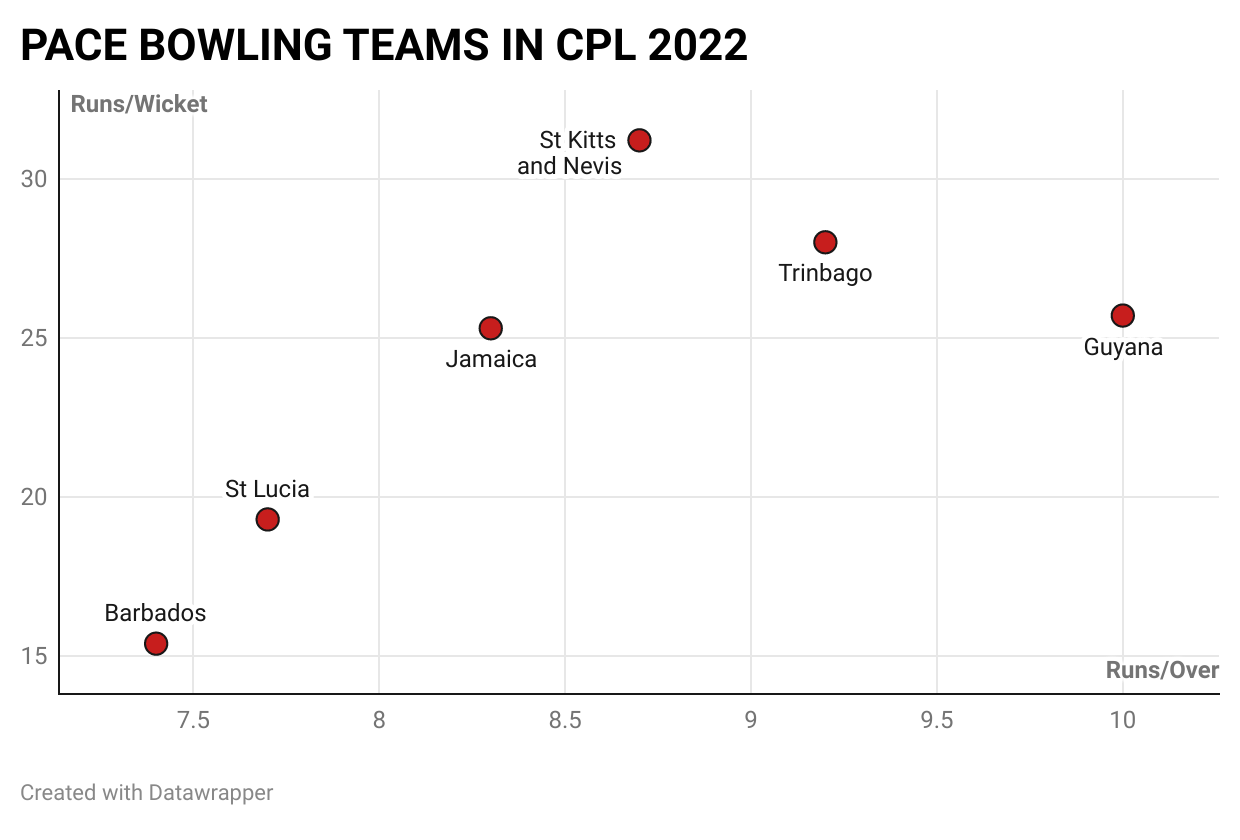 Facing pace, they tripped majorly post powerplay, averaging only 13.4. With the ball, the woes lied in the first six overs itself - only four early wickets at 52.8 runs apiece.

Their catching efficiency was also second from the bottom (74.4%). In the first two matches combined, the Patriots dropped five catches.

The runner-up last year,  St. Lucia Kings suffered a bumpy start to the season - losing four of their first five games. But four wins alongside a point earned from a washed-out game placed them at the third spot in the points table.

Prior to the final, the Kings have both the highest run-scorer (Johnson Charles 341 runs) and highest wicket-taker of the season (Alzarri Joseph 18 wickets). Then what went wrong for them?

Besides Charles and the skipper, Faf du Plessis, both of whom scored over 300 runs each, the next highest scorer for the Kings was David Weise at 126 runs. Similarly, barring Weise and Joseph, no one else maintained a ratio of more than one wicket per game. Scott Kuggleijn scalped six wickets in five games but an economy of 9.5 neutralized his efforts. Hence, the Kings were largely driven by their big players with little support from those around them. 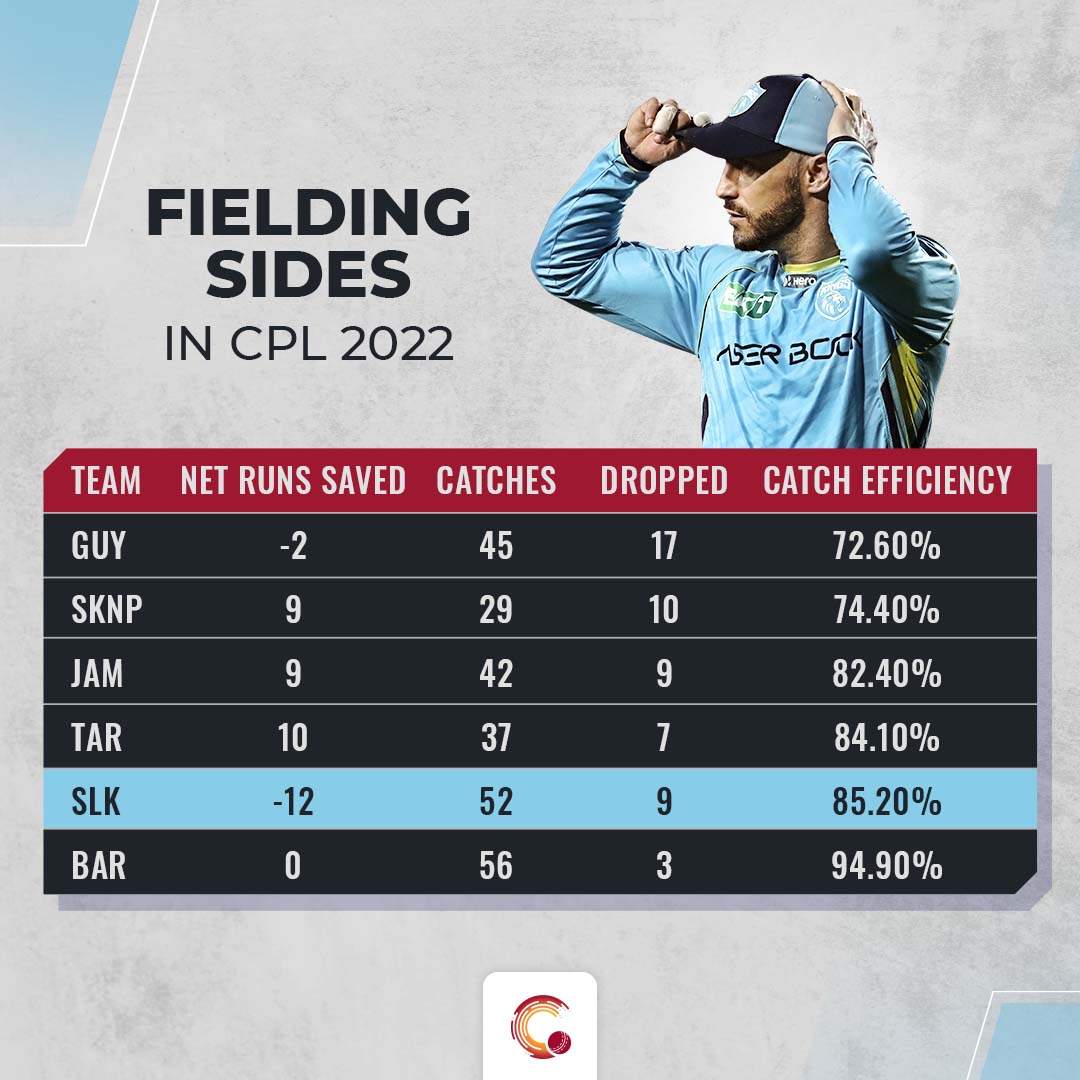 A prime example: In the game against Guyana when Wiese’s off day meant Joseph's 1/20 wasn’t enough for the Kings to defend 195.

Another title contender and another underperforming side. However, unlike the Patriots and the Knight Riders, Guyana picked up in the middle of the tournament. They won four games on a trot in the middle of the competition. The streak was engineered by a change in personnel.

Not that Heinrich Klaasen didn’t do well, but replacing him in the squad, Rahmanullah Gurbaz helped the Warriors score runs at the top, which was not happening with Paul Stirling out of form. Stirling scored only 15 runs in five innings with a highest score of 11. On a similar note, Tabraiz Shamsi picked eight wickets in five games at a run-a-ball economy but Shakib Al Hasan added all-round brilliance as his replacement. Shai Hope and Keemo Paul were surprise packages with the bat, chipping in with vital contributions.

However, Guyana’s biggest nightmare came true. They had no real pace in their seam attack. Romario Shepherd and Odean Smith have been exposed as T20 globetrotters over the last few months. Consequently, Guyana carried the most expensive pace attack of the season - going at 10 runs per over. 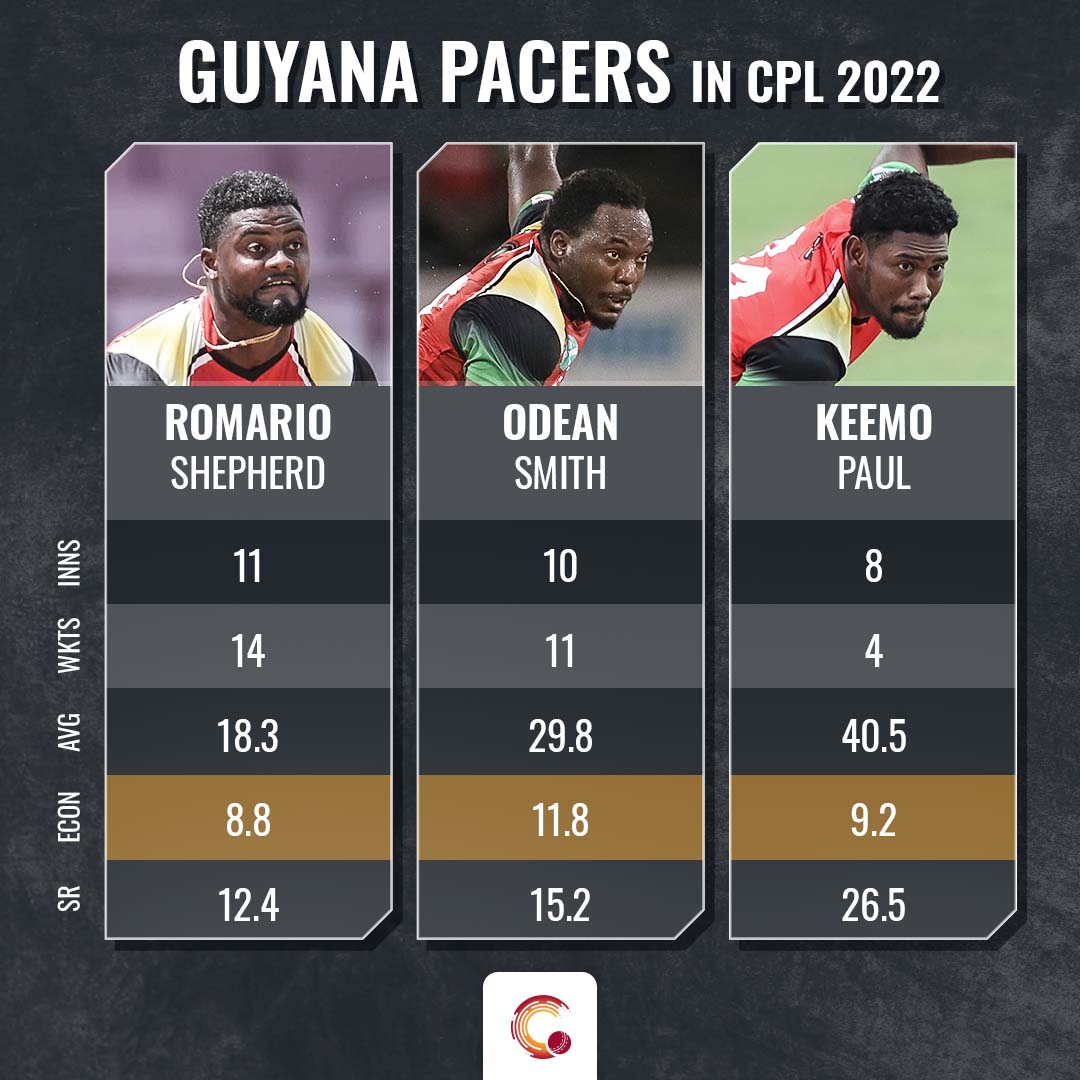 In Qualifier 1, they conceded 70 runs in the final five overs. In Qualifier 2, they were pasted for 103 runs at the death. Eventually, it was that one glaring weakness that took them down. Also, their highest run-scorer, Shimron Hetmyer didn’t bat at his optimal position - batting at five or six in eight out of 11 innings. It evidently cut down the returns from their most skilled batter.

Prior to the season, Jamaica were arguably the thinnest batting side on paper but found multiple heroes on the way through. Brandon King, Rovman Powell, Raymon Riefer, Shamarh Brooks all averaged 28 or more at decent strike-rates. King is the second-highest run-scorer of the season as yet with Powell and Reifer also making the top 10.

The bowling stars have largely justified themselves. Mohamad Amir and Imad Wasim have picked 16 wickets each whilst maintaining an economy under 6.5. Heading into the final, the Tallawahs would be thrilled that their replacement player, Mohammad Nabi (replaced Sandeep Lamichhane) has struck form. In the Eliminator, Nabi struck an unbeaten 31 off 15 balls with the bat before picking 3/10.

It is astonishing that their best season in a long time has come after the bidding adieu to the biggest local stars - Chris Gayle and Andre Russell. After six years, the Tallawahs are in the hunt to add another trophy to their cabinet.

Barbados Royals had the quality for a stellar comeback season and coming back from any match situation for that matter. In a couple of examples, they scraped through against Guyana after being 68/6 in 14 overs. Against the Patriots in another game, they picked up from 61/2 in 13 overs to register a 36-run win.

Before these two games, the Royals had already booked a spot in the playoffs with six wins in a row. They have had more heroes than any other side. Jason Holder, Kyle Mayers and Corbin Bosch added all-round brilliance to the side. Mujeeb Ur Rahman has been invincible throughout the season while Quinton de Kock, David Miller, Azam Khan and Harry Tector have played timely knocks.

Talking about timely performances, you cannot overlook Rahkeeem Cornwall’s beast of an all-round show in Qualifier 1. Having scored only 115 runs throughout the league stage, the big man hammered 91 off 54 balls with 11 sixes before snaffling 2/10 with the ball.

Scoring at a run-rate of 8.4 while averaging 32.8 and bowling at an economy of 7.3 at 13.1 runs per wicket - they have been both the best batting and bowling side in the tournament on all major metrics.

The Royals will continue to miss their South African core in the final but have enough match-winners to make up for the absence. And overpowering them will be the biggest challenge for the Tallawahs.