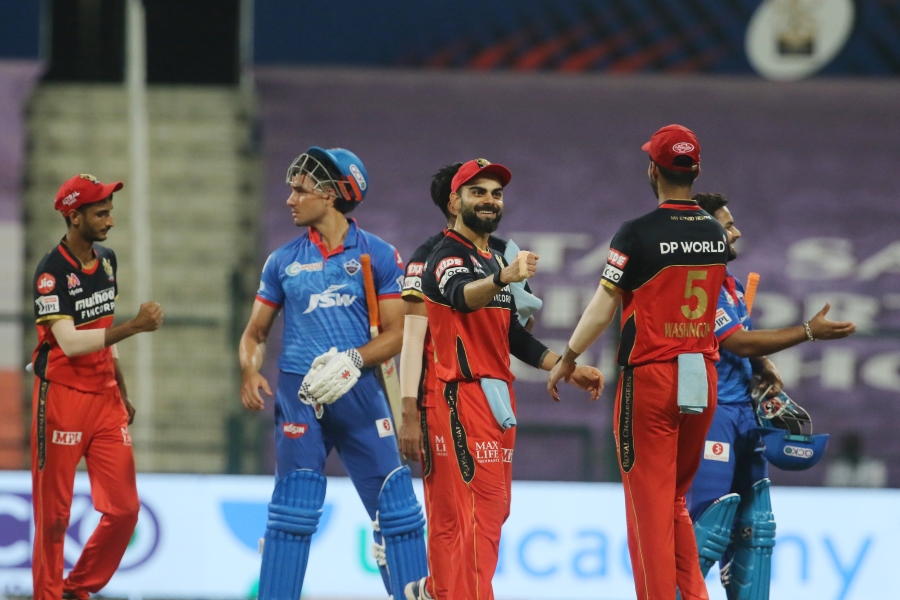 There were smiles in both camps. Royal Challengers Bangalore might have lost four matches in a row, Delhi might have snapped their four-match losing streak. But both Shreyas Iyer and Virat Kohli wore a relieved look as despite a Delhi win, both sides qualified for the playoffs.

After an insipid show in the last few games, Delhi came out with a plan and executed it to perfection. The bowlers led by Anrich Nortje and Kagiso Rabada restricted Bangalore to 152/7. The equation was clear for both parties after this. Delhi had to push beyond 134 and Bangalore had to stretch the game to at least 17.3 overs.

Shikhar Dhawan and Ajinkya Rahane made sure breaching 134 was never a problem as they both struck half-centuries to take their side to a win in 19 overs. With this win, Delhi finish on No.2 on the points table and will meet Mumbai Indians in Qualifier 1, on November 5. Bangalore though will have to wait for the SRH-MI clash to see who they meet in the Eliminator. 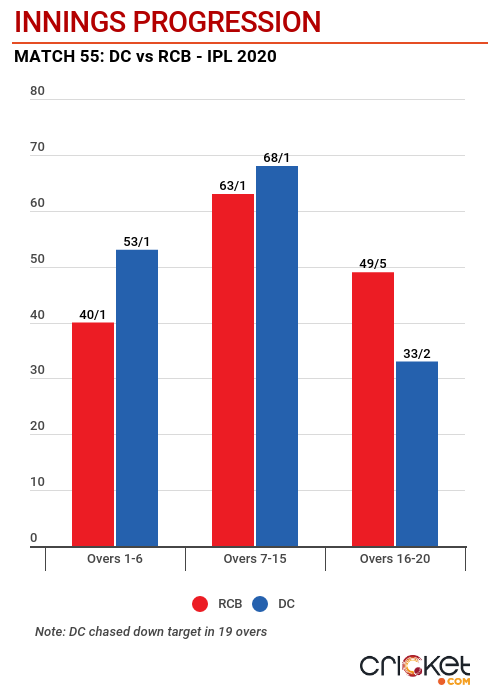 Delhi and Bangalore start off sedately

Earlier, Delhi chose to field first and the importance of the game got clear right from the start with both teams being circumspect. Daniel Sams started off for Bangalore keeping in mind that left-arm pacers have done well in Abu Dhabi. Although he did not pick up a wicket, Sams conceded only 10 runs off his first 2 overs.

While Delhi had kept the RCB openers in check, the wickets still did not arrive. Kagiso Rabada had bowled 18 overs in the Powerplay so far this season and hadn’t picked a wicket. That changed first ball of the fifth over. A good length delivery was lofted by Joshua Philippe but he did not get the distance and Prithvi Shaw took a good catch running backwards.

Bangalore scored 40 runs in the Powerplay but lost just one wicket.

Bangalore’s Achilles Heel comes back to bite them, again

The middle overs have been Bangalore’s Achilles Heel all through this season. Prior to this game, they had the lowest run rate between overs 7-15, that of 6.9. Today they scored at 7 runs per over.

Padikkal started off the 7th over by cutting Ashwin past point for a four. The next three overs there wasn’t a boundary hit and the pressure got to Virat Kohli. In what could have been the defining moment of the match, Kohli stepped down to Axar without reaching the pitch of the ball. He mistimed it straight to the hands of Nortje, who made an absolute mess of the catch at long on.

Kohli still looked rattled even though he cracked Rabada for a four followed by a six off Axar. Soon after, Ashwin who had never dismissed Kohli in T20s claimed the prised scalp. Tossed up slower in the air, Kohli came down the track looking for an ugly slog. He did not reach the pitch yet again and Marcus Stoinis claimed a good catch at deep midwicket.

Bangalore only managed 3 fours and 1 six in the middle overs. Padikkal reached his half-century and in the process also became the sole owner of the most runs scored by an uncapped Indian in his debut season, going past Shreyas Iyer. 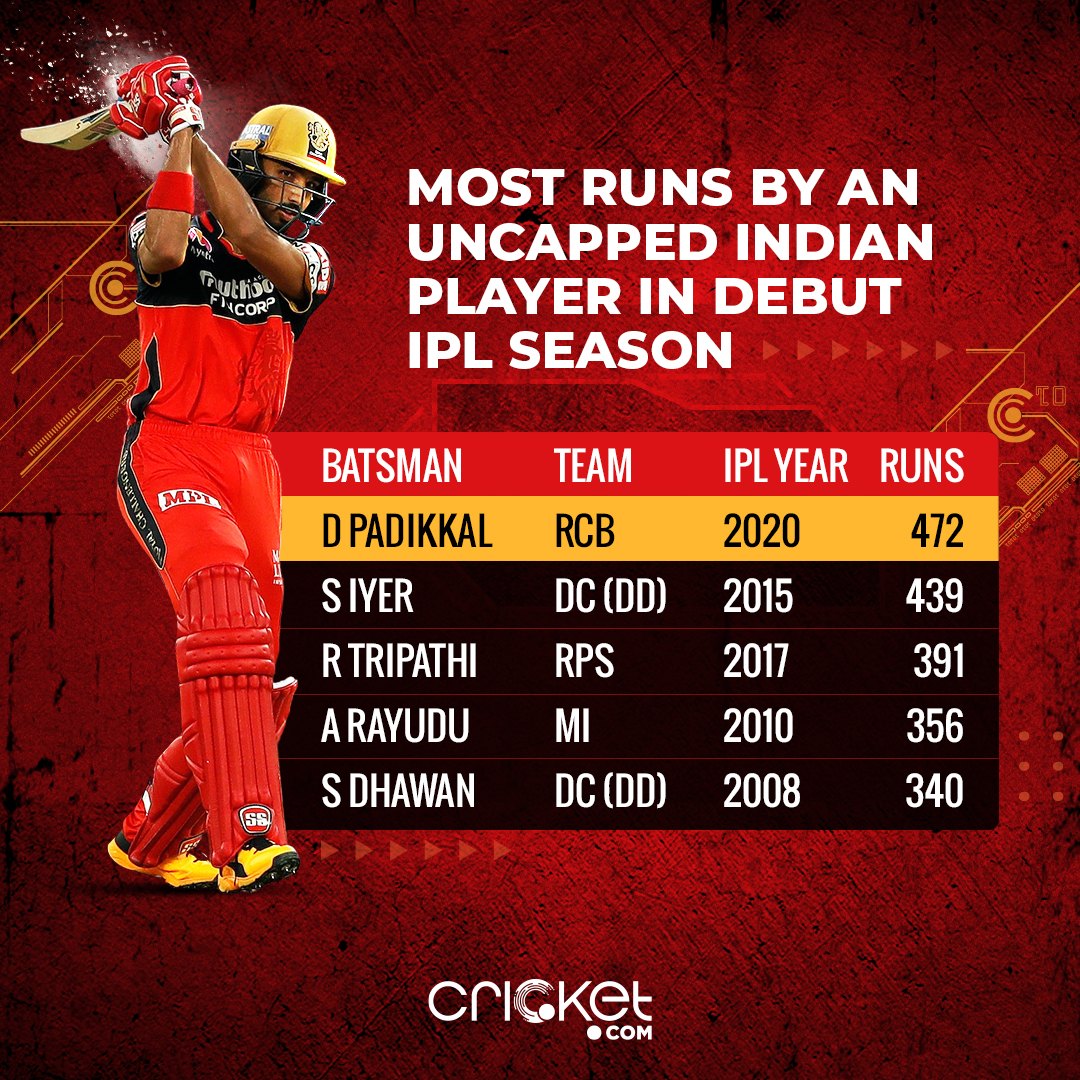 At 103/2 after 15 overs, Bangalore were desperate for a late surge and they had the right man at the crease – AB de Villiers. The South African decided to go big right from the start of the 16th over as he tonked Nortje for a six over mid-off. However, it was the bowler who roared back. Nortje first castled Padikkal with a 152kph bullet for 50 and two balls later got rid of his countryman, Chris Morris, for a duck.

Rabada conceded just 5 runs of the 17th over but Sams’ last over travelled the distance. De Villiers first thrashed him wide of long off before Shivam Dube got into the boundaries, smoking Sams for a six and a four. Rabada was then dispatched miles over deep square leg by de Villiers before the pacer got rid of Dube off his final delivery of his spell.

Nortje bowled a fantastic final over conceding just 7 runs. The big difference was made by de Villiers’ run out who going for a second run was found short of his crease. Bangalore scored 49 runs for the loss of 5 wickets in the last five overs eventually reaching a below par score.

A good start is all Delhi required to get ahead of the chase and they certainly got that courtesy Shikhar Dhawan. The southpaw was coming into the match on the back of two successive ducks and would have hoped for some sort of respite. He started confidently with Morris offering him a couple of gifts. A short and wide delivery was first spanked through covers before he once peppered the off side field on the front foot.

Prithvi Shaw then got into the act as he got a couple of gifts from Mohammed Siraj on the pads that found the boundaries with ease. However, it was Siraj who had the last laugh. Getting one to pitch on a length on middle stump, the pacer got the ball to move ever so slightly which beat Shaw on the defence and left his stumps in a mess.

Dhawan was joined by Rahane in the middle and the two played out the Powerplay overs well as Delhi reached 53/1 after 6 overs. 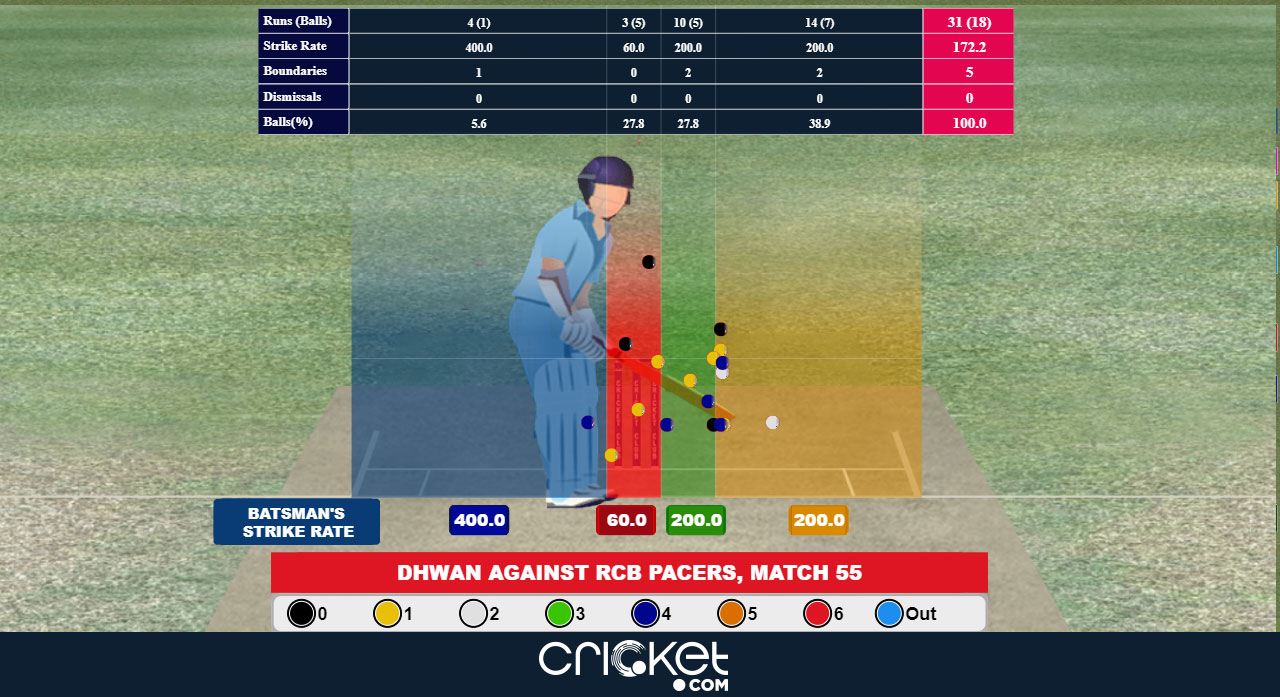 Both teams end with a smile

Delhi’s middle phase went on a similar note. Rahane got the sweep out early to Yuzvendra Chahal and bisected the gap between square leg to deep midwicket to perfection. What both Dhawan and Rahane were doing well here was looking for a boundary an over and then rotate the strike.

Chahal was pumped away by Dhawan as the runs kept flowing. A tickle past fine leg brought up Dhawan’s half-century, which he celebrated by another couple wide of point.

Rahane then got into the act as he clobbered a slower, short ball outside off stump over covers and followed it up by thumping Shahbaz Ahmed straight over long off’s head.

Delhi were milking the runs and completely against the run of play, Dhawan fell on 54. Going for a cute fine sweep, Dhawan hit the ball a little too well and Dube at short fine leg completed a simple catch.

While 17.3 was the magical number, Delhi never really looked like going for the chase hard. Both Iyer and Rahane milked the singles with the latter reaching his half-century off 37 balls.

It seemed there would be a late twist of sorts. Iyer fell going for an expansive shot on 7 while Rahane was dismissed on 60 off 46 going for a needless reverse sweep.

However, Marcus Stoinis (10*) and Rishabh Pant (8*) ensured there were no more causalities as Delhi romped home with an over to spare.