Determined Netherlands out to make an example out of Bangladesh 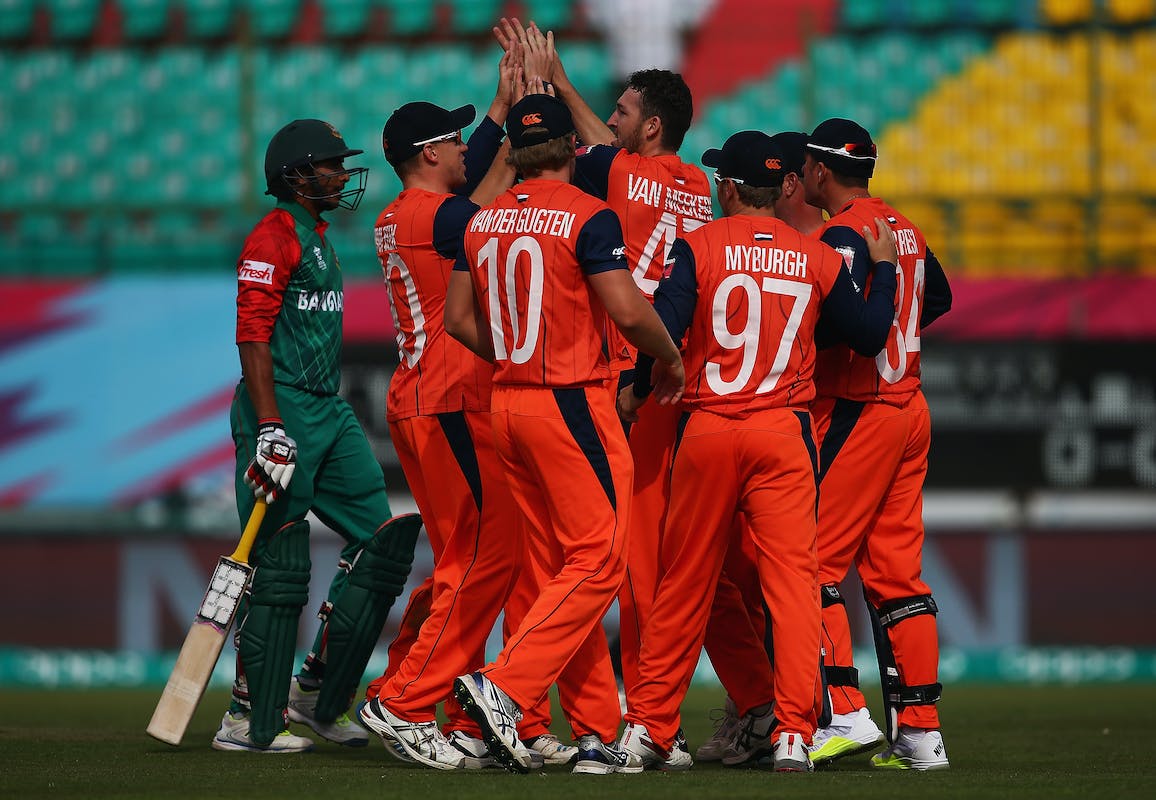 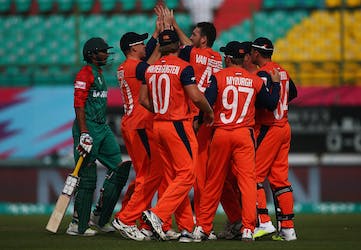 Determined Netherlands out to make an example out of Bangladesh

Having made a direct entry to the Super 12s, the Shakib Al Hasan-led side will hope to get off the without any hiccup

Considered to be the best associate nation to ever play the game, the Netherlands have had their ups and downs over the last few years. From winning the World Cricket League (WCL), which gave them the right to compete in the ODI Super League, winning the T20 Qualifiers in 2019 to plummeting to their lowest of lows with their performance in the T20 World Cup 2021, that included being bowled out for 44 against Sri Lanka.

However, with plenty of fixtures under their belt since that disappointment, the Netherlands have turned a corner. Their progress to the Super 12 of this edition came down to the wire, but now that they are here, they will not certainly hope to go down without a fight.

They come up against Bangladesh, who play their first game of the competition, for whom T20 cricket is not their strongest suit. In the 19 matches played since the end of last year’s World Cup, Bangladesh have managed to win just four – with two of them coming against the UAE in September – the other two against Afghanistan and Zimbabwe.

They go into the World Cup after losing all their four matches in the tri-series in New Zealand that also included Pakistan. That is certainly not an ideal preparation result-wise, but certainly better than last year when they went into the tournament with false sense of superiority at the back of series wins over Australia and New Zealand on lifeless tracks in Mirpur.

Could be the perfect opportunity for Netherlands to register their first T20I win over Bangladesh in a decade.

Who will be key for the Dutch?

The fast bowling duo of Paul van Meekeren and Fred Klaasen have been stand out performers for the Dutch. Van Meekeren showed in the game against Sri Lanka that his pace can trouble even the best of batters and if he can crank it up against Bangladesh, they too could have a tough time. Not to forget, Klaassen’s left-arm pace will also come in handy, especially against Bangladesh, who have struggled against this bowling type, losing a wicket every 21.4 runs, 17.1 deliveries apart in T20Is since 2020.

Max O’Dowd has been outstanding for them across the last two World Cups so far. His unbeaten 71 off 53 against Sri Lanka came at just the right time and he will be key in carrying the Netherlands flag high. He is unfazed by big tournaments; given that he has scored 252 runs at 50.4 to go with a strike-rate of 119 with three fifties across the last two T20 World Cups.

The same cannot be said about the rest of the batters, who have not provided O’Dowd with the support he would have sought.

One of the ways that potentially can improve is if runs start flowing off Bas de Leede’s bat.

The all-rounder claimed the player of the series award in both the wins Netherlands have achieved in the tournament and will once again be key in their quest to get off the mark in the Super 12s. He has had as good a year as any in T20Is this year with both bat and ball having hit 347 runs at 57.8 and has impressed with the ball as well having picked up 17 wickets at 10.3 in 2022.

Roelof van der Merwe’s injury could pave way for young leg-spinner Shariz Ahmad to make the XI. The 19-year-old has picked up six wickets from seven T20Is for the Dutch at an economy rate of 6.77. It may also not be a bad idea to being Logan van Beek back into the XI in place of Timm van der Gugten, who has leaked runs in the last two matches, often letting the batting team off the hook. In Van Beek, you not only have a bowler who can bowl well in the middle and death, but also someone who can hit a few out of the park as well.

Runs have been at a premium off Colin Ackermann and Tom Cooper’s bats. They’ve managed just 47 runs off 63 deliveries between them and the Netherlands would love for them to make valuable contributions in the middle-order.

Bangladesh captain Shakib Al Hasan’s performance in the last two T20Is has put him in good stead going into the tournament. He slammed a 42-ball 68 against Pakistan and before that scored 70 off 44 against New Zealand in Christchurch. While three and four are his best position, Shakib came out to bat at seven in one of the games in the New Zealand tri-series.

Over 1,800 of his 2,199 runs have come when he has batted in those positions and there’s no reason for him to bat anywhere below that. Not to forget what he brings to the table with the ball. He has 19 wickets at an economy rate of 5.7 in the middle phase in T20Is since 2020. He has also put the choke on when it comes to bowling to right-handers. Having scalped 23 wickets at 6.2 runs per over.

Given that the Dutch have just one left-handed batter in their line-up, Shakib should ideally have a field day with the ball.

While Shakib’s all-round’s prowess will be a key factor, Litton Das’ contribution too will be equally important. He has 417 runs at a strike-rate of 140 in T20Is this year and once set, he is a dangerous bowler to bowl to. 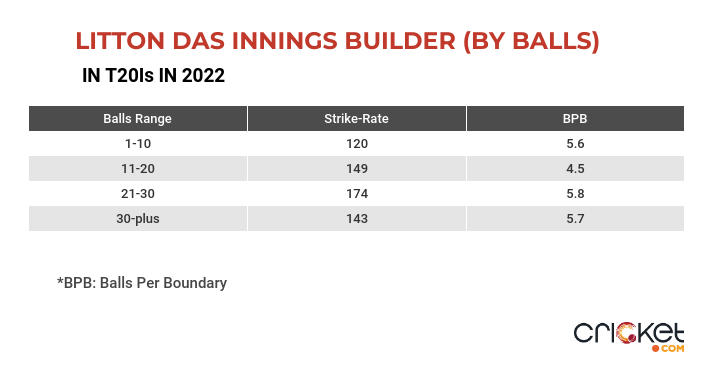 As is the case with Afif Hossain, who we at Cricket.com picked as Bangladesh’s tactical MVP for the T20 World Cup. Once he plays the first 10 deliveries, getting rid of him will be an uphill task for the opposition. He scores at a consistent rate throughout the innings and could be an ideal batter to occupy the No. 4 spot, where he has scored 300 runs in 10 innings. 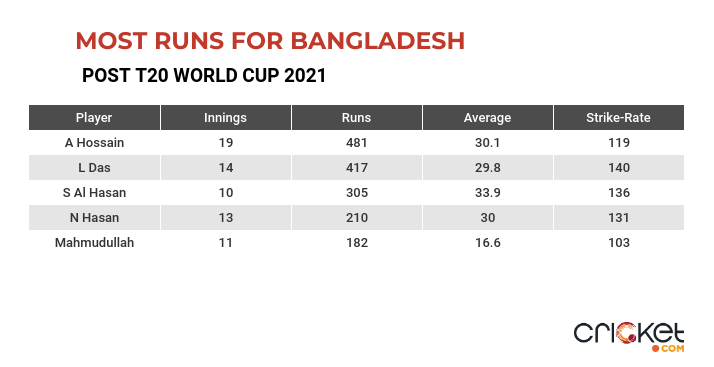 Mustafizur Rahman was Bangladesh’s best bowler in 2021 with 28 wickets, but has struggled to get going this year, having picked up just eight wickets in 11 innings. The main concern for him has been his performance at the death, where he has conceded at nearly 11 an over. Moreover, he has struggled against left-handers against whom he has just a couple of wickets at 51.5 and an economy rate of 9.7.

Bangladesh would hope that he comes good in this edition of the T20 World Cup – a tournament in which he picked up eight wickets – last year.

Left-arm seamers at the Bellerive Oval have the worst runs per wicket (31.8) balls per wicket (24.3) ratio in this edition of the tournament, which are not good signs not just for Mustafizur, but could also prove pivotal for Netherlands given they have Klaassen up their ranks.

T20s has not been Bangladesh’s strongest suit over the years. Plus with three of their most experienced players in Tamim Iqbal, Mushfiqur Rahim and Mahmudullah absent from the tournament for various reasons, it makes their task even tougher but at the same time provides an opportunity for a few to prove their credentials.