Paul van Meekeren: Playing India and Pakistan will be special 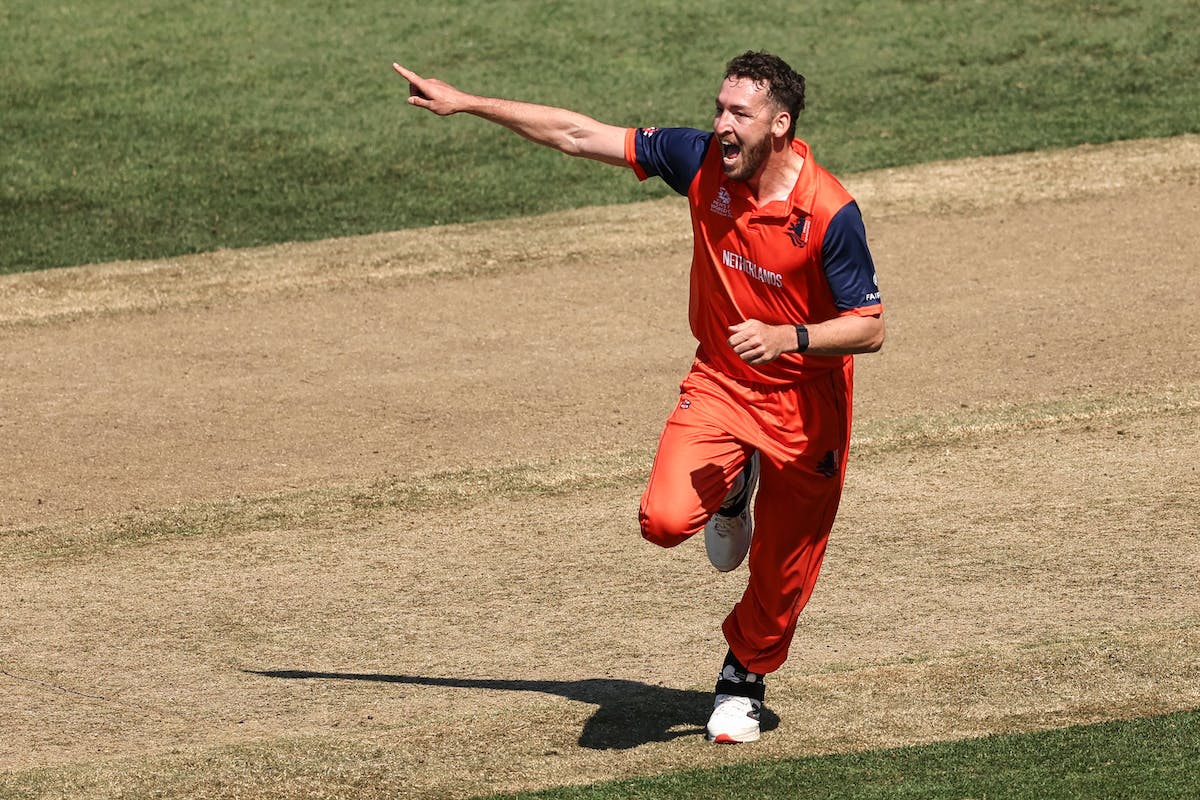 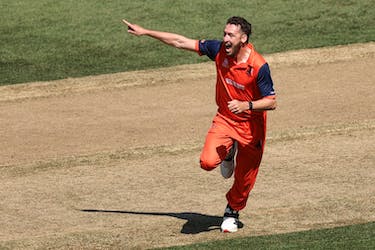 Paul van Meekeren: Playing India and Pakistan will be special

The Netherlands pacer, who is also one of the quickest in the tournament, will look to ruffle a few feathers in the Super 12s

With two wins in three games in the first round, the Netherlands made it through to the Super 12 stage of the T20 World Cup 2022, but it was not without some drama. Their chances of making it through depended on the outcome of the UAE-Namibia clash, which fortunately went in their favour as UAE walked away with a seven-run win.

“We watched the first innings and the second powerplay at the ground. Up till the 18th over of the UAE innings, I thought they were going to be light on runs. But getting close to that 150 mark gave us confidence,” Paul van Meekeren said in a chat with Cricket.com.

“It’s been hard to chase this tournament so that gave us a bit of confidence to. We know David Wiese very well as he’s played in the Dutch league for many years. We know as long he was in it was going to be a close game.”

Chasing 149, Namibia looked down and out when they were reduced to 69 for 7 in the 13th over. However, Wiese (55) found an unlikely ally in Ruben Trumpelmann (25*) and the duo stitched together of 70 in seven overs to give their side a chance. But when Wiese holed out with 10 needed from three deliveries, it was curtains for Namibia, who had lit up the tournament with a comprehensive win over Sri Lanka earlier.

“I didn’t know that the result was till messages from friends and my girlfriend came in. I went back to me room with eight balls to go. I think after being disappointed from the Sri Lanka game it was more relieving than anything else knowing that we have gone through to the super 12’s,” van Meekeren added.

Speaking of the game against Sri Lanka, the Netherlands would not have needed a favour from UAE had they beaten the Asia Cup winners. After a quiet powerplay, Van Meekeren first rattled Pathum Nissanka with a fiery in-swinger and then rapped Dhananjaya de Silva on the pads to get him out leg-before off the very first ball. 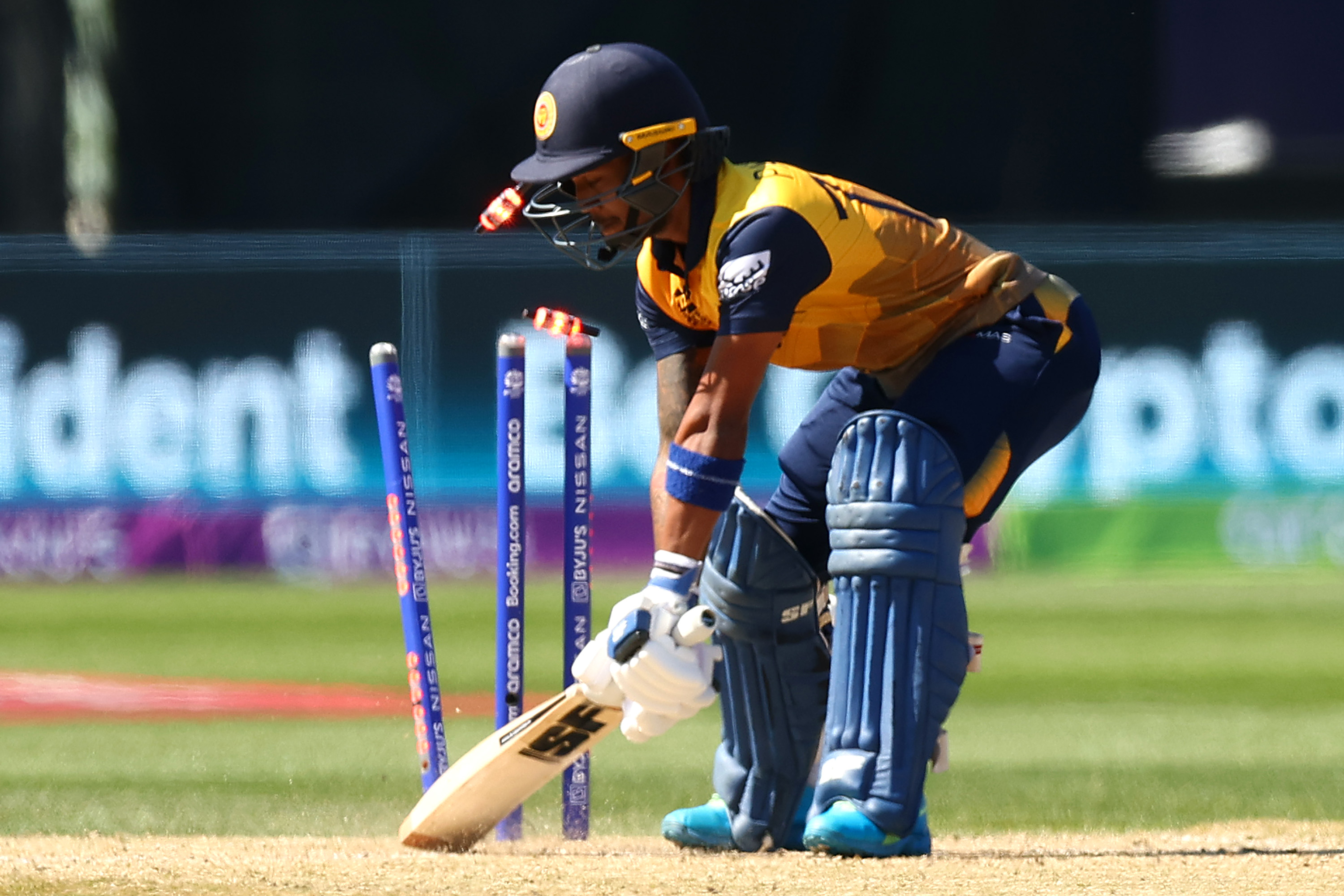 Van Meekeren has been one of the fastest bowlers in the tournament thus far, constantly clocking over 140KPH, keeping the batters on their toes.

“I’m just very happy that I can contribute to our bowling attack. We got so many different kind of bowlers who offer different skills. It’s good to see that the pace is up but if we don’t win games it doesn’t matter,” van Meekeren, who finished with figures of 2 for 25 against Sri Lanka, said.

“My rhythm and speed is up probably from the work I’ve done with Robbie Joseph [Former Kent fast bowler]. I worked with him for a couple months at Gloucestershire and even changed one or two things in the week before I left for Australia and I’m pretty sure that’s has helped me personally to succeed here so far,” he further explains.

Sri Lanka still managed to set the Dutch 163 and despite Max O’Dowd’s attacking 71* off 53, the Netherlands fell short by 16 runs in the end.

It’s no secret that the Dutch would have been highly disappointed to have not made it through to the Super 12s last year. That was down to the lack of game time they got ahead of the tournament, largely due to the travel restrictions that came along with COVID.

This time around though, they have had plenty of matches leading up to the tournament, including bilateral fixtures against West Indies, England, New Zealand and Pakistan. Amid all this, they also played the T20 World Cup Qualifiers, where they finished second only to Zimbabwe. Playing competitive sides on a regular basis throughout the summer has certainly helped them get rid of any rustiness they might have had going into the tournament and it was clearly visible.

The Netherlands start their Super 12 campaign against Bangladesh on Monday (October 24), followed by games against India, Pakistan, Zimbabwe and South Africa.

Van Meekeren says he is looking forward to playing India and Pakistan in the World Cup given the massive following they have. Also, they fell just nine runs short of beating Pakistan in the last fixture before the T20 World Cup is certainly an added incentive.

“Well, I think India and Pakistan will be special with the following they have around the world. I think there are a few teams in the group we can turn over. The boys were close in beating Pakistan in a 50 over game last summer and there is no reason we can push them in a different format,” van Meekeren, who is playing in his third T20 World Cup, said. 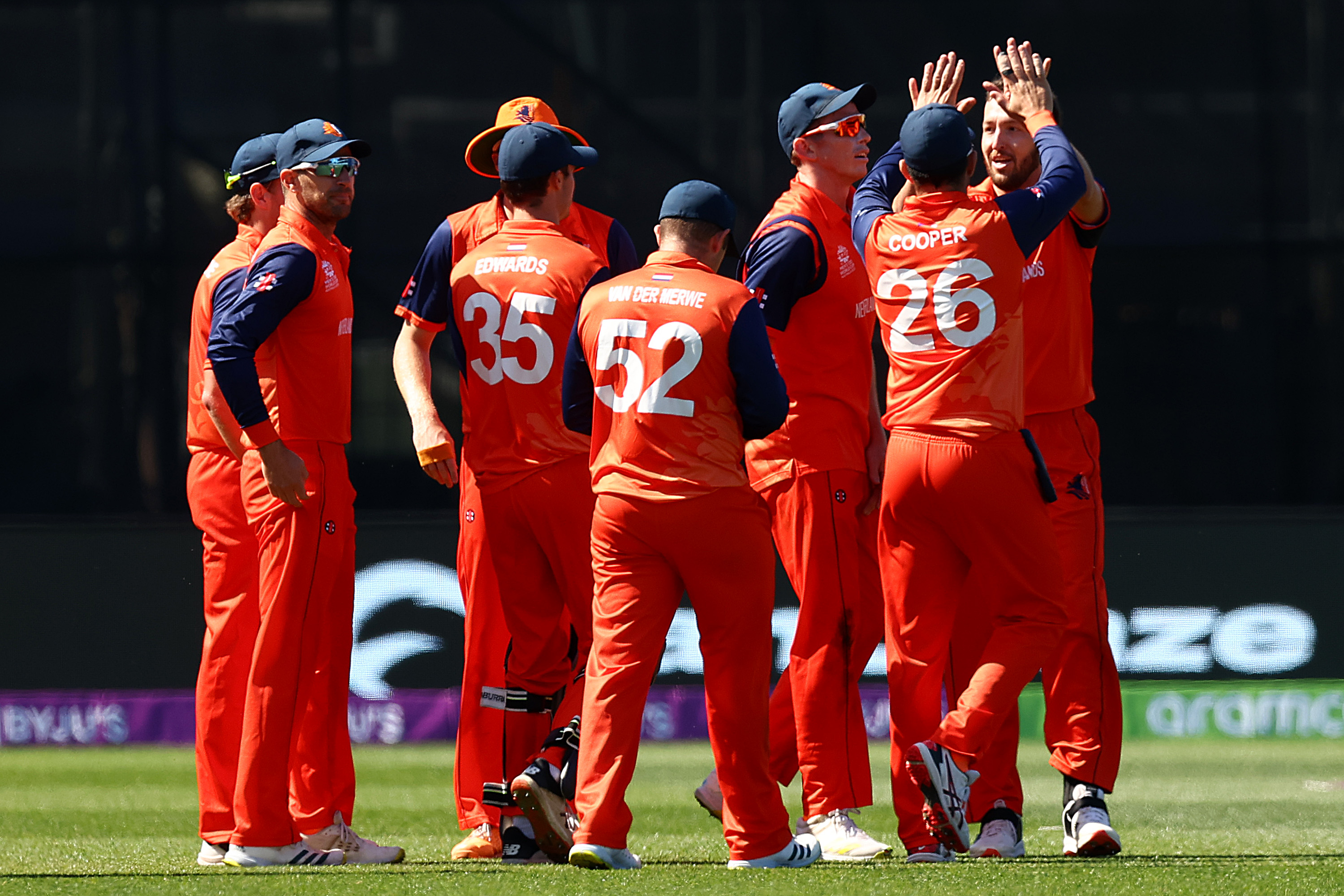 The World Cup started with four associate teams but the Netherlands are the lone side that have stayed alive in the tournament. Is there any added pressure? Van Meekeren certainly doesn’t think so.

“There is no extra pressure I think. Personally, I feel there is less pressure. I feel the pressure to qualify for the actual World Cup [super 12s], even all the commentators over the last couple weeks called this group stage, a qualifying round and not a World Cup stage,” van Meekeren explains.

“I think with the results we’ve seen, all associates deserve to play against the big teams. [The experience] was a lot bigger then the results for the next 5 games. It’s time for us now to enjoy the experience and when we enjoy these moments we tend to perform just that little bit extra.”

The Dutch are perhaps more well-settled than they have ever been in any global event. There are still players like Stephan Myburgh, Brandon Glover, Teja Nidamanuru who have not played a game yet, further showing the depth Netherlands possess. Having crossed the first round, it will not be a surprise if the Dutch do manage to push a couple of teams to the brink and even get over the line on more than one occasion